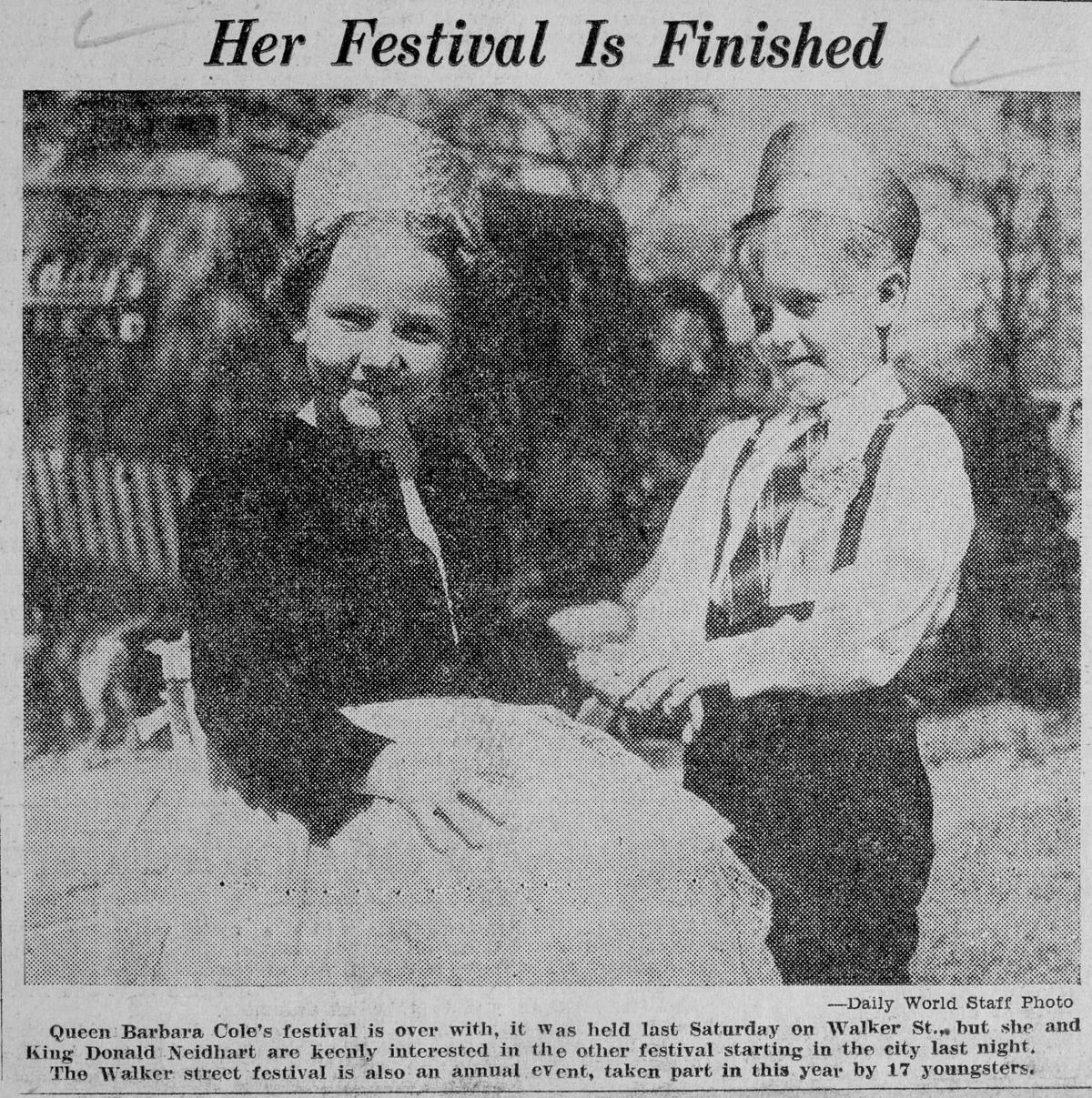 Queen Barbara Cole and King Donald Neidhart led a festival parade of children along Walker Street in 1940. The parade was an annual event in the neighborhood. 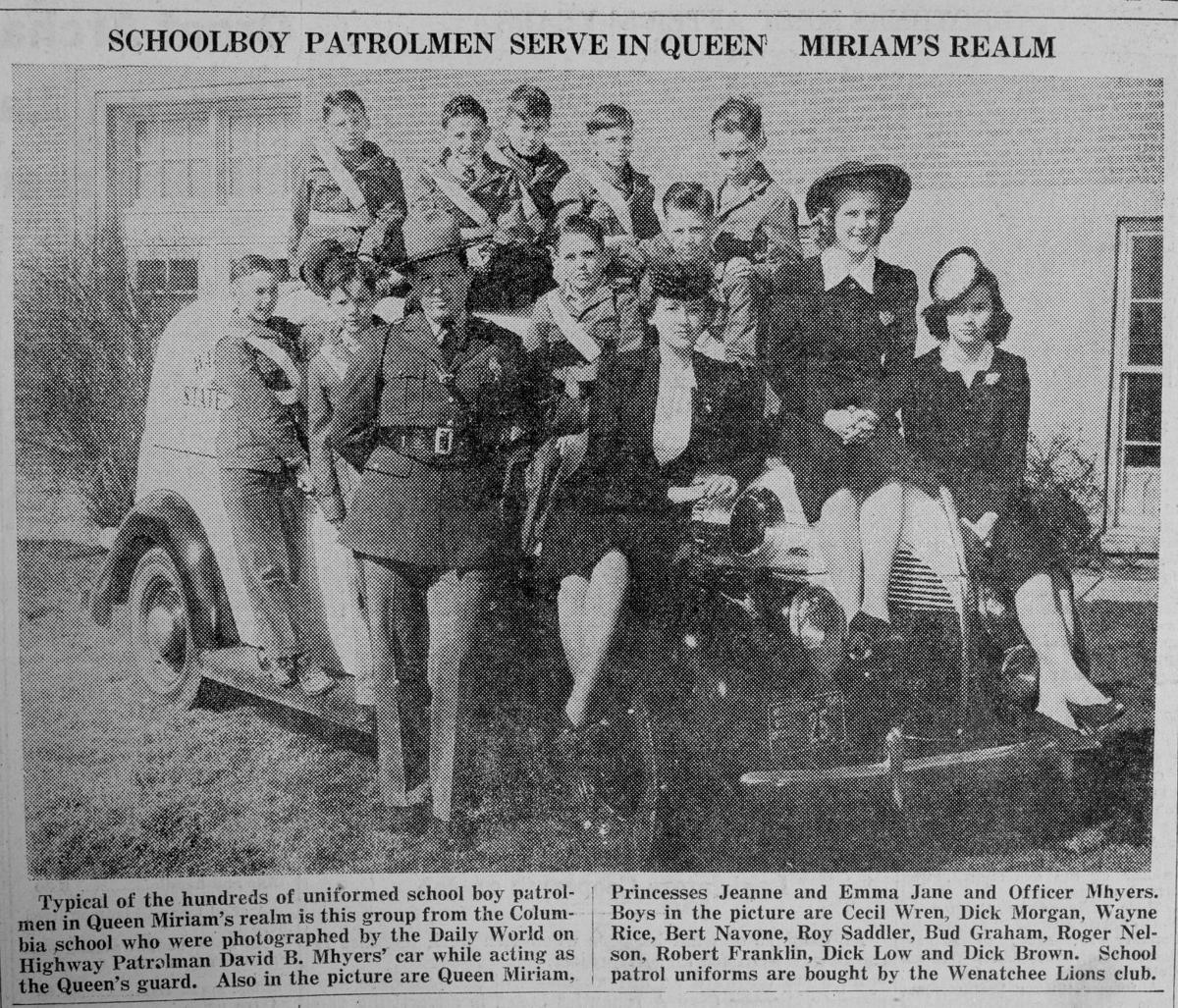 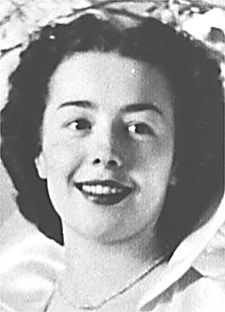 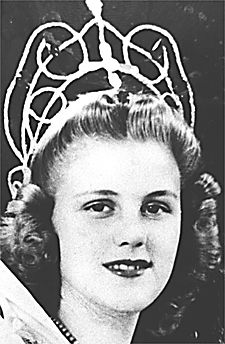 Queen Barbara Cole and King Donald Neidhart led a festival parade of children along Walker Street in 1940. The parade was an annual event in the neighborhood.

♦ The royal court rode in a baseball parade in Seattle marking the opening of the season. They attended a game and sat in a special box. Queen Patricia was introduced and invited the crowd to attend the festival.

♦ Camp Fire Girls took over the town April 13 to sell apple blossoms, made by the organization’s guardians. A portion of the profit went to the festival committee to defray expenses with the remainder to the Camp Fire Girls to go towards summer camp. Mildred Naughton led the efforts.

♦ The festival officially opened with a trumpet call, sounded by Hazel Hobson and June Palm, Wenatchee High School musicians. Ed Ferguson was the speaker at the program paying tribute to pioneers.

♦ Wenatchee Junior High School’s float, with its interpretation of King Apple and his royal court, drew the most attention in the school parade.

♦ A novelty program was planned by Marjorie Reid. Her dance students, ranging in age from 4-18, presented a program that included tap, ballet and acrobatic numbers. The finale was a patriotic number, “Dance of National Defense.”

♦ One of the many entries in the grand parade was that of Holden’s “Mountain of Copper,” with Princess Carol Henderson.

♦ Secretary of State Belle Reeves and Mayor and Mrs. C.T. Haskell were among the honored guests at the queen’s ball. Performers included the Kilowatts, a quartet with Jack Brownlow, Chloe Watkins, Zeke Watkins and Yvonne Watkins.

♦ The royal court visited Washington State College in early April and were greeted by four former festival queens who were students there. They were Jean Driver, 1937; Lois Jo Strong, 1938; Lois Ross, 1939; and Patricia Clapp, 1940.

♦ J.H. O’Neill was chairman of the Apple Blossom button campaign. Returns from the button sales amounted to about one-fourth of the cost of the festival.

♦ A photo of three local girls alongside a new 1941 Dodge custom luxury liner cabriolet with an orchard of blossoms in the background was published as a promotion for Valley Auto Company, 210 S. Wenatchee Ave. The three were Norabelle Roth, Martha Jane Bowers and Jean Stockstill.

♦ Another Apple Blossom “parade” was held prior to the real thing. The ninth annual Walker Street Parade had 25 children participating along with royalty. Queen was 8-year-old Jacqueline Johnson. Princesses were Ann Farrington, 5, and Betty Lou Baker, 5. The real Apple Blossom royalty were honored guests.

♦ Sports took more of a role during the festival with swimming at Hughes Memorial Pool, archery championships at Pioneer Park, tennis championships at the city courts, a five-team track meet, and baseball between the Wenatchee Chiefs and the University of Washington.

♦ Theme of the grand parade was “Appleland on Parade.” Sweepstakes winner was Safeway stores.

♦ Gov. and Mrs. Arthur B. Langlie were honored guests at the queen’s ball.