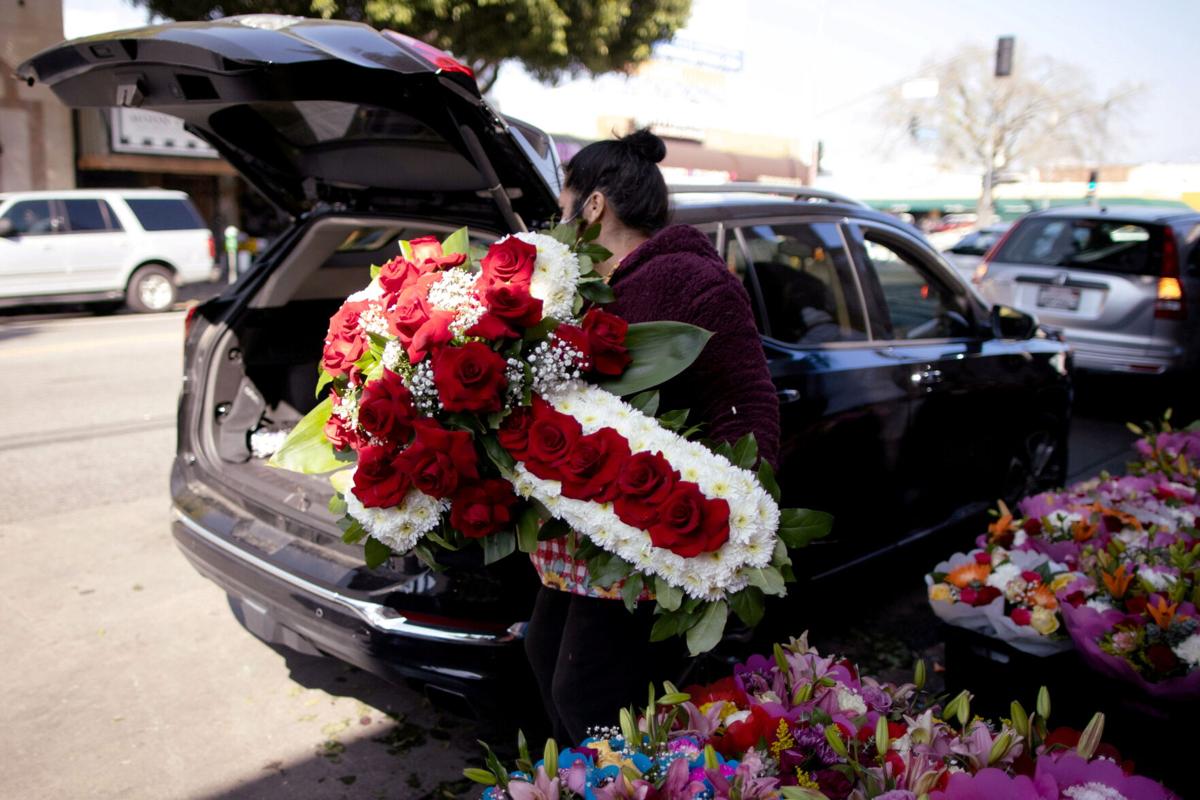 A woman lifts a funeral display into a car in the flower district as the coronavirus disease (COVID-19) outbreak continues, ahead of Valentine's Day in Los Angeles, Calif., last week. 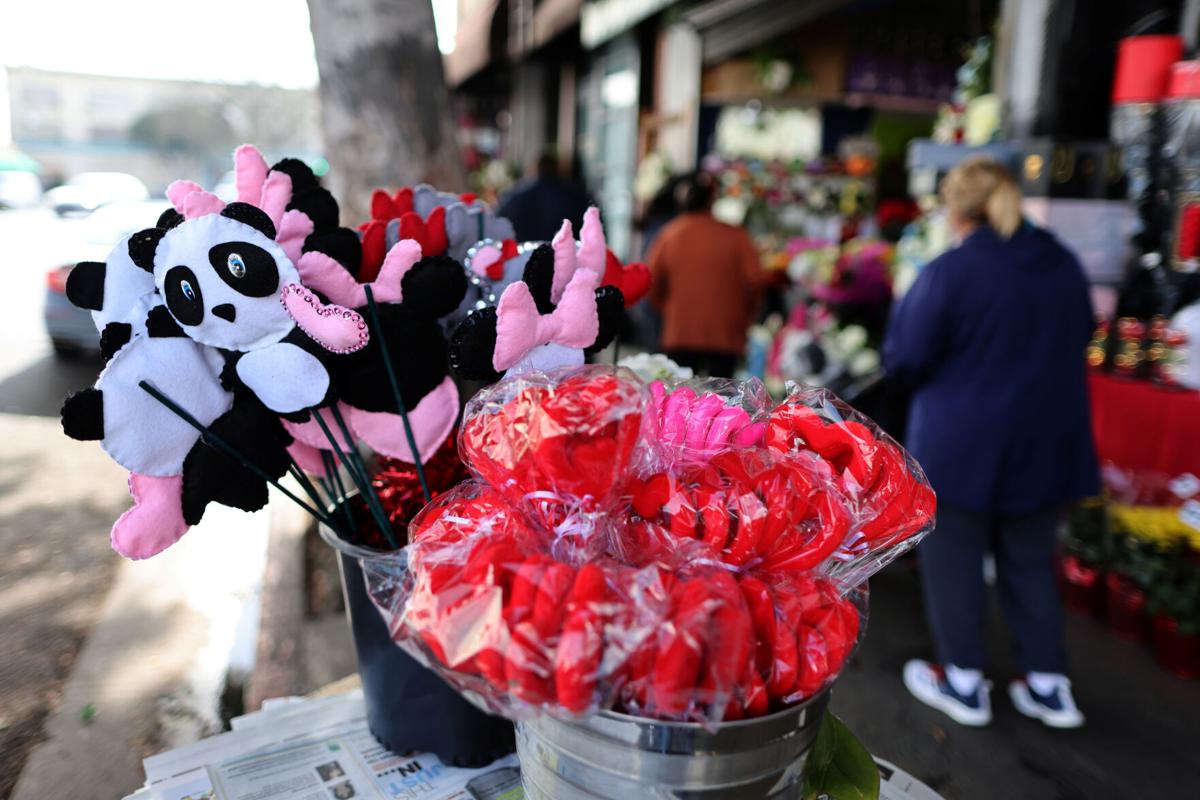 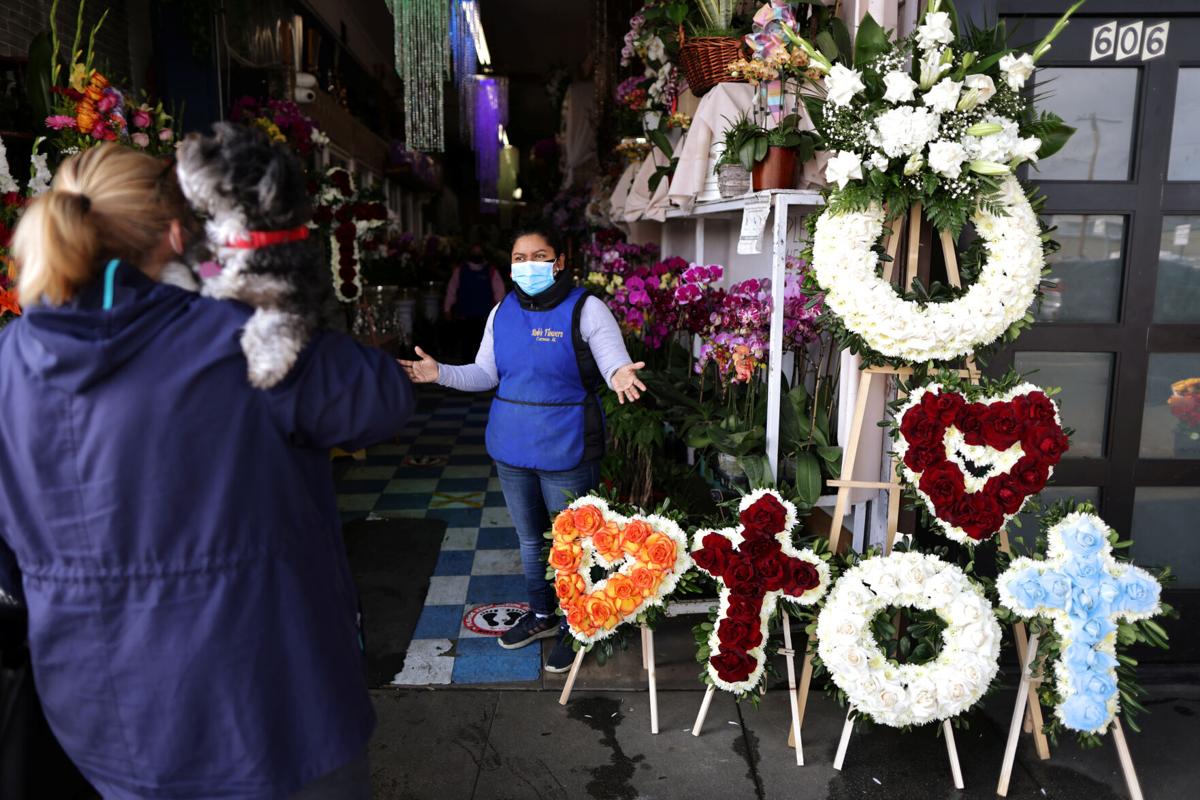 A florist in Los Angeles chats with a customer.

A woman lifts a funeral display into a car in the flower district as the coronavirus disease (COVID-19) outbreak continues, ahead of Valentine's Day in Los Angeles, Calif., last week.

A florist in Los Angeles chats with a customer.

NEW YORK — Deborah De La Flor has been a florist for over 40 years. She’s never experienced a February like this one.

“At a time when someone is sending you an ‘I love you’ card, someone is sending an ‘I loved you’ card,” said De La Flor, who is preparing bouquets and cards for Valentine’s Day — the busiest and most profitable time of year for florists — while making sure other orders are filled for those who have lost loved ones to COVID-19.

Three thousand miles away in Los Angeles, flower seller Fernando Perata has helped over 100 families in the past two months who have lost a family member to the coronavirus. Many of the grieving families were long-time clients.

“One day you see that client, the next day they are gone,” said Perata, 23. He described one mother who for years had been buying flowers for her children. Recently her son and daughter arrived to buy roses for their mother’s funeral.

Perata works in a flower-selling area of Los Angeles bordering Skid Row and the Fashion District, where 3-foot funeral crosses made of roses and white angel wings of roses on easels line the sidewalk next to Valentine’s Day floral teddy bears.

The $35 billion floral industry is perhaps more involved in family joy, grief and milestones than any other. Flower sellers are approaching the Feb. 14 Valentine’s Day with the U.S. COVID-19 death toll near 460,000. In many states, death rates are still at record daily highs.

Mark Chatoff, 56, CEO of the California Flower Mall, one of the country’s largest markets, in downtown Los Angeles, said that when California imposed its first lockdown in March, some florists closed down because weddings, graduations, conventions and other big events disappeared almost overnight. Then came pandemic funerals.

This month, Chatoff said, “it’s both Valentine’s Day and funerals. We’ve been busy because of the funerals. It’s bittersweet. We are busy for the wrong reasons.”

Maria Alvarez, 25, a flower seller in Los Angeles, said her managers at David’s Flowers had been forced to turn away families seeking funeral flowers because of the Valentine’s Day demand.

“It is sad. It is breaking our heart. It’s really hard to tell a family we can’t do flowers for their funeral,” Alvarez said. “We know a lot of them. They send their family member to the hospital, a few days later they have passed away. They tell us their stories. They are broken-hearted.”

Alvarez said it’s also been tough to tell grieving people how much funeral flowers cost. Because of a supply crunch, and huge demand, prices for funeral wreaths have gone from $85 to $120 in just a few weeks.

“A lot of these families, they don’t have work. This is a lot of money for them. We want to help them and give them the original price, but we can’t. Flowers are so expensive right now.”

According to the Society of American Florists, the biggest trade group representing the U.S. floral industry, most flowers sold in the country are imported from Ecuador and Mexico.

The surge in orders in recent months, many of them online, has strained the supply chain. That has led to a lack of space on planes and trucks to deliver enough flowers on time, said Christina Stembel, founder and CEO of Farmgirl Flowers, a national floral e-commerce company.

Ken Freytag, 67, has run a family florist firm in Austin, Texas, for over 40 years. He says he’s generally upbeat, but this month has been tough — not least because his son, daughter and grandchildren have COVID-19.

Freytag and his almost 50 employees proofread each card that is to be sent before printing and attaching it to flower orders.

“A lot of them are sympathy cards,” he said. “I understand what those families are going through. We are an emotion business.”

Costco to raise its minimum wage to $16 an hour

A crash course on wreath making from The Lavender Man

EAST WENATCHEE — In some ways, mining Bitcoin is like drilling for oil.

EAST WENATCHEE — In some ways, mining Bitcoin is like drilling for oil. Read more