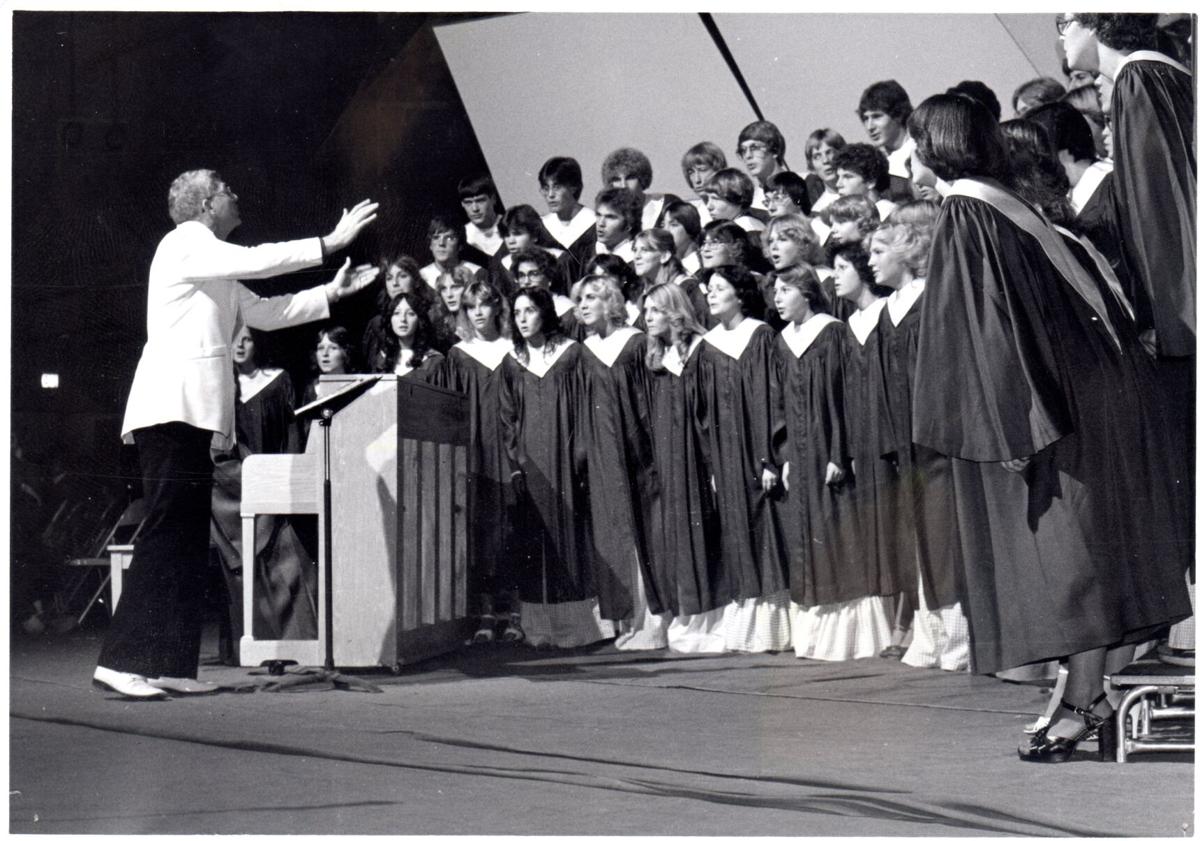 Ed Sand with the Eastmont High School Concert Choir in 1978. 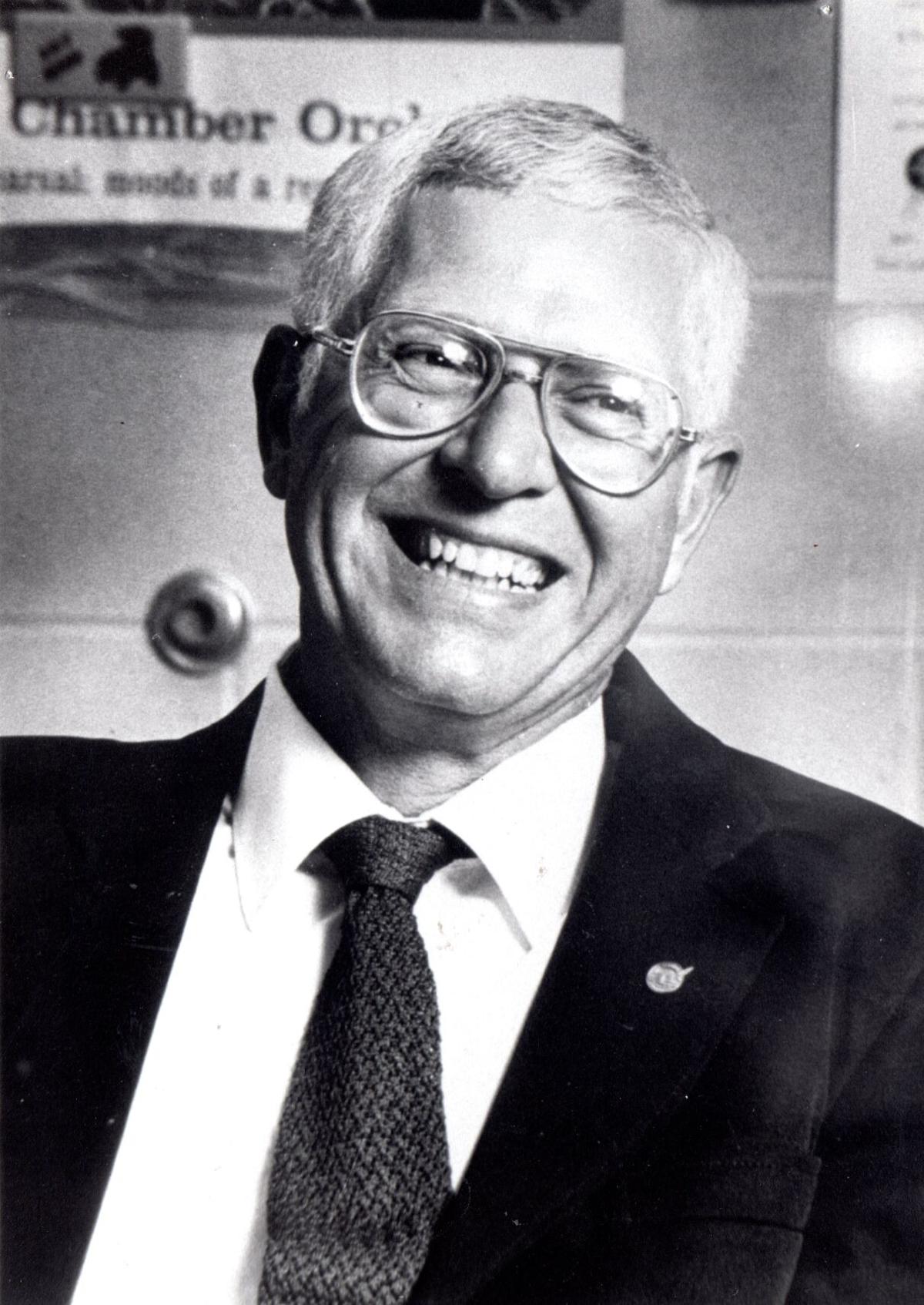 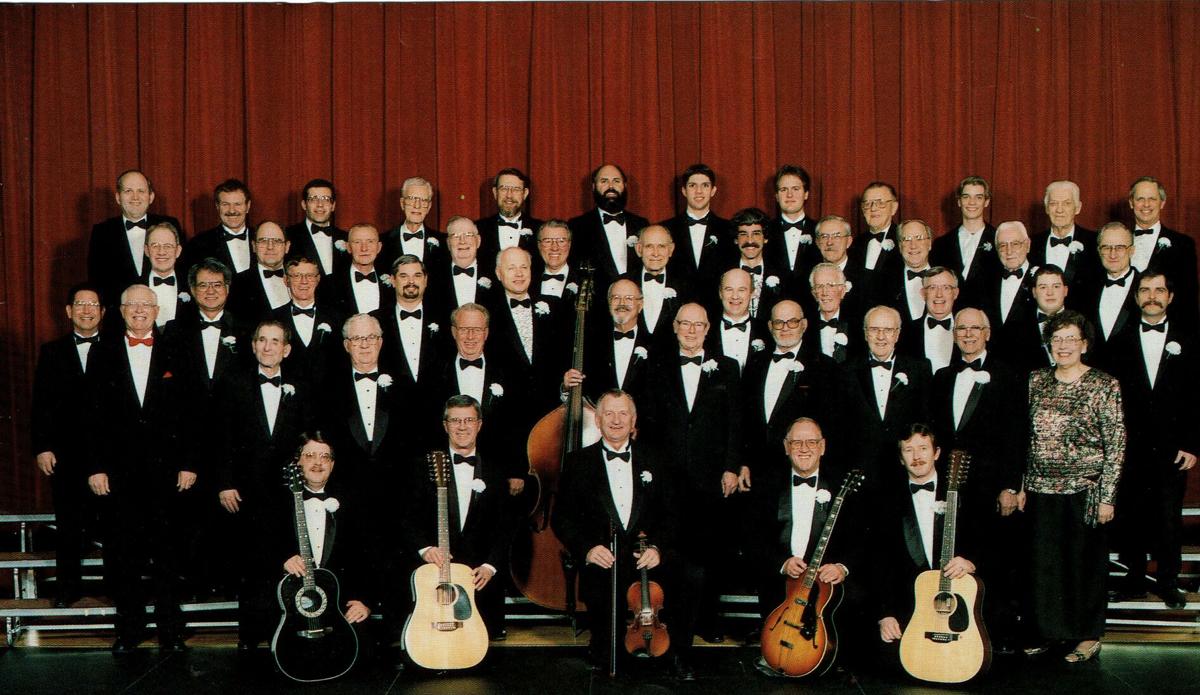 Ed and the 1995 Wenatchee Apollo Club; 55 members celebrated the 85th year of the Club during the May home concert entitled “Themes Like Old Times”; Joy Henderson (on right) was Club’s longtime the piano accompanist. 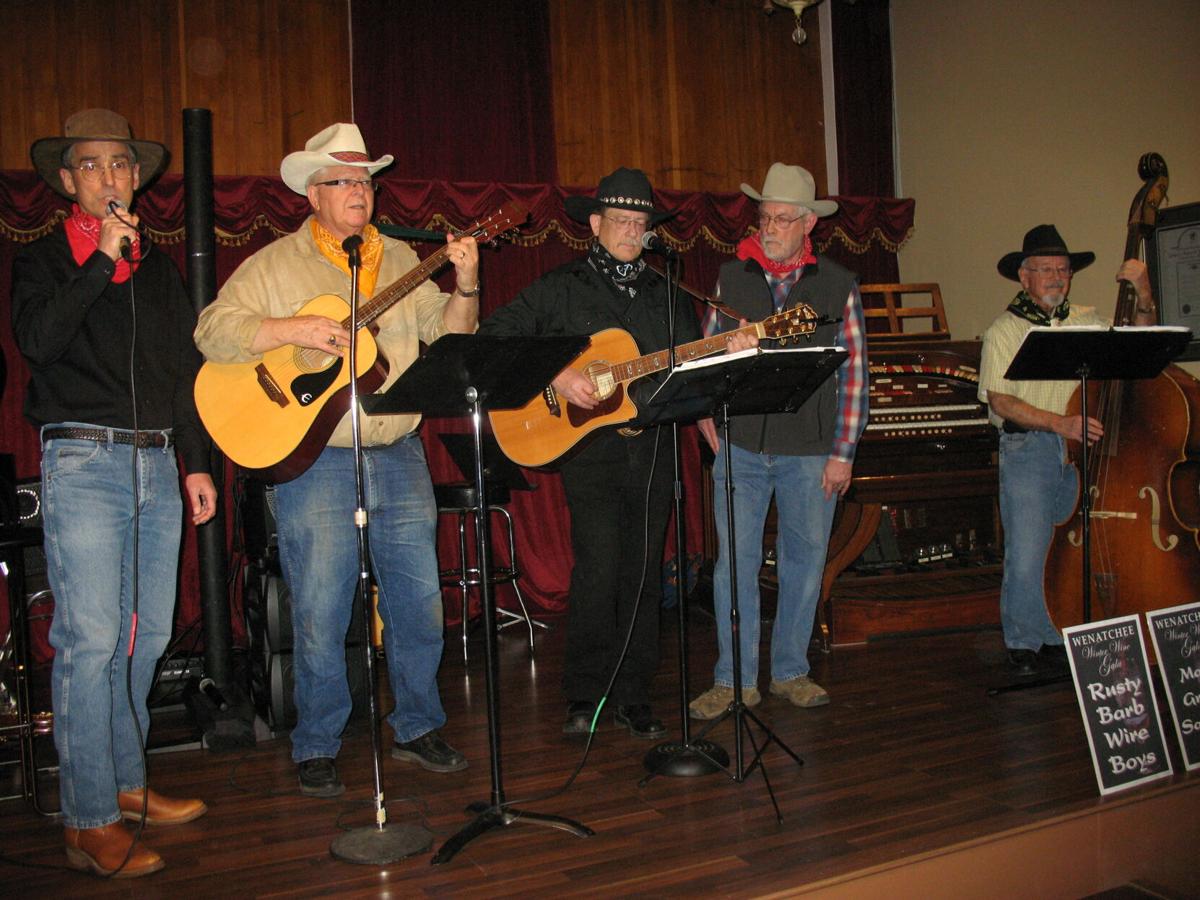 EAST WENATCHEE — Ed Sand was a choral director in the Eastmont School District for 30 years. During that time, his nickname was “Coach,” because he would make the choir come together like a team to make beautiful music.

So it was fitting when a group of his former team members came together with the idea to honor Sand by creating an endowment in his name to benefit the Eastmont choral program. The name of the endowment was fitting too, the Edward J. Sand “Spirit of the Choir” Endowment Fund.

Richard Edwards got to know Sand as the director of the Apollo Club, which Sand directed for more than 40 years. Edwards was a member of the club for 20 years and later the quartet Ed founded called the Rusty Barbed Wire Boys.

The idea of the endowment fund started last year as a conversation last year between some of the original members of the Rusty Barbed Wire Boys: Edwards, Jerry Michael and Bruce Brown.

“We keyed on the idea that a scholarship would be good but an endowment fund to help the choir would be better,” Edwards said. He added: “Then the pandemic hit and everything went out the window.”

The idea sat on the shelf until mid-February this year when he reached out to Tara Abbott, the current Eastmont choral director, about funding a scholarship or fund for the choir.

During that conversation, Abbott rattled out the phrase, spirit of the choir. At that point, Edwards thought, “That was it.”

Ed Sand moved to East Wenatchee in 1957 and spent 30 years as a music educator in the Eastmont School District. After retiring from Eastmont in 1987, he taught music for another 12 years at St. Joseph Catholic School in Wenatchee. During his time as an educator, he was also the director of the Apollo Club men’s chorus for over 40 years.

He was the Eastmont Teacher of the Year and East Wenatchee Citizen of the Year in 1962 and 1963, inducted into the Washington Music Educators Association Hall of Fame at Central Washington University in 2000, and in 2003 received the Wenatchee region’s highest level of recognition for support of the arts, The Stanley Lifetime Achievement Award.

Sand is currently living at Highgate Senior Living facility in Wenatchee. Prior to the pandemic, he was still directing his quartet, The Rusty Barbed Wire Boys. He and his late wife Mary have four children, Brian, Cary, Penny and Mandy.

“That was the neatest idea, to create a Spirit of the Choir Award that goes to the choral program because dad was all about making sure the choir was serving the community,” said Ed Sand’s daughter, Mandy Bush.

“They would sing at rest homes and clubs throughout town, Rotary. They sang at the mall. They sang to bring joy to people. It wasn’t just about the concerts at the high school. It was going to the grade school, going to the middle schools, going to all these places, showing that spirit.”

Abbott said the endowment would really benefit the students in the program and give them more opportunities to go to extracurricular-type extension programs, festivals, competitions, choral exchanges and things like that.

“Things that our normal budget doesn’t cover and to help with that,” Abbott said.” In East Wenatchee, we don’t have a band booster or any kind of music booster. We have ASB to do fundraising, but it’s become really difficult to do any fundraising through ASB. It’s so limited. All the laws and regulations are hard to work through.”

The Edward J. Sand “Spirit of the Choir” Endowment Fund was established at the Community Foundation of North Central Washington with $5,500. Each October, there will be a disbursement of 5% of the funds.

“Now, the push is to advertise the fund and have those people inspired by Ed, and there are a lot of them out there, donate to the fund,” Edwards said.

Edwards said every time the Rusty Barbed Wire Boys play, all proceeds go to fund. Whenever the Apollo Club can perform again, there will be a benefit concert for the fund.

Those seeking to donate can go to bit.ly/2QcQ3Dj