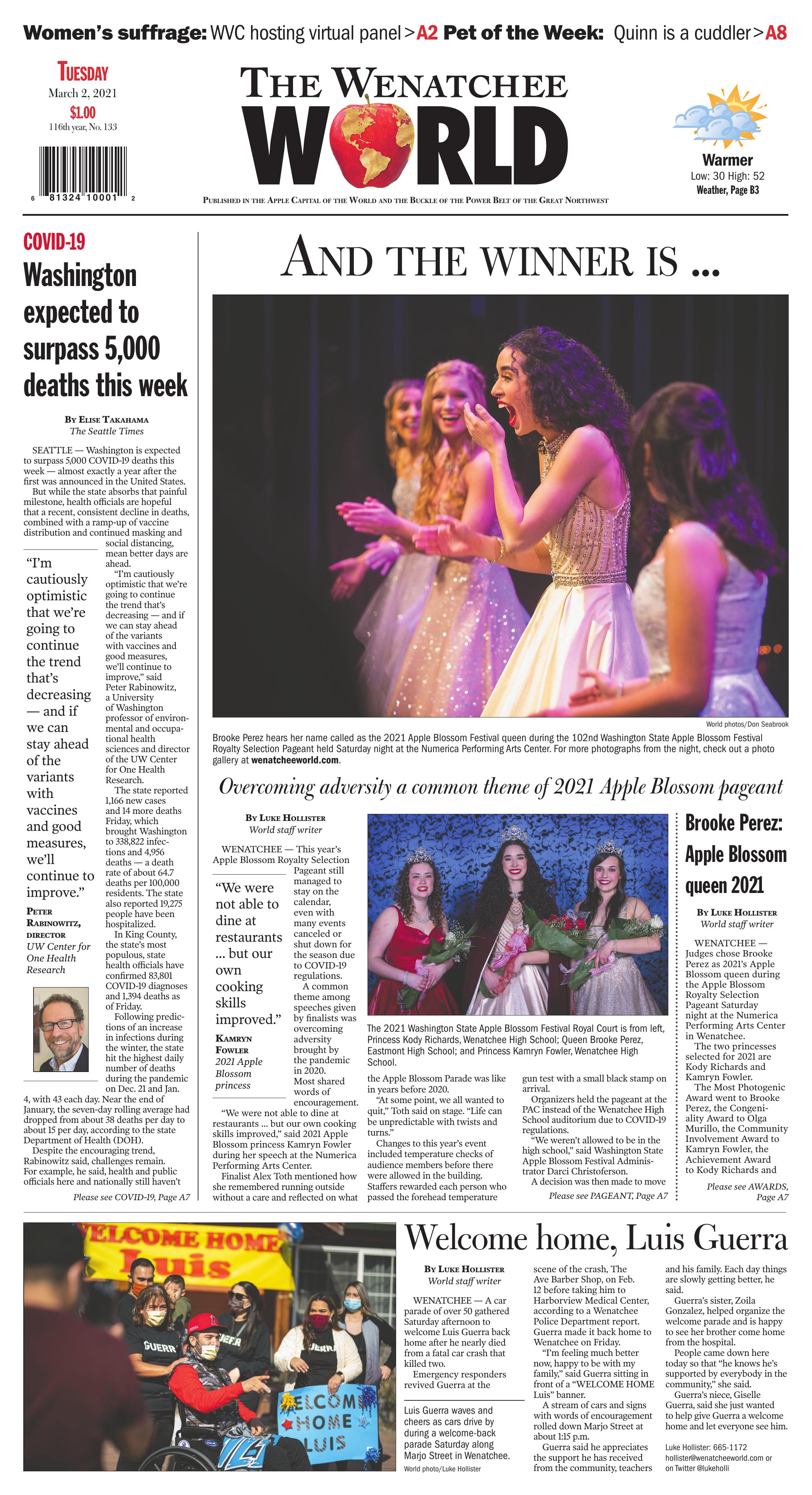 When the curtain goes down, the 2021 Apple Blossom Royal Court hugs and are hugged by the rest of the top 10 candidates at the 102nd Washington State Apple Blossom Festival Royalty Selection Pageant held Saturday at the Numerica Performing Arts Center.

Held at the Performing Arts Center this year, 100 audience members scattered among cardboard cutouts watch a slide show of the top 10 candidates on Saturday.

WENATCHEE — This year’s Apple Blossom Royalty Selection Pageant still managed to stay on the calendar, even with many events canceled or shut down for the season due to COVID-19 regulations.

A common theme among speeches given by finalists was overcoming adversity brought by the pandemic in 2020. Most shared words of encouragement.

“We were not able to dine at restaurants … but our own cooking skills improved,” said 2021 Apple Blossom princess Kamryn Fowler during her speech at the Numerica Performing Arts Center.

Finalist Alex Toth mentioned how she remembered running outside without a care and reflected on what the Apple Blossom Parade was like in years before 2020.

“At some point, we all wanted to quit,” Toth said on stage. “Life can be unpredictable with twists and turns.”

Changes to this year’s event included temperature checks of audience members before there were allowed in the building. Staffers rewarded each person who passed the forehead temperature gun test with a small black stamp on arrival.

Organizers held the pageant at the PAC instead of the Wenatchee High School auditorium due to COVID-19 regulations.

A decision was then made to move the event into the PAC — “it’s very cozy,” she said. Overall, the pageant was not much different this year and kept the same format as before.

Those looking around at the new space would have a hard time missing the hundreds of cardboard cutouts around and above them.

The fan cutout idea came when Washington was still in Phase 1 of Gov. Jay Inslee’s Roadmap to Recovery plan. Christoferson said she at first did not think an audience would be allowed to attend.

There was an extra podium for social distancing, questions for finalists were listed on flowers and everybody had the opportunity to buy a fan cutout, she said.

Over 250 cardboard fan cutouts were in the seats of the PAC Saturday night. Audience members sat socially distanced throughout the PAC’s auditorium.

Olga Murillo, 2021 Congeniality Award winner, applauded the Wenatchee community for finding ways to come together during difficult times this past year.

“When this global pandemic hit, we were asked to live a new way of life, to protect our family, friends and people we do not know,” she said. “From masking up to supporting local businesses … our community continues to persevere.”

SEATTLE — Washington is expected to surpass 5,000 COVID-19 deaths this week — almost exactly a year after the first was announced in the United States.

But while the state absorbs that painful milestone, health officials are hopeful that a recent, consistent decline in deaths, combined with a ramp-up of vaccine distribution and continued masking and social distancing, mean better days are ahead.

“I’m cautiously optimistic that we’re going to continue the trend that’s decreasing — and if we can stay ahead of the variants with vaccines and good measures, we’ll continue to improve,” said Peter Rabinowitz, a University of Washington professor of environmental and occupational health sciences and director of the UW Center for One Health Research.

In King County, the state’s most populous, state health officials have confirmed 83,801 COVID-19 diagnoses and 1,394 deaths as of Friday.

Following predictions of an increase in infections during the winter, the state hit the highest daily number of deaths during the pandemic on Dec. 21 and Jan. 4, with 43 each day. Near the end of January, the seven-day rolling average had dropped from about 38 deaths per day to about 15 per day, according to the state Department of Health (DOH).

Despite the encouraging trend, Rabinowitz said, challenges remain. For example, he said, health and public officials here and nationally still haven’t figured out how to keep the virus from disproportionately infecting certain groups, especially communities of color.

In Washington, confirmed or probable case rates for Native Hawaiian, Pacific Islander and Hispanic/Latino populations are about four times higher than for white and Asian populations, according to a DOH report published this month.

In addition, the death rates from COVID-19 among Native Hawaiian and Pacific Islander communities are nearly six times higher than for the white population, the DOH report said.

And even though vaccination efforts have slowed infection, hospitalization and death rates, recent state data shows shots have so far gone disproportionately to white Washington residents.

A DOH spokesperson told The Seattle Times this month officials are still analyzing the race data, and haven’t come to any conclusions about inequities.

People 80 and older have accounted for about half of the state’s virus deaths. The next most impacted age group includes those ages 60 and 79 years old, who represent about 40% of deaths, followed by those in their 40s and 50s, who make up about 9% of deaths.

The first coronavirus death in Washington — and the U.S. — was announced Feb. 29, 2020. The King County man was in his 50s and had an underlying health condition. He was a patient at EvergreenHealth hospital in Kirkland.

The same day, two more cases were identified at Life Care Center of Kirkland, prompting Gov. Jay Inslee to declare a state of emergency. The next day, March 1, officials confirmed a second virus death — a patient in his 70s at EvergreenHealth — and two additional cases, bringing the total number of cases in King County to six.

The death toll grew to 294 by the end of March, marking the first wave of the pandemic last spring. By the end of April, 840 people were dead. Within another month, 1,000.

The initial spring surge was much more driven by outbreaks in long-term care facilities, but as the pandemic has progressed, the state watched demographics shift, said Katie Hutchinson, a health statistics manager for DOH. The most recent surge in cases, for example, was driven by younger people, she said.

The state surpassed 2,000 deaths by mid-September. And a few weeks after the new year began, we exceeded 4,000.

”People were getting tired of social distancing measures,” Rabinowitz said. “A couple holidays in a row had an effect. And respiratory illnesses are almost always worse in the winter.”

Since then, the daily count has been steadily decreasing, averaging about 15 per day, according to the state.

Washington, a state of 7.6 million residents, has reported fewer deaths than the majority of the country, with 29 states confirming more deaths, according to data from Johns Hopkins University. California, the state that’s recorded the most virus-related deaths, last week hit 50,000 deaths, and New York and Texas have both reported more than 40,000.

Meanwhile, the death count in states with population sizes similar to Washington spans a fairly wide range. Arizona has reported roughly 15,000 deaths, while Virginia has counted about 8,000.

But while things seem to be looking up, with greater vaccine distribution and slowing infection rates, health officials are concerned about the new virus variants that have popped up in the U.S. and what they mean for our state.

The University of Washington’s Institute for Health Metrics and Evaluation (IHME) recently predicted that, in a worst-case scenario, the country — which this month saw deaths reach 500,000 — could see up to 654,000 deaths by the beginning of May and a resurgence of the virus in some states by the spring, rather than a continued decline.

“What we’re seeing is sobering, and will require us to continue taking this pandemic very seriously,” IHME director Christopher Murray said in a January statement. “Getting vaccines out quickly is essential, and masks are still one of the best tools we have to keep transmission low and avoid the worst possible outcome. People will need to continue taking precautions even once they are vaccinated, because of the potential for more contagious variants to spread.”

Still, health experts said there are positive take-aways from the past year of living through a pandemic.

”We’ve learned so much from COVID,” Rabinowitz said. “We’ve learned how to use disease models like we’ve never used before to help predict what’s going on, we’ve created a vaccine faster than we’ve ever created one before, we know what the general public is capable of doing in an emergency. ... And we can’t forget these lessons.”

”When you look at the pattern of cases versus deaths versus hospitalizations, we saw an enormous number of deaths last spring,” she said. “And a lot of that was because the virus got into a community of very vulnerable individuals and we didn’t know how to treat it. And we’re now a year later and the mortality rate is going down because we’ve learned a lot.”

Grant added that while we could be nearing the end of the pandemic, we still need to continue to mask up, distance ourselves from others and remain vigilant.

”There’s a lot of reason for optimism right now,” she said. “We’re not there yet though. ... We need to stay the course for a bit longer.”

Luis Guerra waves and cheers as cars drive by during a welcome-back parade Saturday along Marjo Street in Wenatchee.

Friends, family, teachers and Wenatchee community members drove by Luis Guerra as a part of a welcome back parade Saturday along Marjo Street in Wenatchee.

WENATCHEE — A car parade of over 50 gathered Saturday afternoon to welcome Luis Guerra back home after he nearly died from a fatal car crash that killed two.

Emergency responders revived Guerra at the scene of the crash, The Ave Barber Shop, on Feb. 12 before taking him to Harborview Medical Center, according to a Wenatchee Police Department report. Guerra made it back home to Wenatchee on Friday.

“I’m feeling much better now, happy to be with my family,” said Guerra sitting in front of a “WELCOME HOME Luis” banner. 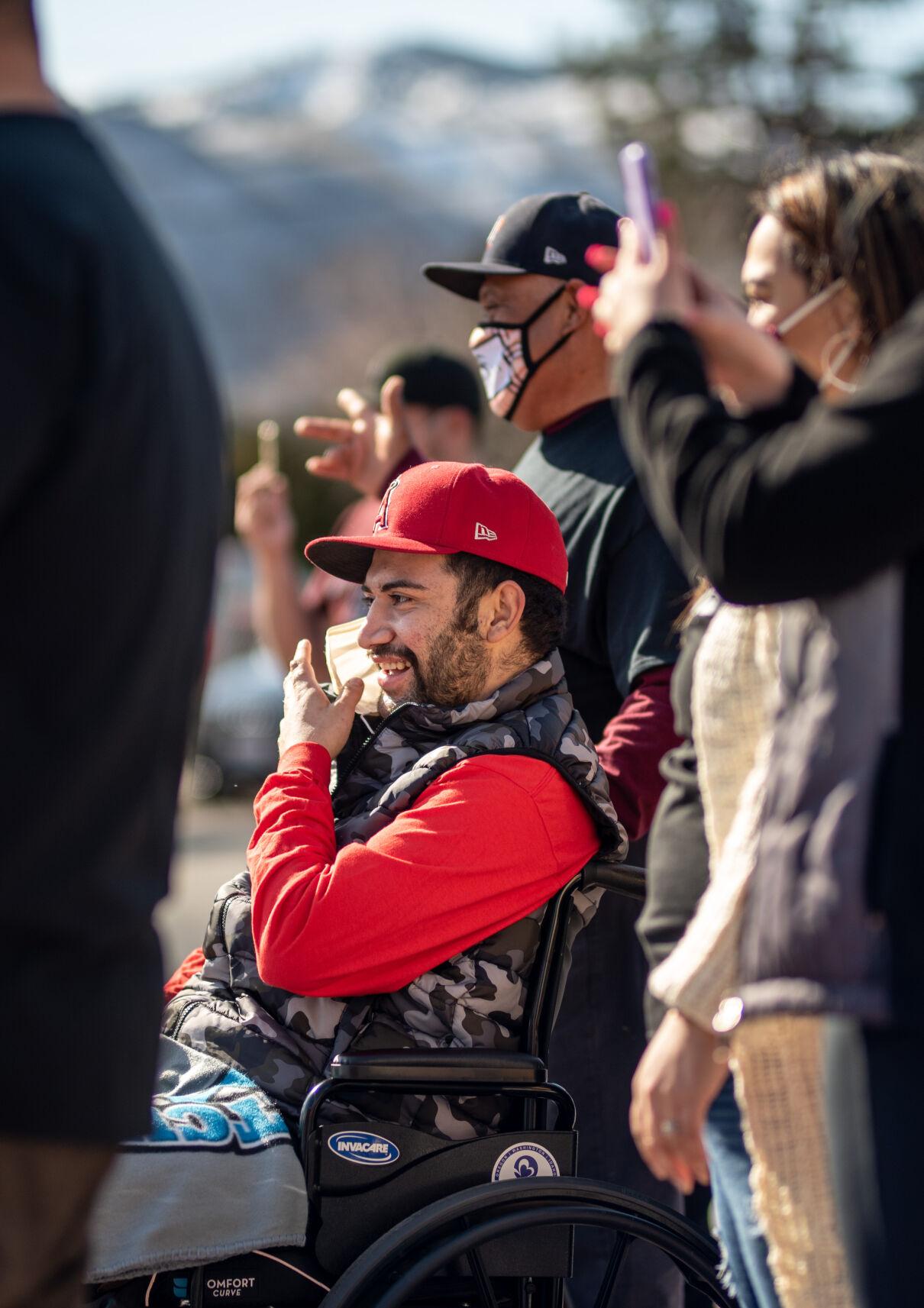 Luis Guerra with his friends and family during a welcome back parade Saturday along Marjo Street in Wenatchee.

A stream of cars and signs with words of encouragement rolled down Marjo Street at about 1:15 p.m.

Guerra said he appreciates the support he has received from the community, teachers and his family. Each day things are slowly getting better, he said.

Guerra’s sister, Zoila Gonzalez, helped organize the welcome parade and is happy to see her brother come home from the hospital.

People came down here today so that “he knows he’s supported by everybody in the community,” she said.

Guerra’s niece, Giselle Guerra, said she just wanted to help give Guerra a welcome home and let everyone see him.

The two princesses selected for 2021 are Kody Richards and Kamryn Fowler.

WENATCHEE — This year’s Apple Blossom Royalty Selection Pageant still managed to stay on the calendar, even with many events canceled or shut down for the season due to COVID-19 regulations.

The Most Photogenic Award went to Brooke Perez, the Congeniality Award to Olga Murillo, the Community Involvement Award to Kamryn Fowler, the Achievement Award to Kody Richards and the Most Original Speech Award to Sophia Hernandez.

Judges selected 10 finalists on Jan. 27. The group then spent four weeks at coaching and rehearsal sessions preparing for pageant night. Parts of the training included speech tips and walking lessons.

Due to space capacity regulations, only families of finalists, outgoing Apple Blossom royalty as well as some supporters attended the event.