WASHINGTON, D.C. — Joe Biden expanded his narrow leads over President Donald Trump in the battleground states of Pennsylvania and Georgia even as Republicans sought to raise $60 million to fund lawsuits challenging the results.

Trump remained defiant, vowing to press unfounded claims of fraud as a weary, anxious nation waited for clarity in an election that only intensified the country’s deep polarization.

On the fourth day of vote counting, former Vice President Biden had a 253 to 214 lead in the state-by-state Electoral College vote that determines the winner, according to Edison Research.

Securing Pennsylvania’s 20 electoral votes would put Biden over the 270 he needs to win the presidency after a political career stretching back nearly five decades.

Biden would also win if he prevails in two of the three other key states where he was narrowly ahead on Friday: Georgia, Arizona and Nevada. Like Pennsylvania, all three were still processing ballots on Friday.

Nationwide, Biden led Trump by 4.1 million votes out of a record 147 million cast.

However, his lead was much smaller in those four contested states: just 84,670 votes out of more than 16 million cast. In Georgia, he led by a mere 3,974 votes.

As Biden’s lead grew in Pennsylvania, hundreds of Democrats gathered outside Philadelphia’s downtown vote-counting site, wearing yellow shirts reading “Count Every Vote.” In Detroit, a crowd of Trump supporters, some armed, protested outside a counting location, waving flags and chanting, “Fight!” Under the banner of “Stop the Steal,” Trump supporters planned 62 separate rallies for Friday and Saturday.

Trump showed no sign he was ready to concede, as his campaign pursued a series of lawsuits that legal experts said were unlikely to alter the election outcome.

“Joe Biden should not wrongfully claim the office of the President. I could make that claim also. Legal proceedings are just now beginning!” he wrote on Twitter.

Trump earlier leveled an extraordinary attack on the democratic process, appearing at the White House on Thursday evening to falsely claim the election was being “stolen” from him. Election officials across the nation have said they are unaware of any significant irregularities.

Some of Trump’s fellow Republicans in Congress said he should tone down his rhetoric.

The Republican National Committee is looking to collect at least $60 million from donors to fund Trump’s legal challenges, two sources familiar with the matter said.

In both Pennsylvania and Georgia, Biden overtook Trump as officials processed thousands of mail-in ballots that were cast in urban Democratic strongholds including Philadelphia and Atlanta.

The number of Americans voting early and by mail this year surged due to the coronavirus as people tried to avoid large groups of voters on Election Day. The methodical counting process has left Americans waiting longer than they have since the 2000 election to learn the winner of a presidential contest.

A sense of grim resignation settled in at the White House on Friday, where the president was monitoring TV and talking to advisers on the phone. One adviser said it was clear the race was tilting against Trump, but that Trump was not ready to admit defeat.

The campaign’s general counsel, Matt Morgan, asserted in a statement on Friday that the elections in Georgia, Nevada and Pennsylvania all suffered from improprieties and that Trump would eventually prevail in Arizona.

He also said the campaign expected to pursue a recount in Georgia, as it has said it will do in Wisconsin, where Biden won by more than 20,000 votes. A margin that wide has never been overturned by a recount, according to Edison Research.

Georgia officials said on Friday they expect a recount, which can be requested by a candidate if the final margin is less than 0.5%, as it currently is. Biden led by 0.1% as of Friday evening.

In response to the idea that Trump might not concede, Biden spokesman Andrew Bates said in a statement on Friday, “The United States government is perfectly capable of escorting trespassers out of the White House.”

The messy aftermath capped a vitriolic campaign that underscored the country’s enduring racial, economic and cultural divides, amid a pandemic that has killed more than 235,000 Americans.

If he wins Biden might face a difficult task governing in a divided Washington.

Republicans could keep control of the U.S. Senate, which would enable them to block much of his agenda, including expanding healthcare and fighting climate change.

Vote totals early Friday evening showed Biden with a lead of 19,584 votes in Pennsylvania, with 96% of the vote tallied. In Georgia, he was 3,974 votes ahead with 99% of the vote in.

Pennsylvania, one of three traditionally Democratic states that handed Trump his 2016 victory, had long been seen as crucial to the 2020 race, and both candidates lavished enormous sums of money and time on the “Rust Belt” state.

While many rural areas in Pennsylvania remain in favor of Trump, Democrats are strong in big cities such as Pittsburgh and Philadelphia.

States have historically taken time after Election Day to tally all votes, although in most presidential elections the gap between candidates is big enough that television networks project the winner and the losing candidate concedes before counting formally ends.

A three-story townhouse under construction is the backdrop for neighbors' outdoor activities. Vicki Winn, center, talks to Shelly Kelly, who lives in the house at right, behind Winn's house in late October. Winn's granddaughter, Sam Brown, 8, watches the conversation.

WENATCHEE — Landlocked by the foothills to the west and the Columbia River to the east, the city of Wenatchee has an acute need for infill housing.

“It’s going to be critical over the next 10, 15, 20 years,” says Planning Manager Stephen Neuenschwander.

Developing empty parcels or adding onto existing properties is an important part of any city’s growth and it’s picking up steam in Wenatchee — especially with smaller housing types like townhouses or duplexes.

Working with developers and community groups, the city in 2019 implemented housing code to allow more diversity in new housing developments. It’s now easier for developers to build everything from smaller townhouses to courtyard-style units, Neuenschwander said.

“That kind of paved the way for some of these smaller infill projects like cottages and townhomes,” he said. “It’s hard to tell what would have happened in 2020 with COVID having an effect on permitting, but hopefully we’ll continue to see more projects like these.”

Among the other changes to the code was a decrease in the number of parking stalls required for some developments, which builders have previously identified as an impediment. Changes to some easement standards were also made to allow access to unusually shaped property parcels, Neuenschwander said. 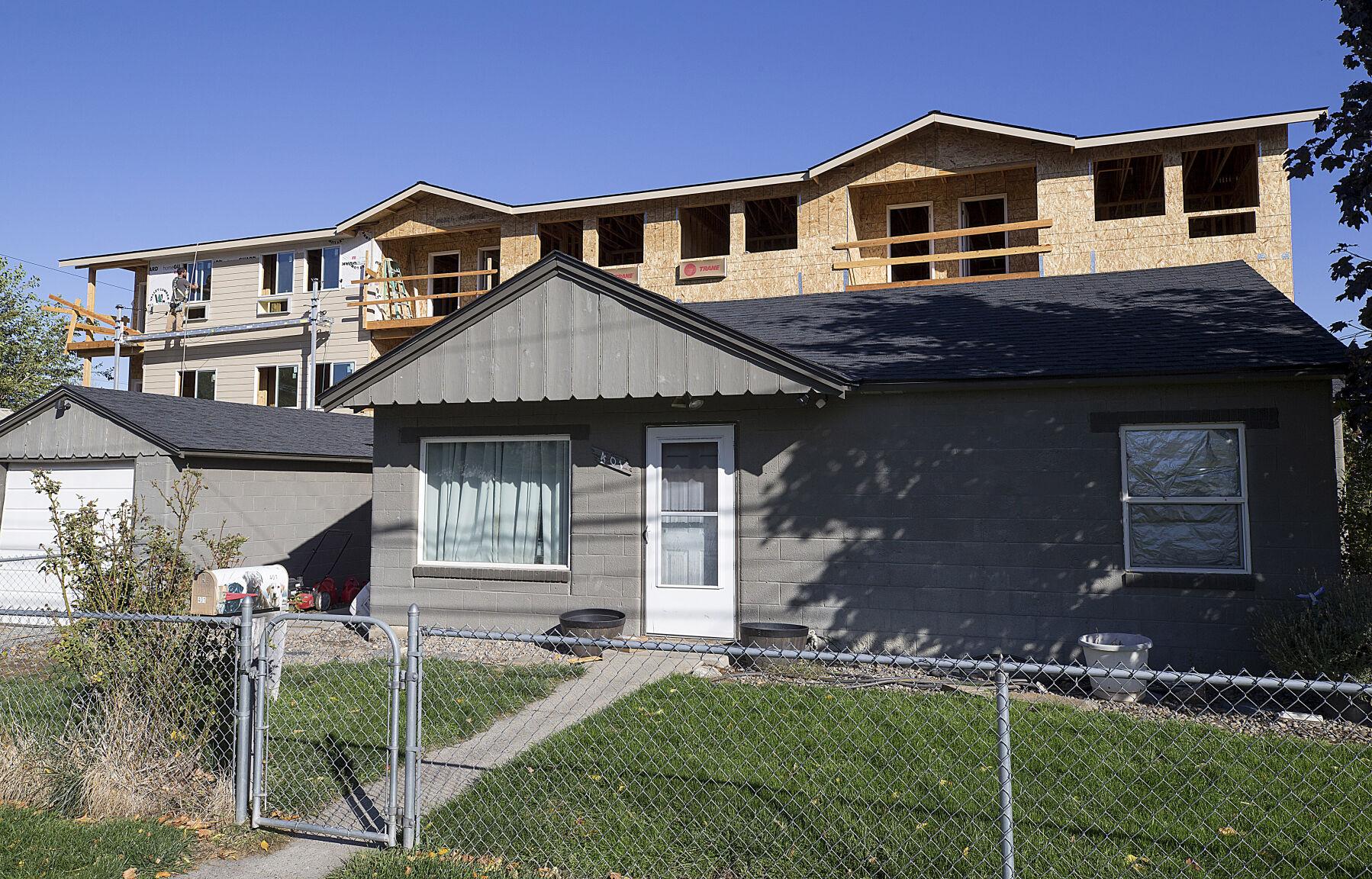 A five-unit townhouse building is going up near the backyards of houses on Sunset Avenue in Wenatchee.

Local builders have responded to the changes, most recently with an uptick in the number of single accessory dwelling permits issued. They allow the construction of secondary residences that are often built next to or behind a single-family home. Home owners will commonly rent out the secondary residence, or provide it to a friend or family member.

The city’s planning department is now meeting with another homeowner interested in building a pair of cottages in their backyard, Neuenschwander said.

He also serves on the Housing Solutions Group for Our Valley Our Future, which has pointed to the need for both infill housing and diverse housing types for years. Its 2018 housing solutions report “Where Will We Live” identified both as priorities in the near future.

But even through the housing code revision process, the city has tried to maintain a balance of development priorities with quality of life for residents, Neuenschwander said.

“In general, it was just a wide variety of changes. Open spaces requirements for each of these homes was one,” he said. “As we’re increasing density opportunities and infill opportunities, one of the main components that our consultants shared with us, and that the planning commission and council agreed with, is that each of these units have open space.” 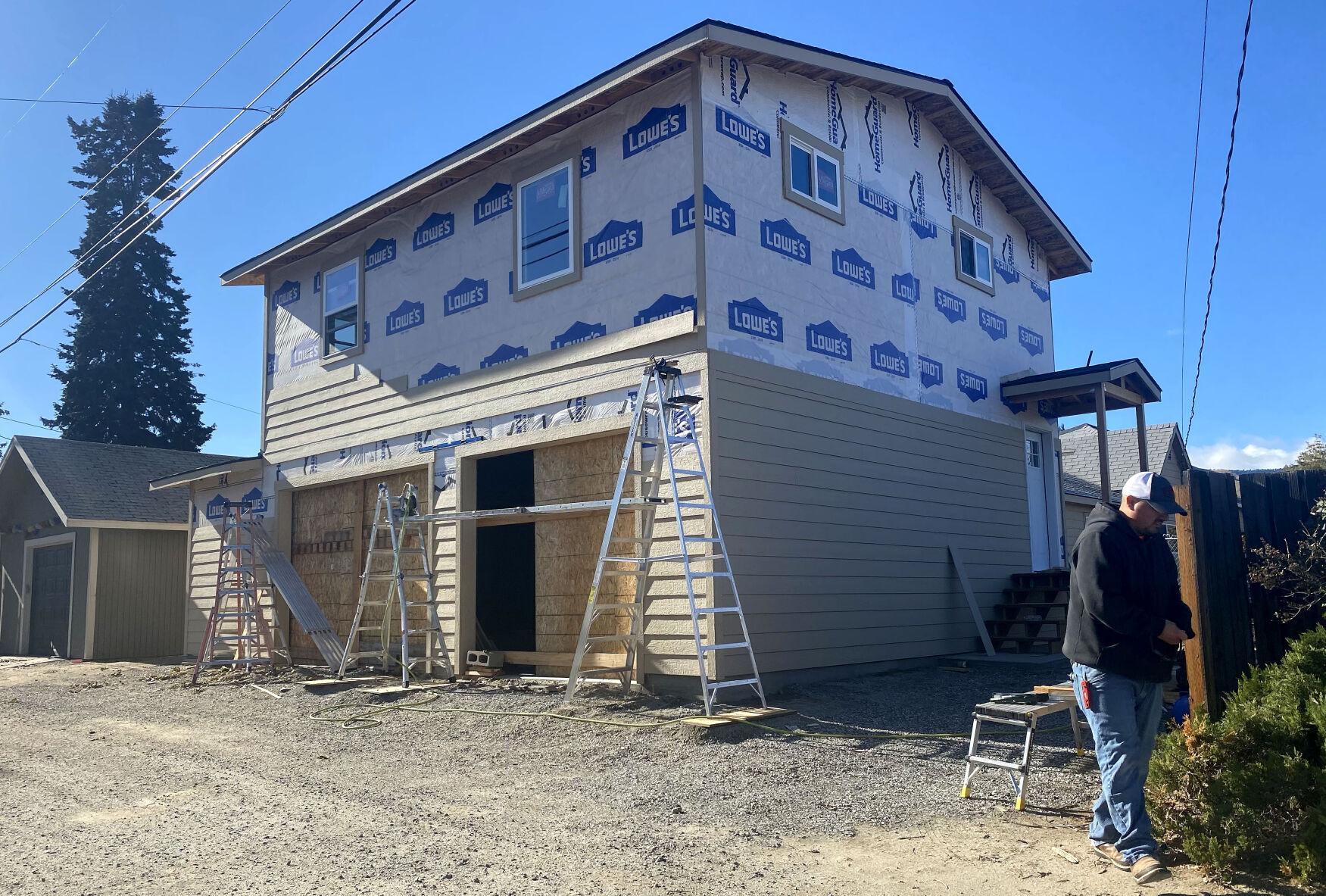 Alberto Mejio is building a garage with an upstairs apartment behind his house on North Franklin Avenue in Wenatchee. He plans to rent out the apartment.

Surprise for some, financial security for others

WENATCHEE — As some infill projects have taken shape, they’ve been met with surprise from neighbors.

One five-unit townhouse development under construction near the intersection of Fifth and North Miller streets is being built just a few feet behind neighboring houses.

Dick Winn, who’s lived in one of those homes on Sunset Avenue for 39 years, said his surprise at the new two-story backdrop is turning to acceptance.

“It’s just like anything else, it’s something we look at every day but once it’s there for a while you just don’t pay attention to it anymore,” he said.

It's one of two separate five-unit townhome projects underway off Fifth Street in the city.

For homeowners like Alberto Mejio, adding a single accessory dwelling unit will be a source of financial security for his family.

Mejio is building a new garage with a one-bedroom upstairs apartment behind his home on North Franklin Avenue. He plans to continue to live in the main home with his girlfriend, Melissa, and rent out the apartment to help cover their mortgage.

“The rental prices now are pretty crazy, so we’ll be paying 90% of our mortgage with whatever we get out of here,” he said. “It’ll be nice because we’ll have the extra money to do whatever.”

The apartment will be 728 square feet with its own parking, private access, and washer and dryer set, he said.

The family bought the property in 2015 and have seen its value increase with the rest of Wenatchee’s housing market, Mejio said. They plan to stay for at least a couple more years, then they’ll likely rent out the main house too.

“We were debating ... to maybe sell or build something but with prices being so crazy we decided to set this up, that way in the future we can maybe keep them as rentals and use that income for the new mortgage,” he said.

Mejio works in construction, and recently graduated from Central Washington University with a construction management degree, so he’s been able to do most of the work on the apartment himself.

That’s helped keep costs down and make it a worthwhile investment, he said. But the construction industry — which was dealt a hand of uncertainty with the pandemic — will also factor into the family’s future plans for the property.

“I work in construction too so if that slows down, my work slows down,” he said. “If it maintains a decent rate, we’ll probably flip it and move on to the next.” 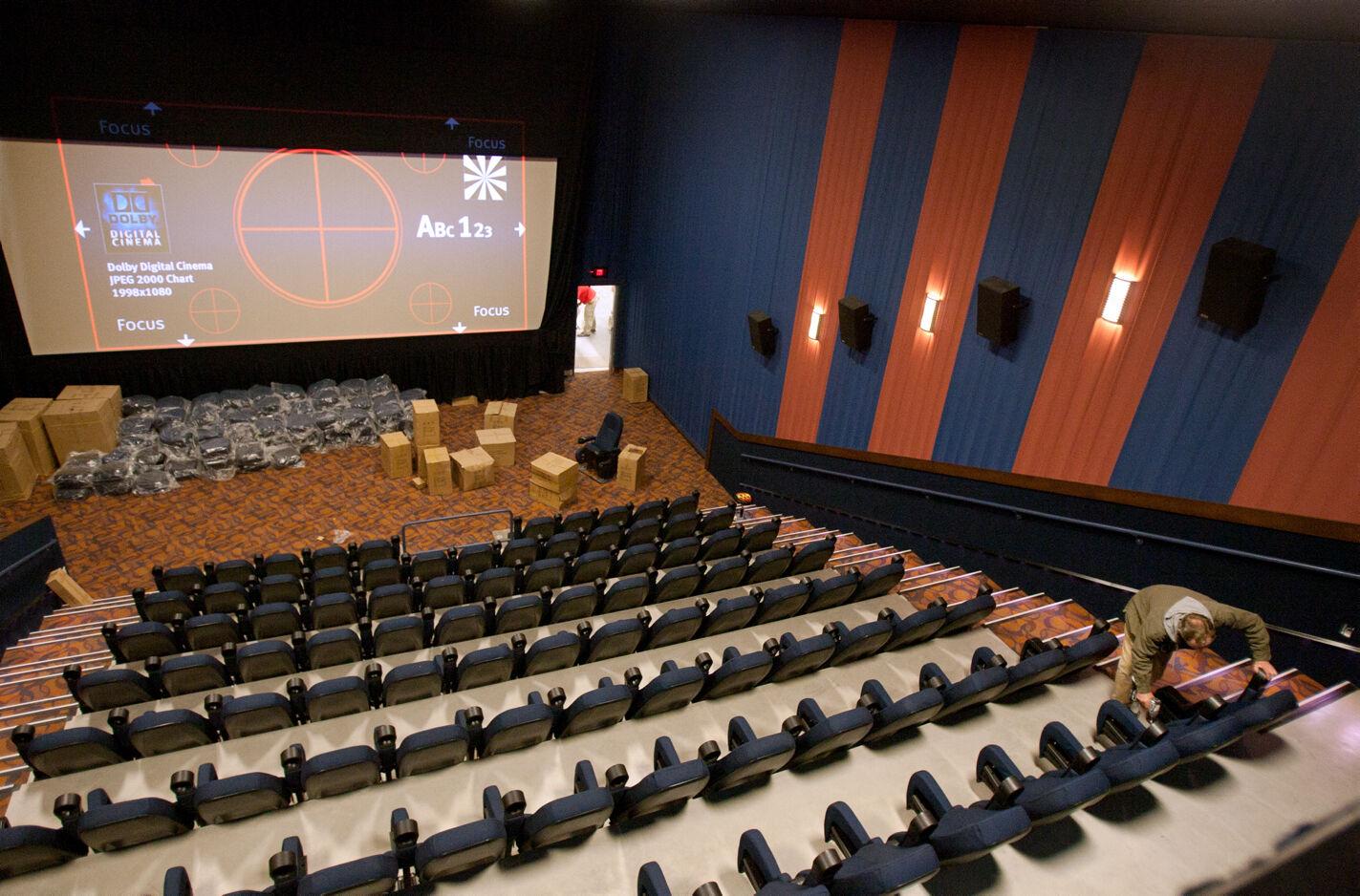 05/13/2011 World photo/Don Seabrook Jeff Sheppard, from Mississippi, screws chairs into place in one of 14 theater rooms at the new Gateway Cinemas building in Wenatchee last Friday while a projector runs through a test showing in the background. 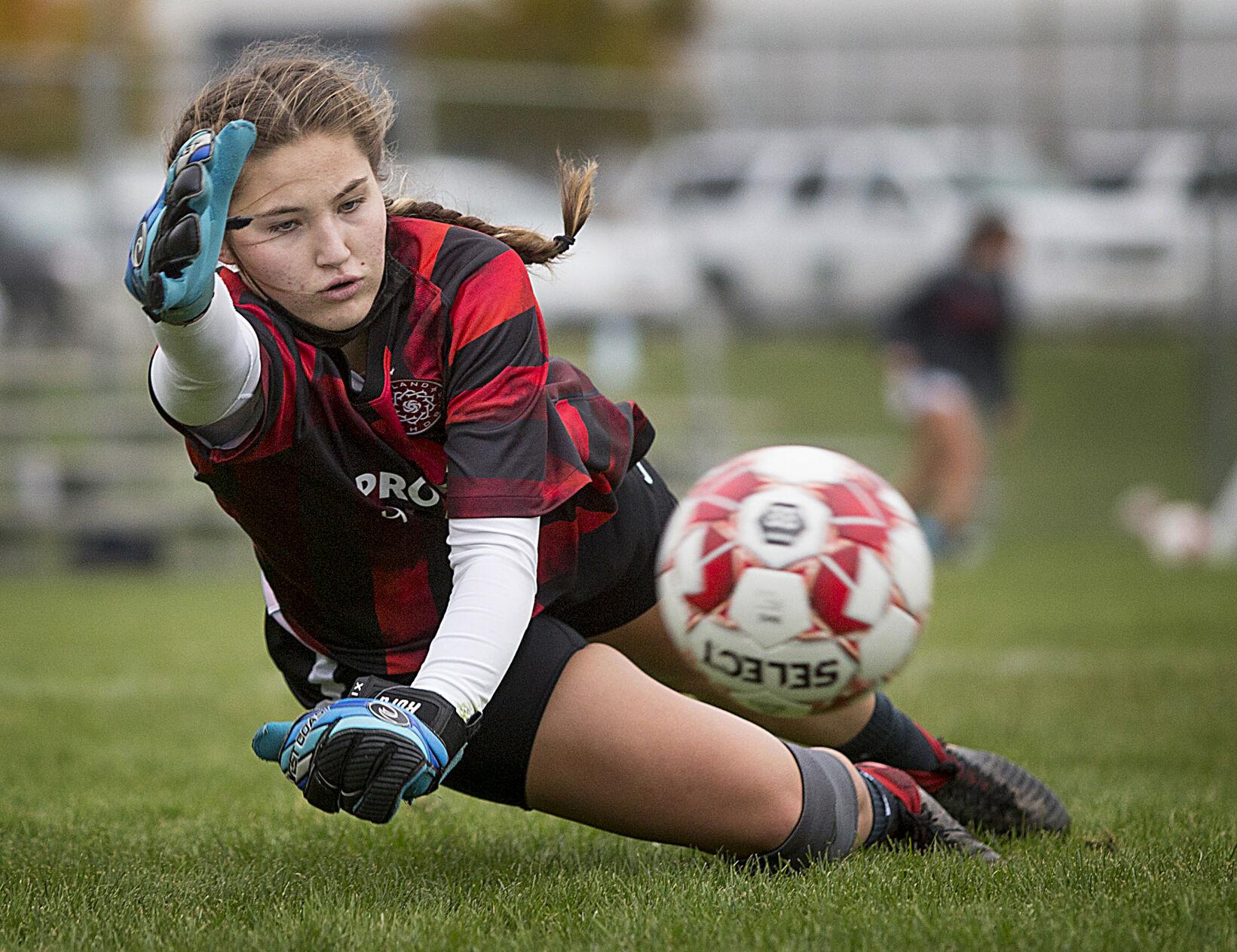 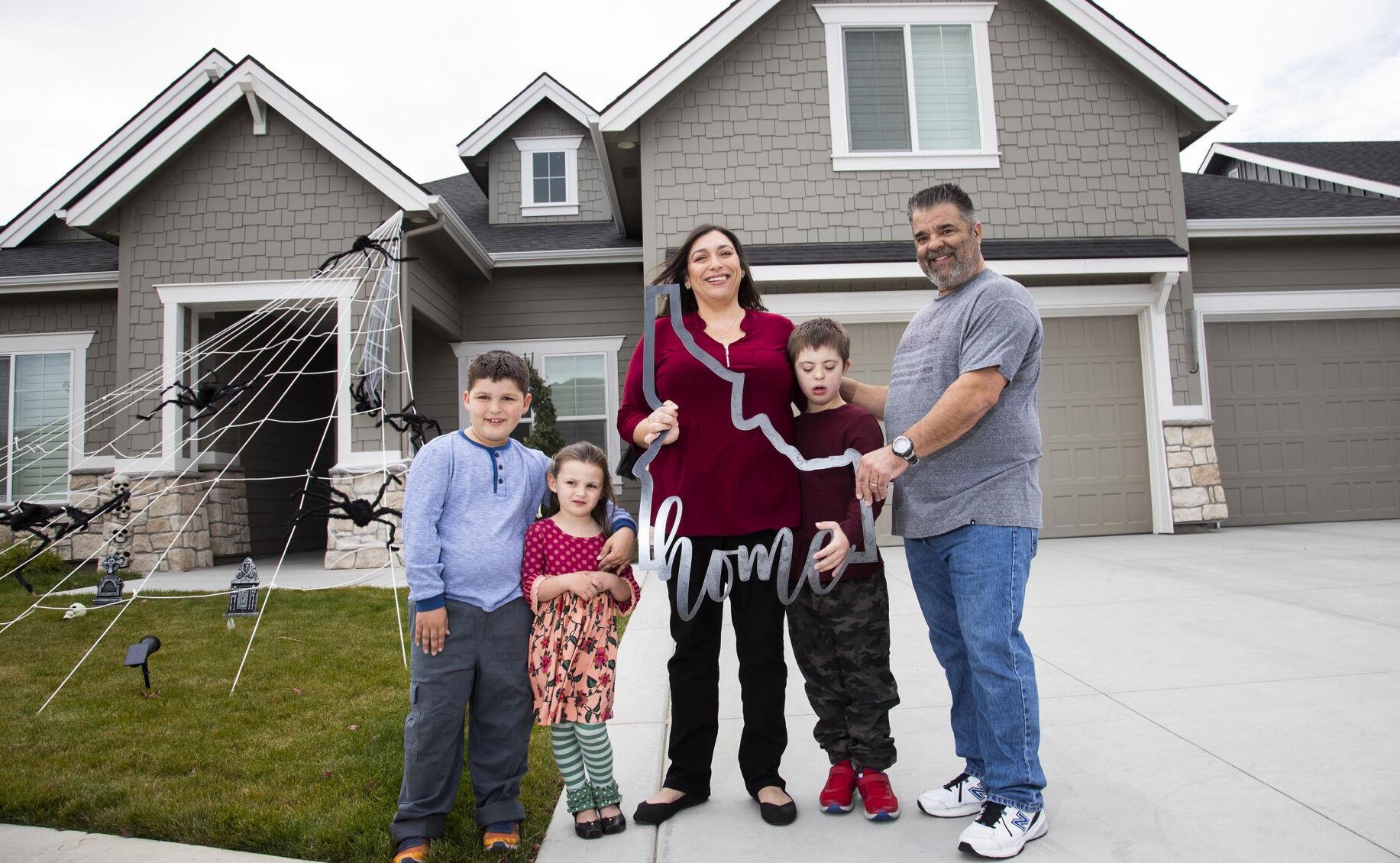 Cori Sarno Villacres, with husband Tony Villacres and children Joey, 11 (center), Zac, 8, and Amelia, 4, gather in front of their new home in Meridian, Idaho, in late October. Cori said they didn't feel comfortable or safe in California — even feeling bullied for their political preferences. They left their life in Sacramento last April to start anew in Idaho. 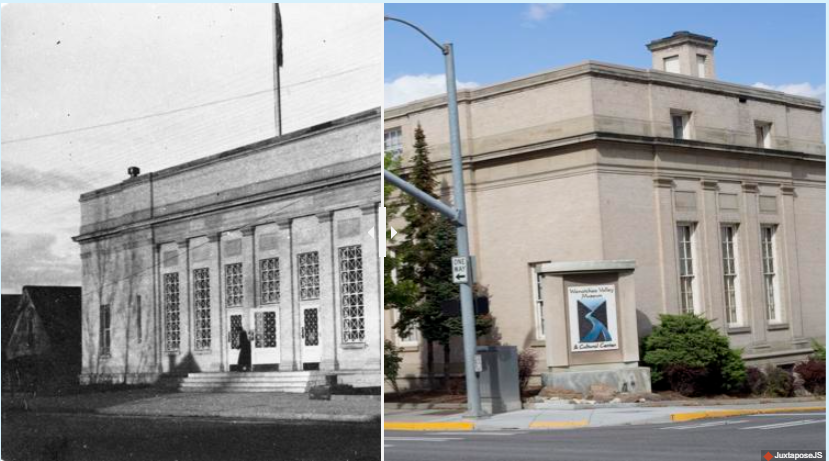