Roger Baird, Peshastin, listens in his truck as Michael Avery with the Washington State National Guard explains the COVID-19 vaccine he is going to receive Tuesday at the Town Toyota Center mass-vaccination site.

Less than 24 hours later they received the COVID-19 vaccine. “I think we just got lucky,” Norm Goode said Friday.

But the state’s recent eligibility expansion and a still-limited supply of vaccine have left thousands of other North Central Washington residents unable to schedule an appointment or sitting on a waiting list. A vaccination system for thousands being built on the fly and rapidly changing information about registration have added to confusion.

Their next opportunity will come at 12 p.m. Sunday, when up to 3,900 Town Toyota Center appointments for next week will be posted on the state Department of Health’s registration website.

“We get a limited number of doses allocated to Washington state by the federal government, so we’re just really encouraging folks to still be patient as we wait on more doses,” he said. “But there’s certainly more folks interested in getting the vaccine than we have doses for still.”

The site opened Tuesday, just eight days after it was announced, and has been able to steadily increase its daily appointment total since — 110 people were vaccinated Tuesday, around 400 Wednesday and Thursday and just over 600 Friday.

Registration for the site opened Monday and appointments filled up quickly. A waiting list grew to more than 3,000 names, Portner said.

Thursday evening officials determined that they had the resources to open up around 200 extra appointment times for Friday. They emailed some of those people on the waiting list, including Karen and Norm Goode, and all 200 were taken within 90 minutes.

Everyone on the waitlist who hasn’t gotten an appointment will need to reregister when new appointments are released Sunday, Chelan-Douglas Health District Public Information Officer Jennifer Bushong said Wednesday.

The demand for information and appointments this week also hit Confluence Health, which is also vaccinating eligible residents. It received around 16,000 calls over the week, 2,000 of which were routed to its vaccine hotline, spokesman Andrew Canning said Friday.

Faced with similar vaccine supply limitations, the organization opened up 1,100 appointments at 7 a.m. Monday and they were all booked by 1 p.m. It plans to open up its schedule for new appointments Monday.

As statewide health officials work to roll out the infrastructure to support a historic inoculation campaign, registration websites and phone numbers have sometimes changed, adding to confusion.

More than 200 people have contacted The Wenatchee World this week with questions about the process.

“We can’t get a vaccine. We are 1b ready, but no vaccines for the elderly,” one Leavenworth reader wrote, referencing the state’s Phase 1B eligibility phase. “Can we get priority before we die? Thanks, we are registered, calling various sites, to no avail. We did Phase Finder but NO VACCINES. TOO MANY OF US ARE NOT TECH ORIENTED. HELP PLEASE.”

Many people who don’t know that the Town Toyota Center site requires pre-registered appointments, or who struggled to fill out the web-based registration, simply drove to the site this week hoping to be vaccinated on the spot.

On its first day of operation, around 10 people in that situation showed up per hour, said Rich Magnussen with Chelan County Emergency Management, who was helping direct traffic at the site Friday.

“The No. 1 question we’re getting here is from people who have been trying to get on the website and make an appointment and they haven’t been able to,” he said. “Especially with this age group that are qualified right now, they’ve just been driving down here in person to see if we could try to help them with it.”

But the vaccination process itself has largely gone very smoothly, residents and officials said. People with appointments were in and out within about 20 minutes on Friday — including a 15-minute observation time.

“Once people get here with an appointment, everything has been going really good,” Magnussen said. “It’s just about getting that appointment.”

The Chelan-Douglas Health District and the DOH are working to improve the registration process, Portner said. But the single biggest improvement will come when they can increase the number of available appointments.

“We are making sure the doses that are allocated to this mass-vaccination site are all given out and that determines the number of appointments we are able to offer each week,” he said. “The more doses we get, the more appointments we can schedule.”

And there are signs supply may continue to trend upward in the coming weeks. Gov. Jay Inslee announced Tuesday that Washington’s weekly allotment from the federal government will increase 16% over the coming weeks, The Seattle Times reported.

More than 1.5 million of Washington’s 7.6 million residents are currently eligible for the vaccine and the state is currently receiving about 100,000 first doses per week, the DOH said.

Across North Central Washington’s four counties, 14,453 people have received their first dose, according to the latest DOH data. Of those, 3,396 are fully vaccinated, or about 1.3% of the area’s total population, according to population figures from the U.S. Census Bureau.

For many of the state sites, including Wenatchee’s, the next challenge will come in three weeks when everyone who’s currently getting their first dose will need to return for their second.

“At that point we’ll need to prioritize folks getting their second doses. There is a time window there that we’ll need to be conscious of at that 21-day mark,” DOH’s Portner said.

Officials are hopeful that supply is increasing around the country and “should that trend continue to grow, I think we’ll really have an opportunity to expand the service we have at the site and the number of appointments we can offer,” Portner said.

Next week the site will expand again, offering 700 appointments per day. Should supply continue to improve, officials hope that number will ramp up to 1,000 per day.

Related
What do you want to know about the vaccine rollout?
By Reilly Kneedler
World staff writer
Jan 29, 2021

The Wenatchee World is working to provide as much information as possible about COVID-19 vaccine distribution in North Central Washington. You…

Wenatchee High School bowler Mackenzie Munro throws a rubber bowling ball into the pocket as she and five other teammates practice in the school's auxiliary gymnasium Wednesday night. For a week now the team has been using plastic pins and rubber balls to practice timing and technique, hoping to begin competition in May. For more photos, see a gallery at wenatcheeworld.com.

WENATCHEE — It’s kind of tough to start bowling practice when you don’t have a bowling alley.

However, Wenatchee High School Girls’ Bowling Coach Jeremy Anders found a way to get things rolling, if you will, this past week. 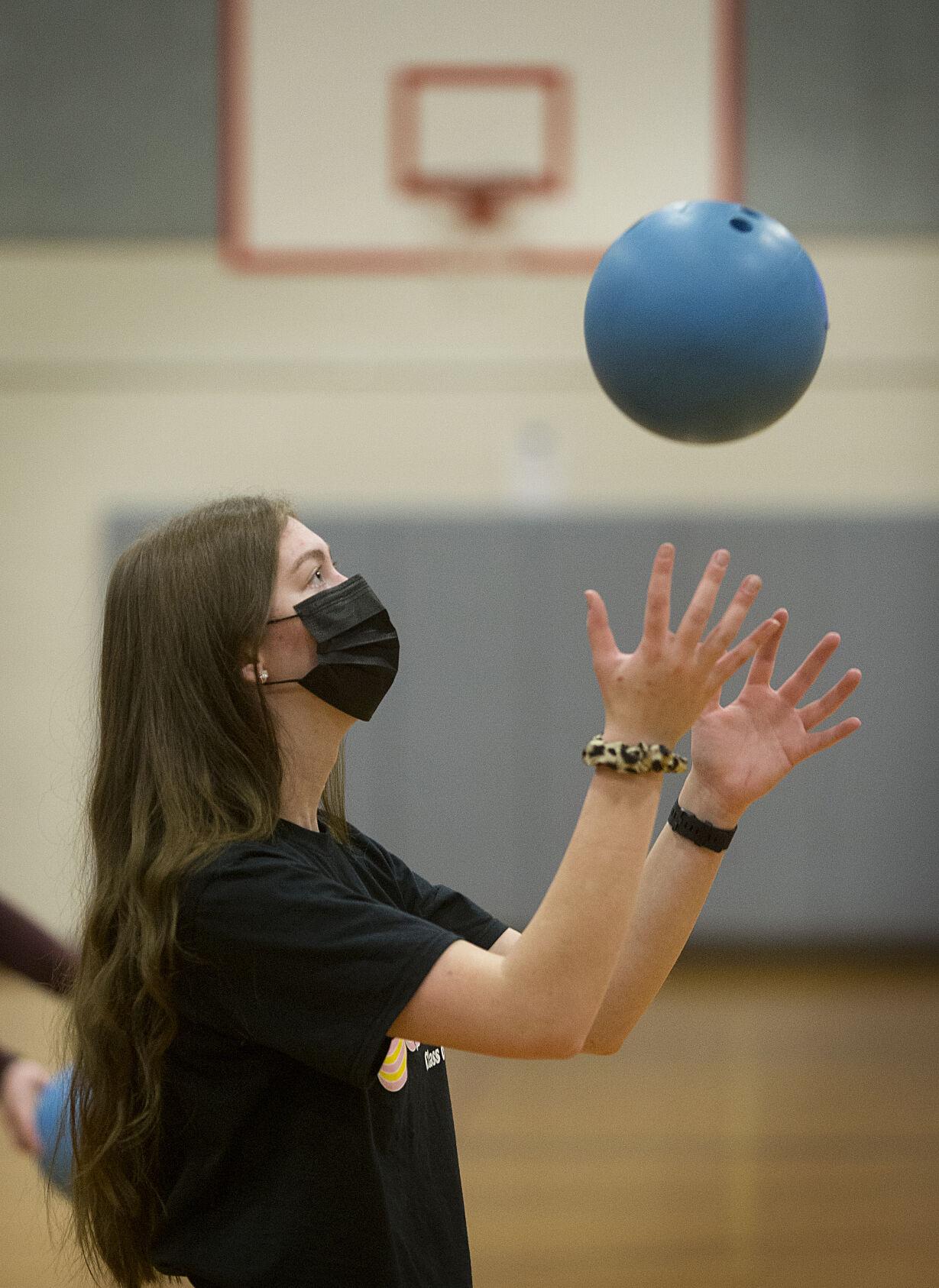 Kylah Hankins tosses up a bowling ball while waiting for her pins to be set by teammate Kayla Musgrove during practice. The balls weigh about two pounds.

With Eastmont Lanes closed for nine months due to the COVID-19 pandemic, Anders and assistant coach Jennifer Thacker were able to set up a portable bowling alley in the WHS auxiliary gym.

They used two sets of six lanes purchased by the Wenatchee Valley Bowling Association for use in local elementary schools.

The lanes are 20-feet long instead of the normal 60 feet. The bowling balls are normal size but are made of rubber with a hollow core, weighing only a couple of pounds, inside of the normal 12-to-15 pounds. The pins are plastic with a little sand inside for weight.

“Most of the girls haven’t touched a bowling ball during that time. We were trying to think of a way to get them active, so when May rolls around and bowling is good to go, we are ready,” Anders said. 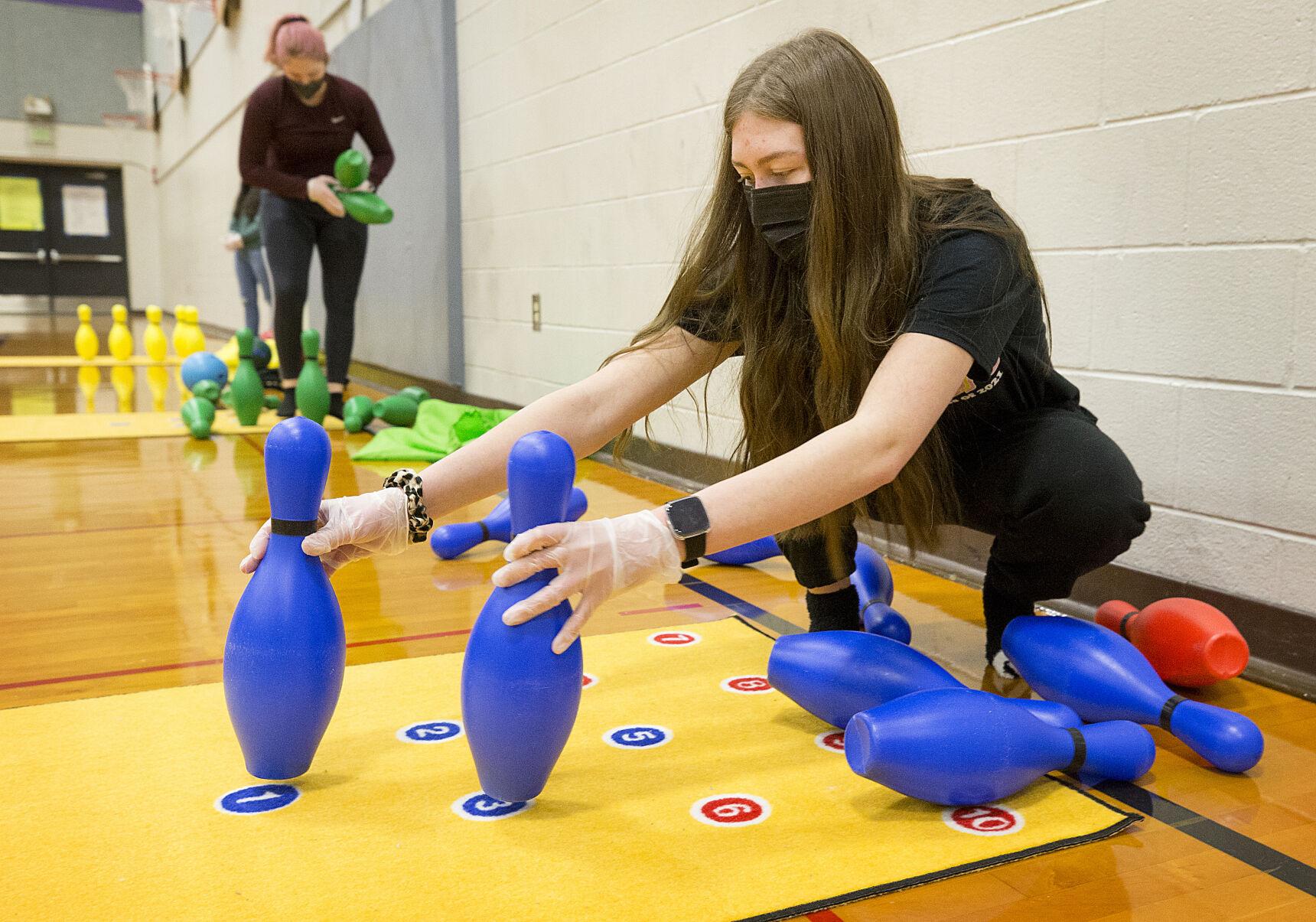 Kylah Hankins sets up a rack of plastic pins weighted with sand.

Anders said they are not working on scores, just timing and release point. So far, after two practices, it has worked out really well. He feels like the girls are getting their timing back.

The biggest thing you can lose in bowling is your timing, he said.

“It was nice to be with the girls and have that camaraderie with them. It was different not to be at an actual bowling alley. It was kind of weird to be in the gym throwing a rubber ball and plastic pins,” said Assistant Coach Jennifer Thacker. 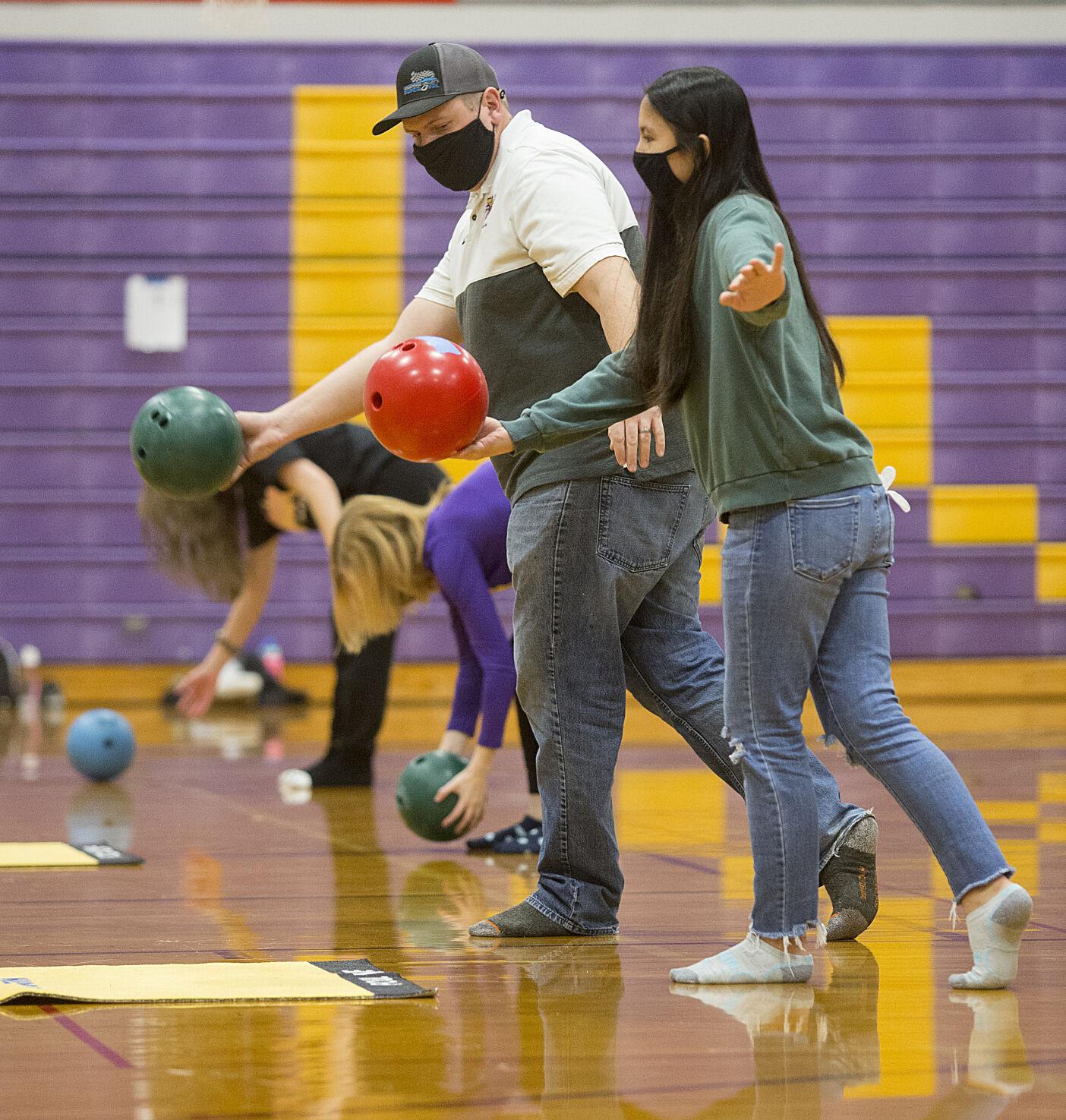 Thacker said the muscle memory is coming back on how to work arms and legs together. In the beginning, she said some girls did not which foot to start with.

“Kyla Hankins has been bowling since she was 5 or 6 years old. I coached her at the bowling alley. I’ve known her. This is the longest she’s ever gone without bowling. She bowled year-round,” Thacker said.

So far, there are eight girls on the team, Anders said. The pandemic has hurt recruiting because he can’t visit girls at lunch or scout talent at the bowling alley. Right now, he’s depending on team members inviting other girls to play. 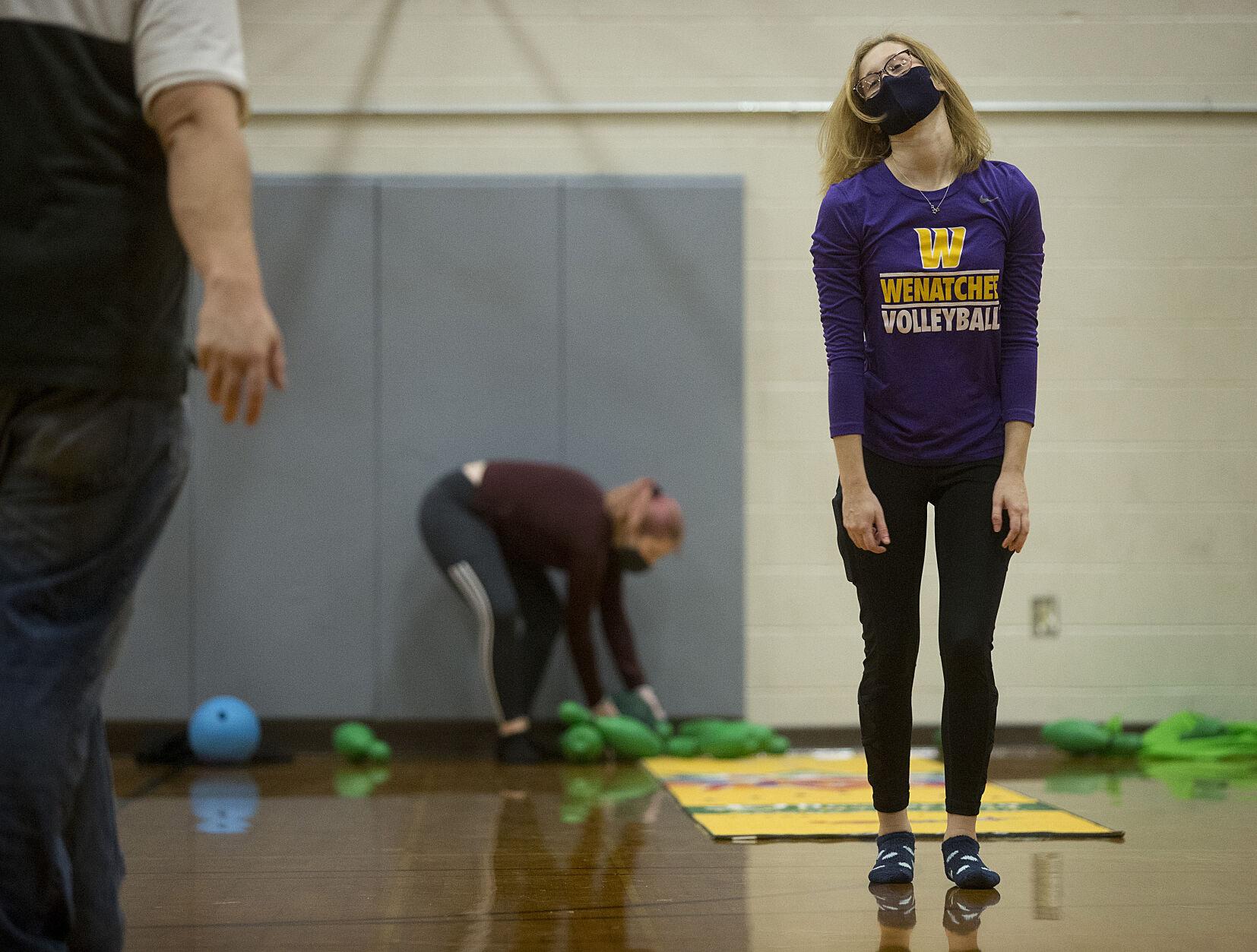 Mackenzie Munro reacts to throwing a strike during.

The commission met Monday and Tuesday to decide on the final makeup of the task force. Community Development Director Jim Brown says the task force will finish work April 23 and a draft of a proposed code could go to commissioners by May 7.

Nash Consulting from Leavenworth will be facilitating the task force discussions.

The members representing neighborhood interests are:

The members representing short-term rentals are:

The two alternatives in case anyone is unable to serve are:

The members of the task force were drawn from letters and comments the county commissioners received, Chelan County Commissioner Bob Bugert said during a public meeting. The commissioners also received recommendations from both STRACC and RUN, as well as some people who self nominated.

Many of the people on the task force, including Lynn and Skinnerland, have been asking the commissioners to set up a dialogue with their respective groups for over a year now.

Brown said Monday during a public meeting that the task force will be focused on:

One of the remaining issues was how many members of the Chelan County Planning Commission would participate and which members. The planning commission members will not be able to vote on the task force, but can provide insight. The commission decided on:

Chelan County Commissioner Tiffany Gering raised concerns that some of the planning commission members might have biases toward the regulations. It was originally supposed to be two members, but on Tuesday Brown said he could not participate in the task force discussions, Gering said.

So Gering nominated Chelan County Planning Commissioner Carl Blum to sit on the task force. Gering raised concerns in the past that Blum would favor heavier handed regulations on short-term rentals.

Gering said she chose Blum, so that the Manson area would be represented and because of his experience working with the short-term rental draft codes in the past. 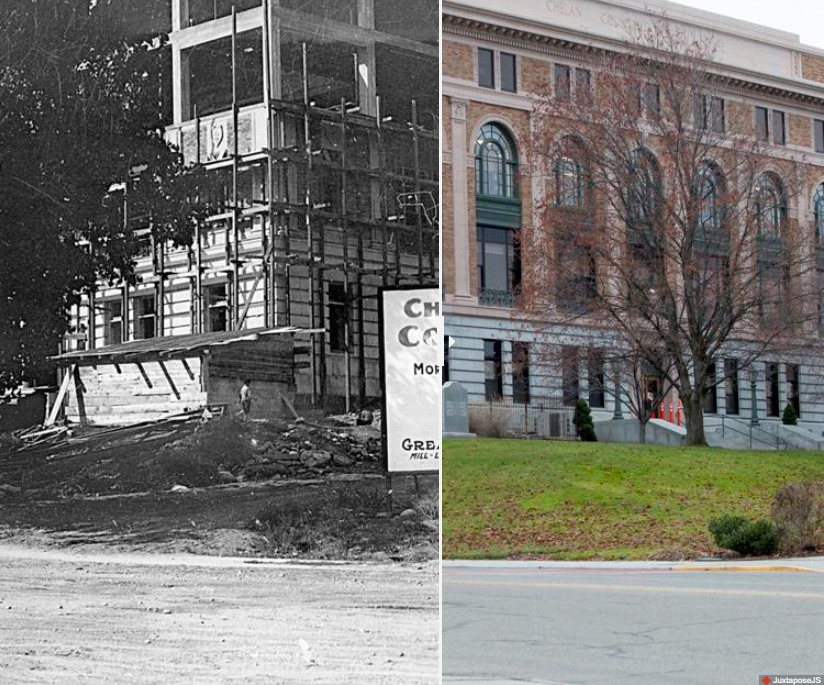 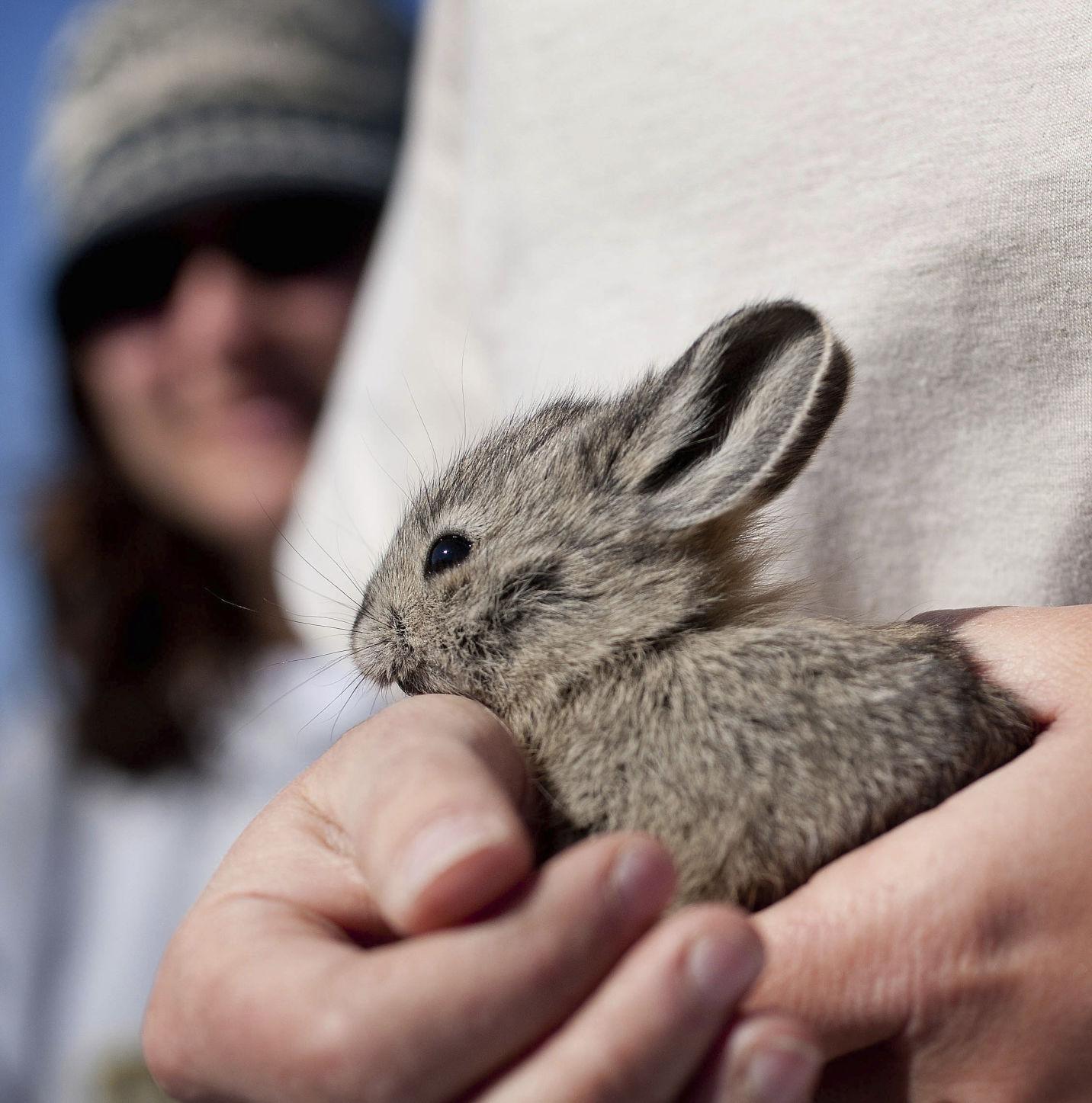 A state Department of Fish and Wildlife biologist holds an infant pygmy rabbit that was captured in the sagebrush of remote Douglas County on May 18, 2012. 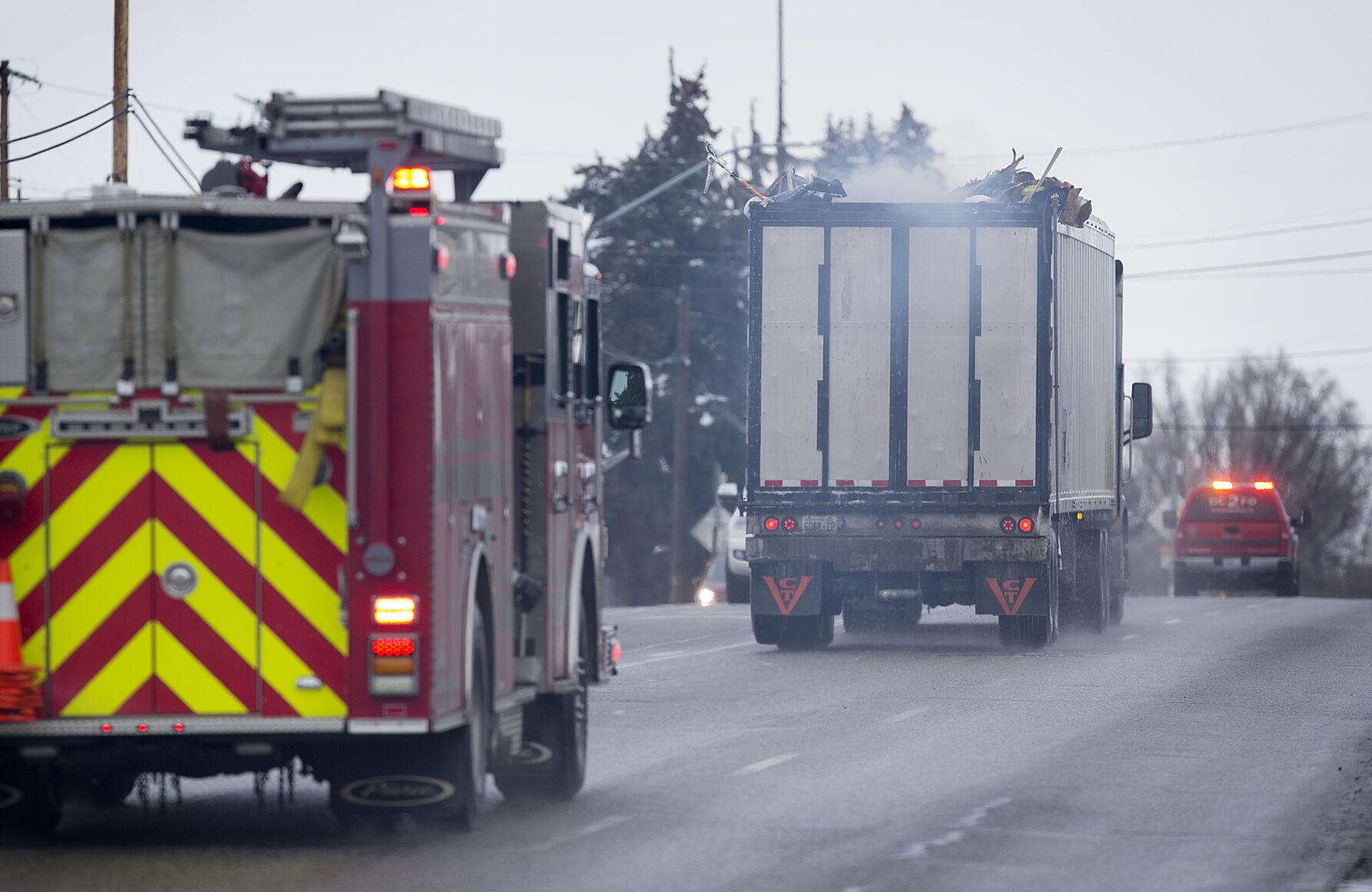 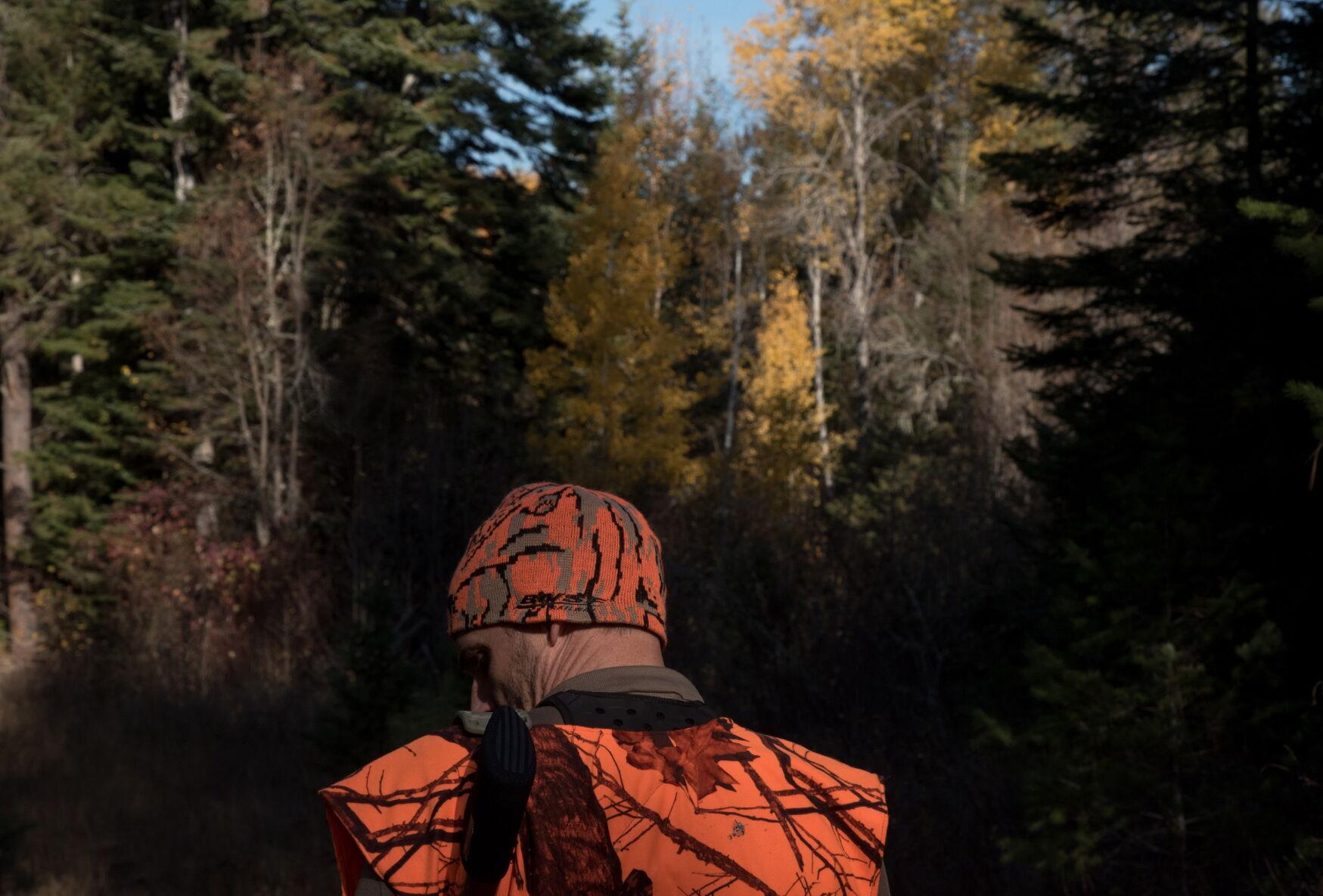 Firehouse Pet Shop's resident feline, Mr. Carmen, inspects the new shipments, and their containers, as part of his service.