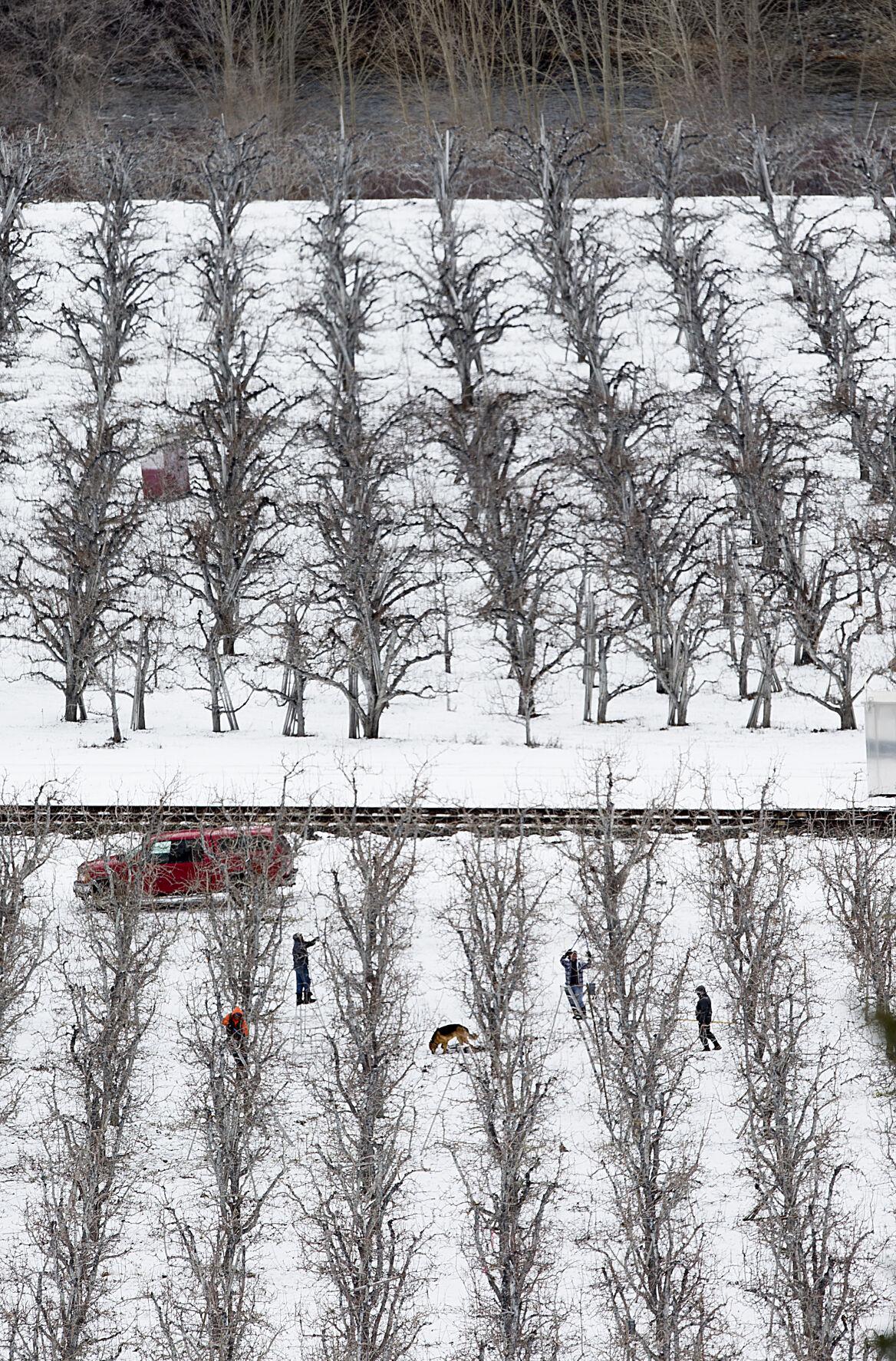 A crew of pruners makes their way through an orchard west of Cashmere Dec. 29. Mild temperatures made ideal conditions to take care of the annual tree maintenance.

LEAVENWORTH — The Cascade School District is planning a pair of levies for the Feb. 9 ballot: a four-year educational programs and operations levy and a four-year technology and safety levy. Both levies need 50% or greater to pass. 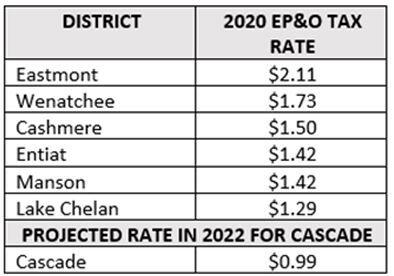 “We gain a benefit from the size and value of the property we have in the district. It helps to keep the rate lower,” Remick said.

The levy provides funding for facilities support, student services and safety, such as a resource officer, counseling and mental health resources. It also funds instructional technology and district learning improvement.

“It represents about 20% of our overall budget. When looking at the fact that about 85% of what we spend as a district is salaries and benefits. It does include a lot of staffing,” Remick said. “It runs the full gamut of our operation.”

Remick said some of it has to do with the makeup of the district with schools spread between Leavenworth, Peshastin and Plain.

“We have expenses for extra equipment transporting kids back and forth. Those kinds of things. Having four buildings versus three. Different programs are key to our community and the makeup of our community that it supports,” he said. 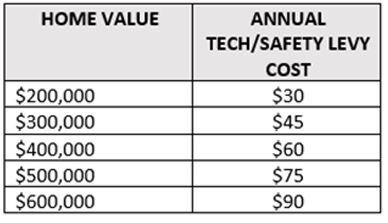 Remick said they need funds for safety, mainly for Icicle River Middle School. With a new elementary school, Alpine Lakes, and remodels at Cascade High School and Peshastin Dryden Elementary School, he said they need to bring the safety systems at IRMS equivalent to those at the other schools, including key lock entries and security cameras.

“We did one four years at 15 cents per $1,000 (tech levy), which is what we are asking for again. We’ve been fortunate to have state of art in everything with the new buildings,” Remick said. “Technology is advancing faster. We’re thinking three or four years on most of our equipment. We’re finding it is two to three years when things break or become obsolete. That has provided some additional challenges.”

Shane Earl Hagen's arraignment date was changed after this story was published. The story has been updated.

Detectives with the Wenatchee Police Department say Hagen and Ripper on Dec. 23 entered an apartment on the 600 block of Idaho Street and then shot and killed 36-year-old Jesus Manuel Garcia, according to a probable cause affidavit filed in Superior Court.

A woman who was in the apartment when the shooting occurred told detectives she was smoking cigarettes with Garcia when she heard people storm into the building and say something to the effect of, “Come out! Where are you?” the affidavit said.

Garcia left her to confront the people and then she heard what sounded like a physical fight. She told detectives she saw a white male with a gun standing over Garcia and another man she later identified as Shane Earl Hagen standing nearby, the affidavit said. Then she heard three to five gunshots and closed the door.

She told detectives she next heard Garcia calling out for her and that she re-entered through a bathroom window and then attempted to help Garcia outside, but couldn’t, the affidavit said. She called 911 and began dragging him toward the front of the home.

The shooting occurred about 3:20 p.m. Police would later recover a gun and brass knuckles near the living room.

A woman who lives at the apartment offered detectives another, slightly different, account. She told detectives she was away from her home with Hagen when she received a text message saying a man was going in and out of her apartment, the affidavit said.

She told detectives Hagen offered to accompany her to investigate. While in the Idaho Street apartment, she said she heard Hagen say “Is that a gun?” followed by a gunshot, the affidavit said.

The woman told detectives she left through a bathroom window and then circled around to the front of the apartment where she saw Hagen leaving with an obvious leg wound, assisted by two men she didn’t know, the affidavit said. Hagen was then taken to the hospital.

At 3:45 p.m., officers were notified of a gunshot victim was admitted to the hospital and responded under the suspicion that it was related to the Idaho Street shooting. Police spoke to Hagen in the emergency department where he was being treated for a gunshot wound to the calf, the affidavit said.

Hagen told officers he accidentally shot himself while shooting in No. 2 Canyon and that the people who drove him to the hospital didn’t remain at the hospital due to COVID-19 protocols, the affidavit said.

The driver of the Ram and another woman who was at the scene, but not in the apartment, were also interviewed by police. Both told police that Ripper was at the apartment when the shooting occurred.

Surveillance footage from outside the apartment appears shows Hagen and Ripper at the scene before and after the shooting, the affidavit said.

In the affidavit, detectives said they don’t have direct evidence to show Ripper in possession of a gun, but believe there is enough evidence to show he’s the white male seen standing over Garcia by a witness.

Hagen and Ripper are being held at the Chelan County Regional Justice Center on $1 million bail. Both are scheduled to be arraigned Jan. 6 in Superior Court.

Developers have filed building permits for the Riverfront Village apartments, a five-building complex on Wenatchee's waterfront. The project site is a quarter-mile south of Riverside 9 and 600 Riverside, two large apartment complexes owned by Weidner Apartment Homes.

WENATCHEE — If completed, the Riverfront Village Apartments would be the largest single housing complex in Wenatchee.

The developer behind the project last week applied for building permits, bringing the complex one step closer to life and setting the stage for the next chapter of Wenatchee’s downtown waterfront development.

The project would include about 454 units spread across five buildings standing five stories tall. They would be located on the former Lineage Logistics campus on the corner of North Worthen and Fifth streets.

The developer is Redmond-based Anandacom LLC, a commercial real estate company that builds and manages a range of residential and retail projects, according to its website.

The only active project listed on its website is Wenatchee’s, which it says will “set a new standard for the city.”

The complex was first proposed in January 2020 when the company filed a request for a pre-application meeting with the city of Wenatchee. Since then, the developers have been working with the city to adapt their plans in preparation for permit applications, Community Development Director Glen DeVries said.

WENATCHEE — A 455-unit apartment complex has been proposed for the northern Lineage Logistics property, along Riverfront Park at the base of Fifth Street in Wenatchee.

The layout has changed slightly since then, but the overall scope of the project is very similar to the original plan, according to documents filed with the city.

The current plans call for three 99-unit buildings, one 84-unit building and one 73-unit building. A one-story recreation building, a pool and roughly 540 parking spaces are also planned.

The existing vacant cold-storage and office buildings on the site would be demolished to make way for the apartments, according to the documents.

The building permit applications were received last week and are now under review with city planners. Once that’s complete, the general public will have an opportunity to provide feedback on the proposal.

A timeline when of construction may start or end is not yet clear, DeVries said.

If approved and completed as planned, it would offer almost exactly the same number of units as the Riverside 9 and 600 Riverside apartments combined. Those two complexes, which are owned by Kirkland-based Weidner Apartment Homes, are also just a quarter-mile away from this project.

The project site is currently owned by Lineage Logistics, a fruit storage company that decided to sell its two main campuses in Wenatchee last year.

The southern campus, on the corner of Orondo and Columbia streets, was purchased by the Chelan Douglas Regional Port Authority last year. The port is now dividing up the property and selling the pieces for private redevelopment.

This northern property is 7.83 acres and tucked between Riverfront Park to the east and the BNSF Railway tracks to the west. Beyond its innate value, redevelopment of the property has drawn extra attention due to its proximity to the current Chelan County PUD headquarters, which is just across the railroad tracks.

After the PUD moves into its new consolidated headquarters in Olds Station in a few years, the existing campus will be redeveloped. Planning for that process is underway now but no concrete plans for the property have been decided.