WENATCHEE — It was a beautiful night in the Wenatchee Valley Friday as both Eastmont and Wenatchee high schools celebrated their class of 2021 graduation ceremonies, Wenatchee in the Apple Bowl and Eastmont at Wildcat Stadium.

What a difference a year makes. 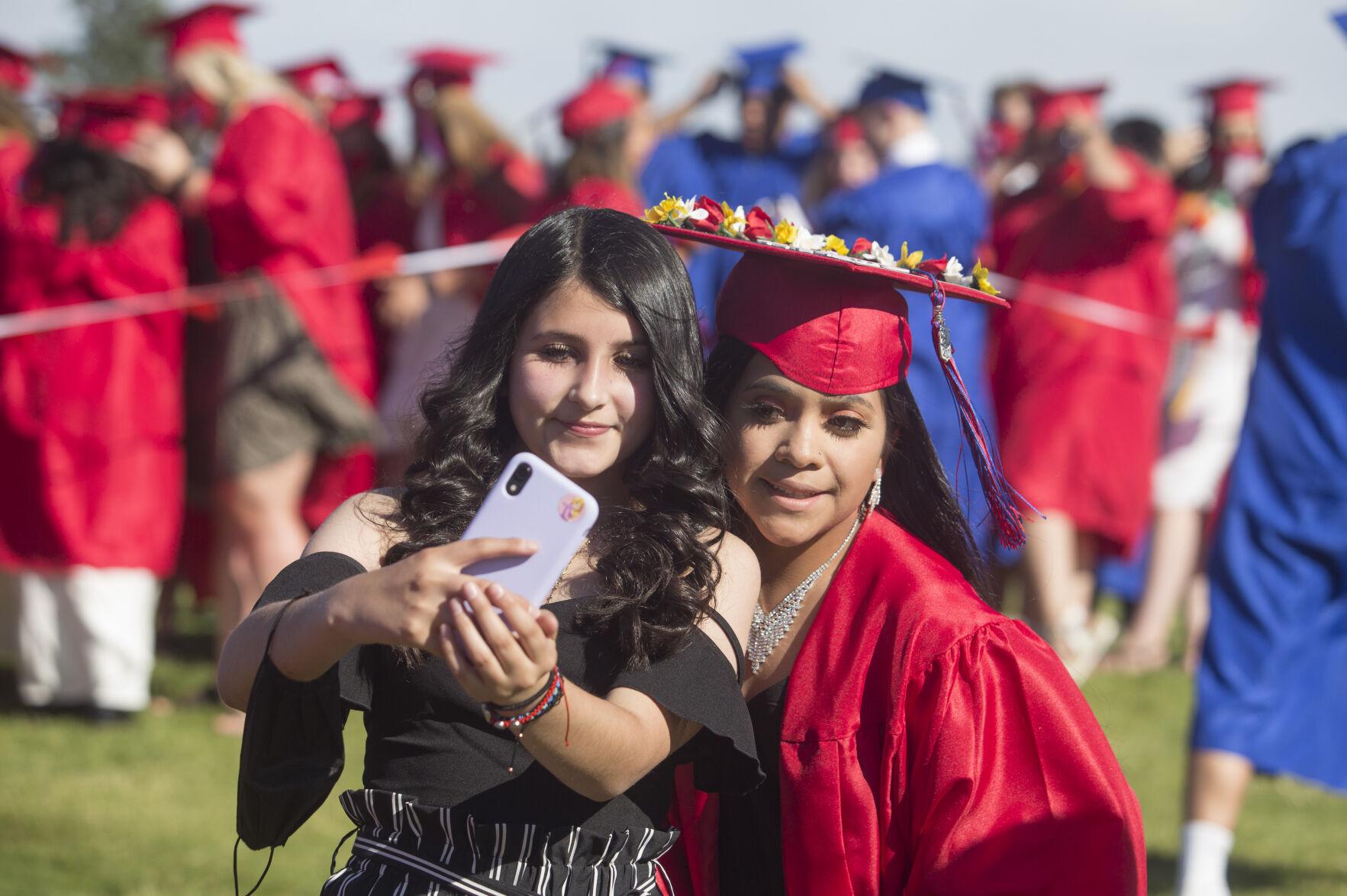 In 2020, the COVID-19 pandemic forced both schools to hold virtual graduation ceremonies. This year, the ceremonies were in-person — albeit with many precautions for the ongoing pandemic.

“Obviously, social distancing and some of the COVID regulations are still in play,” said Diana Haglund, a Wenatchee School District spokesperson. “We did have to limit the number of people who came to the Apple Bowl, so that is a little bit different.” 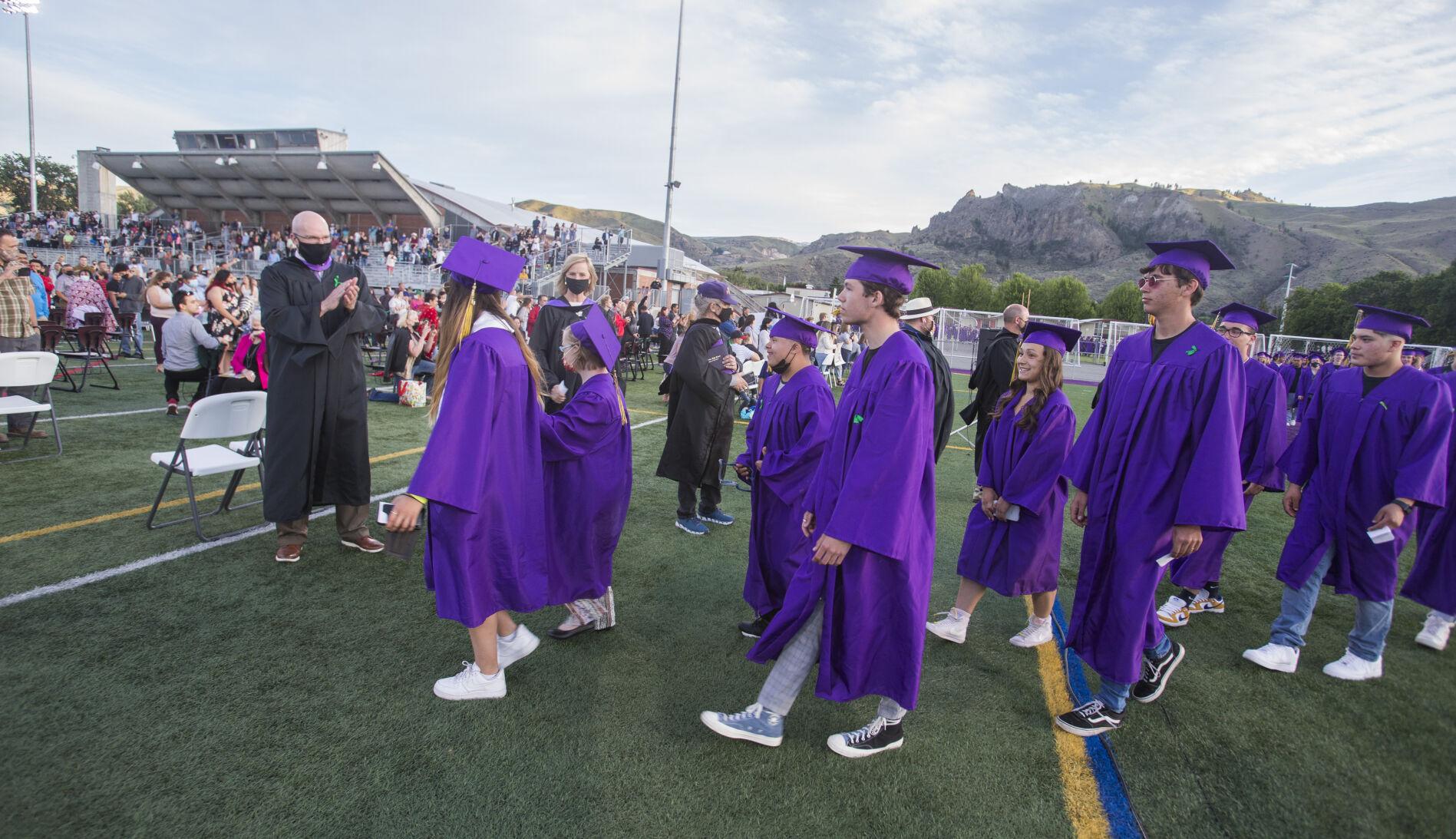 Those in attendance were seated in pods of four in both locations, on the field and in the stands. 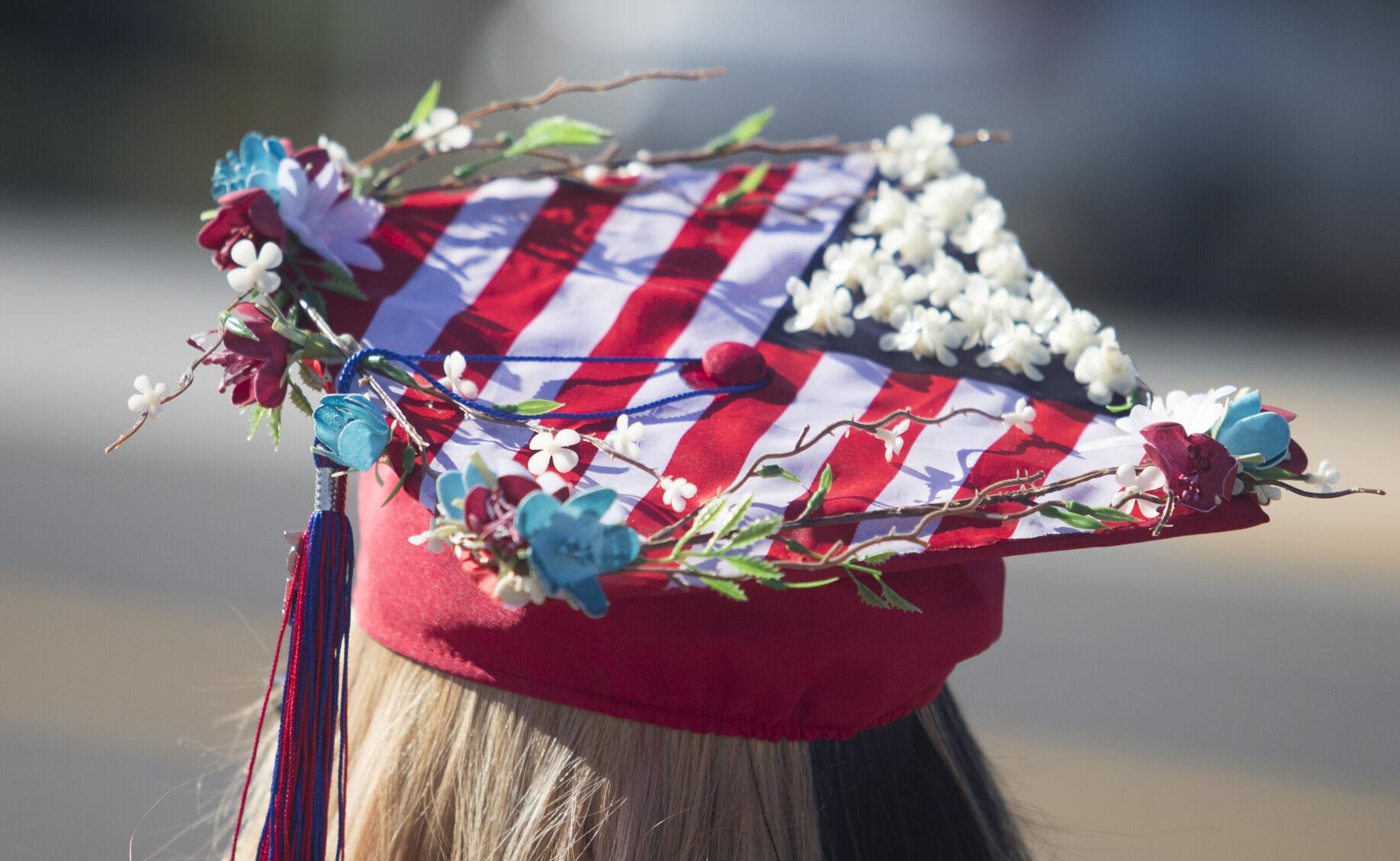 “In our bleachers and on the field, we have pods of four seats where families can sit with six feet of distance between them. That was quite a chore mapping all that out,” said Eastmont High School Assistant Principal Stacia Hardie, “That way a family unit can get together.” 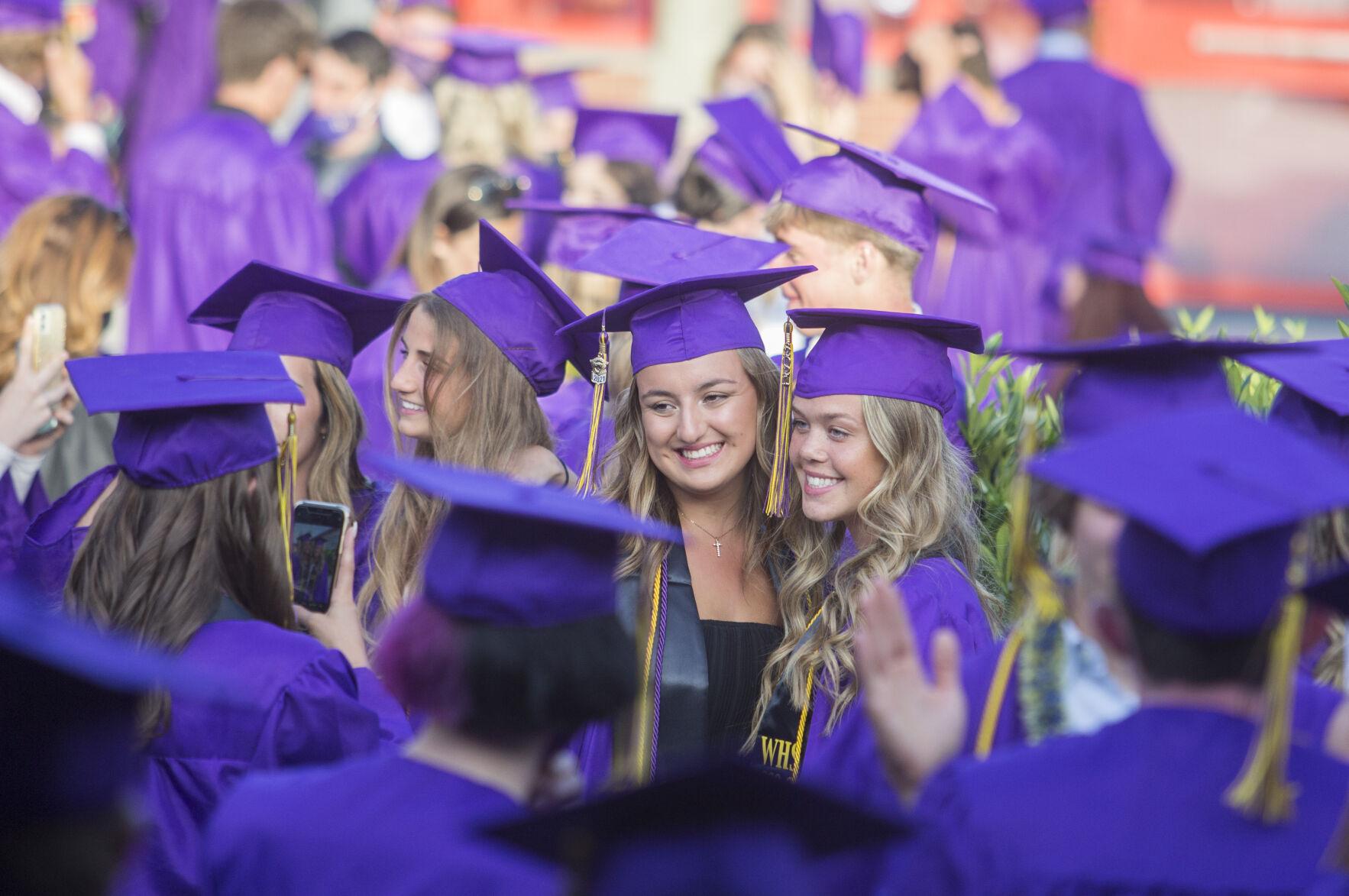 Both schools also had large screens at each location to allow those distant to see the speakers better but also display the prerecorded parts of the program. Wenatchee presented a pre-recorded speech by Alumni of the Year Heidi Schreck. And all of the musical performances, which would normally be presented live, were pre-recorded for the big screen.

Normally, Eastmont graduation is held at Town Toyota Center but due to COVID-19 restrictions, Hardie said they decided to hold the ceremony at the Wildcat Stadium.

For Wenatchee, having the ceremony at the Apple Bowl was all about maintaining a longtime tradition. 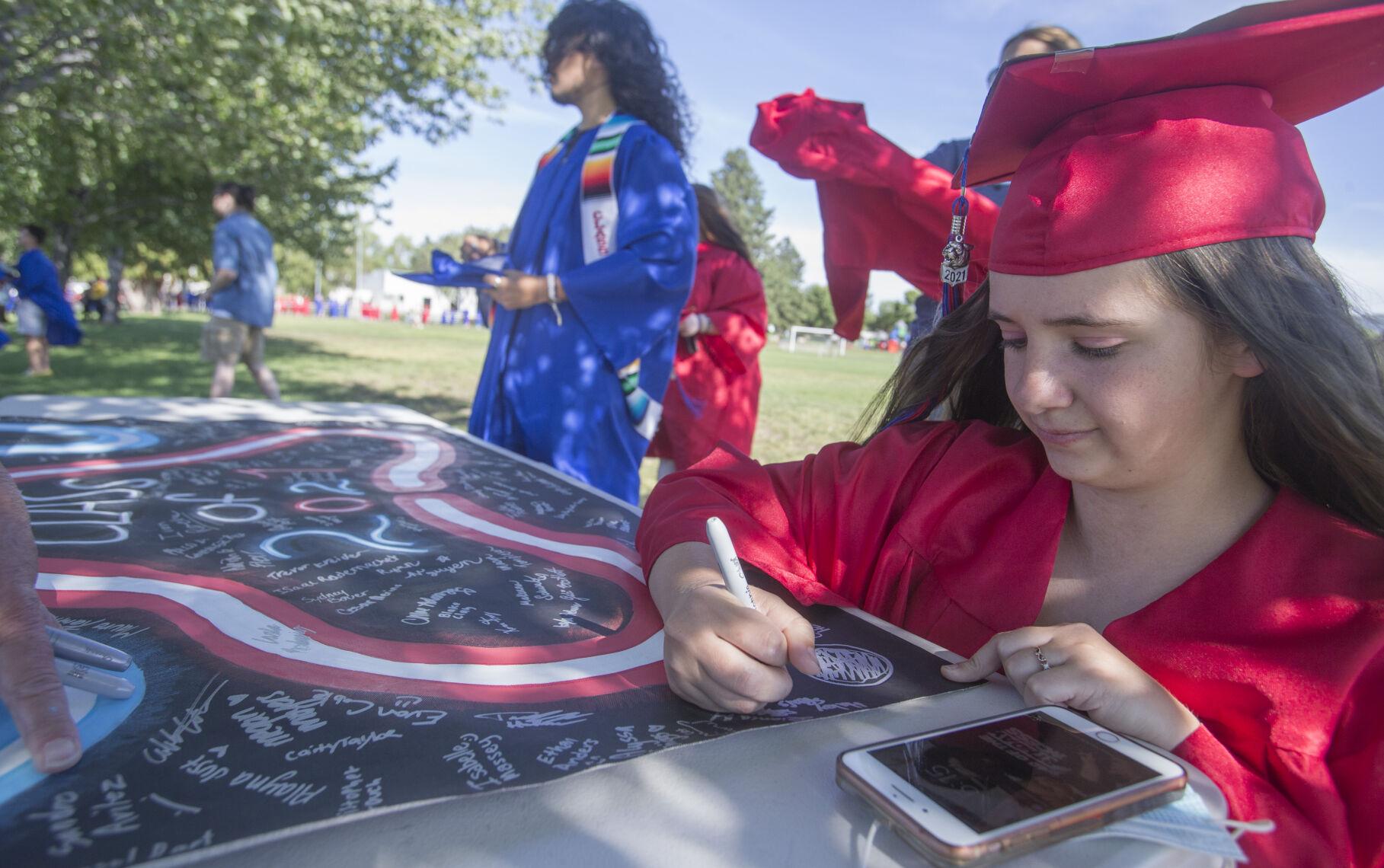 Haley Spears on Friday signs the “paw print,” a canvas art piece with the signatures of 2021 graduates. It’s displayed in the commons area of Eastmont High School  along with other classes' “paw prints.”

“It feels more normal and that feels really good just to have the students be able to enjoy the traditions we have enjoyed for so many years. The fact of being on the field at the Apple Bowl really is a moment in our graduates’ lives that they look forward to. It’s just a location but it is more than that,” Haglund said.

While both ceremonies were different because of the many COVID regulations, the seniors were able to enjoy the typical activities leading up to graduations.

Many Wenatchee seniors arrived at school graduation morning in traditional style — on roller skates, roller blades, scooters, skateboards and bicycles. They also brought back their senior walk through Wenatchee High School surrounded by their peers and staff. After that, the seniors enjoyed a parent celebration before graduation rehearsal.

Eastmont seniors had their senior scooter ride down Eastmont. Then, they had their senior celebration with parents before the graduation rehearsal on Thursday morning. On Wednesday, there was an awards ceremony for seniors in Wildcat Stadium and that night was prom.

On graduation night, Eastmont announced their boy and girl of the year. Max Prazer was the Boy of the Year and Makenna Schwab (who is featured on Page A9), was the Girl of the Year. 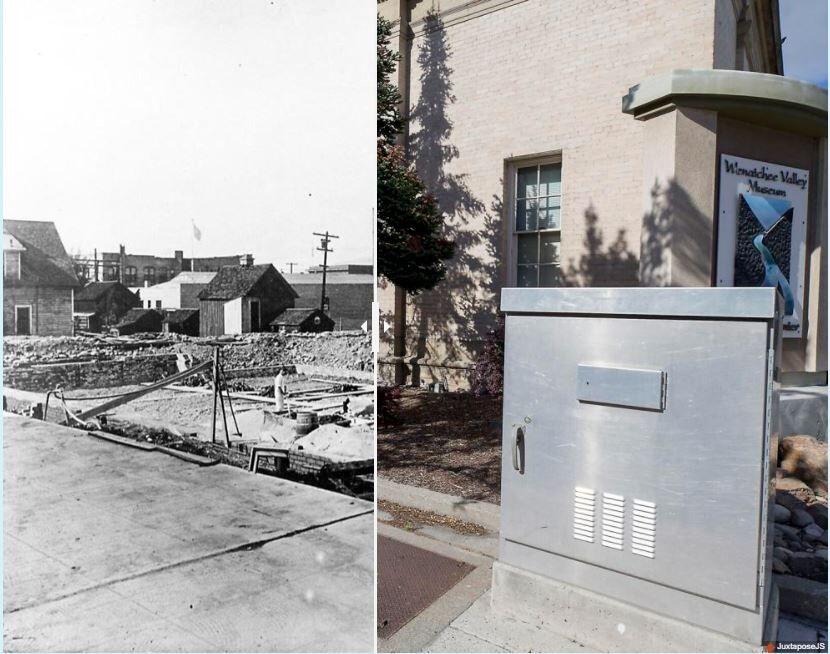 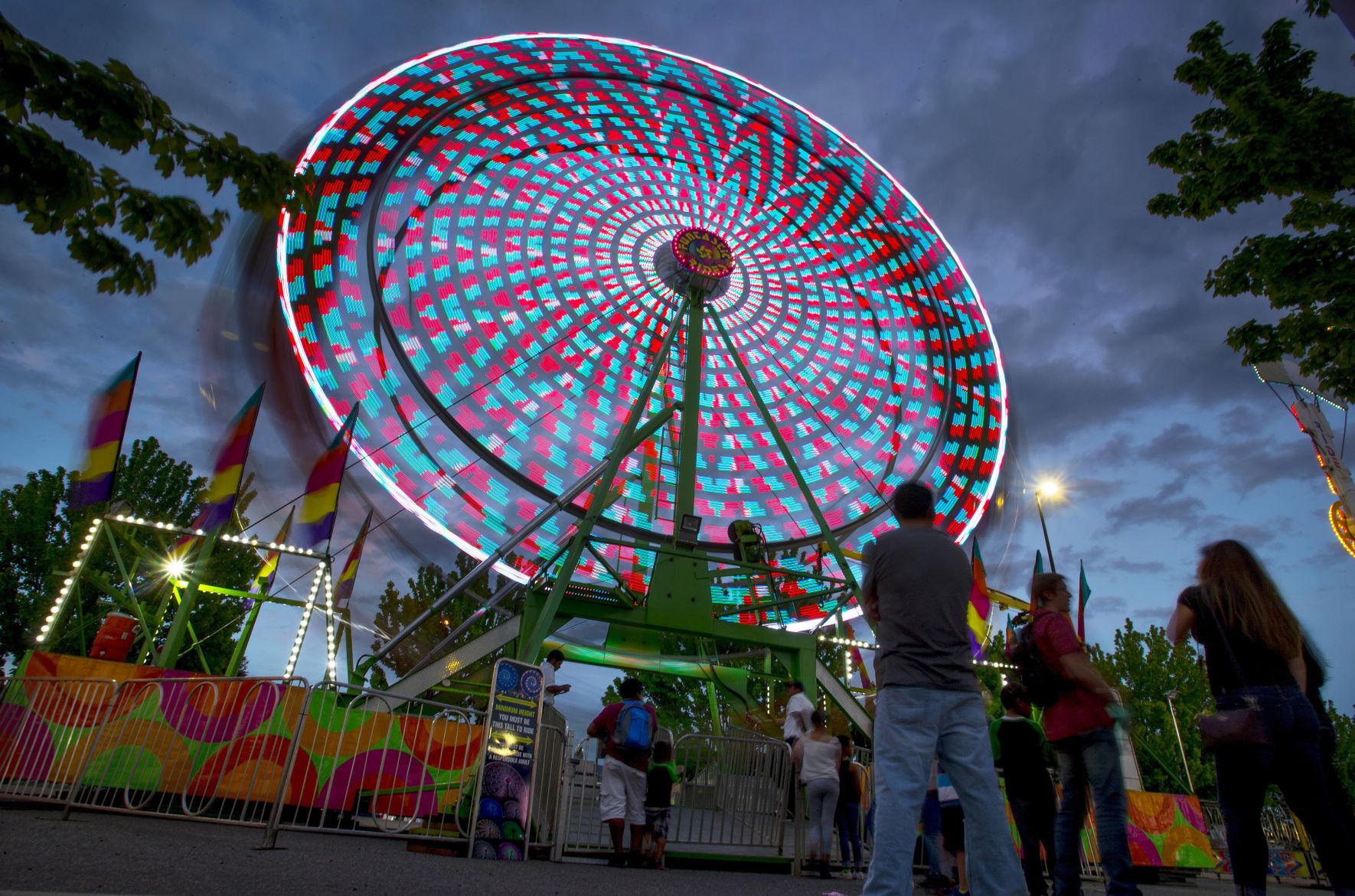 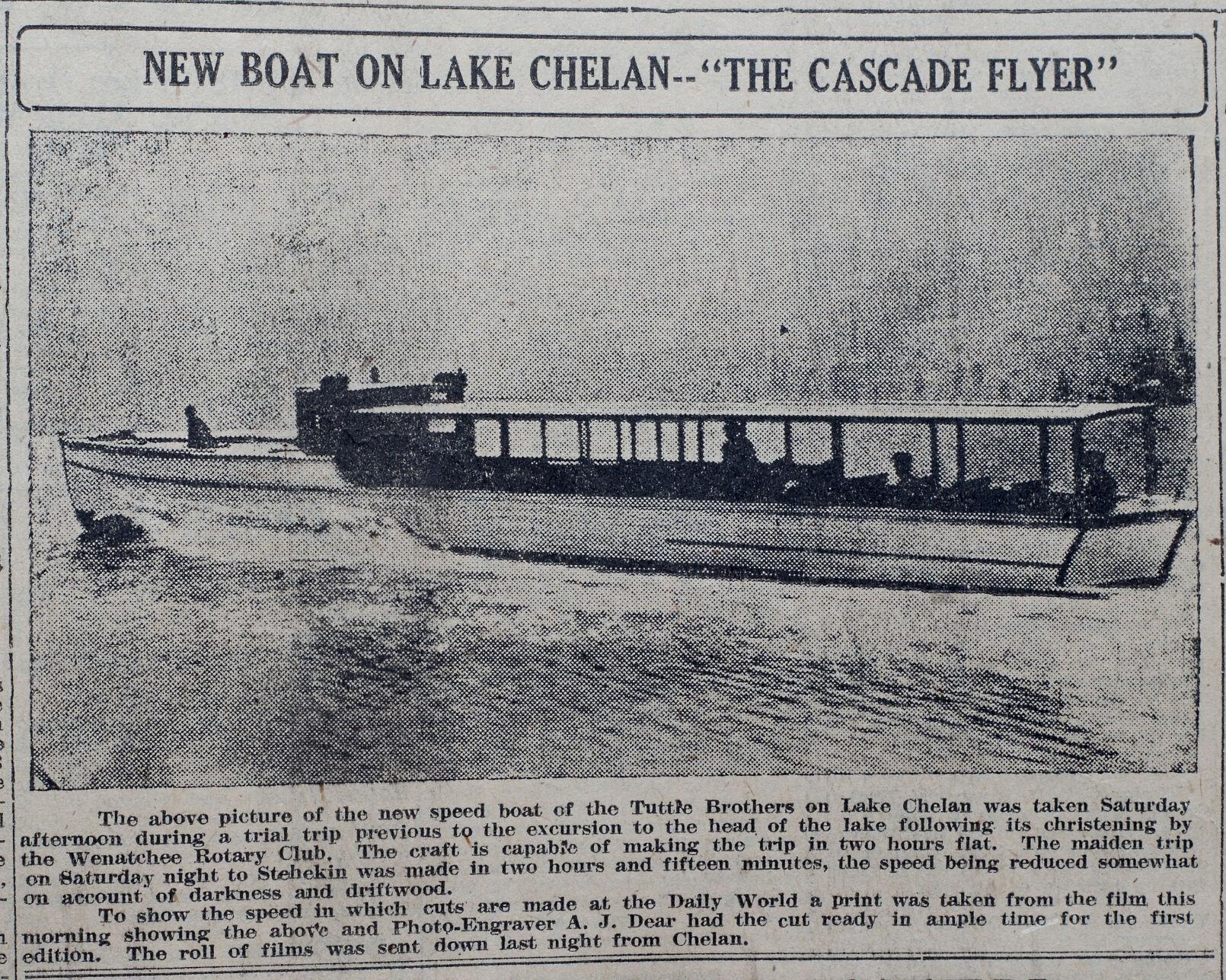 A photograph of the Cascade Flyer graces the front page of The Wenatchee Daily World on June 6, 1921. Along with the news of the new boat that cut the trip from Chelan to Stehekin to 2 hours, the speed of getting a photograph in the first edition of the newspaper was featured in the last paragraph of the caption. There were numerous boats that were used over the years to travel up and down Lake Chelan including stern-wheelers. This passenger boat was claimed to be the fastest in the Pacific Northwest. It could carry 65 passengers. 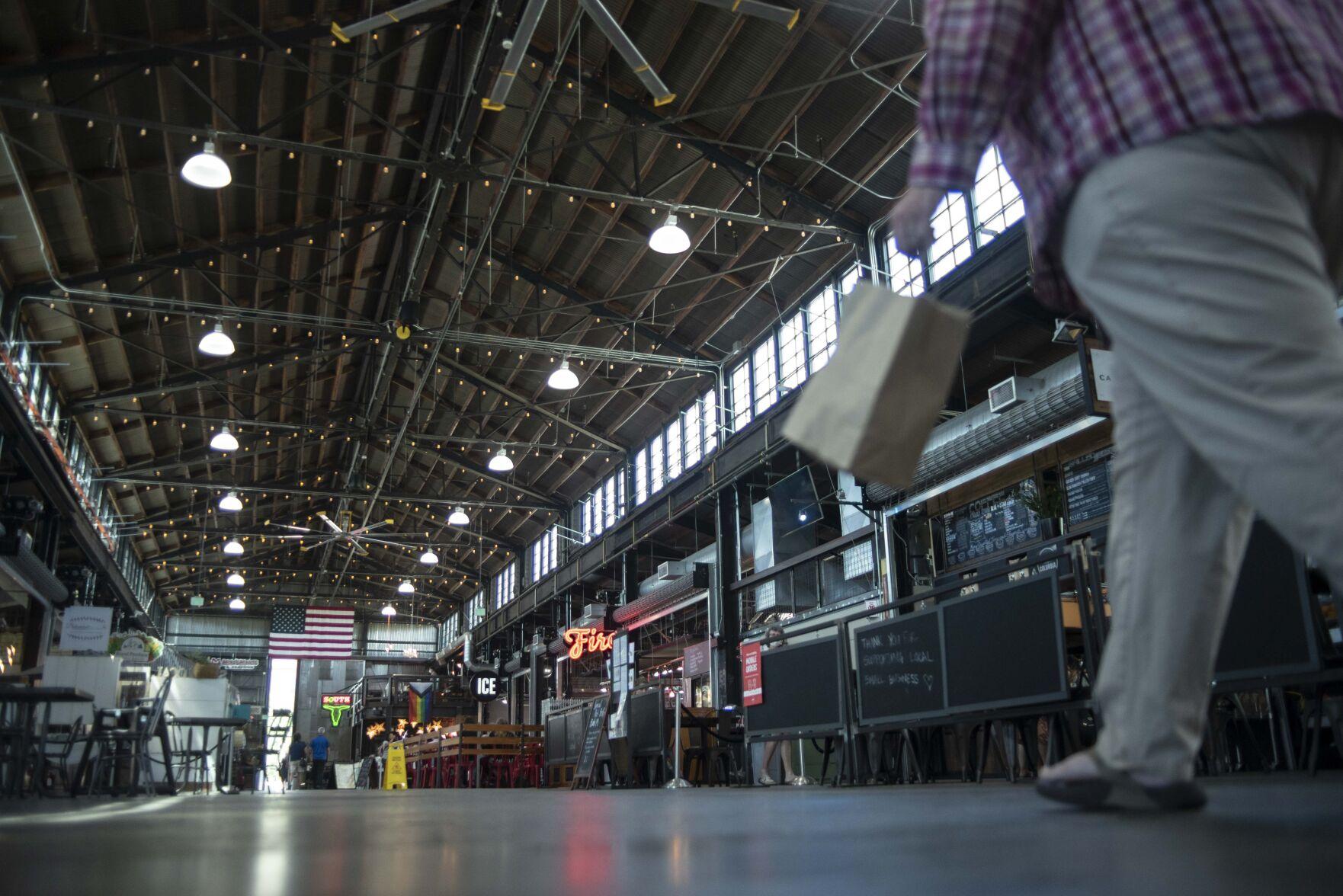 Tammy Grubb heads out of Pybus Public Market after stopping to buy cheese at The Cheesemonger's Shop on Friday. The market's indoor tenants have returned to pre-pandemic hours. Live music also has returned on Wednesday and Friday evenings. 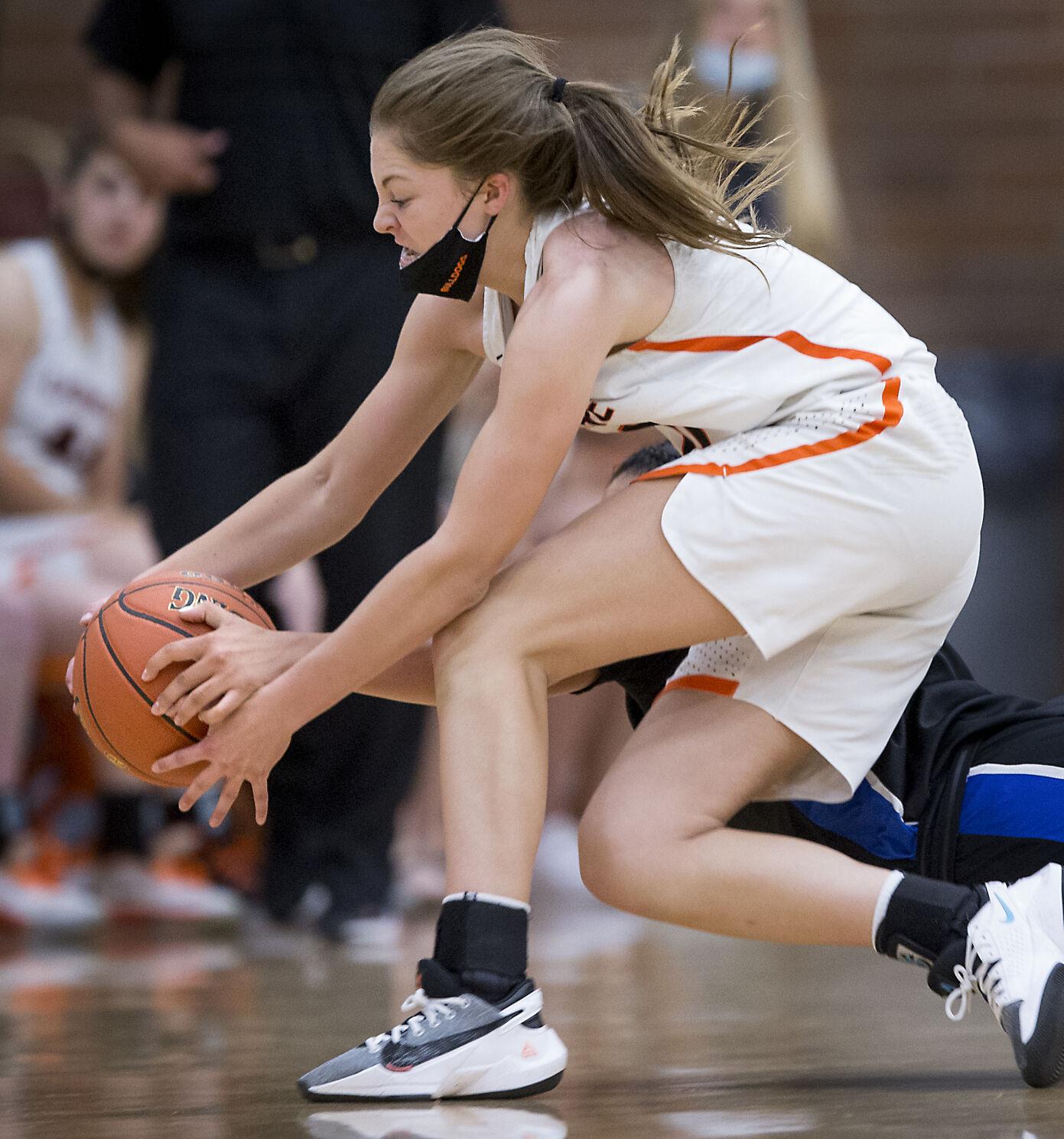 World photo/Don Seabrook Cashmere's Kaitlyn Bjorklund tries to keep Warden's Kiana Rios from grabbing the basketball from her in the second quarter of their game Thursday night, June 3, 2021, in Cashmere. Cashmere committed multiple turnovers in the game as well as being outrebounded to finish with their first loss of the season 63-36.

OLYMPIA — All Washington residents who receive a COVID-19 vaccine will be entered into a lottery with four weekly drawings of $250,000 and one final $1 million prize, Gov. Jay Inslee announced Thursday.

The lottery is part of a larger vaccine incentive program that includes other prizes such as college tuition assistance, sports tickets, airline tickets and gift cards.

All residents who have been vaccinated already are eligible and don’t have to do anything to enter.

The drawings will come from the Department of Health’s vaccination database. Anyone else who wishes to become eligible only needs to get their first shot, Inslee said, but it may take up to three days for their name to appear in the DOH database.

“We are providing a shot of a lifetime in this incentive package,” Inslee said Thursday.

Inslee said the state will reopen on June 30 even if the state does not hit the 70% vaccination goal, but he is hoping these new vaccine initiatives will help the state get there sooner.

The funding is a mixture of state funds and federal COVID-19 relief funds, but Washington State Lottery Director Marcus Glasper said the exact breakdown is still being worked out.

Glasper said each name in the vaccine database will be converted to a number, and the lottery’s random number generator will draw numbers each week. The department will then contact the winner who will have three days to claim their prize.

The state is offering higher education incentives. The state will give $1 million directly to the public four-year universities and two-year community and technical colleges. The institutions can run their own drawing for free tuition and expenses for vaccinated students. The state will offer 30 prizes of one year of tuition college credits for 12- to 17-year-olds.

Secretary of Health Dr. Umair Shah said he hopes the incentive program will encourage people who are “still thinking about it or still on the fence.”

“We want to make sure you do everything you can to go ahead and get vaccinated today,” he said.

Washington joins a dozen other states and President Joe Biden in offering vaccinated residents cash prizes and incentives for getting vaccinated.

Ohio Gov. Mike DeWine became the first when he announced last month a $1 million prize for five people 18 years and older who receive a COVID vaccine. Five people ages 12-17 will win a four-year, full-ride scholarship to an Ohio state college or university. According to the Ohio Department of Health, vaccinations for those 16 and older increased by 28% the weekend following the lottery announcement.

California is offering $1.5 million each for 10 residents who receive a vaccine while New Mexico is offering $10 million in prizes, including a $5 million grand prize.

Nationally, Anheuser-Busch said it would buy Americans 21 years and older a round of beer if Biden’s vaccination goal of 70% is met.

As of Wednesday, only 41% of the country was fully vaccinated.

Related
Everything you need to know, so far, about vaccine lottery
By Amanda Zhou
The Seattle Times
Jun 4, 2021

Some details are still in the works but here’s everything you need to know so far about the state’s vaccine lottery incentive.

Local
Jobs on the rebound, but still a ways to go for full recovery

WENATCHEE — Led by manufacturing and leisure and hospitality sectors, jobs in Chelan and Douglas counties are on the rebound.

Statistics from the state Employment Security Department for April show dramatic improvement over a year ago, when the pandemic shuttered businesses and the employment rate climbed to 16.1%. This year, April’s employment rate is at 6.4%, showing a return of 5,100 of the nonfarm jobs lost last year. 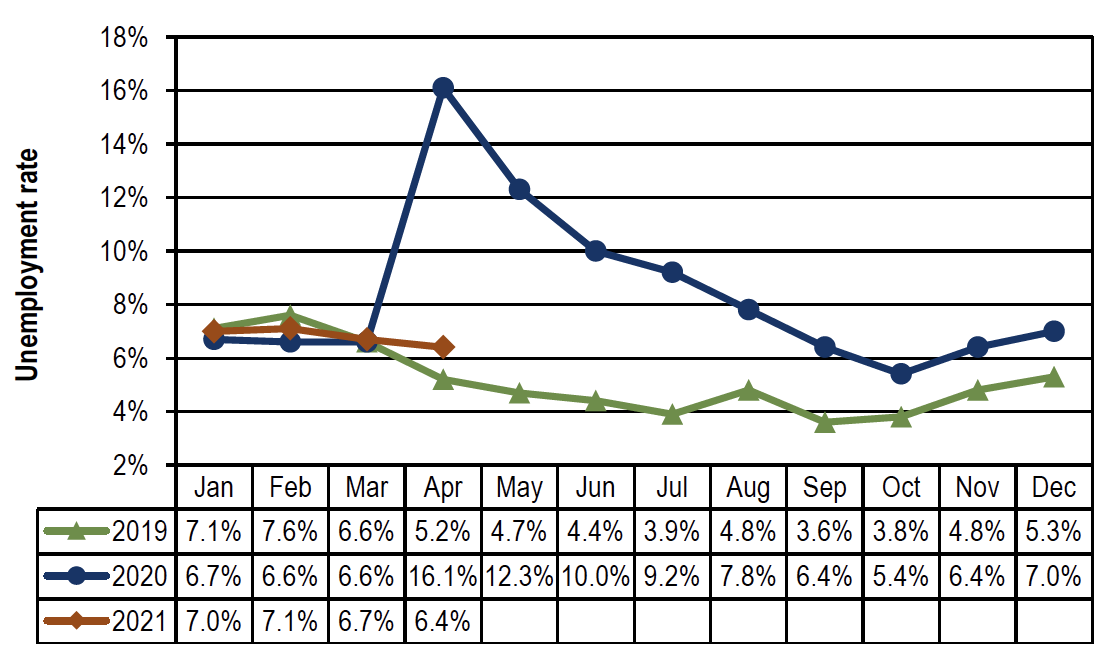 The unemployment rate for the Wenatchee Metropolitan Statistical Area, which encompasses Chelan and Douglas counties, fell between April 2020 and April 2021.

“This upturn was encouraging economic news,” regional economist Don Meseck in his Labor Area Summary report released Thursday. “This April’s 12.9% and 5,100 job increase was the first month in the past 12 months — since the start of COVID-19 related layoffs in April 2020 — in which the labor market registered year-over-year job growth.”

The two industries accounting for the biggest local turnaround are:

Both industries are ahead of statewide percentage increases. Those two sectors also are ahead of the jobs tallied in March, with manufacturing up 100 jobs and leisure and hospitality up 300. Leisure and hospitality jobs were hit harder than any other sector in the Wenatchee Metropolitan Statistical Area, Meseck said. The current total of 5,900 jobs is still down 800 jobs from April 2019’s 6,700 jobs.

The construction industry, also one of the most active in the region, saw a 500-job boost this April compared to last April, but, with 3,000 jobs, was even with the figures from March. That also was the case with retail jobs, which accounted for 6,400 jobs this April, echoing the numbers from the previous month, but up 1,100 jobs (20.8%) from April 2020.

Meseck noted that the subsector accounting for more than half of the added retail jobs were in “other retail trade” which are internet shopping firms.