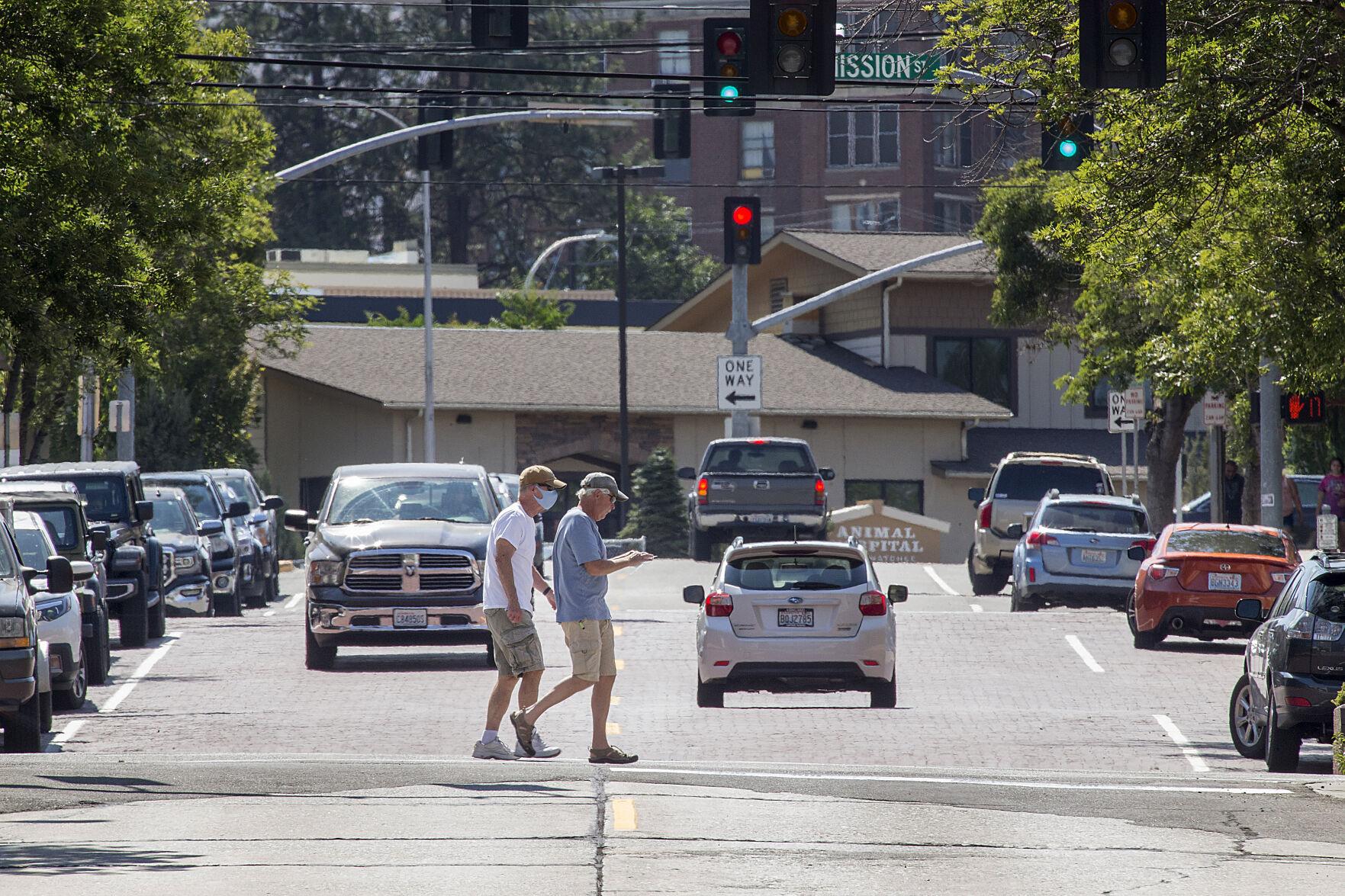 World photo/Don Seabrook Downtown Wenatchee, here looking west on Palouse Street on Wednesday, July 29, 2020, is busier now than in earlier months of the Covid-19 pandemic but foot traffic is still light and with masks.

LEAVENWORTH — In a 24-hour period between Tuesday and Wednesday, four injured hikers or climbers were airlifted out of the Okanogan-Wenatchee National Forest from Stehekin to Mount Stuart.

The rescues come amid an unprecedented surge in visitors to the Okanogan-Wenatchee: campgrounds are at or near full capacity at all times and parking lot overflow stretches for miles along roadways in some cases, according to Suzanne Cable, trails and wilderness program manager with the U.S. Forest Service.

She thinks it’s related to COVID-19.

“There has definitely been an upward trend over the last several years in many locations, but the huge spike in use is definitely pandemic-related as more and more people are choosing to explore all kinds of outdoor recreation on their national forests,” Cable said in an email Thursday.

In past years, Okanogan-Wenatchee was busiest on weekends, but now weekdays are what weekends used to be and weekends are more like holidays, Cable said.

It doesn’t appear to be a coincidence that with more people on the trails there have also, at least recently, been more injuries.

“Yesterday, I would’ve swore that was a Saturday or Sunday the way calls were coming in,” said Rich Magnussen of Chelan County Emergency Management. “Really right now, it doesn’t matter what day of the week it is; we’re just seeing a lot of activity.”

Of the four people rescued, three were experienced and carrying appropriate equipment, he said.

The concern is that one day the sheriff’s office will be stretched too thin to appropriately respond to an injured climber.

Aside from search and rescues, Sisson and Magnussen are tasked with issuing evacuation notices during wildfires, which consumes most of their time during the first 24 hours of a fire.

“There’s so much that needs to get done from evacs to road blocks and tying in with the incident command,” Sisson said. “So that’s our other fear is getting another fire like we had [July 24] and then getting SARs on top of that,” Sisson said.

And then there’s helicopters.

Search and rescues often require a helicopter to fly a patient to safety or to insert a mountain rescue climber near the patient. As was the case this week, helicopters aren’t always easy to come by.

When a 23-year-old Carnation woman was injured Tuesday on Mount Stuart, the sheriff’s office used one of its helicopters to fly in a four-person rescue team. After the helicopter returned from its mission, it didn’t have enough power to fly back out to the mountain later that day to insert two more rescuers, Magnussen said.

The sheriff’s office has a second helicopter, but it’s currently out of service with mechanical problems. Instead, they used Chelan County Fire District 1’s helicopter, which is leased to the state Department of Natural Resources. That’s a lot of phone calls.

If a hoist is needed, officials often lean on helicopter crews from Naval Air Station Whidbey Island or King County.

With the weekend drawing near and fire weather in the forecast, Sisson and Magnussen are asking recreators to know their limits and use caution.

“Don’t do a new activity that you’ve never done before or with this heat, hiking isn’t necessarily the best idea right now,” Sisson said. “People really just need to stop and think before they take on some of these hikes and climbs and different activities.”

Magnussen noted that three of the four recent search and rescues weren’t attributable to inexperience.

“They’re people taking falls that, you know, those are tough to prevent and they all had the right equipment, just tragic accidents,” Magnussen said. “Numbers have increased, so we’re just going to see more of those.”

The Okanogan-Wenatchee National Forest has experienced an unprecedented rise in visitors this year. As a result, officials are seeing:

With her shoes off and trying not to get too wet, Teresa Wilder with Chelan County Elections, collects ballots in the sprinklers at Memorial Park Friday. With her is Terry Hammond also with the elections department at left. They expect the number of drop off ballots to increase in the next few days with next Tuesday the last day to vote.

Chelan County Elections staff Terry Hammond and Teresa Wilder walk back to the auditors office Friday with ballots collected from a drop box at Memorial Park.

NCW — Though they were both hoping for 60% voter turnout for the Aug. 4 primary, the Chelan and Douglas county auditors say they’ve gotten less than half of that so far.

“In order to reach 60% we will need to have a huge push with a lot of people voting this weekend and through Election Day next Tuesday,” Douglas County Auditor Thad Duvall said.

He’s still hopeful, though, as the ballot features a number of high-profile state and local races that have generated lots of interest. He believes people are waiting until closer to Election Day to vote because there are so many candidates to consider — including 36 for the governor’s race.

Duvall said turnout will most likely be much higher for the Nov. 3 general election.

Chelan County Auditor Skip Moore said he thinks the next few days will take turnout over the 50% mark.

“I was hoping it would be stronger because of everything we’re going through locally and nationally and the candidates on the ballot,” he said. “I was hoping for 60%.”

The low turnout is especially frustrating given the fact that Washington votes by drop box or mail and postage is paid, he said.

One local race on the ballot is for Chelan County Commission, where three candidates are looking to replace retiring Commissioner Doug England in District 3.

They are Brandt Cappell, a senior legislative assistant in the state House of Representatives; Dale England, Doug’s brother who owns Lake Chelan Helicopters and is an orchardist and former sheriff’s deputy; and Tiffany Gering, chief operating officer for the Lake Chelan Chamber of Commerce.

In state Legislative District 12, which covers Chelan and Douglas counties and parts of Grant and Okanogan counties, Rep. Keith Goehner, R-Dryden, faces opposition from Adrianne Moore, a Democrat from Winthrop, though with only two candidates, the race won’t be decided until the Nov. 3 general election. 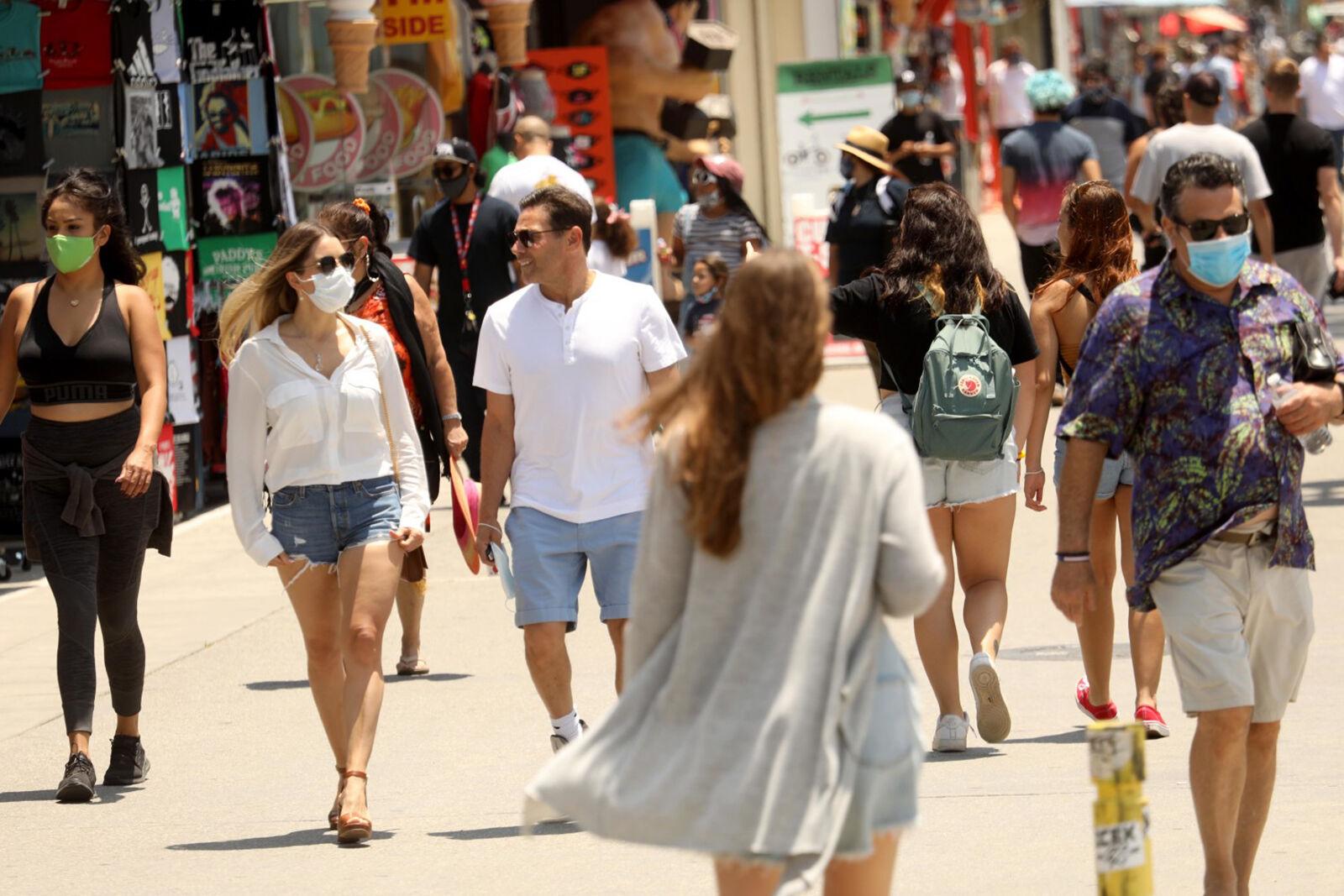 People, some with a mask, others without, walk along the Venice Boardwalk in Southern California in early July.

WASHINGTON, D.C. — U.S. House of Representatives Speaker Nancy Pelosi said talks with the White House on a coronavirus aid bill were not near a deal on Friday, as federal unemployment benefit that has been an essential lifeline for millions of Americans were set to expire.

Asked why she rejected a proposal from President Donald Trump’s administration for a one-week extension of the $600 enhanced weekly jobless payment, Pelosi told reporters that such a move would occur “if you are on a path” toward a deal.

Pelosi, the nation’s top elected Democrat, said she thought Congress and the White House eventually will come together on legislation, although she gave no timetable.

Referring to the mounting deaths from COVID-19 and rapidly rising cases, Pelosi said: “This is a freight train that is picking up steam. ... It must be stopped.”

In some of her toughest criticisms so far, she said that Republican delays on legislation and “distortions” about the pandemic “has caused death unnecessarily.”

White House officials took their own hard partisan line, accusing Democrats of refusing Trump’s proposals to extend the jobless benefit and a moratorium on evictions that expired last week.

“What we’re seeing is politics as usual from Democrats on Capitol Hill,” Meadows — a former Republican House member — told reporters.

Lawmakers and the White House are at odds over efforts to further shore up the economy and manage the novel coronavirus pandemic, which has left tens of millions of Americans out of work and killed at least 152,384 people in the United States.

In a meeting on Thursday night between top White House officials and congressional Democratic leaders, negotiations focused on an extension of the $600 per week in federal unemployment benefits, which Americans who lost jobs because of the health crisis have been receiving in addition to state jobless payments.

According to a person familiar with the closed-door negotiations, the White House proposed continuing the $600 weekly unemployment payment for one week, which Pelosi and Schumer rejected. The White House then proposed reducing the $600 weekly payment to $400 for the next four months. While that was a move toward Democrats’ demands, the source said they rejected it as insufficient.

The source, who asked not to be identified, said the White House also hinted it could embrace a deal without the legal protections from lawsuits for companies and schools that McConnell has said must be included.

On Thursday, Senate Republicans tried, without success, to pass a bill reducing the jobless benefit to $200 per week.

With 30 million people are currently collecting jobless benefits, government relief efforts now represent 7.1% of American personal income. That’s far above the previous record of 1.55% set in July 1975, according to data from the Bureau of Economic Analysis.

Democrats want a wide-ranging economic stimulus bill that would include about $1 trillion in aid to state and local governments experiencing plunging revenues during the economic downturn.

In mid-May, the Democratic-controlled House passed a $3 trillion bill that the Republican Senate has ignored.