WENATCHEE — It was a full house on Zoom Tuesday night for Chelan County’s public hearing on its draft short-term rental regulations.

More than 400 people attended the public hearing and 47 people gave testimony over a two-hour period, but the county got through less than half the people who wanted to speak.

The three-person Chelan County Commission is set to vote Dec. 29 on the draft regulations. Commissioners Bob Bugert and Kevin Overbay said they have not decided whether they would vote for the regulations as they stand.

“This has not been a rushed process, it has gone on for quite a while,” Chelan County Commissioner Doug England said. “And the only thing I can guarantee from this process is that no one will be entirely happy.”

The draft code currently would require existing short-term rentals to enter a lottery for permits in areas where they make up more than 5% of the houses and apartments in the area. The two areas of biggest concern are in Manson and Lake Wenatchee. If rental owners do not get a permit, they have to close after three years.

After the testimony, the commissioners asked Community Development Director Jim Brown to examine the following:

The requests do not mean the commissioners are deciding to go in that direction.

Of the 47 comments, 34 were from short-term rental owners who opposed the regulations. Representatives from the following organizations also spoke:

Janice Wakefield, who owns a vacation rental in Leavenworth, said she relies on the income from the place she’s rented since 2008. She lives in the Seattle area. She has sunk a lot of her income into the property and would be greatly impacted by the loss, she said.

“I now have sleepless nights trying to figure out what to do if you pass this code,” Wakefield said.

Short-term rentals are impacting the price of homes and reducing the amount of homes available to rent in the community, said Jerry Jennings of Plain. Employers in the community are struggling to find accommodations that their employees can reasonably afford, which is also hurting their ability to hire qualified staff.

The North Central Washington Association of Realtors is against the current draft code, said Adam Haynie, a spokesperson for the organization. It would cost hundreds of people’s jobs and lose millions of dollars for the county, he said.

“Prior to adopting or enacting any final code, we urge the commissioners to publicly deliberate and analyze these potential economic impacts,” Haynie said. “Especially in light of the COVID-19 pandemic that continues to threaten our local economy in the coming years.”

It is not just one or two bad actors among short-term rentals that are leading to disturbances and nuisances in neighborhoods, said George Wilson of Lake Wenatchee. Wilson purchased no trespassing signs and was giving them out to his neighbors after he was advised to do so by an attorney when tourists used his dock without his permission.

“I inquired with south shore residents if they wished to order a sign,” Wilson said. “Seventy signs were ordered and there were subsequent requests to order more of them.”

The current draft code, though, with its lottery system, amounts to a redistribution of wealth, said Don MacKenzie, Short Term Rental Alliance of Chelan County spokesperson.

“The lottery is an inherently arbitrary redistribution of wealth that will take income from those who missed out on a permit and provide a windfall to a lucky few,” MacKenzie said.

The sun sets on fog and clouds enveloping the Wenatchee Valley Monday — winter solstice — the shortest day of the year. This scenic was made from Badger Mountain Road, the lower section seen in the bottom of the photograph.

OLYMPIA — Gov. Jay Inslee on Monday announced new travel restrictions for people arriving from the United Kingdom, South Africa and other nations where a new variant of the novel coronavirus has been reported.

Early estimates indicate that the new mutation of the virus, while not more deadly or vaccine-resistant, spreads faster and more easily than prior strains. There is not yet evidence of this new strain in the United States, but Inslee said it was crucial to act early, “before the horse is out of the barn.”

Inslee’s new proclamation requires anyone arriving in Washington from those countries within the last 14 days to quarantine for 14 days. It also urges those people to get tested for the virus.

The quarantine is mandatory and legally enforceable, but the state is not likely to take many enforcement measures, Inslee said.

He compared the new restrictions to other orders he’s put in place — like the state’s mask mandate, limitations on retail capacity and a ban on indoor dining at restaurants — which have been legally binding but have come with sparse enforcement.

“We have found that when we have put legally binding requirements in the state, we have had incredible levels of compliance,” Inslee said. “The vast, vast majority of Washingtonians are pitching in, they are masking up, businesses are following these difficult restrictions.”

Also Monday, Inslee, in response to a ruling from the U.S. Supreme Court, changed the 200-person cap on religious services from a binding order to a recommendation.

More than 40 countries have banned travelers from the United Kingdom over the last several days. Inslee said the state does not have the authority to ban flights from the U.K.

In southern England, the United Kingdom has moved to its strictest level of coronavirus restrictions, ordering all nonessential businesses to close and ordering families to nix planned Christmas gatherings.

Inslee stressed that the travel restrictions were precautionary. But even if the new strain is not more severe, higher transmissibility means it could lead to a surge in infections and place more stress on hospitals and intensive care units.

Three flights per week arrive at Seattle-Tacoma International Airport from the U.K., said Perry Cooper, an airport spokesperson. That number used to be higher, but two airlines canceled their flights last spring due to the pandemic.

A London-to-Seattle flight scheduled to land Monday was canceled, Cooper said, but the reason for the cancellation wasn’t clear. Flights are frequently canceled if not enough tickets are sold, Cooper said.

Trevor Bedford, an infectious-disease researcher at the Fred Hutchinson Cancer Research Center, said London has seen a rapid increase in recent weeks in this strain of the virus and estimates place it at perhaps 70% more transmissible.

But, he said, researchers don’t yet know why it may be more transmissible.

“It seems very likely to me, but not certain — not at all certain — that it is more transmissible, but we don’t know the mechanism for that,” Bedford said. “It could be milder and have more asymptomatic transmission. There’s a lot of ways you could accomplish this.”

He said that researchers in the U.S. have sequenced the genome of 1,150 coronavirus infections in the U.S. since Nov. 1. Most of them are slightly different from one another.

“The virus is mutating all the time and most of the mutations don’t do much,” Bedford said. “None of them have been this new strain of the virus.” 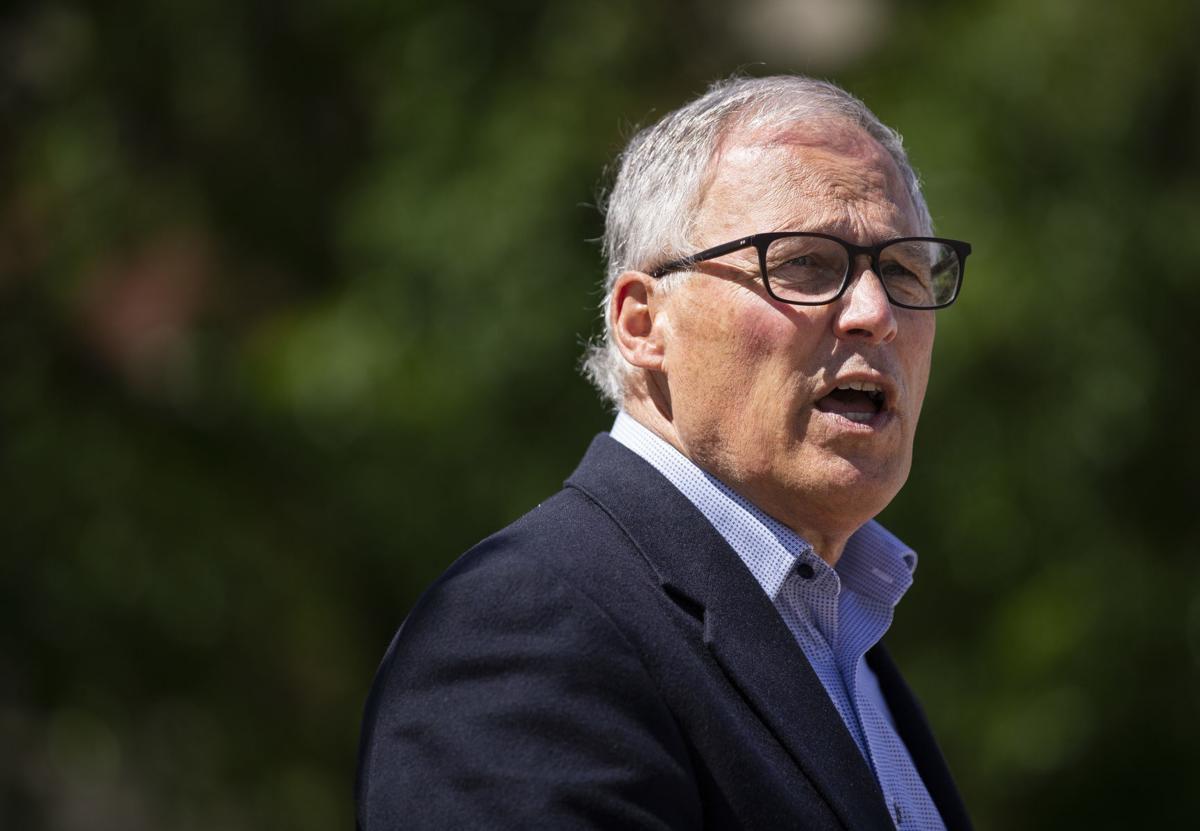 In a surprise video announce- ment posted on his Twitter account, Trump called the bill a “disgrace” and said it was full of “wasteful and unnecessary” items. He demanded that lawmakers increase the stimulus checks due to go out to most Americans from the “ridiculously low” amount of $600 to $2,000 — or $4,000 for a couple.

The attack on Monday’s legislation, which included $900 billion in relief along with $1.4 trillion in government funding through next September, marked a sudden change after the administration had endorsed frantic negotiations among congressional leaders to get a deal after months of stalemate.

If the president doesn’t sign the legislation by Dec. 28, government funding would lapse after midnight that day.

Trump on Tuesday night didn’t specify whether he would veto the measure. The White House did not immediately respond to a request for comment.

House Speaker Nancy Pelosi responded to Trump’s video message by saying she welcomed his call for $2,000 checks for most Americans.

“Republicans repeatedly refused to say what amount the President wanted for direct checks. At last, the President has agreed to $2,000 — Democrats are ready to bring this to the Floor this week by unanimous consent. Let’s do it!” she tweeted.

The House adjourned after approving the bill, with a Dec. 28 return date. The Senate is next scheduled to convene for regular business on Dec. 29.

If Trump vetoes or declines to sign the measure, it would suspend benefits from the previous COVID relief bill that expire at the end of the month, including a moratorium on evictions and extended unemployment insurance — all of which were addressed in the giant package approved Monday night.

Trump said the stimulus bill had “taken forever” to come together and blamed Democrats of having “cruelly blocked” aid to improve their chances of winning the 2020 election.

Soon after his tweet, one of his close allies in Congress, Republican Sen. Lindsey Graham of South Carolina, renewed his support of the measure.

“The #COVID19 package, while imperfect, will save jobs and lives. The sooner the bill becomes law — the better,” Graham tweeted.

Trump’s rant about the package came after he took a mostly hands-off approach to negotiations with Congress for months. He declined to engage directly with Pelosi, nor did he convene bipartisan congressional leaders in White House meetings to get a deal.

Still, Trump had indicated privately during the negotiations that he was unhappy with some of the provisions. The president had been working on a statement calling for $2,000 stimulus checks, but White House chief of staff Mark Meadows raised objections to releasing it amid the fragile talks, according to a person familiar with the matter.

Trump also sent conflicting signals about how big a package he wanted. He at one point pulled his team from talks with Democrats, then demanded a bigger bill than Pelosi herself had favored.

With regard to direct payments, a member of his own party, Sen. Ron Johnson of Wisconsin, personally blocked bipartisan attempts to approve $1,200 checks instead of the $600 that ended up in the bill — citing concerns about the fiscal deficit.

Senior Senate GOP members in recent days touted that they kept the relief effort below $1 trillion, instead of the $2 trillion and more sought by Democrats, only now to be undercut but a lame-duck president after the fact.

“It really is a disgrace,” Trump said of the bill passed Monday, saying that not enough money was given for small businesses, especially restaurants, while money went to aid other countries including Cambodia and Egypt.

Foreign aid was included as part of the omnibus package of regular spending bills, however, and generally is enacted every year.

In addition to the $600 checks, the relief package includes hundreds of billions of dollars for small businesses and supplemental unemployment benefits for those who lost their job during the pandemic. It also includes money for schools, airlines and to distribute vaccines.