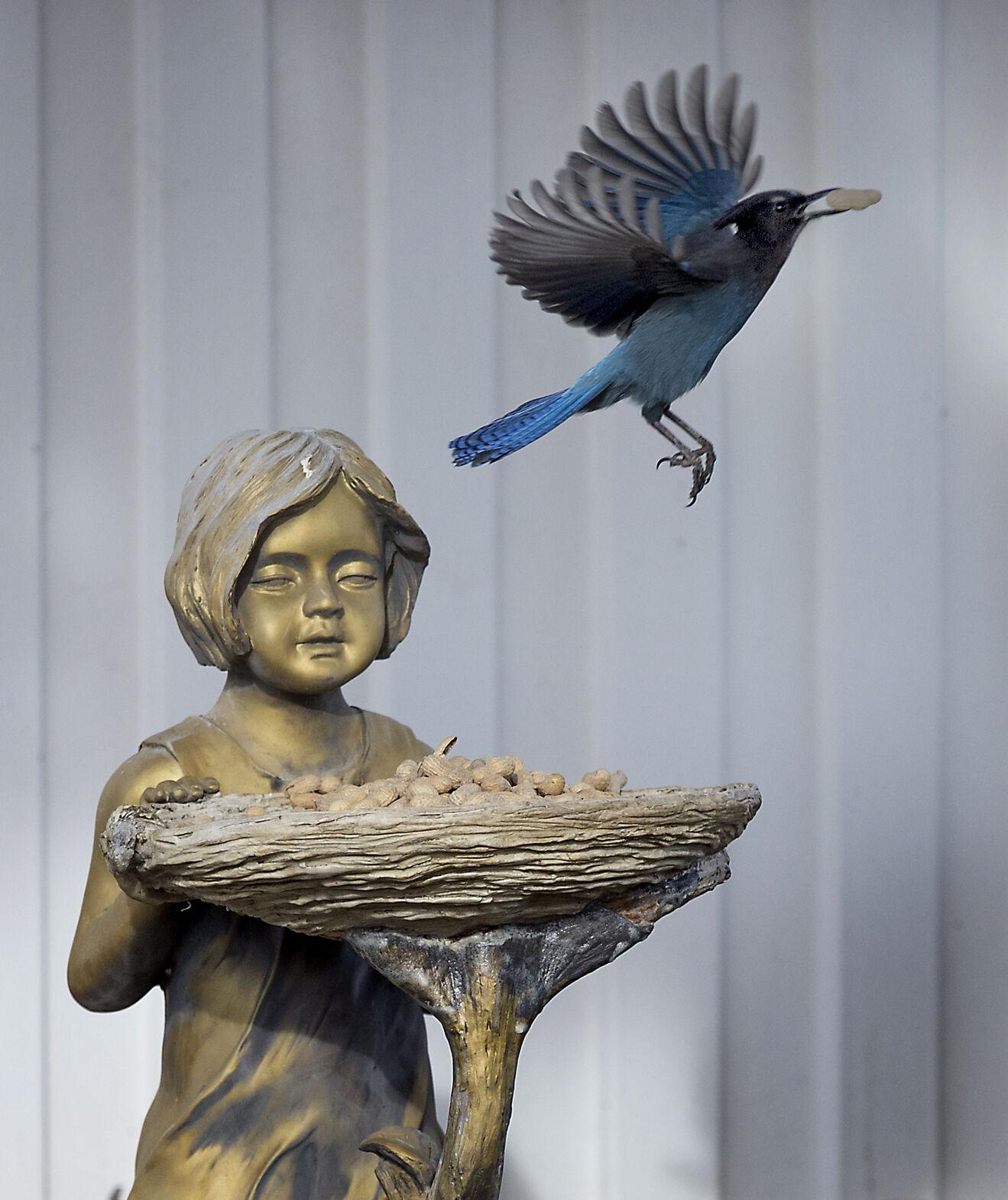 A Steller's jay flies up to an evergreen tree with a peanut from a Cashmere bird feeder on Thursday.

OLYMPIA — Grocery store employees, agriculture workers, firefighters, public transit workers and law enforcement officers are among those in the next round of COVID-19 vaccine eligibility, Gov. Jay Inslee announced Thursday.

The latest vaccination eligibility comes shortly after Inslee said teachers could get immunized, a statement that followed President Joe Biden’s directive to prioritize educators for shots as he announced there would be enough supply for all American adults to get vaccinated by the end of May.

In an updated distribution timeline, the state is expecting to move into the next phase of vaccination eligibility by March 22, assuming vaccine supply continues to increase. The next three phases, spread out through the end of April, will include critical workers, people with comorbidities that put them at risk from COVID and people living in congregate settings.

Moving forward will still depend on progress in early groups, Inslee told reporters, adding he is “thrilled” with the progress the federal government’s been making.

“I have high confidence that these supplies will continue to increase,” he said.

The critical workers phase includes those in agriculture, food processing, grocery stores, public transit, firefighters law enforcement, corrections, prisons, jails and detention centers. It will also include people over the age of 16 who are pregnant or have a disability putting them at high risk, though it wasn’t immediately clear which disabilities.

The phases in mid-April include those with two or more underlying medical conditions that put them at higher risk for COVID-19, including heart disease, cancer or diabetes. Those in congregate settings include people in correctional facilities or group homes for people with disabilities, and people experiencing homelessness who live in or access services in congregate settings.

These groups will join health care and frontline workers, residents 65 and older or 50 and older in a multigenerational household, as well as teachers and child care workers, who became eligible Tuesday.

The dates are based on federal allocation projections, Inslee said. While those numbers have been unsteady in the past, he said he is confident the supply chain will remain as estimated.

The new eligibility guidelines will depend largely on vaccine supply.

Currently, only half of Washington residents 65 and older have received one dose of a COVID-19 vaccine. That leaves more than 600,000 eligible residents in the current tier. The added group of teachers and childcare workers is estimated to be 260,000 residents, according to state health officials.

The state is currently receiving about 300,000 total doses per week of Moderna and Pfizer vaccines, which are two-dose vaccines. By the end of March, state officials expect to receive 330,000 doses per week. Those will not be enough to vaccinate all currently eligible residents, which means the Johnson & Johnson doses and federal vaccine programs will be relied on to distribute doses in the coming weeks.

Washington has been allocated just 60,900 Johnson & Johnson doses for the next several weeks and will not receive more until the end of the month, due to federal supply constraints.

“We will not receive additional doses of the Johnson & Johnson vaccine for the next three weeks,” Lacy Fehrenbach, deputy health secretary, told reporters on Thursday, noting that additional allocations will likely begin at the end of March.

State health officials are still discussing how best to use the single-dose shots going forward.

As more people become eligible, Secretary of Health Dr. Umair Shah encouraged providers to continue ensuring appointments are available to seniors, who are the most at-risk for hospitalization or death due to the virus.

Anyone who is currently eligible should still sign up to get an appointment, he said.

“As we’re advancing, we are not leaving anyone behind,” he said. “If you’re already eligible for the vaccine, you remain eligible.” 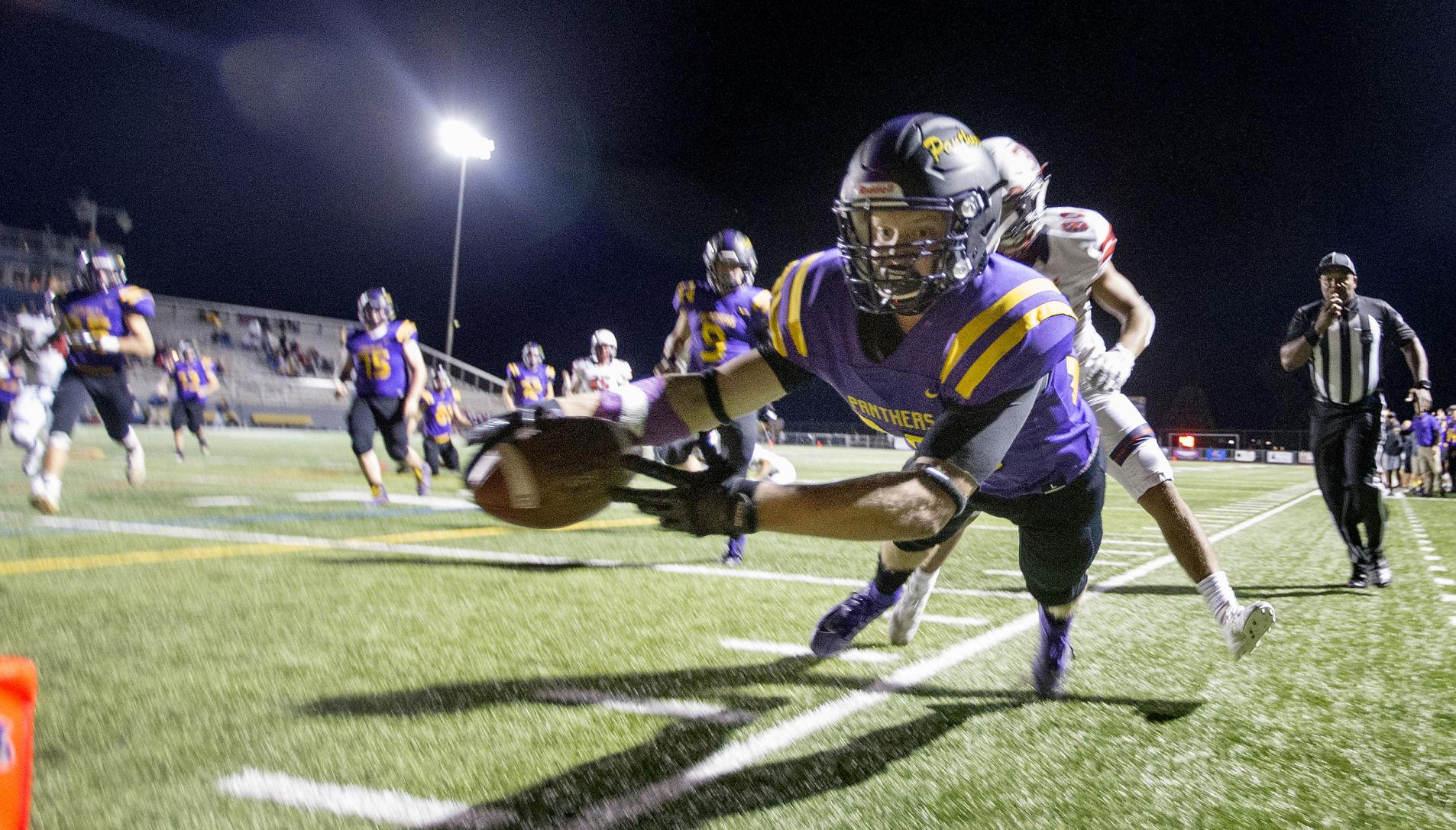 Wenatchee High School's Nathan Blauman reaches for the end zone but gets knocked out of bounds before reaching it in the third quarter of his team's football game against Eisenhower Thursday night, Sept. 26, 2019 in the Apple Bowl. He scored soon after to make the score 34-21. Blauman had six touchdowns and a school record 325 yards on the night.

WENATCHEE — Health clinics, farmworker advocacy groups, and agricultural employers in North Central Washington are excited to see COVID-19 vaccines finally making it to farmworkers at the end of March.

Gov. Jay Inslee announced the next three groups in his vaccine rollout plan at a press conference on Thursday. The first group will include essential workers that work or live in enclosed spaces with a lot of people and cannot stay apart. The tentative start date for this group is March 22.

The announcement comes as an encouraging sign for Jon DeVaney, president of the Washington State Tree Fruit Association, which represents fruit growers and packers across the state.

“A lot of employers have been asking when they’ll be able to get vaccines for their employees,” he said. “And so knowing that there’s a target date lets people start planning.” He said the date “early enough in the year that we should be able to get a substantial number of workers vaccinated before we get into peak harvest season.”

But a significant number of farmworkers in Washington state come from foreign countries, like Mexico, as H-2A workers. Whether they qualify for the vaccine under the governor’s plan is a question many are asking.

DeVaney said he had not seen the specific guidelines around H-2A workers, but they were encouraging the state to make it available to anyone present in agricultural work.

“The vaccine is not a benefit that should be rationed out based on immigration status,” he said. “It should be around making sure that in conditions where the virus is most likely to spread we’re taking medical precautions to limit the spread and the potential harm.”

But since H-2A workers are agricultural workers that live in congregate settings, they would also qualify for the most part, according to Manuel Navarro, chief operating officer at Columbia Valley Community Health.

CVCH had already been preparing to roll out vaccines for the upcoming season when the governor made his announcement, and now are ready to go when they can, Navarro said.

Every year, CVCH’s mobile teams perform primary care for agricultural workers directly where they live or work, according to Navarro.

The logistical challenge is different from establishing one mass vaccination site at the Town Toyota Center and then having everyone line up in their cars, Navarro said. Farmworkers are hard to reach.

But with established connections to the large agricultural companies in the area — Stemilt, McDougall & Sons, Blue Bird and others — CVCH is prepared to go wherever the farmworkers are.

“We will be using as many resources as possible, including our Connect mobile clinic, to make sure that these patients receive vaccinations as quickly as possible,” CVCH CEO David Olson said in an email.

“It didn’t catch anyone by surprise,” Navarro said.

“It is imperative that our most critical workers living in congregate housing have early and easy access to the vaccine,” Canning said. “This next phase continues with those values, and we are excited there will soon be a pathway for this next group to get vaccinated as soon as possible.”

Stemilt Growers is also excited by the governor’s decision, according to Brianna Shales, a Stemilt spokesperson.

“Stemilt is encouraged by the expanded vaccine priority coming soon for our essential team members here in central Washington,” Shales said in an email. “We will continue to work closely with the health district on ensuring vaccine availability is communicated to our employees at the right time.”

But the state Department of Health’s inconsistent enforcement of rules and the lack of protective personal equipment during last year’s harvest season has them a bit skeptical, Franks said.

“We want to help, but we also want to make sure that [the state Department of Health] holds their end of the bargain to protect farmworker lives,” Franks said. 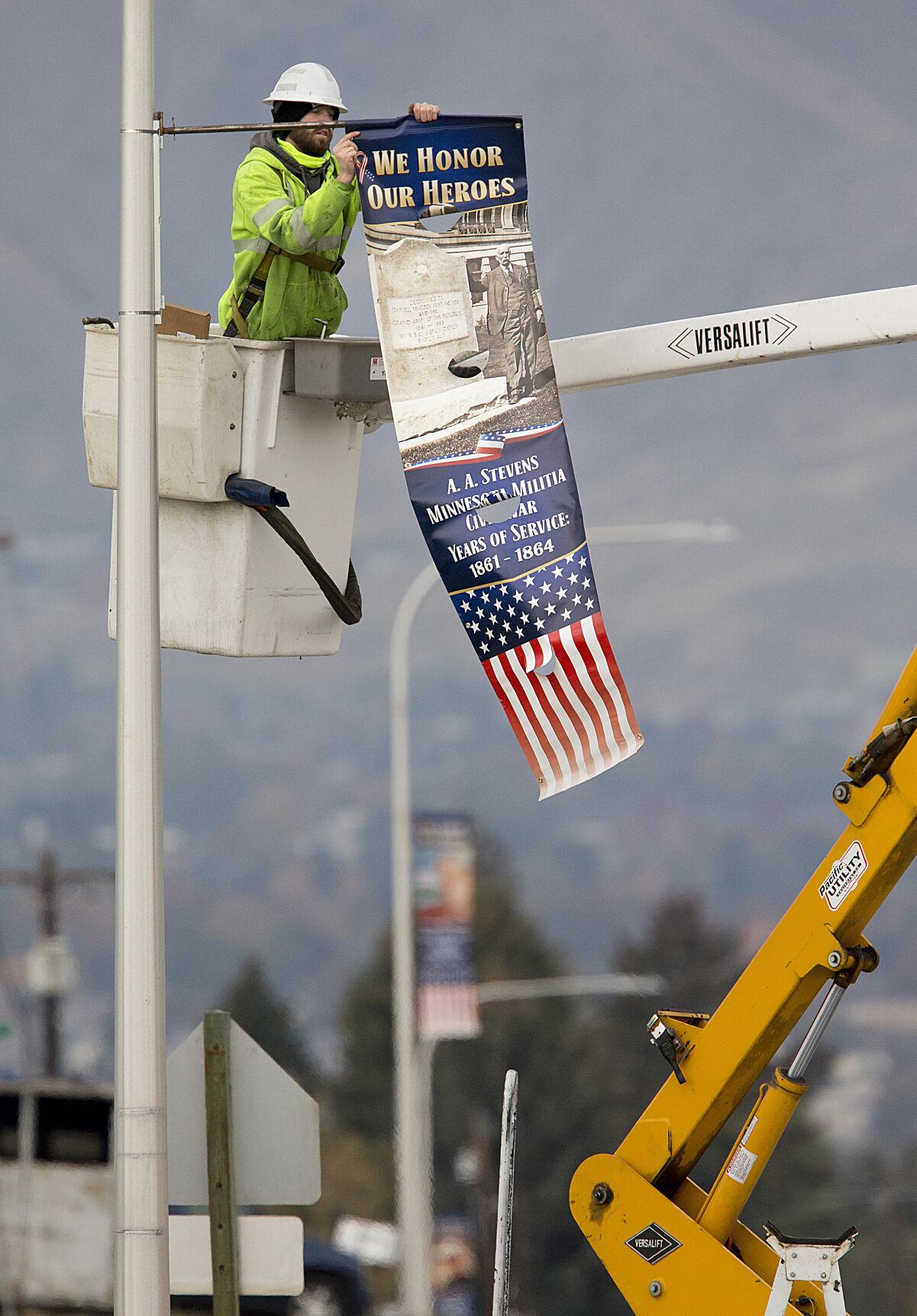 Jordan Conley of the East Wenatchee Street Department hangs a Hero Banner honoring a veteran on Northeast 8th Street on Nov. 2, 2020. The banners, 65 in Wenatchee and 36 in East Wenatchee, are purchased with donations through the Wenatchee Downtown Association and Vets Serving Vets. 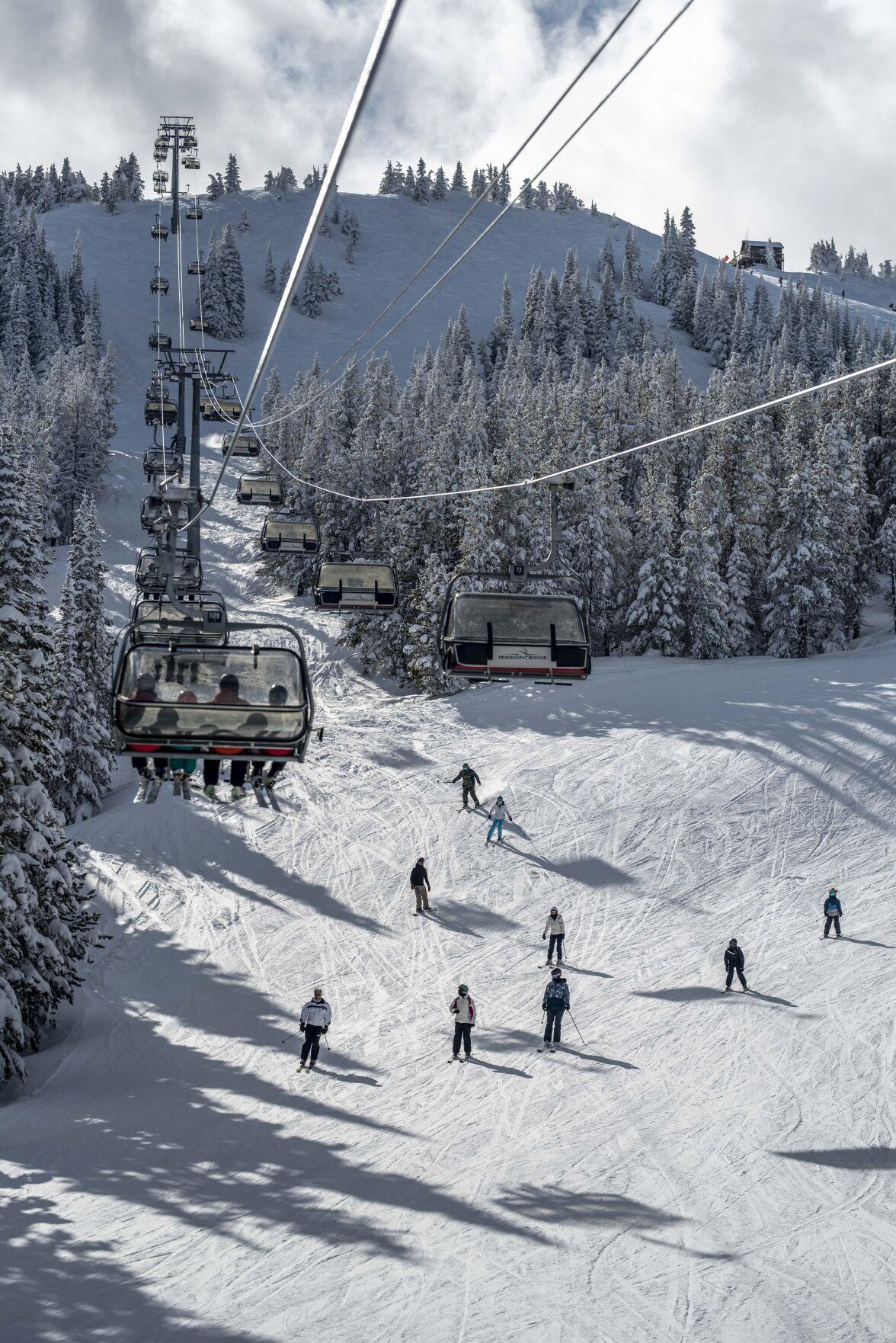 WENATCHEE — The Chelan County PUD is studying how power cuts have been used in California and Oregon to reduce the risk of wildfire as it develops its own proposed plan.

“The risks to our communities and the risk to our utility have grown so catastrophically that we need to do our due diligence in exploring this option,” PUD spokeswoman Rachel Hansen told commissioners this week.

The PUD has not adopted a targeted power-cut policy and the Fire Outage Management Plan is in its infancy. Commissioners told PUD staff to develop the plan over the next few months and then present their findings for consideration.

Staffers say early plans are for the cutoffs to be targeted and not broad, sweeping outages. The upper valley — including Plain, Lake Wenatchee and the Chumstick — are considered to have the highest fire danger in the county.

Extreme fire conditions — high winds and dry fuels — would be the most important factors in deciding when to cut power, Hansen said. But exactly how strong the winds and how dry the fuels would have to be before taking that action has not determined.

The idea to develop the plan began after the Labor Day fires that devastated neighboring Douglas and Okanogan counties and sparked a spot fire in Chelan.

Of primary concern for the PUD is that powerlines, if left energized, could ignite wildfires, either through high winds or an already active fire.

California utility PG&E filed for bankruptcy after one of its power lines caused the 2018 Camp Fire, which killed at least 85 people and destroyed almost 19,000 buildings.

Implementing preventative outages dates back to at least 2007 in San Diego, Hansen said. Last year in Oregon, where fires ravaged much of the state, Portland General Electric cut power to 700,000 customers.

This created a public information debacle — its website and call centers weren’t prepared for the influx of queries — but the move potentially stopped more new fires. A survey of its power lines found 140 separate instances of damaged equipment that if left energized could’ve created new spot fires, Hansen said.

It’s also not clear yet how long the outages would last, but Hansen said inspecting power lines after high winds could take longer than the actual weather event. The concern is that vegetation could be blown onto de-energized power lines that could then catch fire once power is turned on.

The tentative plan is for staffers to bring their findings to the commission in June, Hansen said.

PUD staff will first speak with emergency response agencies, like the Chelan County Sheriff’s Office and fire districts, and then with communities in high risk areas.