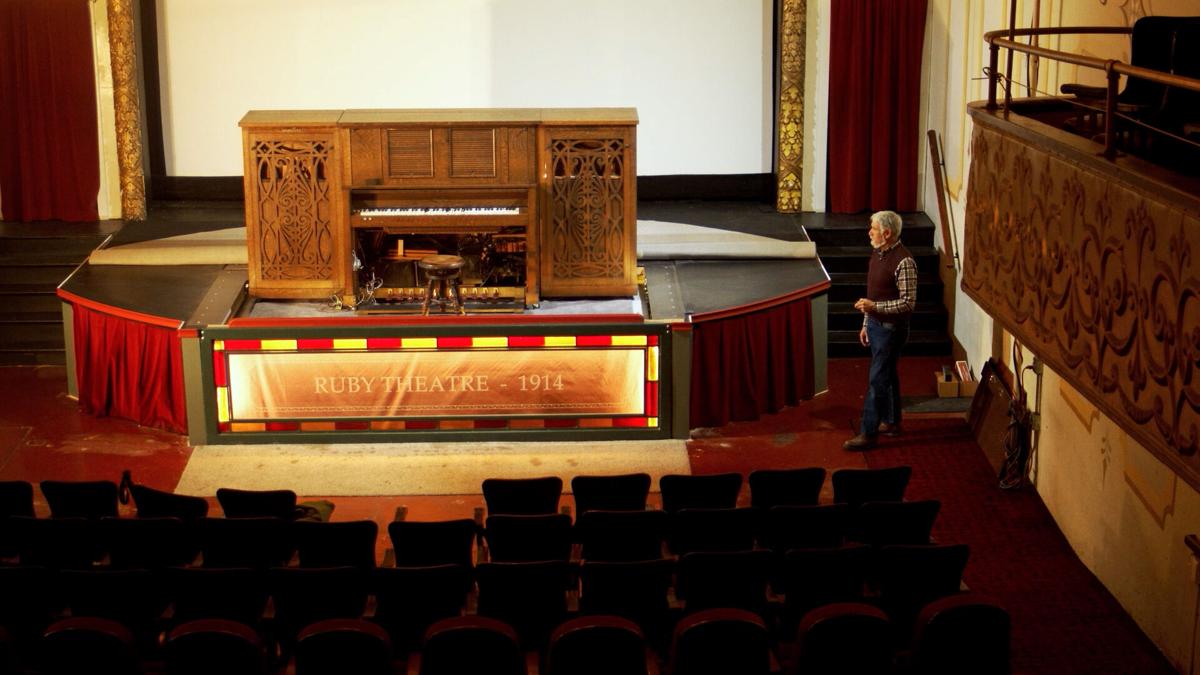 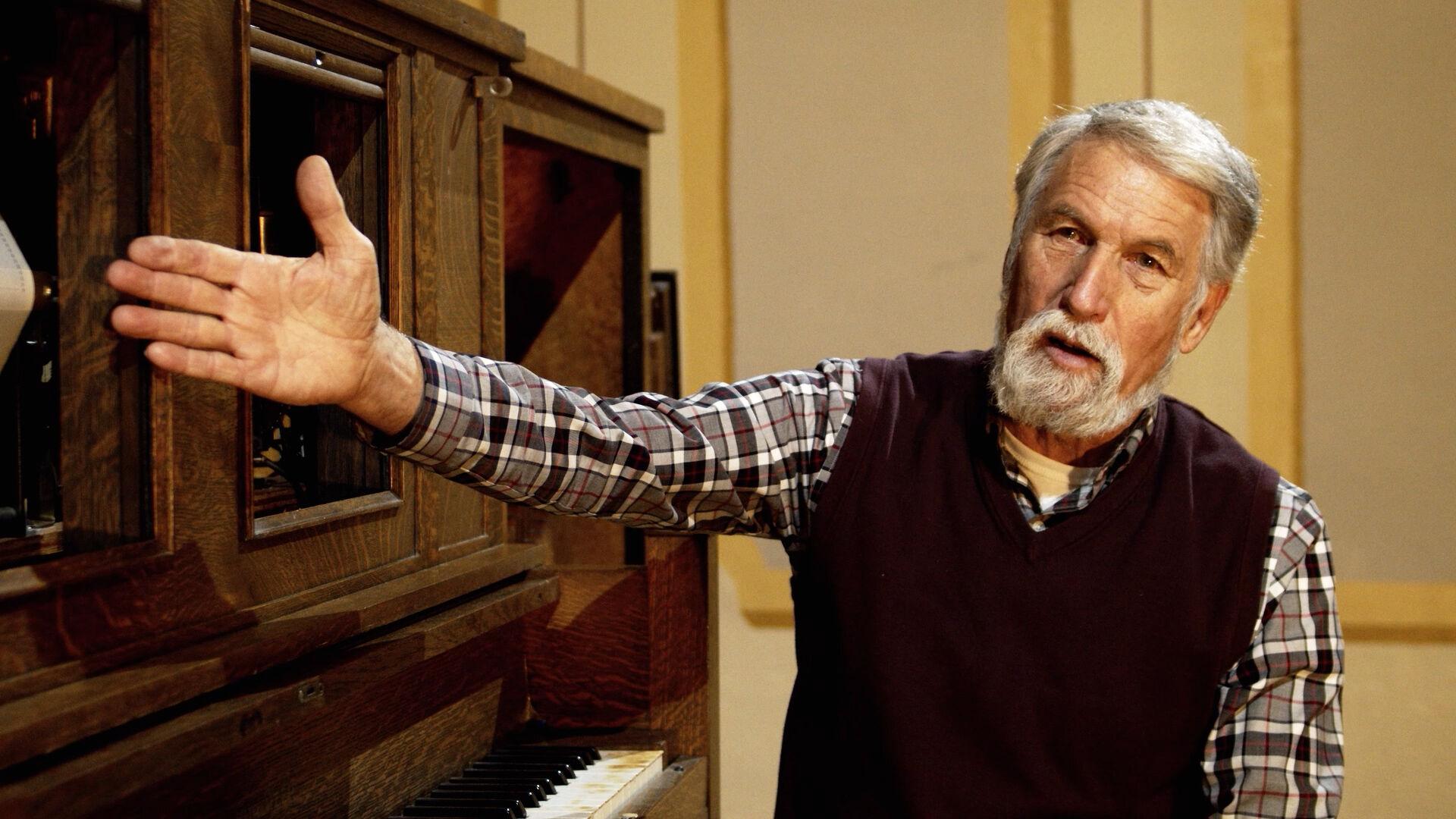 Hibbard explains the various instruments his photoplayer has connected to it. Bells, whistles and drums are all a part of the machine. 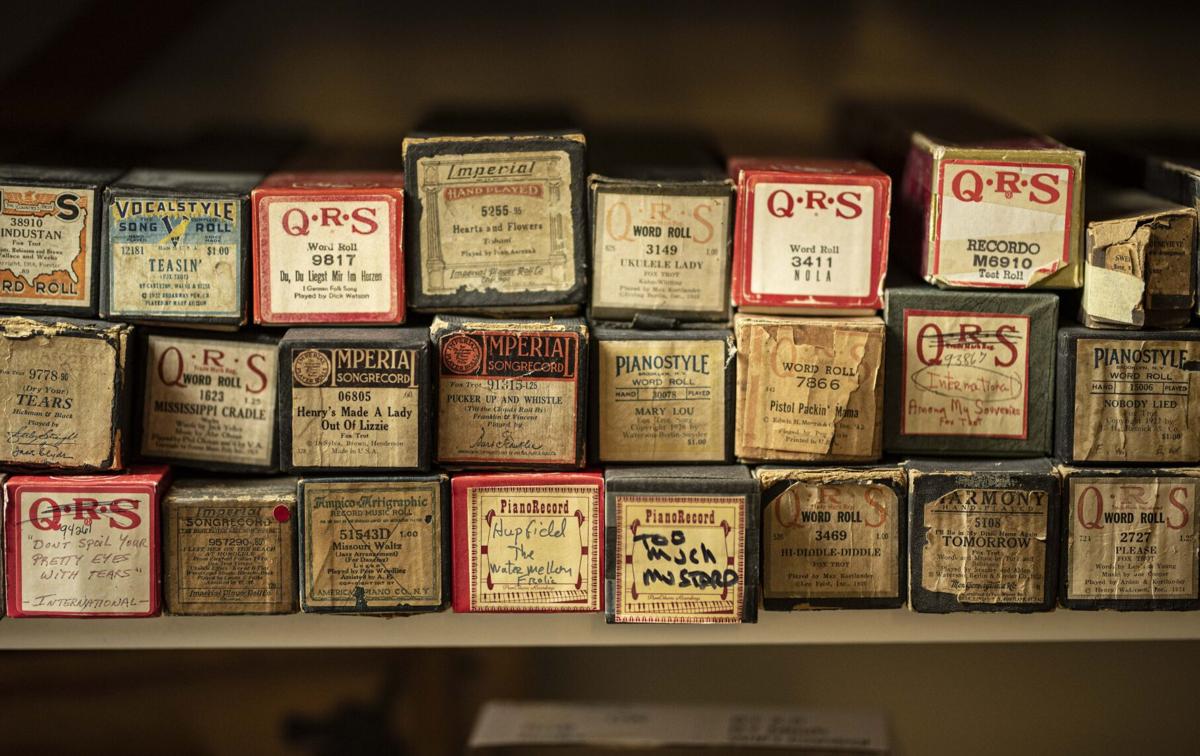 A collection of old player rolls are stored under the Ruby Theatre. Each roll is a song that can be played on a photoplayer. 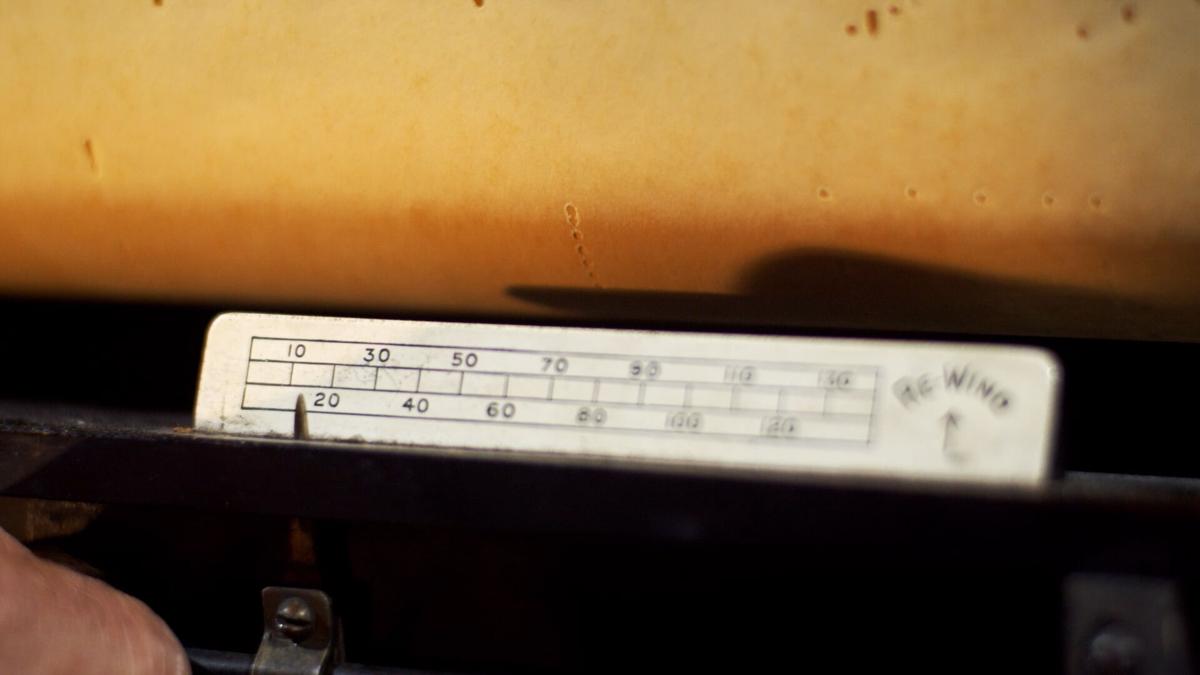 Hibbard selects the tempo of a song as the photoplayer begins to start. 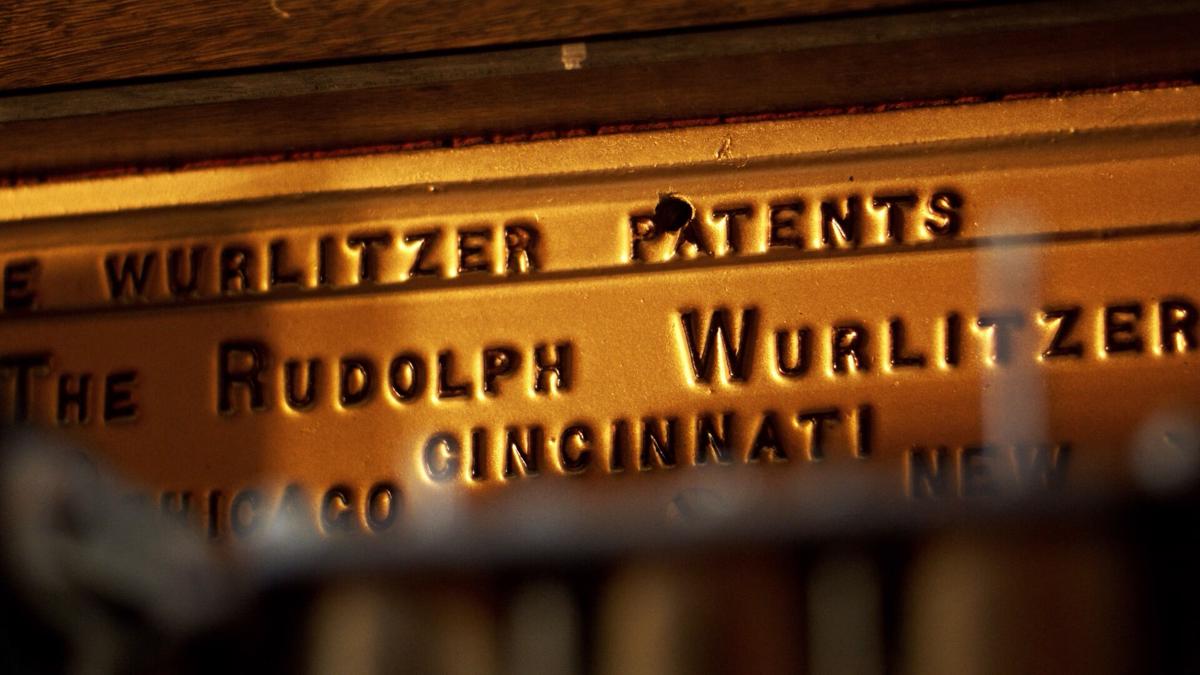 The photoplayer got its name, Valentina, because Hibbard decided naming the player after its manufacturer “Wurlizter” just did not have enough character. 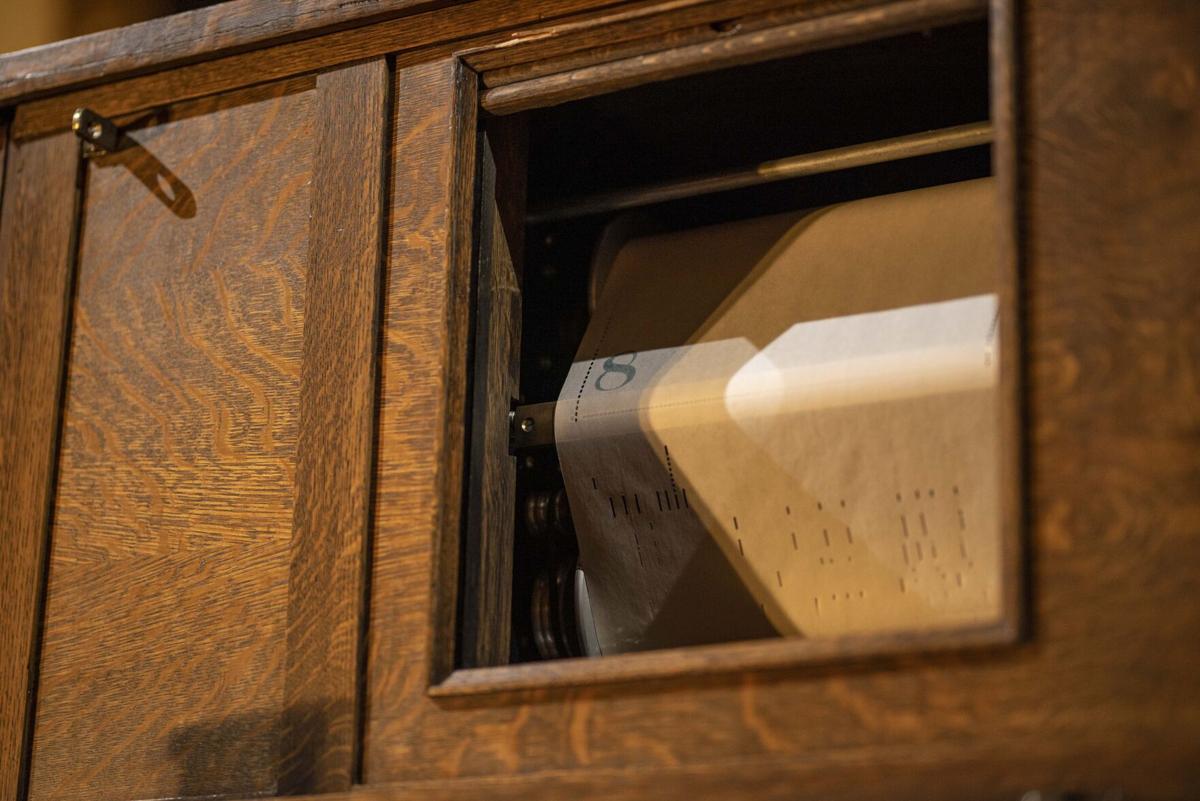 A roll of music is played on the restored photoplayer.

Hibbard explains the various instruments his photoplayer has connected to it. Bells, whistles and drums are all a part of the machine.

A collection of old player rolls are stored under the Ruby Theatre. Each roll is a song that can be played on a photoplayer.

Hibbard selects the tempo of a song as the photoplayer begins to start.

The photoplayer got its name, Valentina, because Hibbard decided naming the player after its manufacturer “Wurlizter” just did not have enough character.

A roll of music is played on the restored photoplayer.

Larry Hibbard doesn’t spend as much time with his wife as he used to; someone a little older has been keeping him out late — her name is Valentina, a 100-year-old self-playing instrument.

“She’s definitely a prima donna; she takes a lot of attention,” said Hibbard while sitting in an empty theater. Hibbard, the owner of Ruby Theatre in Chelan, has been restoring an antique music device known as a photoplayer.

Valentina spends most of her time hidden behind long, red curtains, graced by rows of empty seats inside of the Ruby. It’s a fitting aesthetic for the decades-old music machine, which grew up playing music to silent films.

“Now I have a big excuse when I come home, if I’m late.,” he said. “I tell my wife, ‘I’ve been with Valentina this afternoon.’”

Valentina is a multi-talented electric and pneumatic instrument with organ characters in her gene pool. She is quite a bit bigger than the average household piano and includes a drum set, bells, bellows, a bird whistle, pipes and several foot pedals all built-in. One of her most unique features is the ability to play music on her own using special rolls of paper.

She has two slots for rolls to be installed. The way rolls are played on Valentina is similar to DJing. One half of her can play an action song while the other side is prepped for a different mood and tempo. Both rolls can also be used together, creating a combination, he said.

The story of the player piano parallels the story of early movies and sound, he said. It is estimated that there are less than three dozen operating photoplayers in the world.

Hibbard learned about photoplayers because the Ruby Theatre bought one back in 1920. That was the heyday of photoplayers, he said.

Movies were silent films in 1914, when the theater was built, he said. Those films would be accompanied by live music. This way of viewing movies lasted until the 1920s, when “talkies” — dialog synchronized to a film — started to take over. The photoplayer eventually disappeared, “never to be heard of again” after the arrival of talkies, he said.

It is “one of those stories where you think ‘Well, that’s the end of that.’” That is, until Hibbard got a call asking if he would provide a home to a lost photoplayer in Wenatchee. “I said ‘Well, sure.’”

One bent tailgate later, after hauling the machine back, Hibbard had his first beast of a piano. A device which was, to Hibbard’s misfortune, too broken to play.

Hibbard was trying to rehome the broken instrument a second time when he received an offer for another photoplayer. But this time, it wasn’t just any player piano, it was Valentina.

Right now, it’s a passion project, he said. If others want to share in hearing this instrument, then great. It will probably be giving some concerts in the future.

The plan for what to do with Valentina has not been fully determined yet, he said. Hibbard is going to wait until theaters in Washington can open up again before making any big decisions.

Valentina is bringing back a bit of history to Ruby, he said. This theater is one of the oldest continuous movie theaters in the country, and this may be the only one operating in a theater.

Most of Valentina’s parts were in working order when Hibbard purchased her, but between moving and storing the instrument, complications arose.

Inside of Valentina, there are miles of tubes and things fall apart very easily, he said. “When I attempt to fix something, usually I break two things in the process before I get that one thing fixed.”

The player has been “cobbled up” a little bit and restored over time, he said.

“Photoplayers, just by the way they are, [are] high maintenance,” Hibbard said.

The fact that she is 100 years old means hours of trial-and-error repair work.

“A lot of it is just searching, trying, working,” he said.

The machine turns on electrically, but must be turned off pneumatically, using its compressed air, in order to turn back on again, he said. “If you don’t turn it off right, you can’t turn it on … it goes up and downhill from there,” he added.

But Valentina is a lot of fun too, according to Hibbard. “I enjoy coming out and just listening to it and I’ll be glad when other people can do that [too],” he said.

Get crafty with DIY earrings

Cashmere museum prepares for changing of the guard

Zoom talk: Learn about Ice Age floods in the PNW