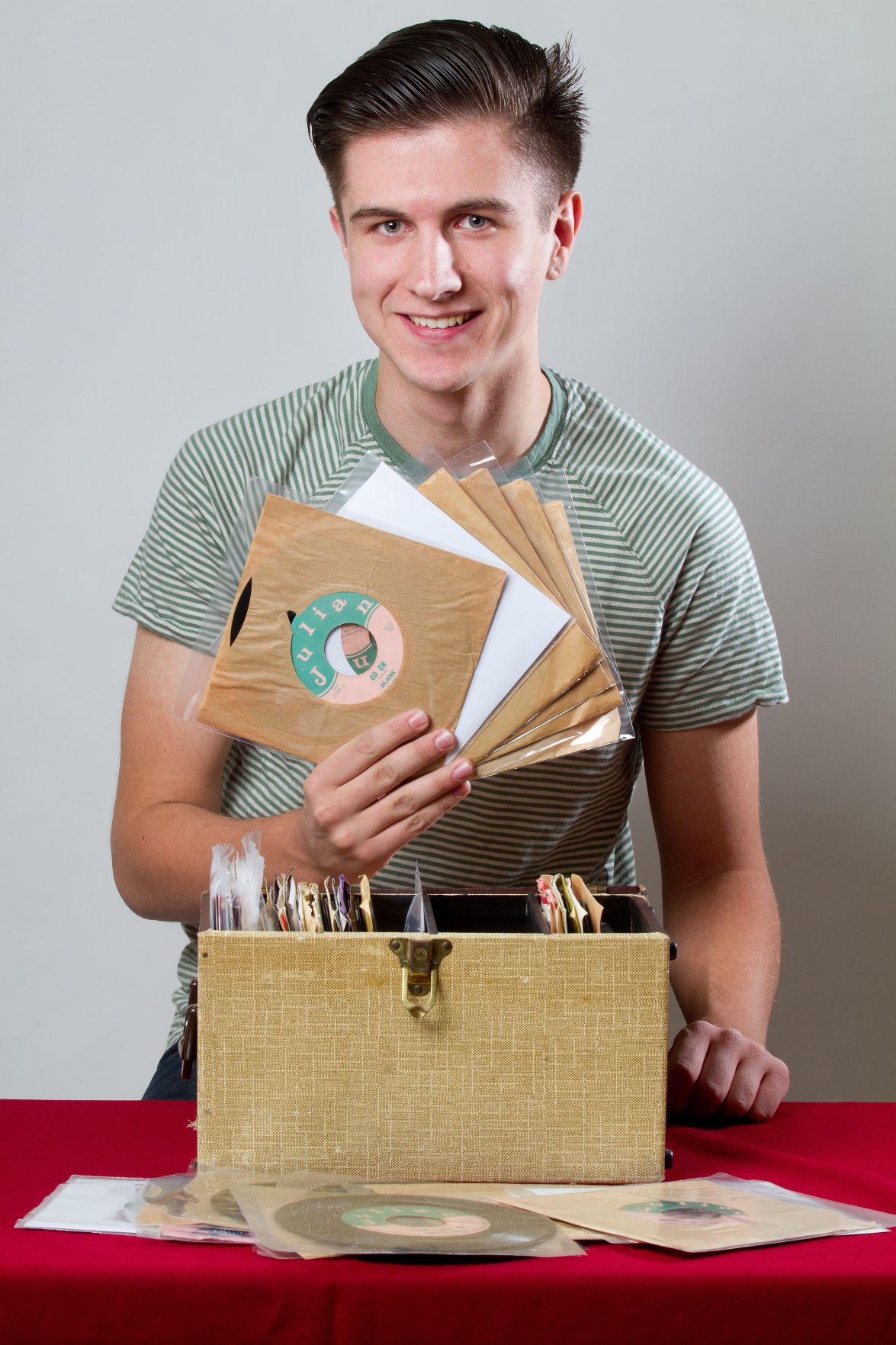 Dustin Hays and his collection of Wenatchee-produced Julian Records. 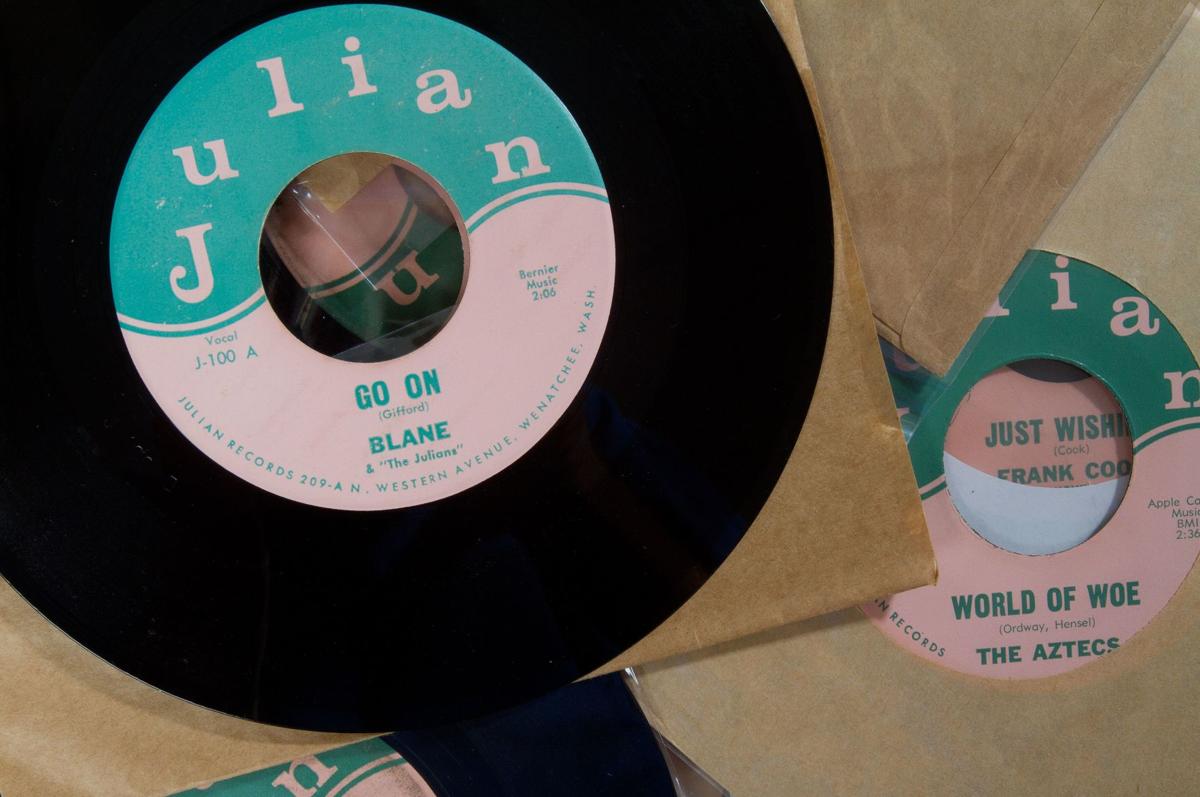 Dustin Hays and his collection of Wenatchee-produced Julian Records. This record he says, is the first one produced by the company. At top, a closer look at the original 45 by Julian Records’ first signed artist, Robert Blane Gifford.

Dustin Hays and his collection of Wenatchee-produced Julian Records.

Dustin Hays and his collection of Wenatchee-produced Julian Records. This record he says, is the first one produced by the company. At top, a closer look at the original 45 by Julian Records’ first signed artist, Robert Blane Gifford.

EAST WENATCHEE — Dustin Hays will never forget the day his father revealed a vinyl treasure trove long forgotten in the garage. He flipped through the 7-inch records and stopped at a bright green label with pink lettering — Julian.

“He’d pull one out of the stacks and tell me where he was when he bought it,” Hays said. He was 16 at the time. “He could pull any song and sing it. It was just cool getting exposed to all the music, a plethora of music that I’d never heard.”

His dad, Jeff Hays, was a storyteller with a specialty in Wenatchee history. When Dustin showed an interest in collecting records five years ago, Jeff pulled a dusty old box from the shelf and told him about Julian Records, Wenatchee-based label started by radio disc jockey Don Julian Bernier in 1960.

At the height of Beatlemania, Bernier pressed dozens of records for local garage bands, including The Chargers, Aztecs and Billy & the Kids. The musicians, mostly middle- and high school-aged kids, played dances and clubs throughout North Central Washington. The last record, by Frank Cook & the Nightraiders, was released around 1968.

“To him, these are just kids he went to school with, but to me, it’s amazing,” Hays said. “I couldn’t believe 13-year-olds could press a record in Wenatchee. It’s so special, and no one knows about it.”

Hays’ dad gave him the few Julian records he had. Since then, Hays has been on a mission to find the rest of the catalog and donate copies to the Wenatchee Valley Museum and the Experience Music Project’s Northwest music library.

“I feel obligated to do it because no one else will,” the 20-year-old said. “To me, it seems like a pretty important piece of history.”

Julians are extremely rare. The record label signed 11 bands and was only active 10 years. The 45s sell quickly on eBay and record collector websites, sometimes for more than $300. Hays won four bidding wars over Julians and spent about $600, he said. Most of his discoveries have come from the artists themselves.

What Hays really wants are the master records, which would allow him to revive the label and issue re-releases and compilations. Bernier sold the masters to a collector in Michigan in the mid-’90s. Hays tracked him down, but so far, his offers have been rejected.

“It’s frustrating; I’ve asked him a few times,” Hays said. “I know I don’t have the money, but I could do good things with them. He won’t name a price but I hope someday to throw a few thousand dollars at him.”

Hays is also trying to collect the stories behind the records, while he still can. Some of the musicians, including Bernier himself, have passed away.

“Eventually I found everyone; it took up a lot of my time at first,” he said. “Some of them were really hard to find. It was like a genealogical search. I called eight false Robert Giffords before I finally found him.”

Gifford’s daughter, Laurie Pulver-Gifford, said her dad — the first artist signed to Julian — was thrilled to retell his stories.

“I wish he could have gotten some recognition back then, but it’s never too late,” she said. “It takes a lot of love what Dustin’s doing. He’s bringing back to life some of my dad’s music. It’s pretty special.”

Cary Ordway of the Aztecs said he was surprised when he received an email from Hays about his old record label. Ordway lives in California and recently signed a record re-release deal for the Aztecs on Sundazed Records.

“It’s flattering when someone is interested in something that happened 40 years ago,” Ordway said. “It’s like someone asking about that winning touchdown. It’s fun and it’s flattering.”

Hays said one of his most rewarding moments was watching the Chargers, now in their 60s, reunite last spring at the Clearwater Steakhouse in East Wenatchee.

“There are moments that musicians have when they look at each other and know it sounds great,” Hays said. “It was crazy to see them giving each other that look after 44 years of never playing together. As a musician and someone who loves the music, it was unbelievable.”