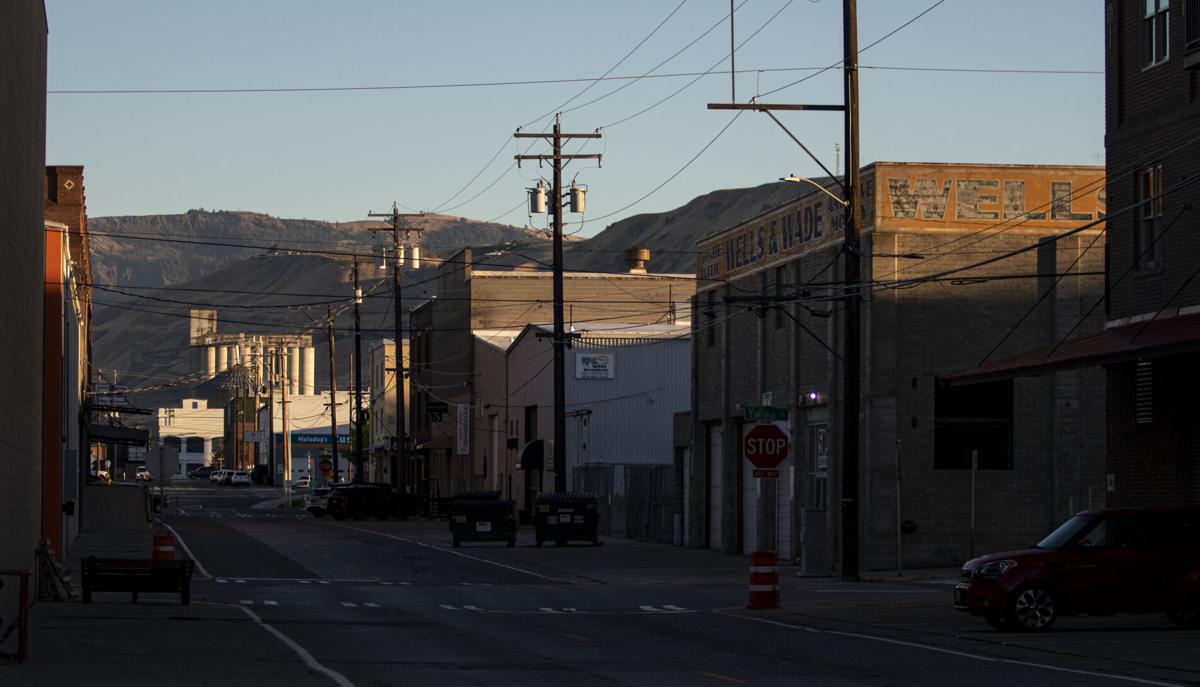 The Wells & Morris Hardware Co. building sits tucked away at the corner of Yakima Street and South Columbia Street in Wenatchee on September 29. 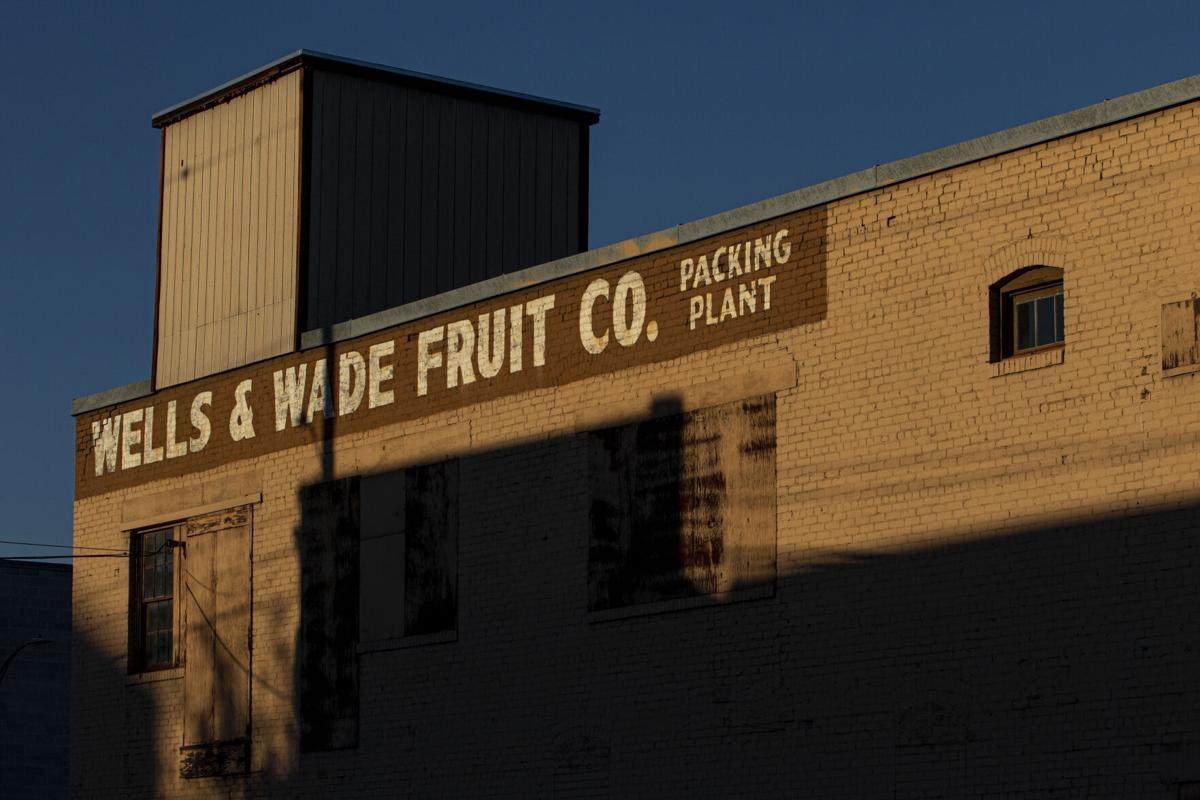 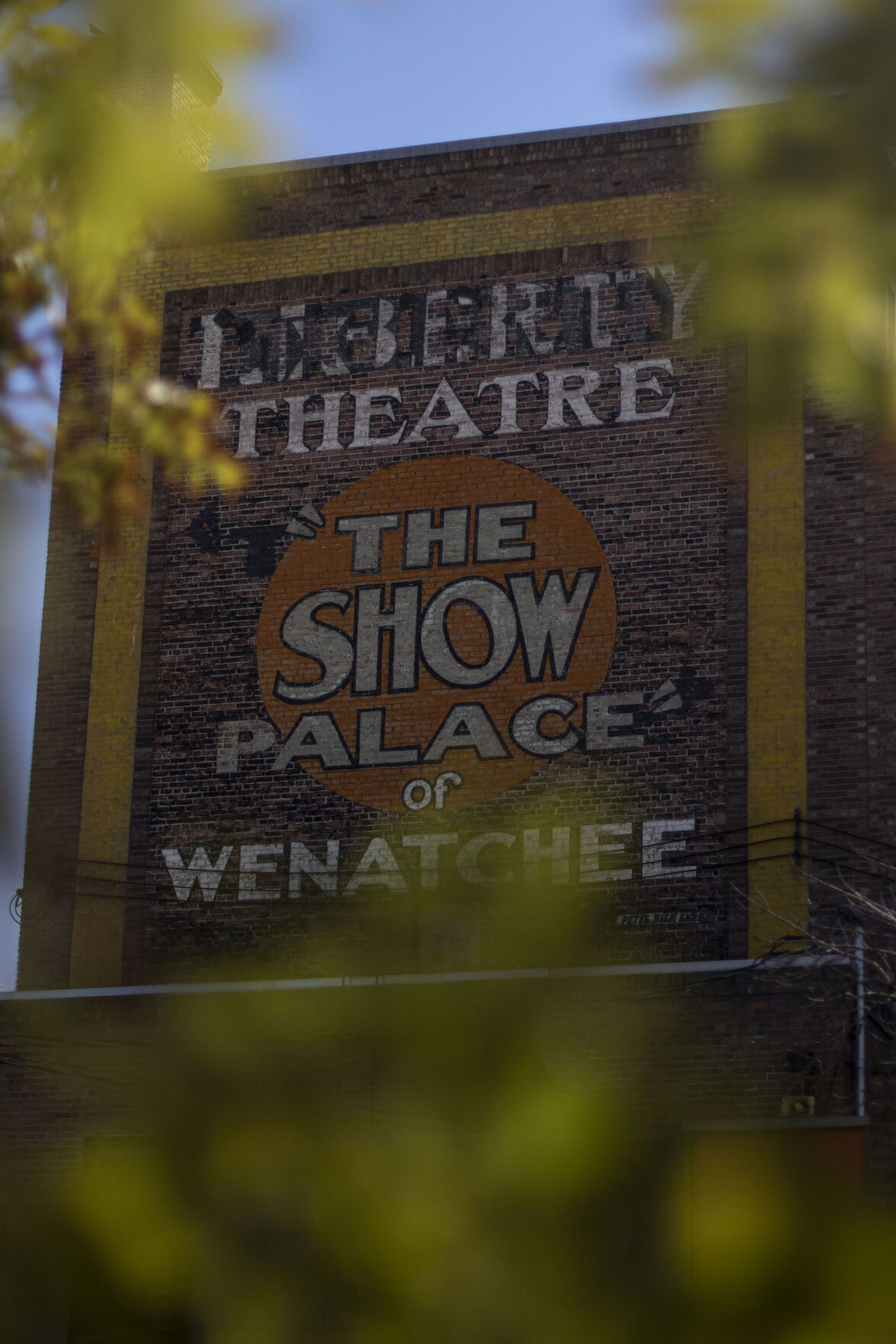 The Liberty Theater, which opened in 1920, is one of the most ghost visible signs in downtown Wenatchee. 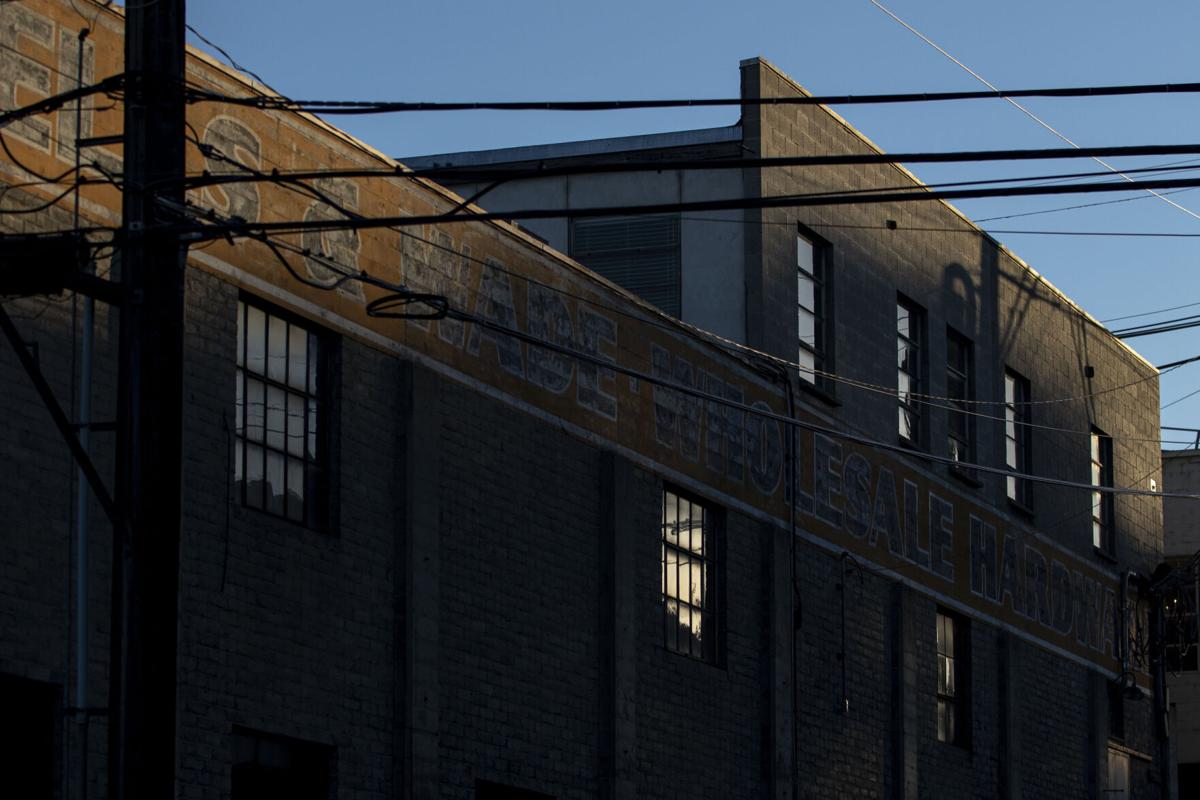 The Wells & Morris Hardware Co. building is illuminated in evening light at the corner of Yakima Street and South Columbia Street on September 29. 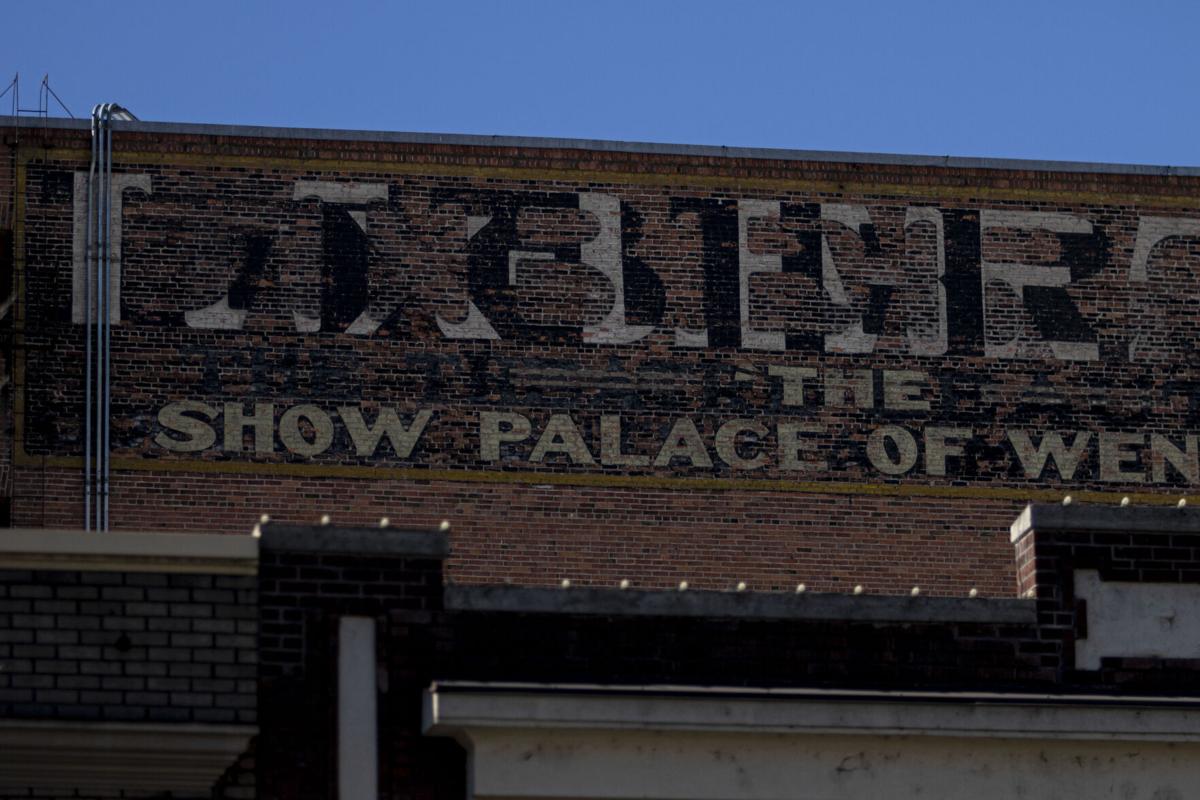 The Liberty Theater is flanked on three sides of its walls with ghost signs. 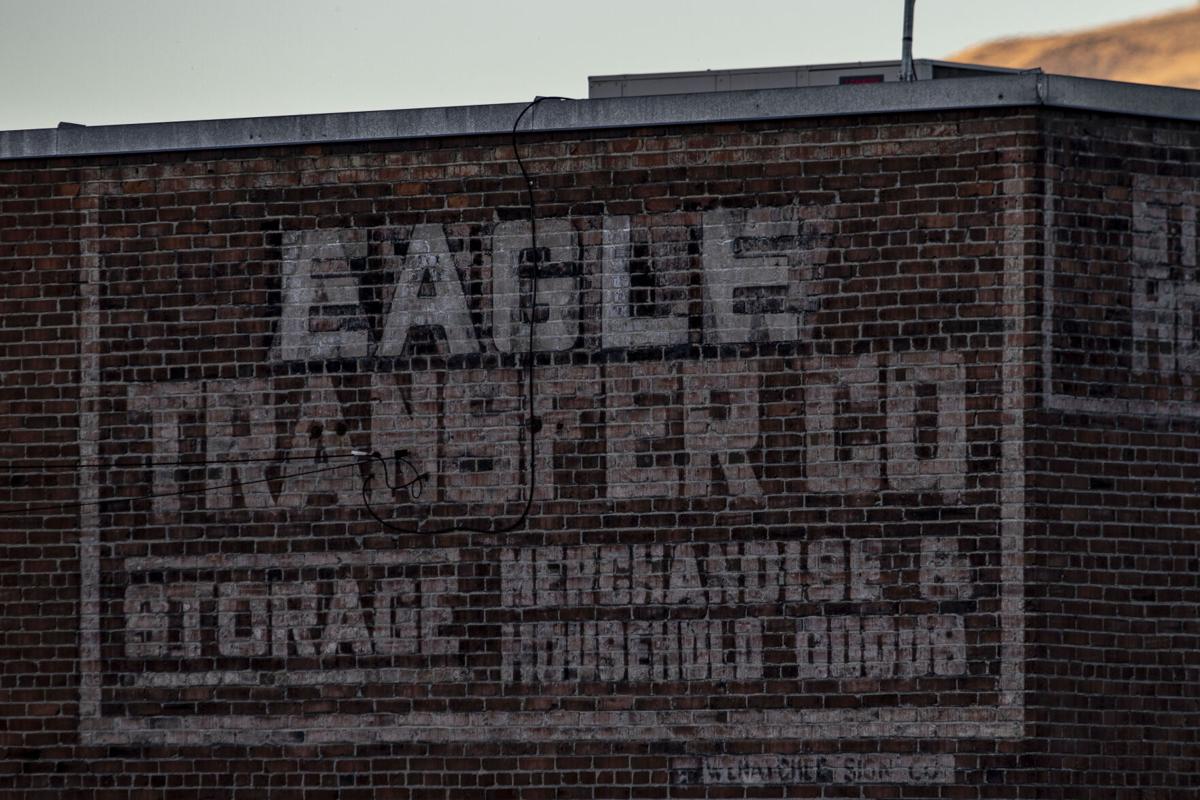 The Eagle Transfer Co. peaks over buildings on Kittitas Street September 29 in Wenatchee. 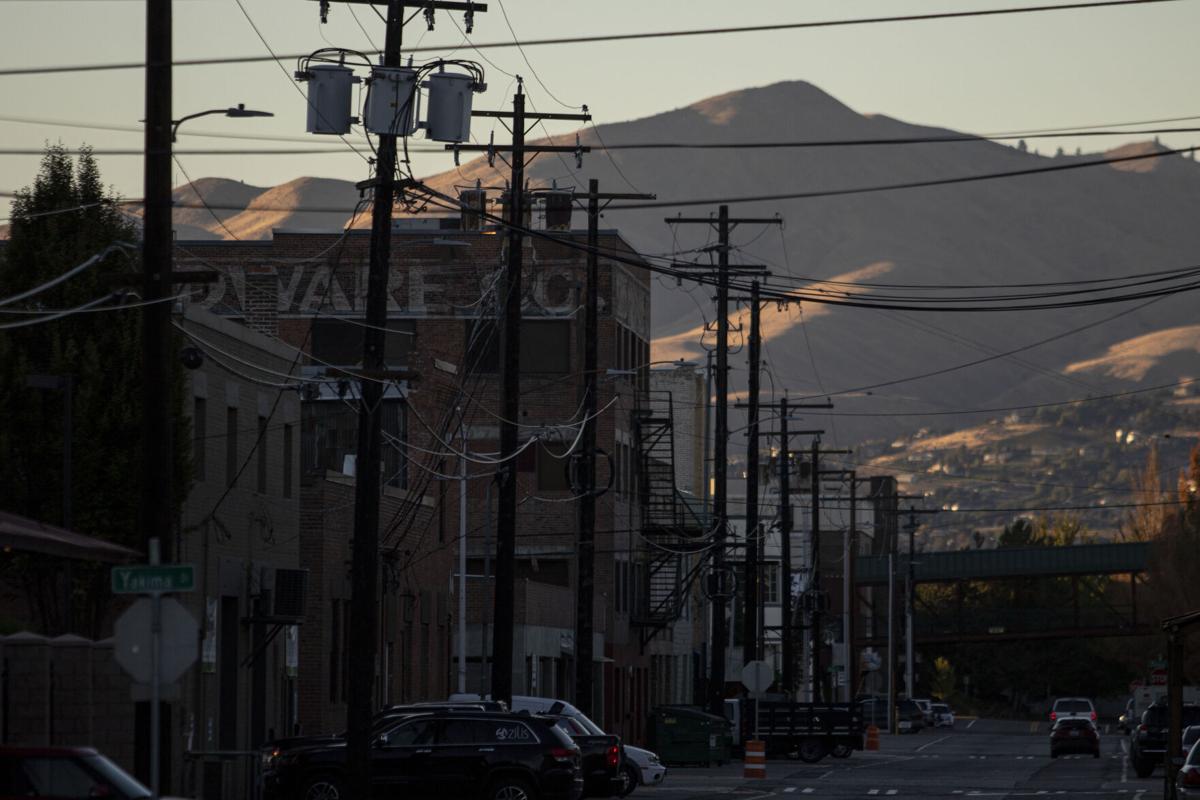 The now fading Wells & Morris Hardware Co. sign is located at the corner of Yakima Street and South Columbia Street. 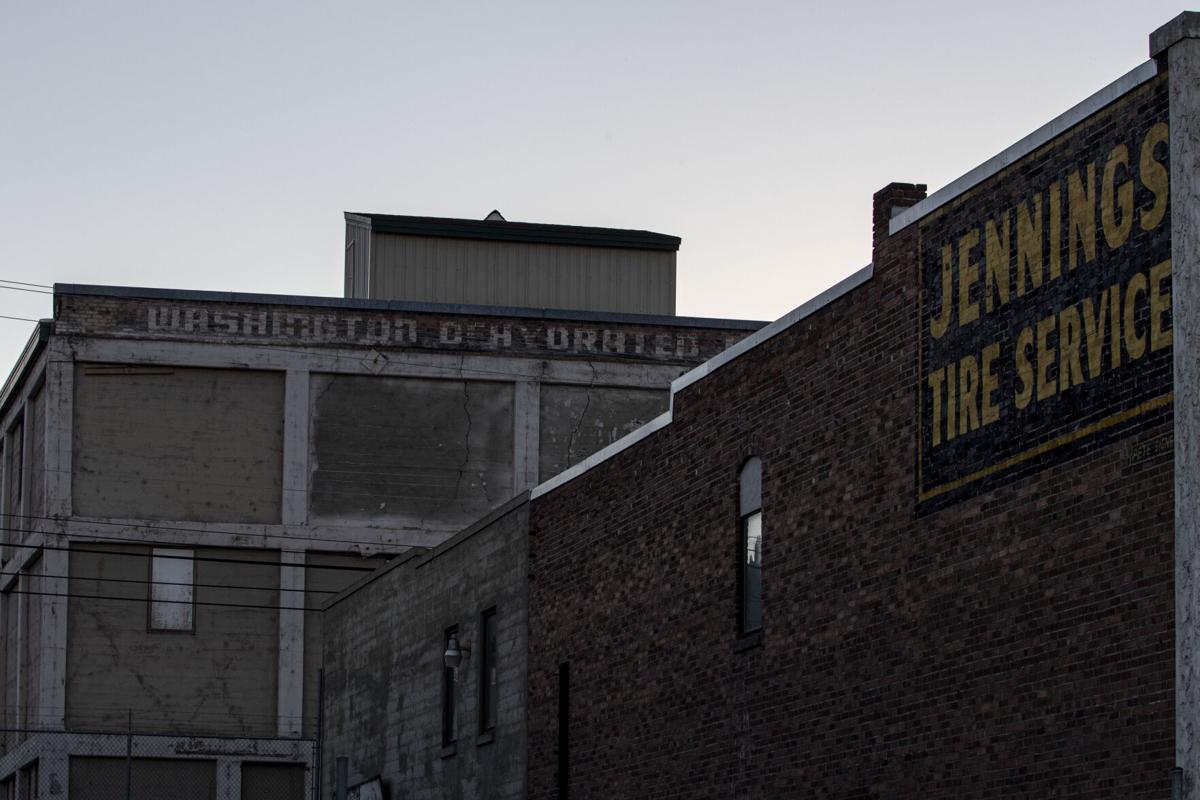 The Jennings Tire Service ghost sign can be found along South Wenatchee Avenue. 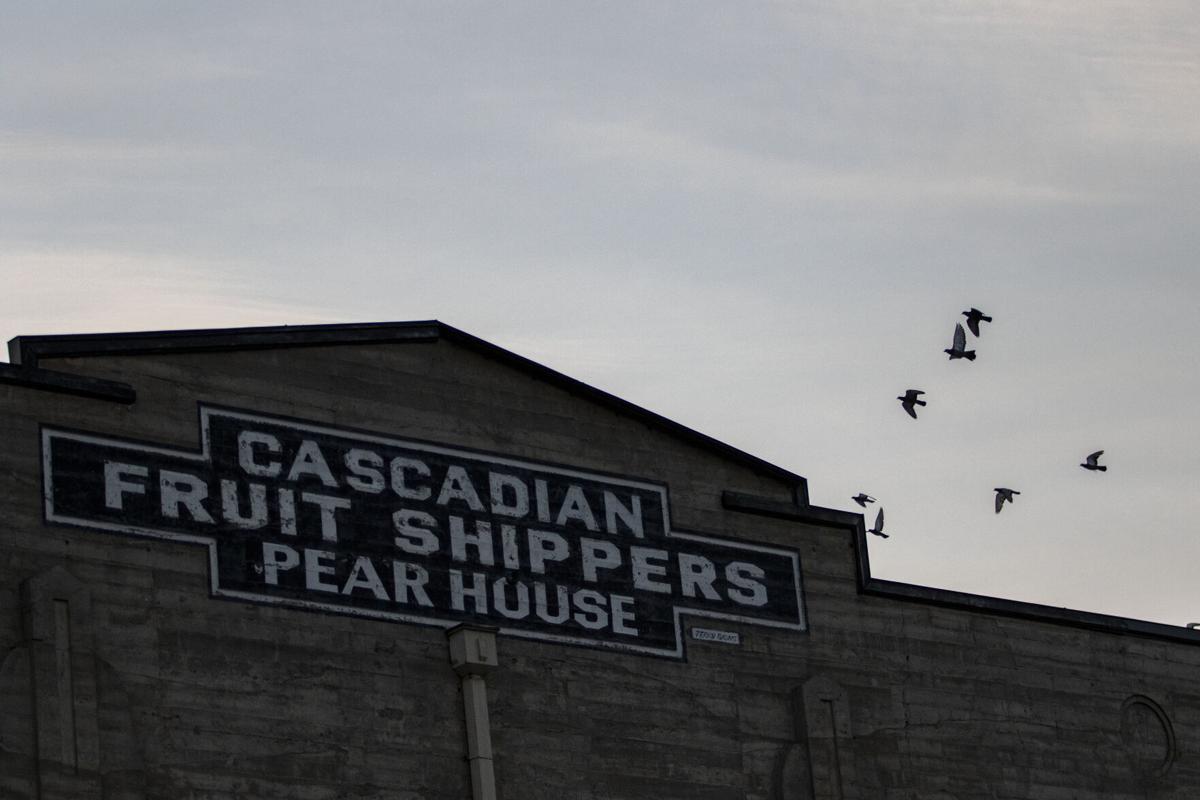 Birds fly over the top of the Cascadian Fruit Shippers building September 30 in Wenatchee. 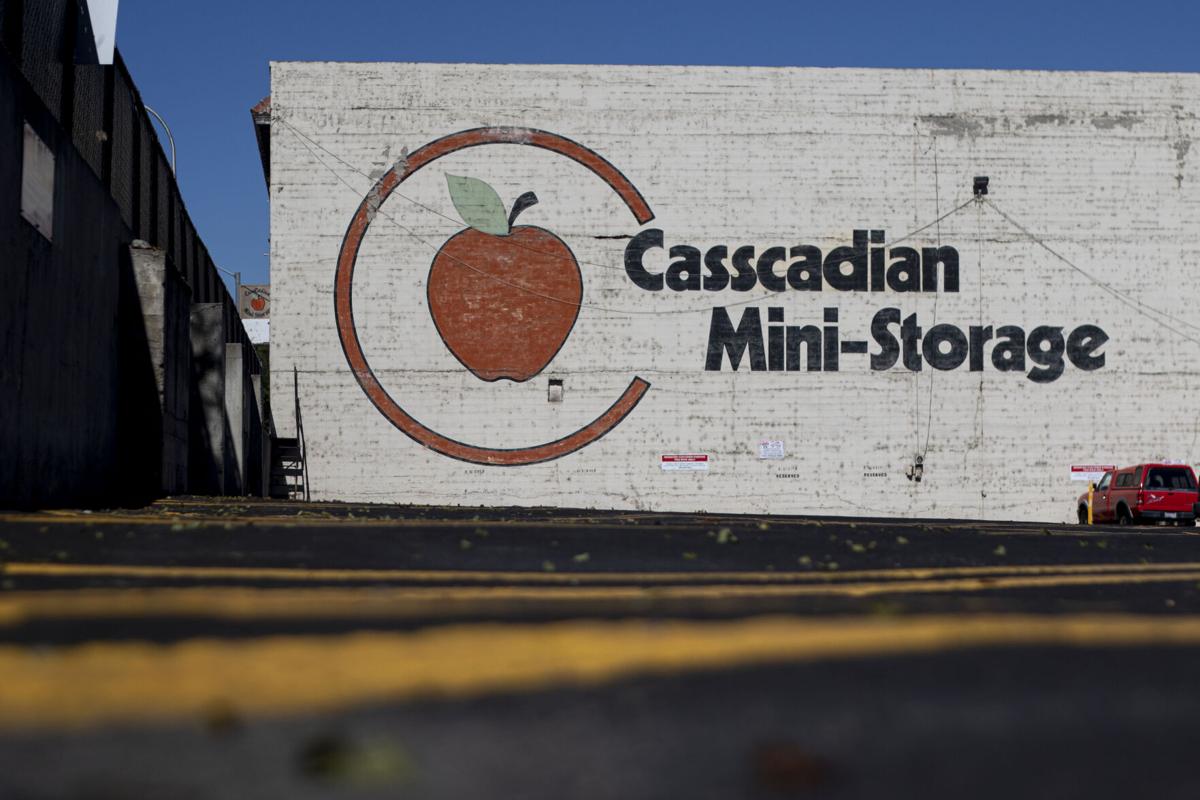 The Cascadian Mini storage ghost sign sits as a backdrop to for parked cars in downtown Wenatchee, September 29.

The Wells & Morris Hardware Co. building sits tucked away at the corner of Yakima Street and South Columbia Street in Wenatchee on September 29.

The Liberty Theater is flanked on three sides of its walls with ghost signs.

The now fading Wells & Morris Hardware Co. sign is located at the corner of Yakima Street and South Columbia Street.

The Jennings Tire Service ghost sign can be found along South Wenatchee Avenue.

Birds fly over the top of the Cascadian Fruit Shippers building September 30 in Wenatchee.

The Cascadian Mini storage ghost sign sits as a backdrop to for parked cars in downtown Wenatchee, September 29.

WENATCHEE — There are ghosts haunting Wenatchee’s downtown buildings, leaving their traces along brick walls and alleyways. Some allude to the area’s fruitful orchard industry, others to long-departed mechanics and blacksmiths, but all are rich with stories of the past.

Old advertising signs painted on the exterior of buildings are nicknamed “ghost signs.” The faded signs, equivalent to modern-day billboards, tend to haunt a building even after a business shutters. Though the initial businesses may have come and gone, the signs act as a reminder of a community’s history.

“There's just so much history, even in our little town," said Chris Rader, editor of the Wenatchee Valley Museum & Cultural Center’s quarterly historical magazine, The Confluence. Her 2013 fall and winter issues focused on the buildings and businesses of downtown Wenatchee.

In the early 20th century, hand-painted advertisements and business signs were a cultural norm of American capitalism. The 1920s through the '40s were the height of wall advertising before quickly being replaced by electric and neon signs.

In Wenatchee, zoning regulations for advertisements were not in place until 1957, according to Confluence magazine. The downtown then underwent a modernizing period in the ‘60s and ‘70s to compete with the advent of shopping malls. Original brick buildings were either covered with newer materials such as aluminum, Fiberglas or marblecrete, or torn down altogether. It wasn’t until 1994 that the city established comprehensive codes for size, materials and location of signage.

To preserve downtown’s integrity, in 2008 the National Register approved the Downtown Wenatchee Historic Register District, which spans from North First and Kittitas streets and Columbia and Mission streets.

Hand-painted signs are not only a symbol of history, but of a business’s affluence. Some of the signs bear names of local businessmen, including A.Z. Wells, Jim Wade and Henry Wiester. From recent estimates, hand-painted signs can cost from several hundred to several thousand dollars depending on size, according to The Atlantic.

“They show some of the more prosperous businesses, because it couldn't have been cheap,” Rader said. She added it might be a worthwhile investment, as they “fade slowly.”

Individuals that painted these signs were nicknamed “walldogs,” according to Atlas Obscura, an online magazine and travel company. Walldogs got their names because painters “worked like a dog,” in reference to the old idiom, and because to scale buildings they were often tethered to the walls.

Wenatchee’s famous wall dog was Pete Matson, who told The Wenatchee World in 1994 that he painted about 80% of the murals downtown. His mark on the city can still be seen with the Cascadian Mini-Storage sign on 33 N. Mission St., the Wells & Wade Fruit Co. sign on South Columbia Street and the “Liberty Theatre Show Place of Wenatchee” at 1 S. Mission St.

"He was the sign maker for Wenatchee," Rader said with emphasis on ‘the.’ "Pete is sort of the hero to me."

For over 34 years, Matson ran the biweekly classified ad "Pete made signs before he could talk" in the classified section of The World. He passed in 2003, but his personal shop at 201 S. Wenatchee Ave. keeps the signage history, now housing Terry Signs.

For Wenatchee, though, some of the ghost signs aren’t ghosts at all, but the bones of long-lasting community businesses. Eagle Transfer Co., whose sign can be seen on 234 S. Columbia St., is still alive and well. The Liberty Theatre is celebrating its centennial business year, opening in 1920.

“It instills a sense of pride that this town has been around for a long time and it's businesses have thrived,” Rader said. “People cherish them and enjoy the fact that it helps them connect to their history."

The Wenatchee World compiled a larger map of notable ghost signs in downtown Wenatchee. The map can be viewed online at wwrld.us/Ghost.

Here are six of the most memorable signs:

Al Morris and his uncle Alfred Z. “A.Z.” Wells moved to Wenatchee in 1902 and purchased the Frank Scheble hardware store and moved into the Rarey Building. The two co-owned the business until 1914, when Wells moved to the fruit industry managing his cousin's orchard and Morris kept the store. Wells later went on to co-found Wells & Wade Fruit Co. and Wells & Wade Hardware with businessman Jim Wade. Morris bought the lot at 23 S. Wenatchee Ave. and constructed the three-story brick building that still stands today. The ghost signs of the old hardware company, reading Morris Hardware Co., were completed by Carpenter Signs and can be seen from Columbia Street or from the left side alleyway.

The brick building on Wenatchee Avenue was built in 1905 by Henry Wiester, housing the businessman’s clothing store and later meat market. Later, two shoe shops took its place: Buster Brown shoe franchise and Huggins Shoe Shop. The building now houses Designer Floors, but you can see the ghost of the department store from the alley on Columbia Street. Whoever completed the sign included a mistake that would haunt downtown Wenatchee for the century to follow: Wiester is incorrectly spelled as Weister.

Wenatchee’s downtown movie theater, Liberty Theatre, opened at 1 S. Mission St. in 1920 originally as a home to vaudeville shows, operas, plays and concerts before moving exclusively to motion pictures. The large “Liberty Theatre Show Place of Wenatchee” sign on the left side of the building was Matson’s first major painting in the city, according to Wenatchee World archives. The Liberty Theatre also hosts a ghost sign in the rear alleyway, completed by Hub Sign Shop.

The H. Johannsen building at 510 S. Wenatchee Ave. was built in 1920. The building originally housed the Wenatchee Forge building before being bought by Harold Johannsen in 1924 for his blacksmithing storefront, according to Confluence magazine. Though Harold passed in 1957, the business was continued by his son, Warren Johannsen. Parts of the storefront were rented to other businesses, including Haynes Repair Shop Automotive and General Machine Work in the 1950s and 60s.

Next door to the Johannsen’s shop is Chuck’s Thrifty Gas, a gas station dating back to the 1930s. The business belonged to Chuck Shaw, but is now closed and gated with the original appearance — and $0.29 gas prices — still on display. Both buildings are owned by local businessman and Eagle Transfer Co. owner Mike Walker, who knew both Warren Johannsen and Chuck Shaw.

One of Wenatchee’s most iconic ghost signs, the Swift’s Premium Ham-Bacon with the caricature of an oblong ham, isn’t native to the Valley. Founded by Gustavis Swift in the late 19th century, Swift’s was one of the largest meat-packing businesses in the late 19th and early 20th centuries. Swift was the first to engineer the refrigerated railway train car to transport meat across the county.

Swift’s is now part of the largest meat-packing company in the world after merging with worldwide meat production company JBS. The peculiar sign has become an interesting feature to the city’s downtown, and is a favorite among residents, including Rader's.

The Eagle Transfer Co. was founded in 1903 and still leaves its imprint on Wenatchee’s downtown today. Newcomers to the Valley would have been greeted by an Eagle Livery and Transfer horse and buggy at the boat docks or train station, according to the 2004 picture book "Wenatchee Valley: Images of North Central Washington Volume II," published by The World. The need for storage of goods and produce began to grow in the 1920s, with the advent of additional warehouses along the railroad being erected downtown.

Mostly the business moved household goods or cargo for newcomers, but expanded to postal services, storage and road movement of rail containers. Eagle Transfer constructed a 75,000 square foot storage facility in the 1990s and moved from 234 S. Columbia St. to 1751 N. Wenatchee Ave.

Jess Walter describes his new novel, 'The Cold Millions,' as 'melody of the sentences'

2020 Halloween roundup: The year of the drive-thru

Check It Out: The Tell-Tale Gaze casts actors as living paintings

How does Netflix's new 'Rebecca' stack up against the Hitchcock classic and novel?

5 movies to watch before Halloween

Creating an open conversation about mental health through music and storytelling