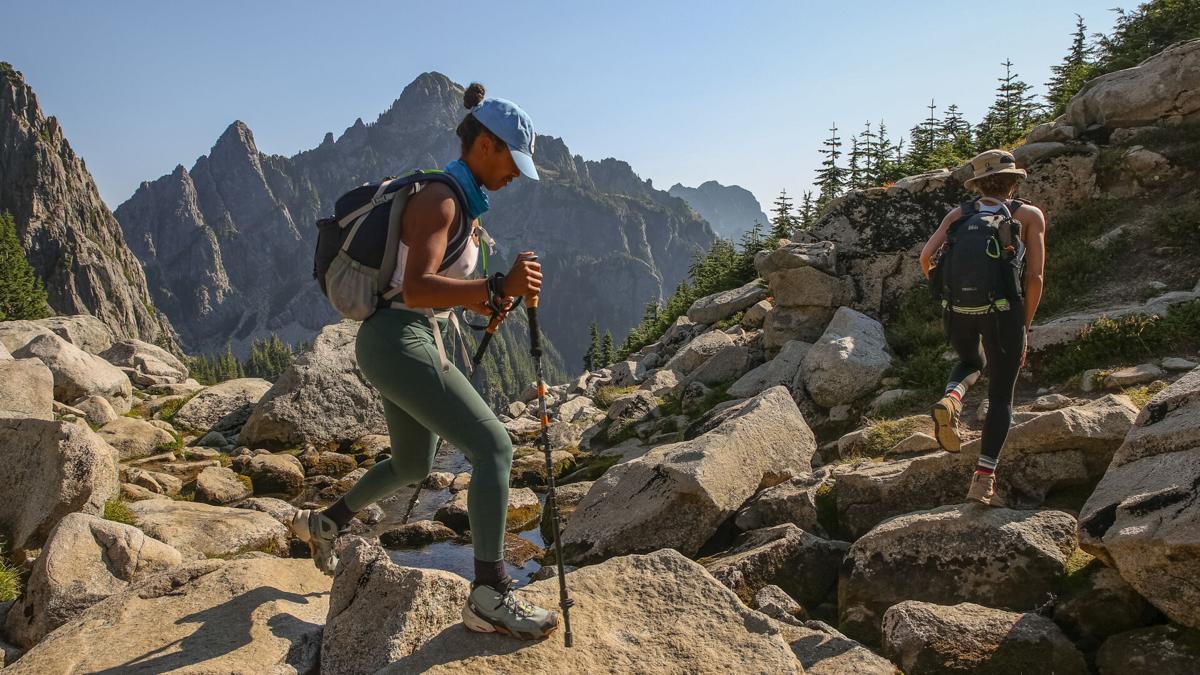 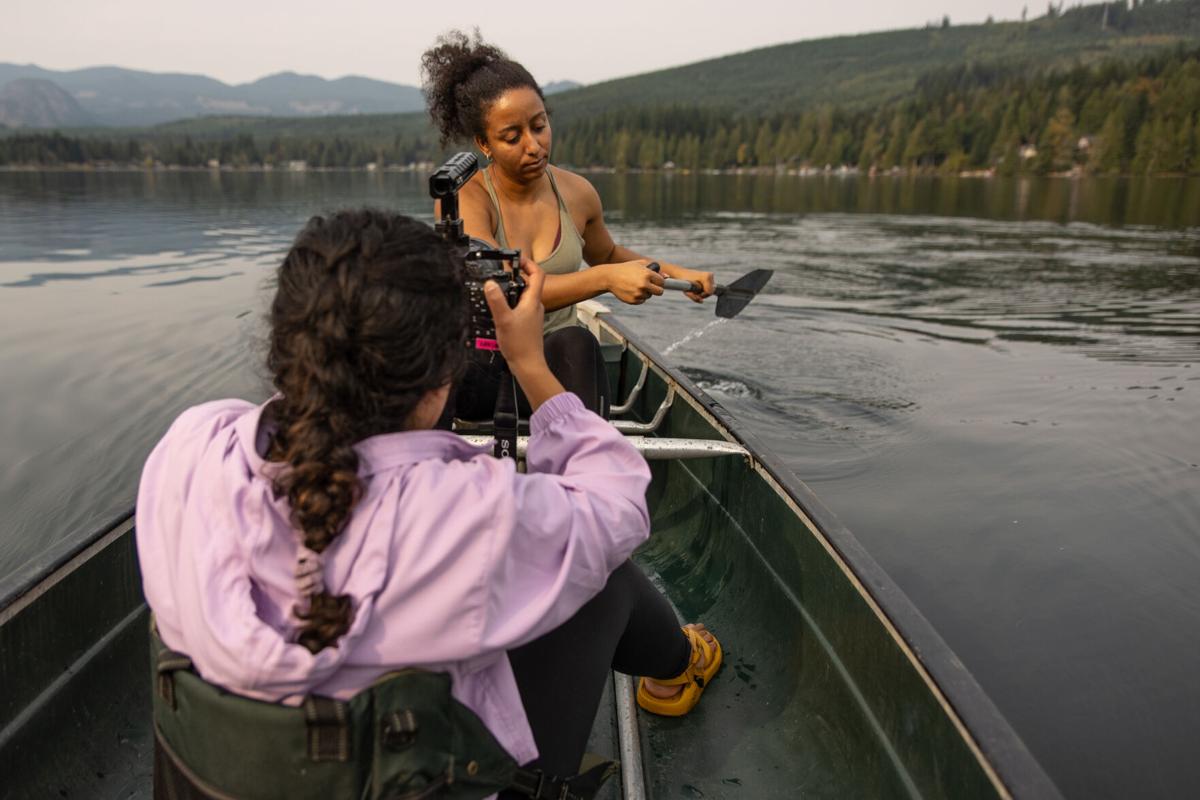 Kaja Ralston rows on Lake Cavanaugh in Skagit County as Sanjana Sekhar captures footage during film production of "Expedition Reclamation" in October. A portion of the proceeds made from the film will be donated to the Wenatchi Land Back fundraiser. 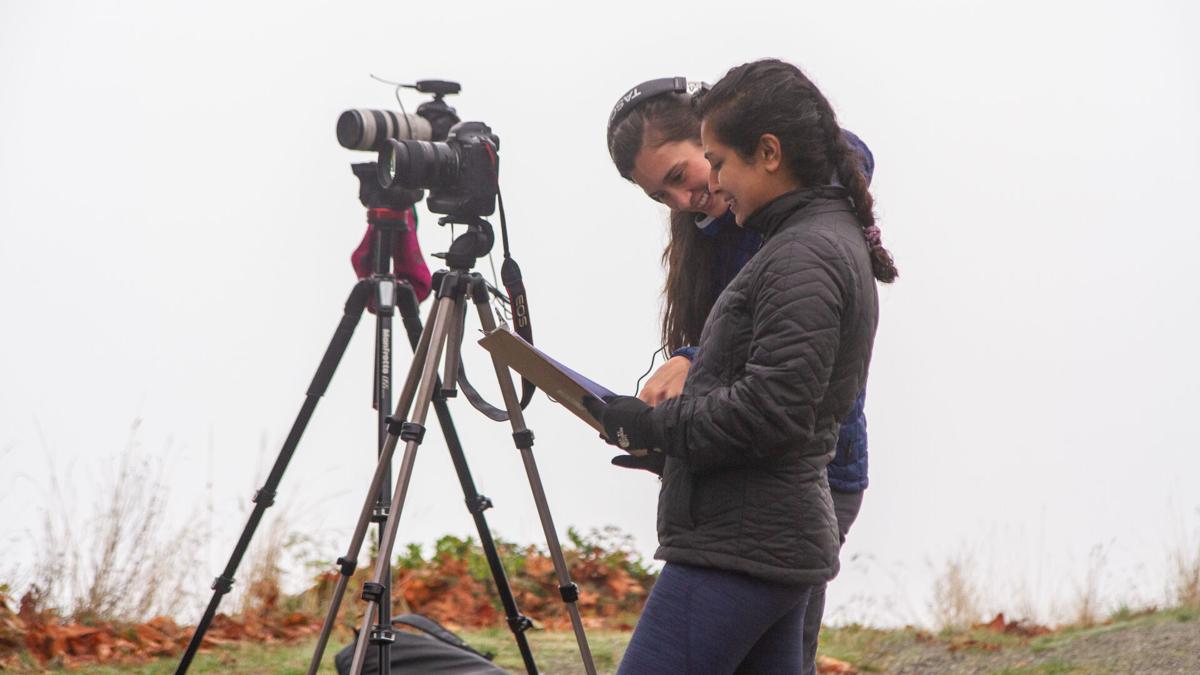 Co-directors Sanjana Sekhar, front, and Erin Joy Nash look over interview questions during an October interview while filming the documentary. 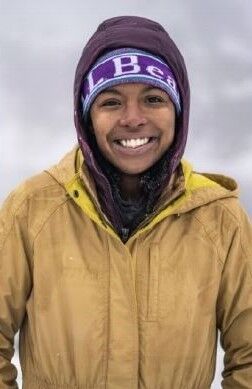 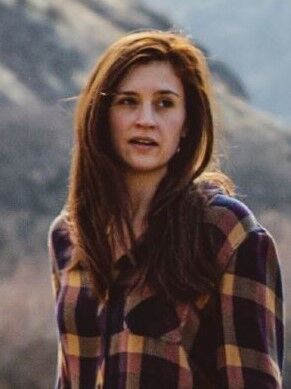 Kaja Ralston rows on Lake Cavanaugh in Skagit County as Sanjana Sekhar captures footage during film production of "Expedition Reclamation" in October. A portion of the proceeds made from the film will be donated to the Wenatchi Land Back fundraiser.

Co-directors Sanjana Sekhar, front, and Erin Joy Nash look over interview questions during an October interview while filming the documentary.

A Wenatchee Valley duo has made a documentary film in an attempt to expand what people see as being outdoorsy.

“Expedition Reclamation,” the collective brainchild of Chelsea Murphy and Erin Joy Nash, features a diverse range of people from around the Pacific Northwest.

Nash has a background in visual journalism and nonprofit work. She has worked with Icicle Center for the Arts and Voortex Productions in Leavenworth and in 2019 directed the short film “Fail Forward Fast.”

Murphy is an activist, speaker and writer with a focus on nature. She has helped fundraise for the Colville Confederated Tribes Children and Family Services and spoke in front of roughly 2,000 people at Leavenworth’s largest Black Lives Matter march in June.

Their 20-minute film focuses on reclaiming belonging in the outdoors for Black, Indigenous and women of color communities.

Nash and Murphy also touch on the importance of giving back to the environment and using tribal names of locations, such as the P'Squosa, also known as the Wenatchi, as a way of honoring the land. Their goal is to shift away from thinking about what one can take, but rather how one can give back.

In their words, “we’re redefining outdoorsy.”

This Q&A has been shortened for clarity.

Wenatchee World: What stories are told in this film?

Chelsea Murphy: I think my best description of this film is “not your average outdoor film.” It’s a film that, behind the lens, you have more of a broader scope of what the outdoors means to us, being a crew [of] multicultural women.

The film is basically just a collective voice of people in the outdoors that don’t usually get represented in outdoor films.

For me, someone that’s been to film festivals, I don’t often see myself in those films, as rad and as awesome and as epic as they are, they don’t inspire me to do much of anything, because I’m never really represented visually in them.

Erin Joy Nash: We have women who have told their stories about just going out in the woods and forest bathing or being in their garden, and this message that, that is being outdoorsy, and that is creating a relationship with nature.

In a lot of these women’s stories, they are reconnecting what it means to have a reciprocal relationship with nature, and not this colonial view of “what can I get from this experience or what can I get when I go outdoors.”

WW: Could you tell me about the 12 women who are featured?

Nash: We ended up honing in on 12 women who live in Washington state. For a full week, we went out and met with these women outdoors. We interviewed them and then we went on an outdoor adventure, whether that was just a walk in the woods, or paddleboarding, snowshoeing [or] rock climbing. The film is this weaving together of all of these adventures that we went on with a tapestry of stories underneath.

Murphy: You get your peak bagging, rad stuff like that. But we include the basic or the mediocre things that we’re doing in the outdoors as well. I think people that come for the stoke are going to get exactly what they’re looking for and the people that really just want to hear a good story and maybe cry a little are going to get what they want out of the film.

WW: What inspired the film?

Nash: My motivation was just kind of growing up in this world, that is very white centered. And then having this awakening in my adult life [that] there is not representation on screen or in films or in outdoor media or advertisements of who is actually outdoors. And also waking up to the fact that there are barriers for Black, Indigenous and people of color to get outdoors. I think that until we hear everyone’s stories, we’re not going to be able to heal collectively [or] create a space that is truly inclusive.

Murphy: I’ve got two little girls that love to get outdoors and we live down in Leavenworth. There’s not a lot of representation in the physical spaces of being in the outdoors, in our favorite campsite or going paddle boarding down Icicle River or hitting the local trails or Ski Hill. It’s just, we’re always kind of the onlys. It’s really important to me that the handful of little Black kids that are at Dryden Elementary, maybe come to see this film, to see that there are so many more possibilities for them then what they are restricted to in normal outdoor films.

WW: How does the film deconstruct stereotypes?

Murphy: I have had people come to me saying things like “Black people don’t like the snow and that’s why we don’t see Black people out on the ski resorts,” completely perpetuating the idea that Black people don’t. Our film [is] deconstructing, through images and the visuals, that Black people do hike, and we love the snow, and Asian, Latinx, Indian American people, they do climb. We have a plus-size woman that’s up there on the side of a climbing rock just totally crushing it.

Nash: We are deconstructing the storytelling process. We didn’t write out all of our own interview questions. We spent a lot of time talking with ... women about what do [they] think this [film] should be about. We’re not going to come in pretending like, we know your lives and we are the experts on your individual-lived experiences.

WW: What sort of outdoor excursions did you film?

Murphy: We started out paddleboarding. Then we took off for the west side and did some climbing. Lots of rock climbing.

Nash: One of our characters is a musician. And she gets inspiration from nature. So she writes spoken word and she writes music outside, which is not something that you would typically think of as an outdoor activity, but that’s totally her outdoor activity. Also, outdoor yoga [and] we bagged a peak.

WW: Who is this film for?

Murphy: Everyone, literally everyone, needs to see this film. It’ll be really exciting to start to see what people take away from it. I’m really excited for our community to see it. I want to be able to sit down in a room and be able to watch this film and have everyone take away something a little bit different, but you know, good feelings.

Nash: We don’t want people to be like, “oh, that’s that outdoor film about BIPOC (Black, Indigenous and people of color). It’s not for me.” This is for everybody.

Filmmakers Chelsea Murphy and Erin Joy Nash are submitting “Expedition Reclamation” to film festivals starting in August before releasing the film online to the public. A portion of proceeds made from the film will be donated to the Wenatchi Land Back fundraiser. To view a three-minute trailer and support the project, visit bravespaceproject.org.

Get crafty with DIY earrings

Cashmere museum prepares for changing of the guard