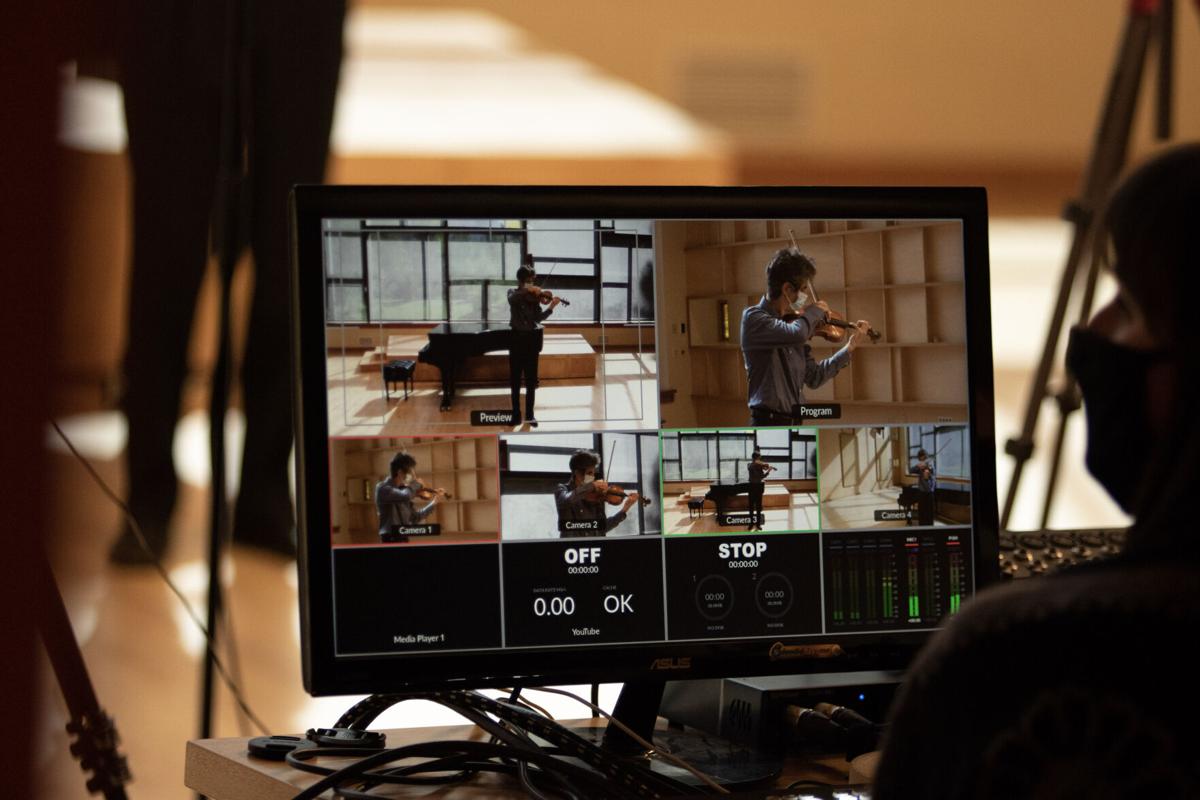 Violinist Blaise Magniere practices for a virtual performance at the Icicle Creek Center for the Arts. 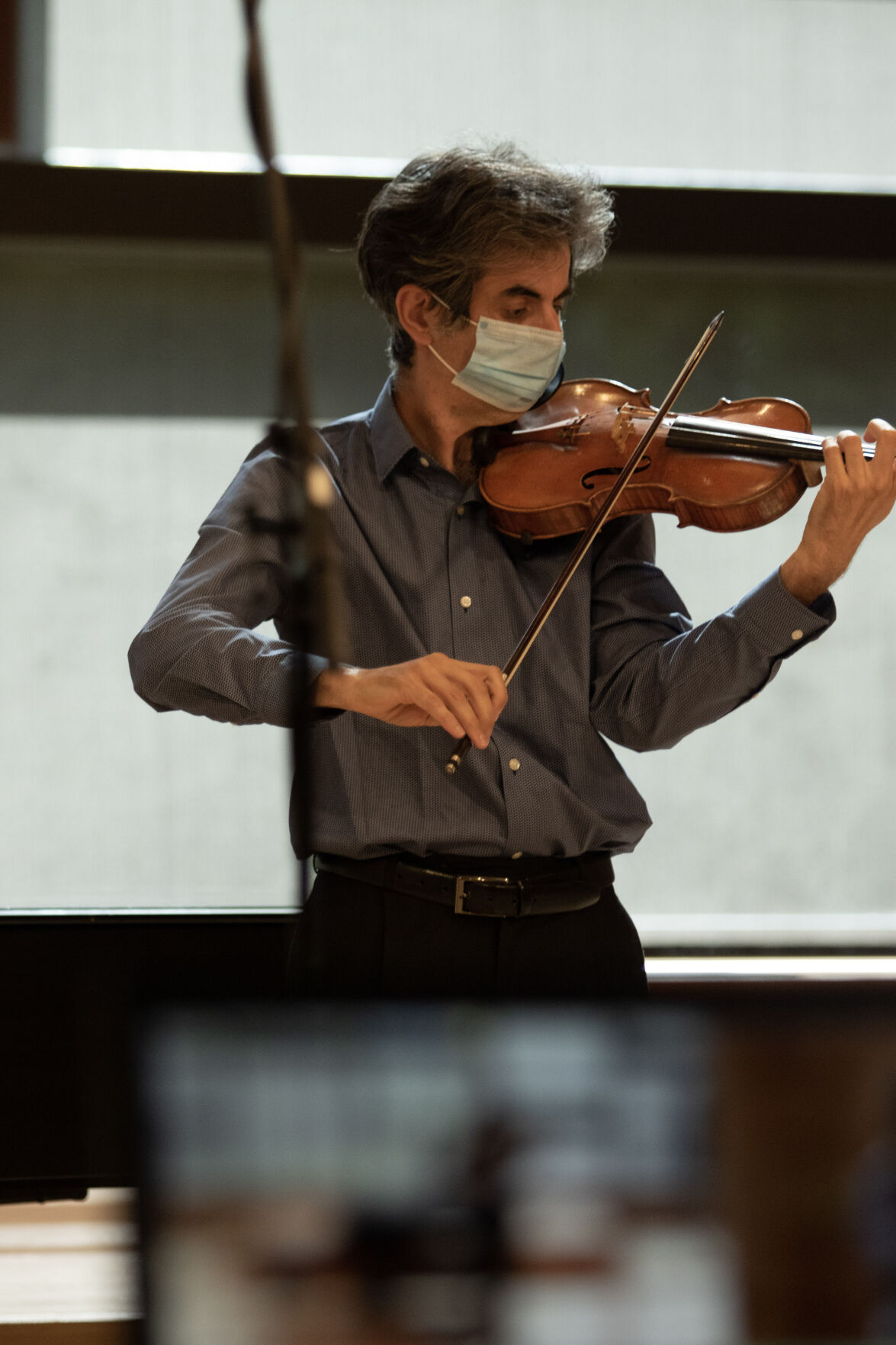 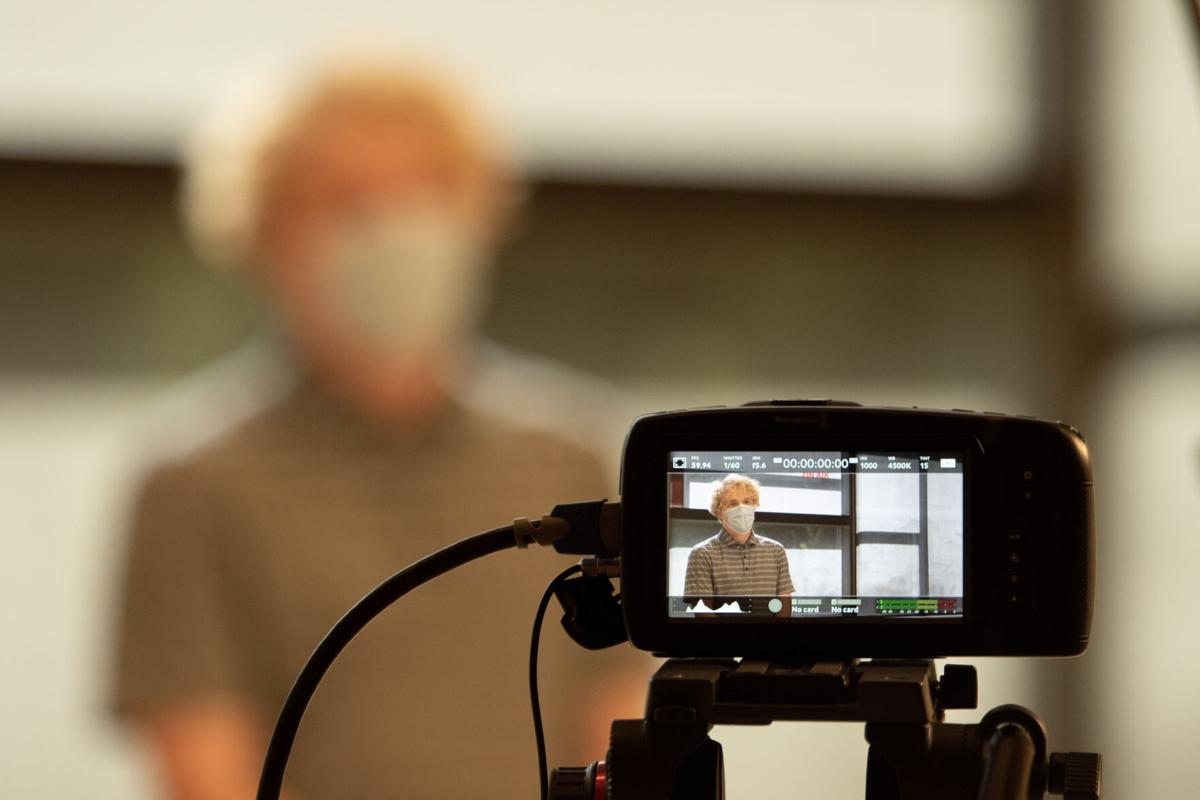 Mason Elliott helps set up a shot for a virtual concert at Icicle Creek Center for the Arts.

Violinist Blaise Magniere practices for a virtual performance at the Icicle Creek Center for the Arts.

Mason Elliott helps set up a shot for a virtual concert at Icicle Creek Center for the Arts.

Violinist Blaise Magniere slowly lifted his bow; the hall he stood in was nearly silent. He paused. Then slowly, articulately, Magniere began playing to his audience — six cameras.

Musicians, like Magniere, are finding alternative ways to share their music due to state and nationwide laws prohibiting large gatherings. But playing in an empty hall is a major shift from in-person concerts and comes with its own set of challenges.

This, of course, is a very different experience, said Magniere. “We’re trying to get used to it.”

Magniere’s performance on July 22 was part of Icicle Creek Center for the Arts’ Chamber Music Festival, an annual event normally open to large groups of people. This year, Icicle is opting for virtual concerts. The festival wraps on Aug. 1.

Having even just one person in the audience makes a big difference when performing, “you feel more alive,” Magniere said. The closeness of cameras and sound engineers is unusual. It takes getting used to, he said, and “you definitely feel a lot more vulnerable.”

“Even if you think you’re playing for people that are watching online, it’s just not the same,” he said. “ ... Getting feedback from the audience is crucial.”

And, moving things online is challenging because it is about consuming rather than the more interactive experience that comes with a live, face-to-face concert, she said. Most musicians as of lately are limited to just playing in their living rooms.

Phelps also played virtually in June. The performance was her doctoral graduation recital, which normally would have allowed for an audience. But, a lot of friends and family listened to that virtual recital, she said.

Performing is “not about us; it’s about that need to have a connection with other people,” she said.

It is much better to have interactions with people than to livestream, he said. Videoing these performances essentially just involves “me in my basement with my wife holding a phone.”

Some live music streams get several thousand views but “I didn’t get many people,” he said. It just did not seem like there was much point, he said, in continuing to attempt the livestream shows.

On the road, performing is as much an event for the performer as it is those coming to watch, Slowe said. “I’ve been in my basement a lot, I know what’s down there, [and] it’s not much of a trip,” he said.

Slowe decided to hold off on livestreams until he could get back to normal performances.

The absence of live performances has not only changed how he spends his time but also the structure of his music. Slowe said he now writes all of his music electronically and is more focused on producing music.

The interactions that come along with live performances and going out to different venues “is something you miss,” he said.