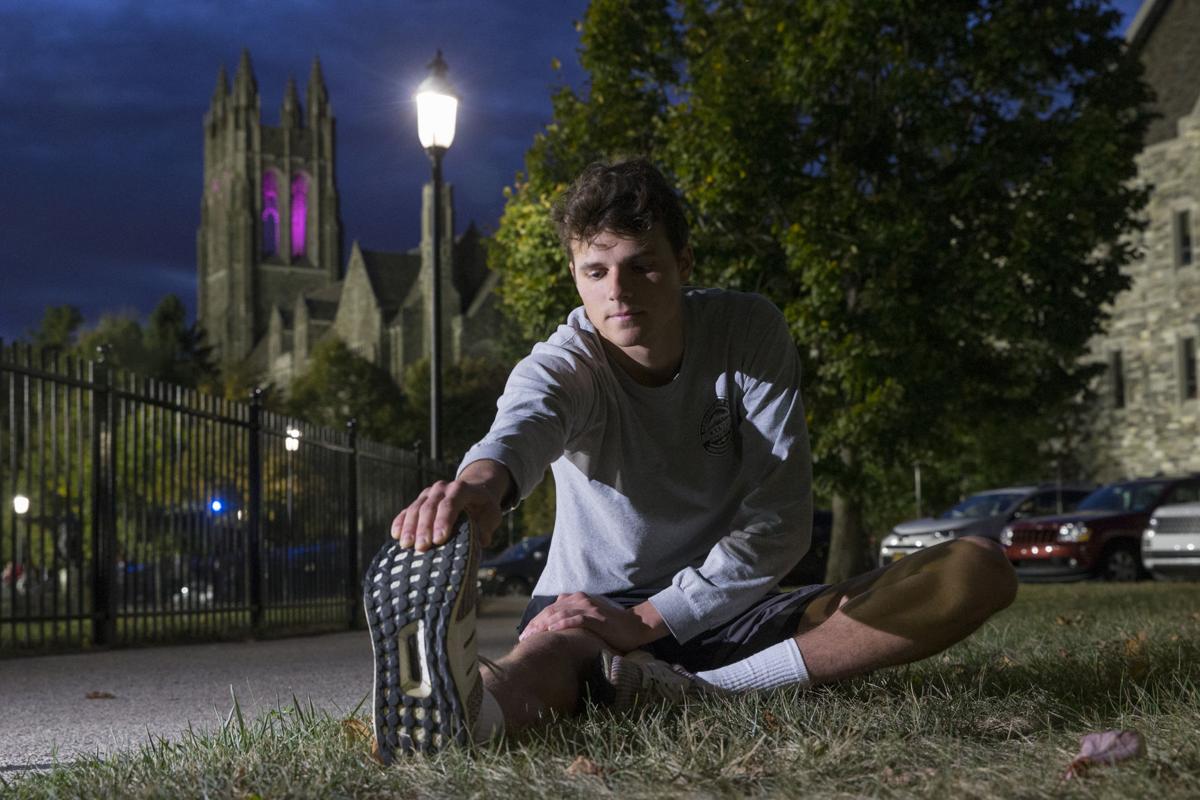 Ethan Widrig, a St. Joseph's student, stretches before running on Oct. 11. Widrig is running a 5K every single day for 100 days to raise money for Alzheimer's awareness and research. He usually runs at night. 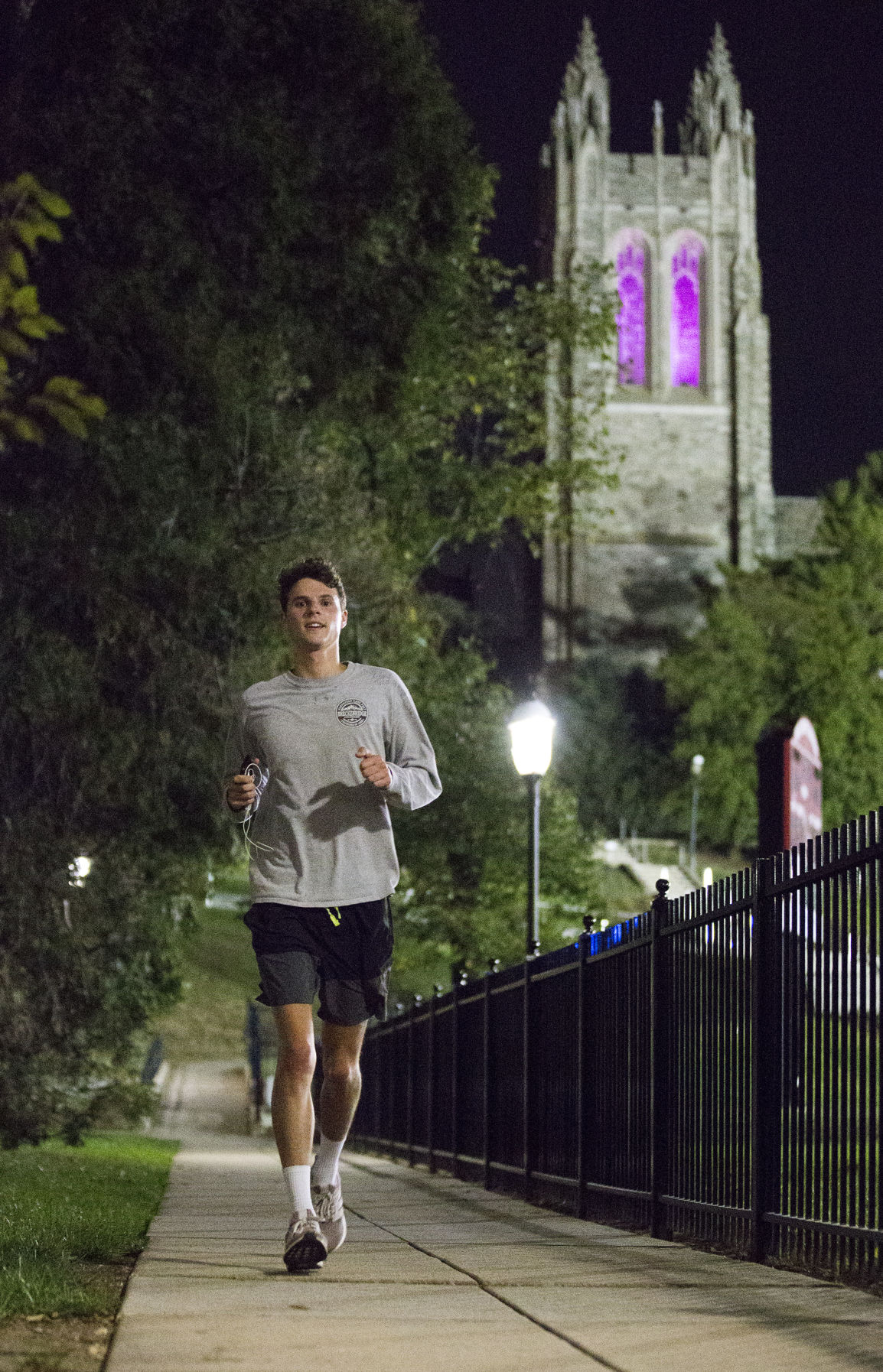 Ethan Widrig, a St. Joseph's student, goes for a run on Oct. 11. Widrig is running a 5K every single day for 100 days to raise money for Alzheimer's awareness and research. He usually runs at night.

Ethan Widrig, a St. Joseph's student, stretches before running on Oct. 11. Widrig is running a 5K every single day for 100 days to raise money for Alzheimer's awareness and research. He usually runs at night.

Ethan Widrig, a St. Joseph's student, goes for a run on Oct. 11. Widrig is running a 5K every single day for 100 days to raise money for Alzheimer's awareness and research. He usually runs at night.

PHILADELPHIA — As June Widrig was in her final years, she and her family had a weekly tradition: dinner at Chili’s every Sunday. She’d ask everyone around the table what they were ordering — the answers were always the same — and when it was her turn, she’d proclaim that she had settled on a big, juicy hamburger.

She was in her 70s, battling Alzheimer’s and deteriorating, but the weekly moment gave her family an important sense of levity, no matter how fleeting.

Today, more than five years after she died, June’s 21-year-old grandson Ethan Widrig has a new tradition in her memory: This one is daily, and it’s meant to support not just those battling Alzheimer’s like June had, but also the families and caregivers who are so often the disease’s unspoken victims.

Every day since Aug. 26, Widrig, a senior at St. Joseph’s University, has run a 5K. And he plans to run a 5K every single day until Dec. 3. That’s 100 days of 3.1-mile runs, or 500 kilometers, far enough to run from Philadelphia to Pittsburgh. He’s sticking with it to raise money for the Alzheimer’s Foundation of America, a nonprofit founded in 2002 to both fund Alzheimer’s research and provide services and support to caregivers. His initial fund-raising goal is $2,000.

And while Widrig typically gets his mileage in at 11 p.m. around the track at St. Joe’s, he’s organized runs at more reasonable times with other participants, including running partners who support his cause and entire groups of service-minded students, like a fraternity and even the school’s Gaelic football team, who tag along with him.

“I wanted to make it something where the community could come run with me if they wanted to,” Widrig, of Bedford, N.H., said, “so more people can support the cause.”

Widrig ends every run the same way: Posting a photo of himself standing, usually with two thumbs up, on his Instagram account to let his followers know he did his daily 5K.

Charles J. Fuschillo Jr., president and CEO of the AFA, said the team Widrig has built and the support system he’s cultivated is reminiscent of why the foundation was founded in the first place: to provide a support network to caregivers and family members dealing with the effects of Alzheimer’s.

“He’s raising awareness, but his partnership with the Alzheimer’s Foundation of America is allowing people to get to know the foundation and that there is a place to turn for help,” Fuschillo said. “And that is so critically important.”

He added: “We believe you’re never too young to learn to be a caregiver. He’s our champion.”

Widrig, a senior studying accounting and finance, said he’d never run an organized 5K before, but ran casually from time-to-time and this past year was hoping to plan a 5K on campus to raise money for Alzheimer’s research and awareness. He had plenty of support from other students who had their own experiences and connections to the disease, but he found that planning an event that takes permits and capital proved challenging. His idea ultimately fell through.

Widrig found the inspiration he needed, and “100 days of 5Ks” was born.

Since that first 5K, Widrig has gotten progressively faster, at one point clocking in at 17 minutes and 15 seconds. That’s a sub-6-minute mile average pace.

Widrig also knows that winter is coming, and that the week over fall break at home in New Hampshire might be the most challenging leg of his journey.

“Hopefully the snow holds off until after December 3,” he said. “But at the end of the day, I can’t miss a day. So the cause keeps me focused.”

This elementary school principal will do anything for his students, including cutting their hair

Pet of the Week | Meet Homer

Link Transit board passes budget to include expansion plans