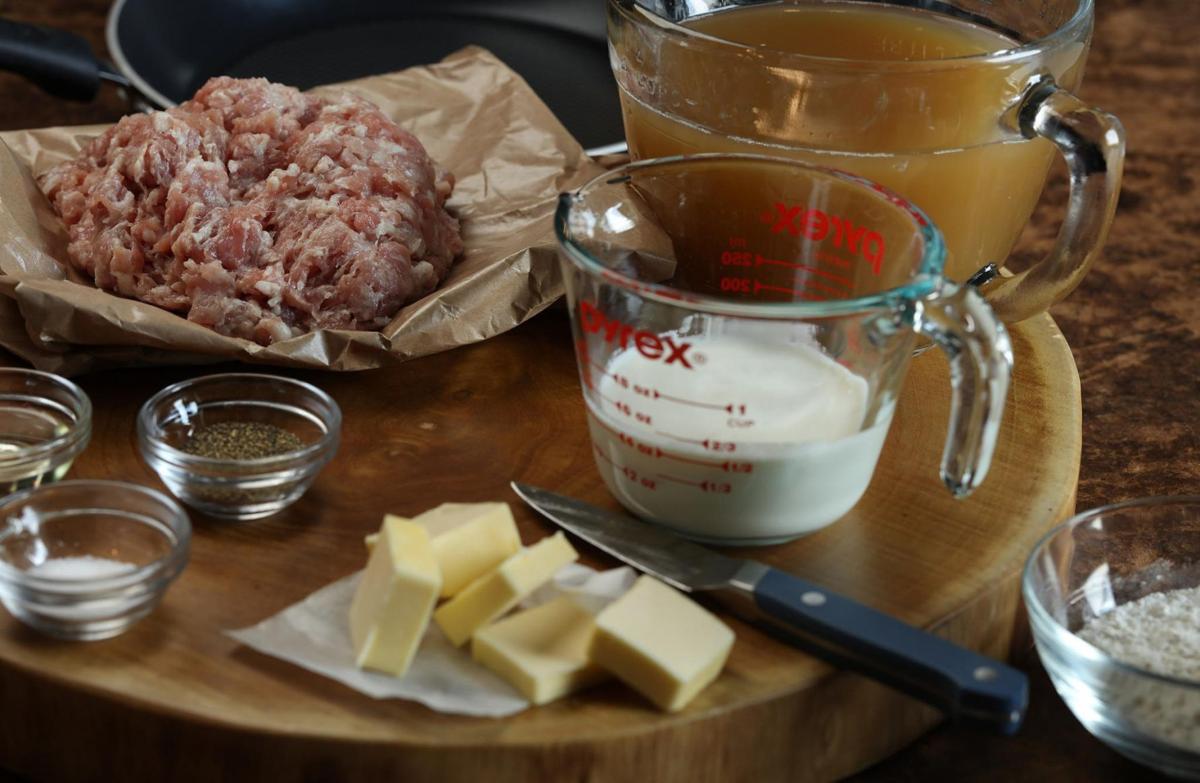 Sausage gravy is made up of just a few ingredients, so the quality of the sausage itself is a key factor. 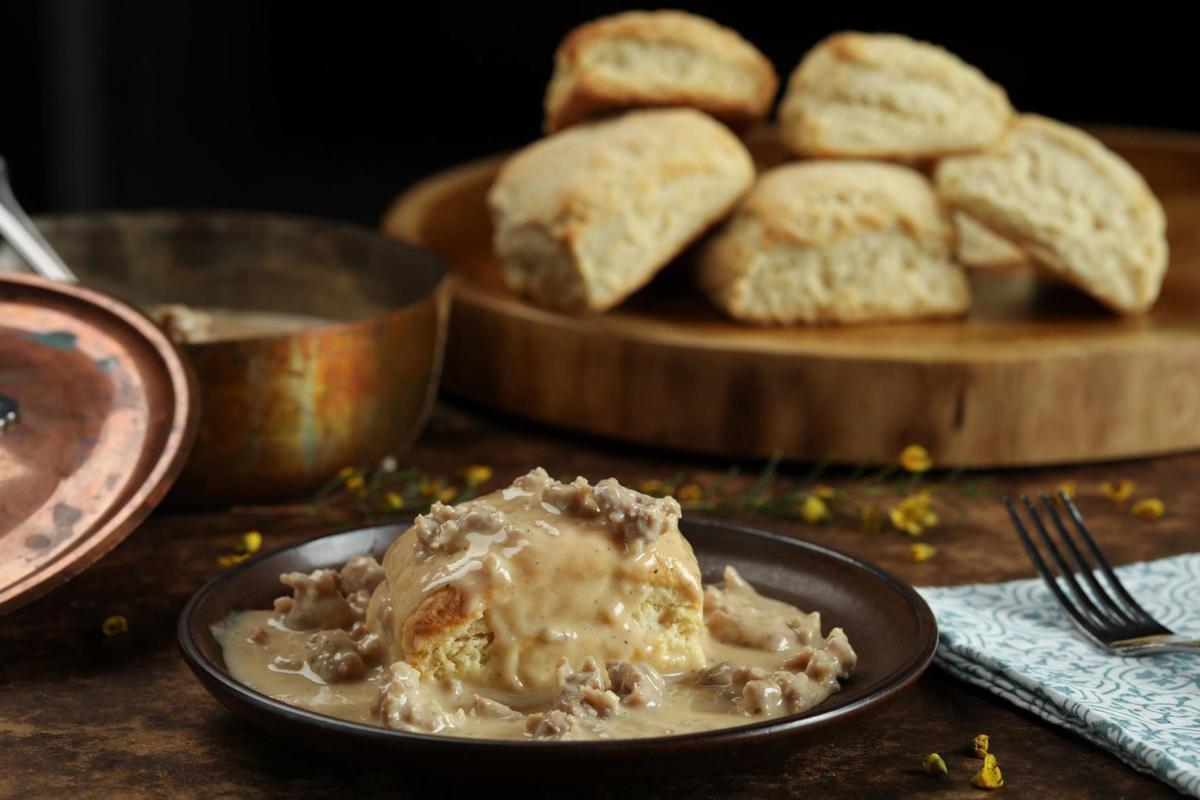 Serve the gravy over biscuits, whole or split, as you prefer.

Sausage gravy is made up of just a few ingredients, so the quality of the sausage itself is a key factor.

Serve the gravy over biscuits, whole or split, as you prefer.

What’s white and lumpy and hails from the American South? Besides me, I mean.

That’s right. It’s our old pal sausage gravy, the dish for which the adjective “mucilaginous” was invented.

Sausage gravy is so much more than the spackley white glop of our misshapen youth, and today, we plumb its sublimity.

Why you need to learn this

What, I didn’t have you at “spackley white glop”? OK, then, howzabout, besides being delicious and iconically comforting, it’s also one of the easiest things to make ever. And, as if that’s not enough, it’s just as easy to make a huge pile of it as it is to make a couple of servings. Trust me: If your memory’s as good as my elephant’s, you’ll remember this the next time the choir drops in for Sunday brunch and they’ll literally be singing your praises. Literally.

The steps you take

Most of us know sausage and gravy as the more liquid half of that classic breakfast food, biscuits and gravy — the other half I’m guessing I don’t need to tell you? You’ll also find it napped with love across fried chicken, chicken-fried steak or pork chops.

By tradition, sausage gravy is a very simple preparation — pretty much just sausage, a thickening agent and a liquid. Let’s take a moment to examine those ingredients:

First, the most important ingredient: The thickener.

It’s the sausage. Now, what sausage you use is entirely up to you. Most iterations employ the Common American Breakfast Sausage (CABS), a fresh pork number flavored typically with a notable dose of sage.

On the other hand, you, being the soul of intrepidity, might want to set sail for Other Sausage Land and concoct your sausage gravy with something a bit more adventurous. Something like hot Italian sausage or a Cajun andouille. You could even try a (Yipes!) blood sausage like kishka, morcilla or Irish black pudding. Go ahead: It’s your funeral.

If it were up to me — which, as we’ve just established, it’s not — I’d use generic bulk breakfast sausage. If, for some reason, you can’t find bulk sausage — like, say, you live on the planet Zebulorp 7 — purchase uncooked links or patties. Slit the links down the side to remove the sausage from its casing. Then, before cooking — and you can do this with patties as well — crumble the sausage like the Fates did my youthful aspirations. If you’re using a precooked sausage like andouille, simply chop it into bite-size pieces.

Now, about that thickener: Flour is most common, turned into what our Gallic pals call “roux” by cooking it in fat. The fat comes mostly from the sausage, though it never hurts to throw in a bit of butter as well.

Finally, the liquid. Traditionally, sausage gravy uses milk. Now, if you’ve eaten lots of biscuits and gravy, you know that the consistency of the gravy slips often to the far end of the American Standard Glop Scale (ASGS). If I had a nickel for every time I’ve been served a gravy that’s so thick, I could use it to wallpaper my elephant, or my elephant’s bedroom.

That high level of gloppitude stems from the fact that starch thickens milk more than it does liquids like stock or water. Don’t worry about why that is. (The short answer: Science!) Just know that if your gravy is too thick, you have the power to add more liquid and thin it out.

Or, you could be like me (and who doesn’t want that?) and start with stock instead of milk. Not only is it less likely to englopulate, but, because stock has less fat, you’ll get a much lighter end product. (See recipe.) You can still finish it with a splash of cream for richness.

Here’s what you do, to feed four to six people

1. Brown a pound of sausage in a little fat, then remove it from the pan to a clean bowl.

2. Tilt your pan to pool grease on one side. You want roughly a couple ounces of liquid fat. Just eyeball it, and add a little butter if you need or want it.

Next, with the heat on medium, stir about 1/3 cup flour into the fat. This makes the fabled roux. Cook that roux, stirring, for about a minute. Try to avoid letting the roux darken as this should be a light-colored sauce.

3. After a minute of stirring the roux, whisk in 3 to 4 cups of liquid. Turn up the heat and bring it to a boil to thicken, then reduce the heat and let it simmer, 15 to 30 minutes. This allows the flavors of the sausage to seep into the sauce. You could also add some black pepper, maybe more than you think is necessary because this is often a very peppery dish.

4. Taste your sauce. It should be flavorful and delicious, but, again, it depends on the sausage.

If your gravy doesn’t have enough pizzazz, take charge and spruce it up. Sage would be an obvious choice, since it’s already part of most breakfast sausages. But think beyond that: Other fresh herbs or garlic or onion powder would be delicious, or, if you’re feeling absolutely reckless, chile powder or minced chipotle. Get the picture?

You also can add a bit of warm cream here to lighten the color and give it a richer mouthfeel. And finally, make sure you’ve added enough salt.

The whole process should only take about 30 minutes or so. And now you have something beautiful to ladle over your biscuits or your chicken-fried steak. Yum.

1. Warm a skillet over medium high heat. Add oil and swirl to coat bottom of pan. Add sausage; cook until brown, stirring to break it up, about 5 minutes. Transfer sausage to a warm bowl, leaving fat and browned bits in the pan.

3. Raise heat and whisk in chicken broth. When sauce thickens and comes to a boil, stir in cooked sausage and pepper to taste. Reduce heat and simmer, stirring occasionally to prevent sticking, about 20 minutes. Add more broth if sauce becomes too thick.

4. While sauce simmers, heat cream in a separate pan until almost boiling.

5. Stir warm cream into sauce, adjust seasoning, then serve immediately over split biscuits or whole, if you prefer.

2. Grate butter directly into flour mixture and use your hands to incorporate. It will resemble crumbs, but don’t worry if there are a few larger pieces of butter still visible.

3. Add milk or buttermilk; stir with a wooden spoon until it just comes together.

4. Turn dough onto a floured counter; dust with flour. Knead gently by folding the dough in half several times. Don’t overwork the dough or your biscuits will be tough.

5. Press or roll the dough into a 1-inch thick piece, then use a knife or biscuit cutter to cut into 2- to 2 1/2-inch rectangular or round biscuits. If you’re making round biscuits, gather remaining dough and roll out again to make more biscuits. Transfer biscuits to a baking sheet, close but not touching.

A Little Nudge | You're not 'still single'

Dear Abby | Woman not happy with her life at common milestone