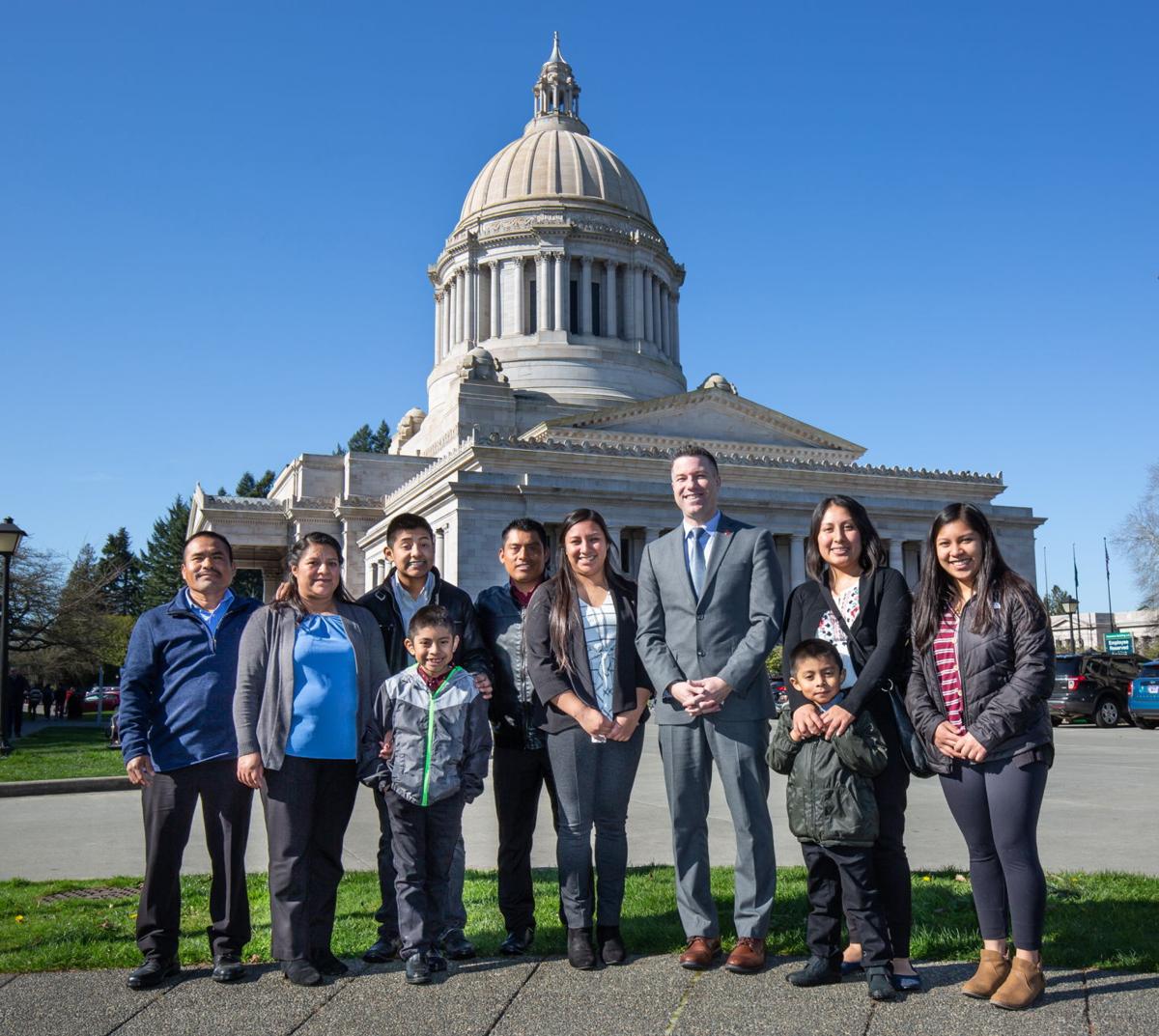 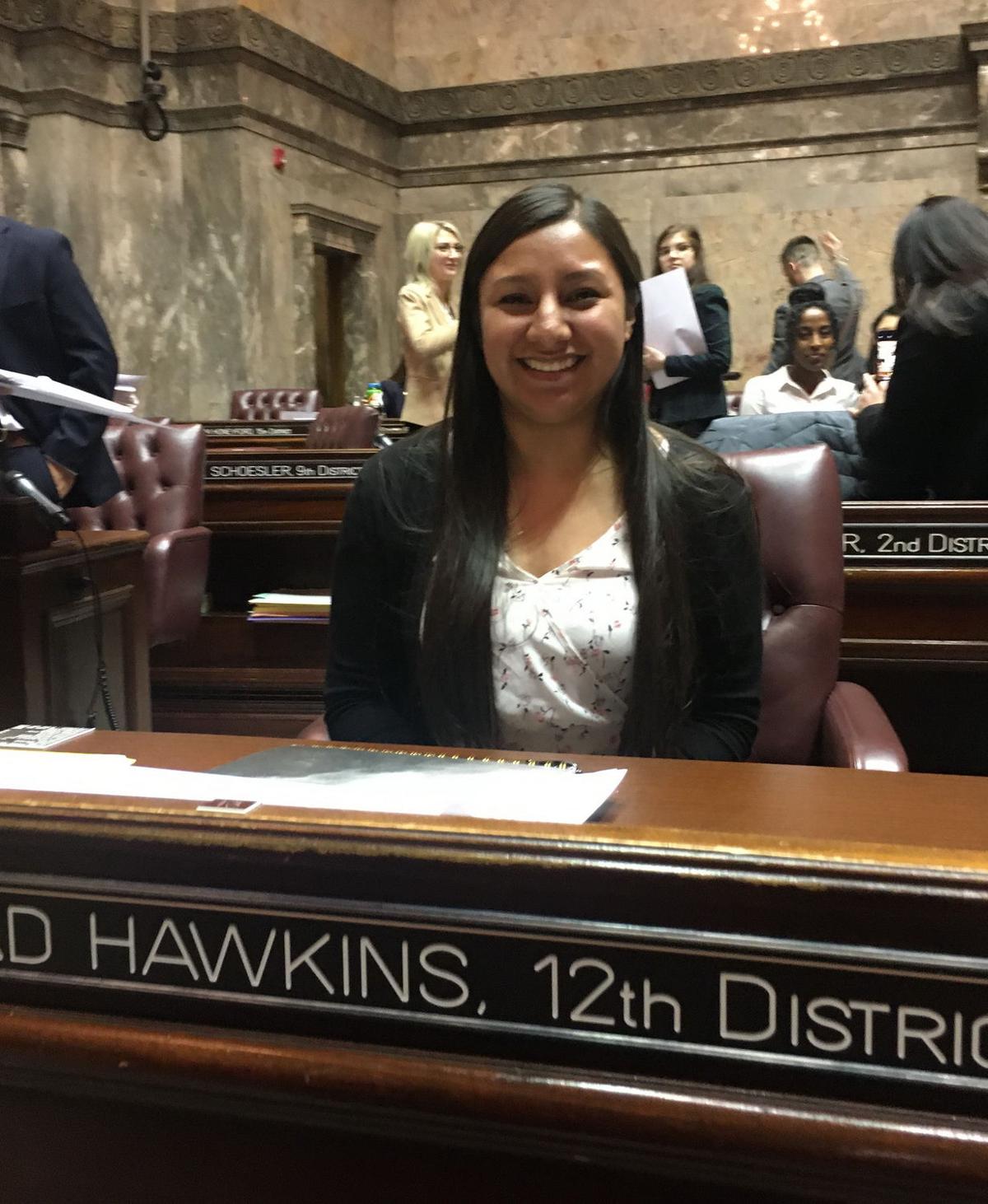 Edith is seen during the mock floor debate at the state Capitol in Olympia.

Edith is seen during the mock floor debate at the state Capitol in Olympia.

LEAVENWORTH — Cascade High School graduate Edith Miguel Santiago will wrap up a pivotal experience this month. For the past two months, she has served as intern for state Sen. Brad Hawkins (R-East Wenatchee).

Edith, a senior at Eastern Washington University, achieved the internship only after a rigorous application process. The first step included letters of recommendation, resumé, transcript and cover letter. “I had two, 30-minute interviews,” she said. “A couple of days later, I took a written exam online, where I wrote a one-page summary of two articles.”

She shared the news of her acceptance right away with her family and close friends. “My parents are very proud of all that I have accomplished, especially being a first-generation student,” Edith said.

Interns need to be able to jump into the work of a legislative office with professionalism and enthusiasm. “The most important skills that I seek in an intern are customer service, kindness and work ethic,” Hawkins explained. “The interns in my office answer many constituent phone calls and emails, and I want our constituents to know how much our office appreciates their feedback about state government. Edith has done an exceptional job in this regard and spends a great deal of time with personal follow-ups to constituents.”

The interns also participate in learning exercises, including being on mock committees and participating in mock debates. Edith admitted, “I do not like talking in front of people, but I was able to give a short speech during the mock floor. During this session, I also spoke with 50-plus constituents for the Latino Legislative Day and students from Soap Lake about my experience.”

To Edith, the reality of state politics debunked the idea of a culture of constant acrimony. “One of the most surprising things about working in the Legislature is seeing all the friendships and camaraderie that both parties have, which is the opposite that we see on social media. Not only that, but there are special events such as Beef Day, Apple Day, Potato Day, Seafood Day and Dairy Day. They are popular and make everyone’s day.”

Interns must be juniors and seniors at a state university. Edith receives credit for her internship toward her major in political science in pre-law. When she graduates from EWU this spring, she will also have two minors, one in Spanish and another in Chicano Studies.

Before heading to law school, Miguel Santiago plans to take a year off. “I will study for the LSAT’s. I also want to gain more experience in the field in any way I can, so I can feel more prepared once I start applying. I have received great advice from many lawyers that work in the Legislature and even the attorney general. I am very grateful for their advice. I am unsure what law field I would want to work in, but I am keeping an open mind.”

Edith’s success stems from her ability to find and connect with mentors. Two years ago, she bumped into a former teacher, CHS English teacher Andrea Brixey, who had taught Miguel Santiago in seventh, 10th and 12th grades. Edith talked intently about her favorite college classes. Brixey told her she’d make a great lawyer. “After our conversation Mrs. Brixey took out a little purple card and wrote ‘Law,’ underlining it twice,” recalled Edith. “She told me it would give me luck. Two months later, I decided to change my major from social work to political science in pre-law. I still have that little card in my wallet, and it reminds me about that conversation every day.”

Brixey said the conversation was transformative for her, as well. She learned Edith was reading a lot of Latinx authors at college. “Edith is a deeply polite human being,” Brixey said. “She looked me straight in the eye and told me, ‘I didn’t know about these books, Mrs. Brixey.’”

Subsequently, Brixey was accredited to teach the first-ever Chicano Studies class at CHS, which has an enrollment of 32 students.

Marlene Farrell is a freelance writer who writes features for the Cascade School District.