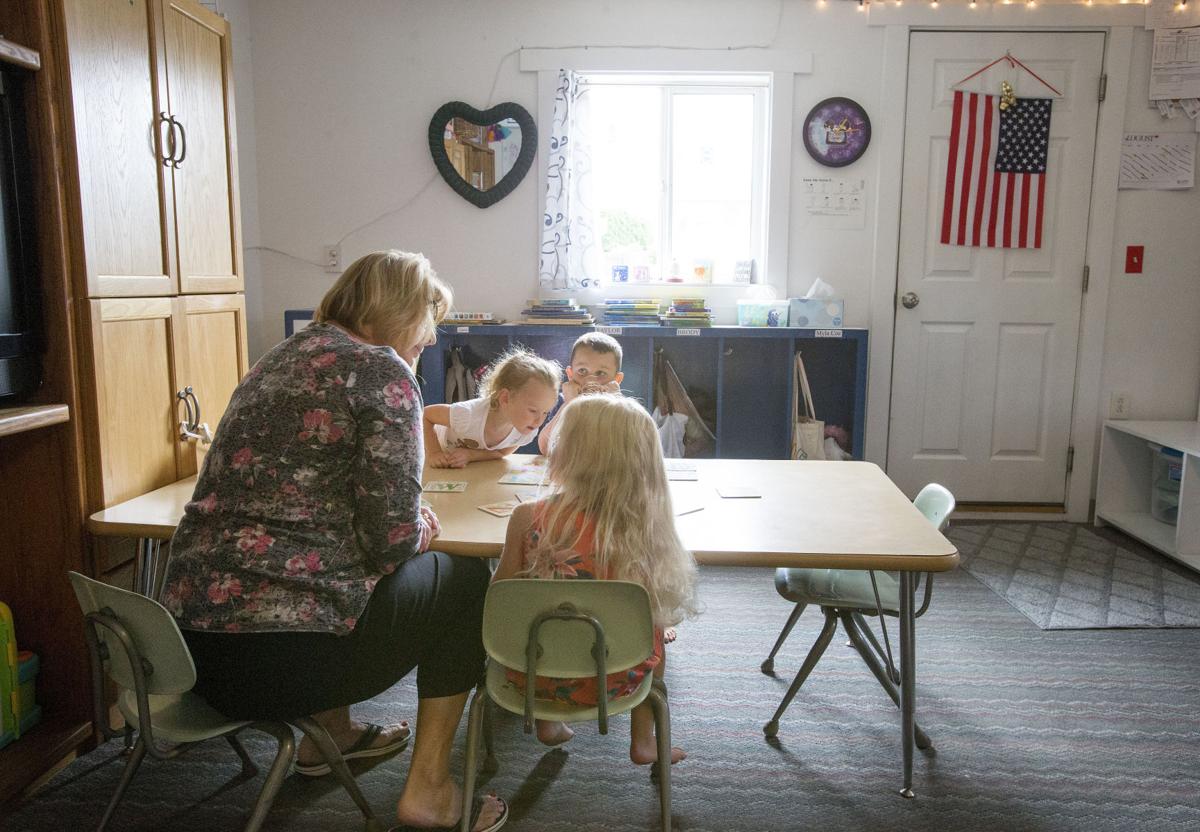 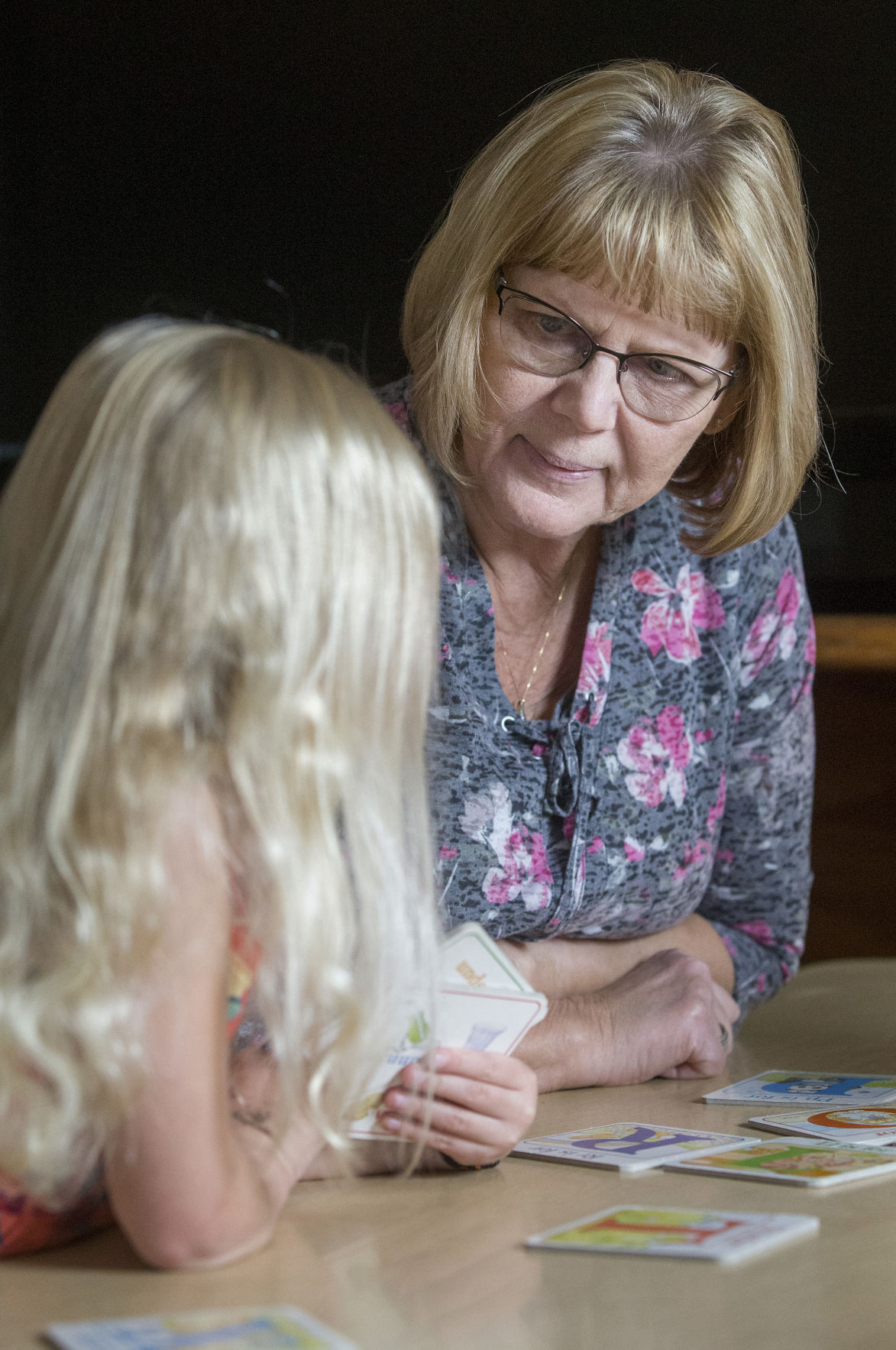 Carolyn Hall-Marlin talks with Myla Coe, 4, as she goes over the alphabet. 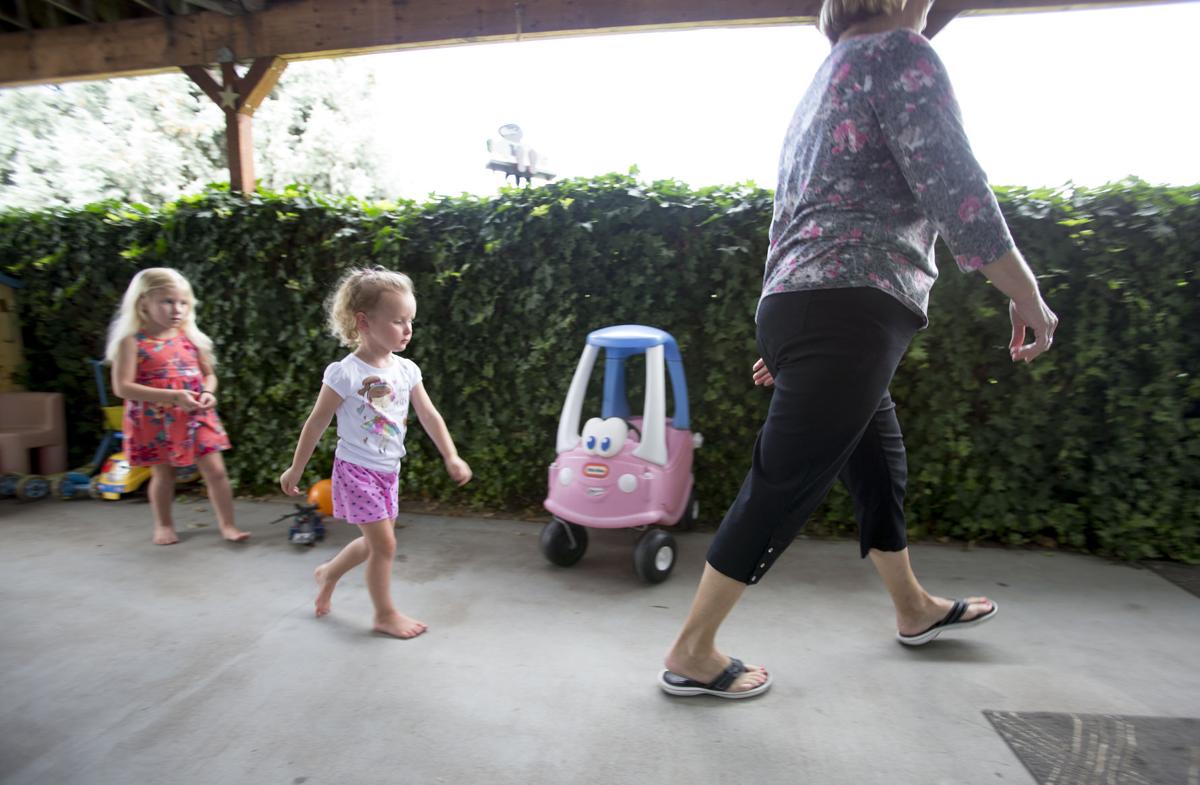 Myla Coe, 4, and Charlie Hampton, 3, follow Carolyn Hall-Marlin to pick up toys in Martin’s backyard on her last day of operating a daycare at her East Wenatchee home on Aug. 29. 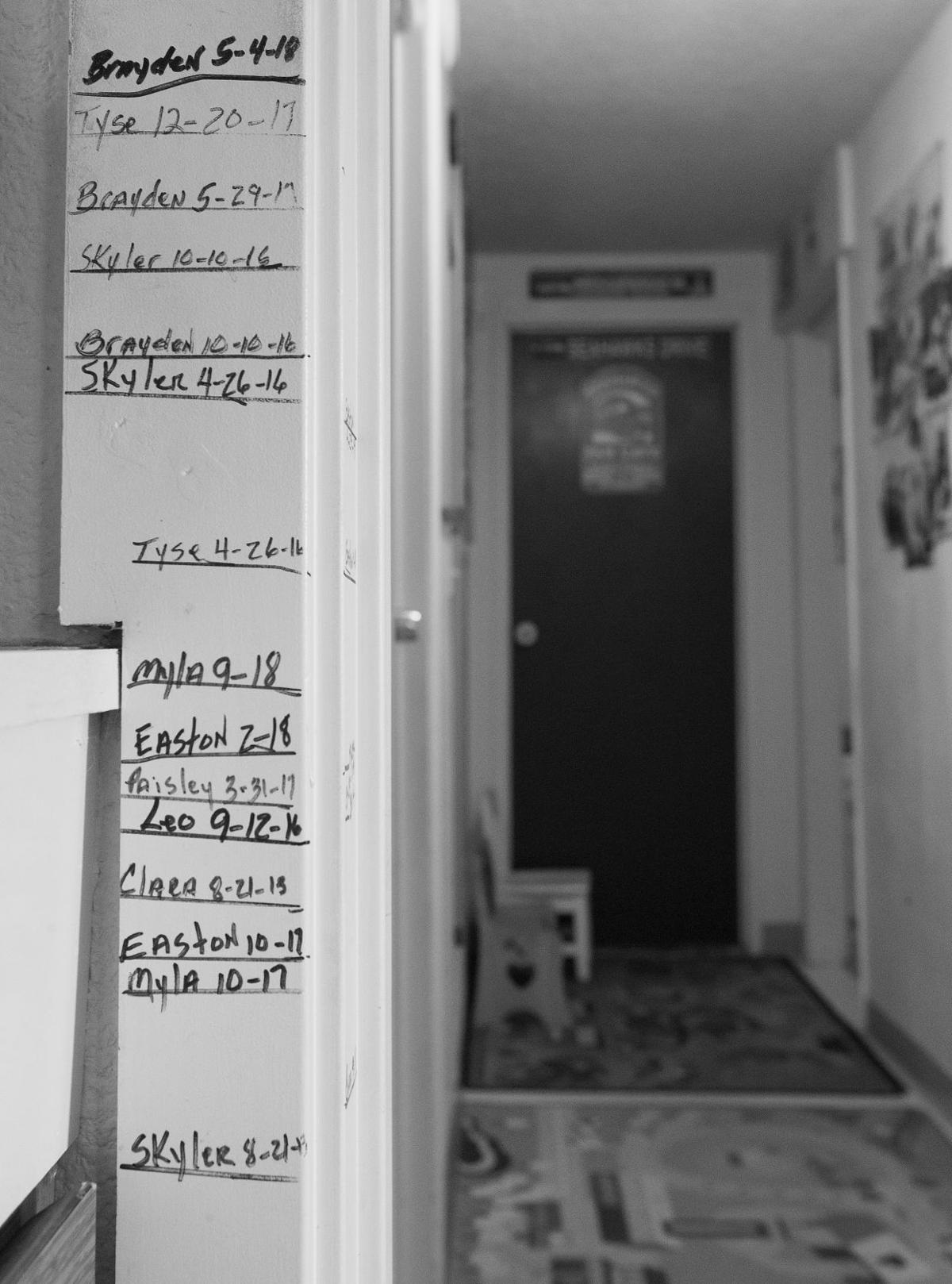 Over the years of her home daycare’s operation, Carolyn Hall-Marlin has recorded her students’ heights on a wall in her home.

Carolyn Hall-Marlin talks with Myla Coe, 4, as she goes over the alphabet.

Myla Coe, 4, and Charlie Hampton, 3, follow Carolyn Hall-Marlin to pick up toys in Martin’s backyard on her last day of operating a daycare at her East Wenatchee home on Aug. 29.

Over the years of her home daycare’s operation, Carolyn Hall-Marlin has recorded her students’ heights on a wall in her home.

EAST WENATCHEE — Carolyn Hall-Marlin’s daycare in the basement of her house in East Wenatchee is filled with memories.

The heights of dozens of children are inscribed on a door frame and one of her walls has been turned into a mural of graduation announcements and photos of smiling young adults. It was Hall-Marlin’s last day in operation, though, on Aug. 29. She is closing up shop after 21 years, because she doesn’t feel she can complete new requirements for daycare operators made by the state Department of Children, Youth and Families.

Hall-Marlin tears up as she talks about closing her daycare. She still gets invited to birthday parties and soccer games for kids who have long since left her care.

“I would go to all their birthday parties of kids that are in high school now,” she said. “They still call and invite papa and I to all this stuff. So, it is not just making money, I’m kind of part of their family.”

A new set of daycare regulations went into effect across the state on Aug. 1 and affect 168 daycares registered with the state in Chelan and Douglas counties that provide for 2,688 children. Most of the changes simplified existing rules, said Debra Johnson, a spokeswoman for the state Department of Children, Youth and Families.

The regulations also require daycare operators, or directors, to obtain 47 college credits focused on early childhood learning by Aug. 1, 2024, according to state Department of Children, Youth and Families’ documents. Everyone else working inside a daycare must receive at least 12 college credits.

Dozens of daycare workers protested outside the state Department of Social and Health Services building in Wenatchee Aug. 1 saying the regulations were too strenuous. The daycare operators said that many would likely have to close because of the new rules.

On Aug. 22, Department of Children, Youth and Families Secretary Ross Hunter walked back those requirements a bit. A letter to Gov. Jay Inslee let daycare operators with at least seven years of experience take a competency test instead of enrolling in college courses.

But it is too little, too late, Hall-Marlin said. She’s already closing her doors and eight children have had to find new daycare centers.

It doesn’t make sense for daycare centers to have all these education requirements, she said. Pre-schools exist to make kids ready to enter kindergarten, but daycares should just be about watching kids and letting them play.

“My biggest thing is they need to be kids,” Hall-Marlin said. “They get school from kindergarten through college. At what point in time do they just get to be kids?”

The result of the new requirements will be an increase in cost and the creation of illegal daycares, she said. Former clients are already telling her their new daycare centers are increasing rates.

Parents should also have the right to say how their children are cared for, she said. The state regulations are pretty extensive, including a requirement to put 9 inches of bark, 9 inches of pea gravel or 6 inches of recycled rubber under play structures.

“I think they’re taking the parents’ rights away from them,” Hall-Marlin said. “You don’t have the right to tell your daycare how you want them to care for your child. The state does all that for you.”

The purpose of the changes is to increase the quality of childcare in the state and provide every child with equal access to early childhood education, Johnson said.

“Do we only want individuals with a certain level of wealth to have their children prepared going into kindergarten?” she asked. “No, we want them to have equity across the system.”

The agency has heard that the changes are causing some daycares to close, but in some cases when child care centers close others are opening, Johnson said.

The agency is also attempting to offset any expenses by providing scholarships for additional education to daycare operators, she said.

Some scholarships are now available, but the state Legislature hasn’t fully funded the agency’s request for scholarship funding, Johnson said.

Part of requiring additional education is so childcare providers can receive a livable wage, she said.

“We need to have a workforce that can provide the level of pay, a livable wage,” Johnson said. “That is one of the things we struggle with is (working in a daycare) does not pay a lot.”

As for the potential of illegal daycares being created, the agency does have a program called Family, Friend and Neighbor Care, she said. The program allows family members, friends or neighbors to take care of children, but some regulations, licensing requirements and oversight may apply.

What people need to realize is that the term daycare doesn’t mean what it used to, she said. Children need more help to be prepared for when they enter kindergarten.

“A childcare center isn’t about babysitting a child, but preparing a child to be equipped to enter kindergarten,” Johnson said. “If we want to have quality childcare then what we need to do is to have a workforce that can deliver on that level of quality childcare. It isn’t about leaving your child all day at a center just to be watched.”

Correction: This story contained incorrect information provided by the state agency. People must obtain a license and be regulated if providing child care to a group of children under the age of 12. The only exceptions are blood relatives, stepfathers, stepmothers, stepbrothers and stepsisters, legally adopted parents or legal guardians. Friends and neighbors can monitor children for periods of less than 24 hours, as long as it is not on a regularly scheduled basis and not as a business. In addition, people who are not relatives participating in the Family, Friend and Neighbor Care program must obtain health and safety training, first aid, CPR and safe sleep training for infants, within 90 days of being approved by the state Department of Children, Youth and Families, to care for a child. Also they must receive a technical assistance visit within a year of becoming a provider.

In addition, people who are not relatives participating in the Family, Friend and Neighbor Care program must obtain health and safety training, first aid, CPR and safe sleep training for infants, within 90 days of being approved by the state Department of Children, Youth and Families, to care for a child. Also they must receive a technical assistance visit within a year of becoming a provider.

On Aug. 1, dozens of daycare operators protested the new regulations created by the state Department of Children, Youth and Families.

Many of the operators were Hispanic and said the agency hadn't done enough to translate regulations into Spanish.

The agency also didn't provide enough classes in Spanish for daycare operators and the individuals providing the translations did not seem qualified to be doing so, the protestors said.

It also provides all of its materials and regulations in English, Spanish and Somali, she said.

Asked for an example of the new daycare regulations in Spanish, Johnson advised the reporter use Google Translate on the agency's website.

33 transportation fees and taxes on the menu in state Legislature

The deepening economic divide: How the pandemic has hurt small businesses

The relatively wet winter whipped Washington's snowpack back into shape