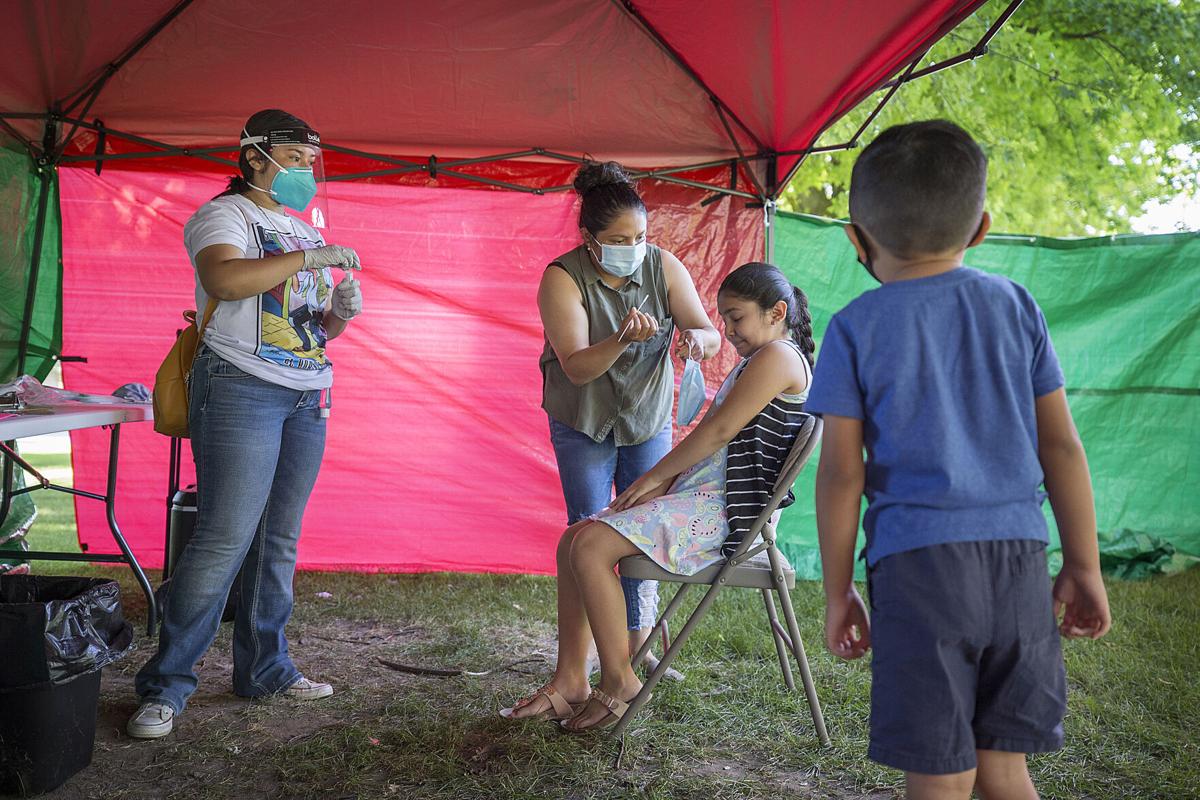 Yesenia Campos helps her daughter Itzhel, 10, collect a COVID-19 test sample while her son Axel, 5, waits his turn at the Bridgeport testing center at Fireman Park on  Thursday. At left helping is volunteer Alpha Espino, also from Bridgeport. The Campos family said they found out about the test of the entire town when a volunteer came to their home to inform them earlier in the week. They hadn't been tested before. 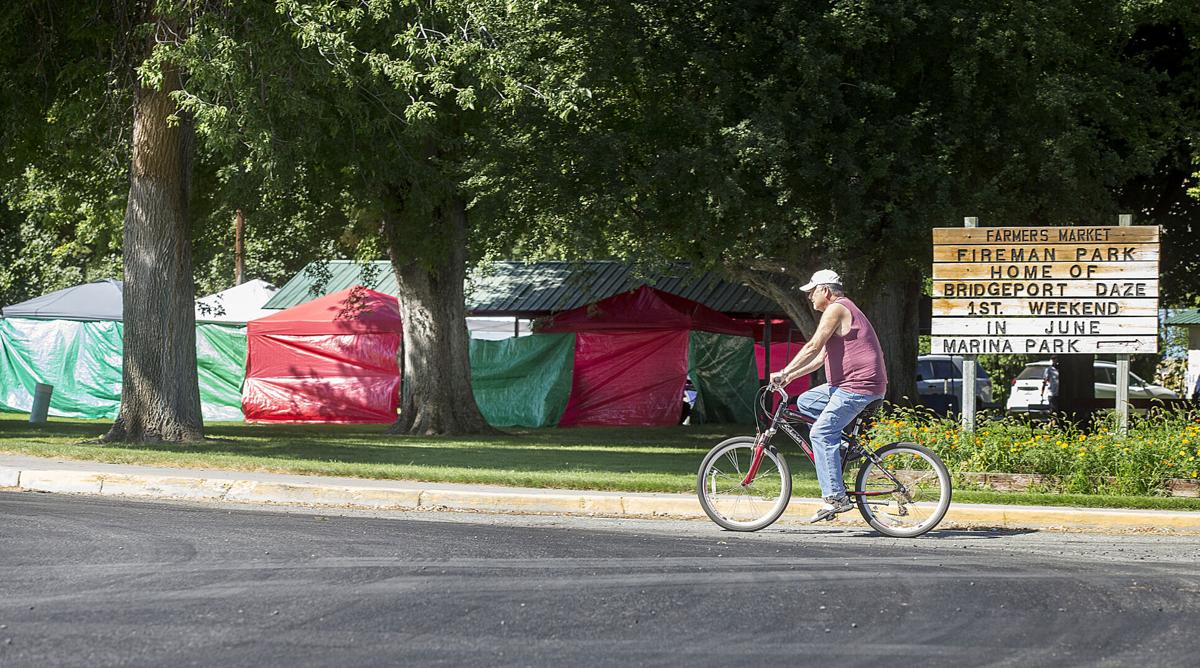 Tents were put up at Fireman Park in Bridgeport this week to test the community of 2,500 for COVID-19. 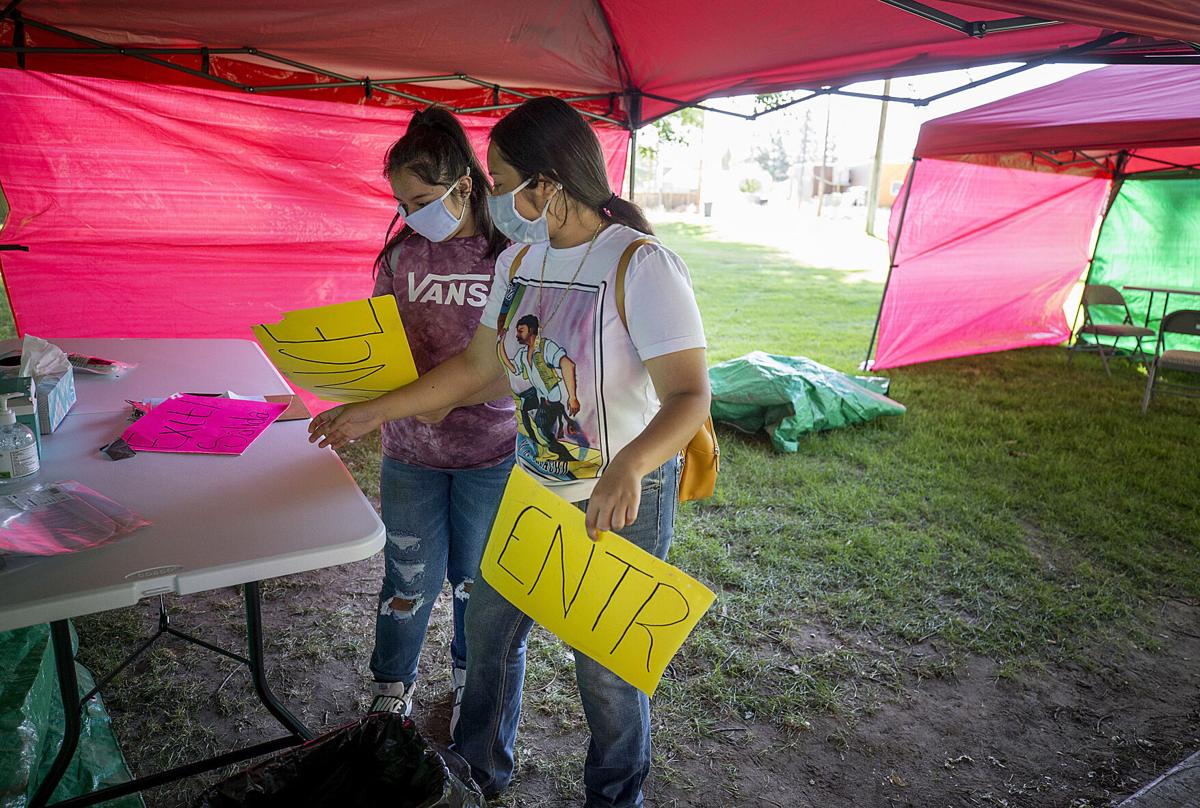 Bridgeport volunteers Omega Espino, left, and her sister Alpha hang up signs before the remote COVID-19 testing site opens on Thursday at Fireman Park. They said they learned about the opportunity to volunteer from their aunt who works for the Chelan-Douglas Health District.

Yesenia Campos helps her daughter Itzhel, 10, collect a COVID-19 test sample while her son Axel, 5, waits his turn at the Bridgeport testing center at Fireman Park on  Thursday. At left helping is volunteer Alpha Espino, also from Bridgeport. The Campos family said they found out about the test of the entire town when a volunteer came to their home to inform them earlier in the week. They hadn't been tested before.

Tents were put up at Fireman Park in Bridgeport this week to test the community of 2,500 for COVID-19.

Bridgeport volunteers Omega Espino, left, and her sister Alpha hang up signs before the remote COVID-19 testing site opens on Thursday at Fireman Park. They said they learned about the opportunity to volunteer from their aunt who works for the Chelan-Douglas Health District.

BRIDGEPORT — In the middle of a quiet city park, a group of people set up green and red tents. Residents of the town passed the tents and eyed them with wary expressions.

The tents were meant to give people a sense of privacy during the voluntary testing for COVID-19, said Rachel Noll, Incident Command Team spokesperson. The Chelan-Douglas Health District asked for the incident command team, because they needed the assistance, Noll said.

It was all a part of an effort to test the entire town of Bridgeport, population about 2,500, for the virus, said Charlotte Headley, Incident Management Team commander. People could refuse to get tested, but the Incident Management Team along with the Chelan-Douglas Health District provided free tests Tuesday, Wednesday and Thursday at Firemen Park. The organizers, along with volunteers, also went door-to-door in Bridgeport offering testing. The testing was all self-administered.

The reason for the mass testing is because earlier testing efforts — that included 32 people — indicated an infection rate of about 30% in the community, Noll said.

“Out of care and concern for the community, an effort is being made to ensure that any community member who wishes to be tested for COVID-19 will have the opportunity to do so,” Noll said.

Chelan-Douglas Health District staff are looking at providing this type of testing for other communities with similar infection rates in the future, she said.

The testing is appreciated, because it may give people an opportunity to get back to work, said Carlos E. Herniquez. Herniquez is the owner of Heavenly Coffee and the pastor of the Wellspring of Life Church. The biggest impact to people in Bridgeport has been financial as people with symptoms will decide to stay home, unsure of whether they are sick.

“Many people are scared to take the test and many people haven’t had the finances to pay for (a test),” Herniquez said. “They don’t have insurance and so they decide to just stay home.”

It’s also impacted him financially as he purchased the coffee shop he is running only five months ago at the beginning of the pandemic, he said.

He is recommending that people get tested in his community, whether they feel sick or not, Henriquez said. He’ll also be getting tested.

“Because I don’t want to be like, ‘No I’m fine,’ and things like,” he said. “Some people, they don’t feel the symptoms.”

Devin Worsham was one of the Bridgeport residents who helped the health district and incident command team provide the testing. Worsham lives mostly in Eugene, Oregon, but grew up in the area and has been back to help her dad.

Her father manages a farm and an orchard, but fractured his femur three months ago, Worsham said. He wasn’t able to get surgery, because of the COVID-19 restrictions hospitals instituted.

“They wouldn’t do surgery because of that, not until it moved into like phase three,” she said. “And then here we are three months later and he had a heart attack in between that so he’s lucky to be alive.”

Her father’s medical challenges on top of a disappointing cherry crop this year convinced the family it was time to sell the farm, Worsham said.

She decided that since she’s in Bridgeport helping her father, she might as well take the opportunity to volunteer as well, she said.

“Even though I’m helping my dad there was still something missing here and I wasn’t feeling effective,” Worsham said. “So I thought (volunteering) at least I’d get out, learn something, meet people and also you learn something from people.”

At the end of the day, the purpose of this testing is to show people of the Bridgeport community that people are concerned about their well-being and want to help, Commander Heady said.

“There’s been an immense effort and an immense level of care and concern for the Chelan and Douglas counties’ residents,” Headley said. “And we want to put something in place that would protect and help resolve some of the positive cases.”

What is an Incident Management Team?

The Incident Command Team responding to the pandemic in Chelan and Douglas counties also assisted during the Oso Mudslide, the Kilauea eruption and to hurricanes in Florida.

Charlotte Heady is the commander of the Type 3 Incident Command Team that is providing assistance to the Chelan-Douglas Health District during the COVID-19 pandemic, Headley said.

Her day job is chief of security for the state Department of Corrections, she said.

The biggest thing an incident command team does is provide support and assistance to local agencies that are worn out from handling a crisis, she said.

“For instance Chelan and Douglas counties have been doing an excellent job, but the folks that have been managing this haven’t had a day off in five months,” Headley said. “And so they’re exhausted and they’re tired.”

A type three incident management team is the smallest type in existence, she said. The teams receive training through the Federal Emergency Management Agency and it consists of a select group of people with very specific roles including:

It’s a way to organize a response to a crisis, she said.

“It’s just really an amazing way to reach out to different communities who are in crisis and be a part of the solution,” Headley said.

Free COVID-19 testing to be offered in Cashmere

Pierce County team to aid against coronavirus in NCW

Local farms forced to reassess or shut down after updated agritourism guidelines for Phase 1.5 counties