Ben Madson, Wenatchee, competes in the 200 freestyle at the Apple Capital Swim Meet in Wenatchee last May.

Naomi Lambert, Wenatchee, competes in the butterfly event at the Apple Capital Swim Meet in Wenatchee on May 31, 2019. 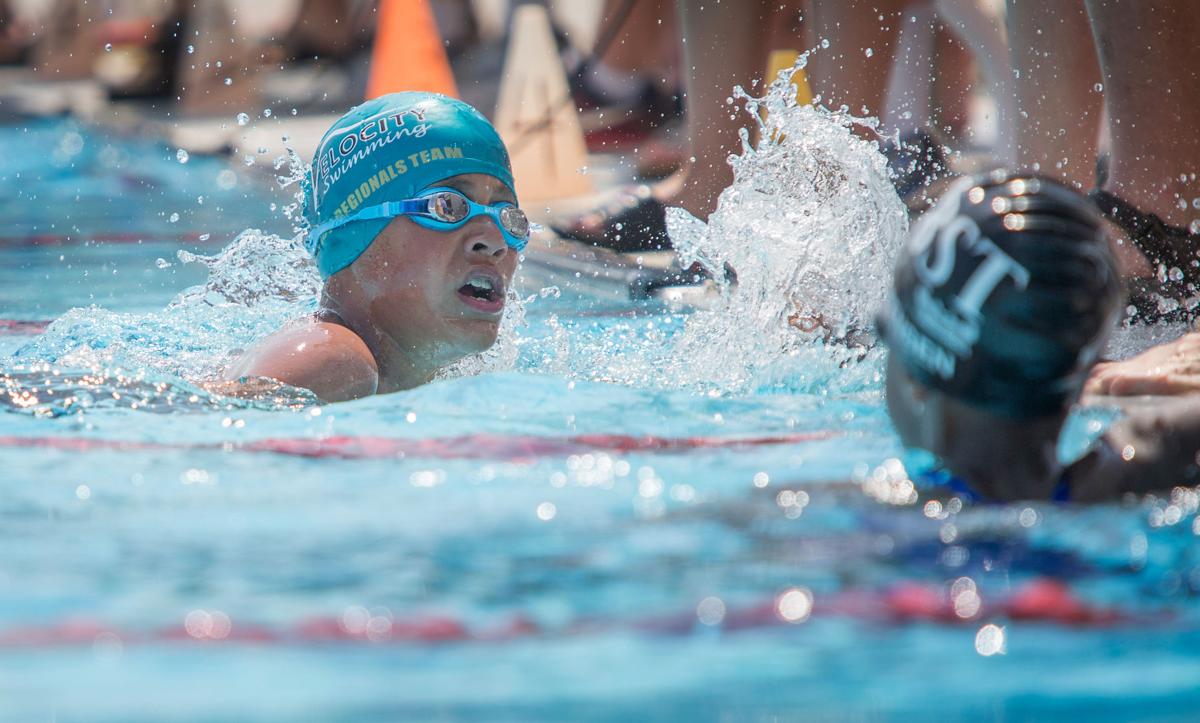 Aiden Grigsby, Wenatchee, checks out who finished with him in the 200 freestyle at the Apple Capital Swim Meet in Wenatchee on May 31, 2019.

WENATCHEE — The closure of the Wenatchee City Pool this week has essentially canceled the summer swim season for the Velocity Swimming Club. The city pool is Velocity’s main pool for practice and meets.

That also means the cancellation of the two big meets — the Apple Capital and Starlight — held at the pool every season.

Velocity Swimming Head Coach Mike Hartley said the club is in total agreement with the city on the closure of the pool. The city decided this week to cancel to pool season due to the COVID-19 pandemic.

“Velocity understands the city has to make the best decision for the health and safety of the community so we support that. The impact for us is pretty major because we now can’t train for whatever meet there might be,” Hartley said. “Inland Empire Swimming is still possibly going to have an IES championships meet. It would be difficult for us to train for that if we could train at all. We’re basically a team without a pool.”

The city did everything it could, Hartley said. Velocity Swimming has been in contact with pool officials, consulting on what things might happen should the pool open, like implementing special tactics to keep swimmers six-feet apart, he said.

“When it came down to it, the city had to make the right decision. I think they did make the right call considering the situation. It is an extremely difficult thing for the kids,” Hartley said.

The team is currently reviewing options for having dryland-only types of workouts. The goal is to keep the kids engaged. Not having a pool is a “pretty serious” blow, he said.

Even without the two big meets, Hartley said the club’s financials are strong. Team officials had been thinking about a contingency plan should the pool close for the summer. Hartley said they will be able to weather this storm.

Unfortunately, Hartley said the kids have been getting used to cancellations this summer. The IES has a series of meets all over the state during summer, but those have been canceled.

“From the kid’s perspective, they would love to swim but all the meets are gone,” he said. “The kids miss their friends and want to swim but they are used to the cancellations and bad news which seems to be coming every few weeks. The kids were at least partly anticipating that this could happen. They were bracing themselves for the possibility.”

“Because all the meets have been canceled thought the IES long course season, our seniors who are heading off to college, wanted to use this to train,” Hartley said. “We also have college students who come back into town, who are currently swimming in college, who are using it for their next season. Now they don’t have a pool to swim in. Our college athletes and our seniors are hit pretty hard by this.”

Summer season is important, he said, because kids can focus on their swimming without having to worry about school and other things. This takes away a huge part of their summer swimming experience, Hartley pointed out.

It is much the same at public pools all around the state, he said. Cashmere and Ephrata have closed their pools.

“The summer league is really big deal around here, with teams from various towns,” he said. “That league was canceled. The WRAC has a summer league. They use the city pool for their championship meet. They had to cancel that.”

The focus moving forward, Hartley said, is hoping Wenatchee High School can reopen its pool in the fall. He said there is still a chance the fall high school swim season could be affected.

The girls’ high school swim season is in the fall.

“The WIAA has been looking at creating solutions for that. They are trying to get creative. We also use the Eastmont pool. We’re hoping both pools open on time. There is a chance that won’t happen,” Hartley said. “Velocity Swimming is not traveling to meets, even if they have them, because we’re being as cautious as we can. We don’t want to take unnecessary risks.”