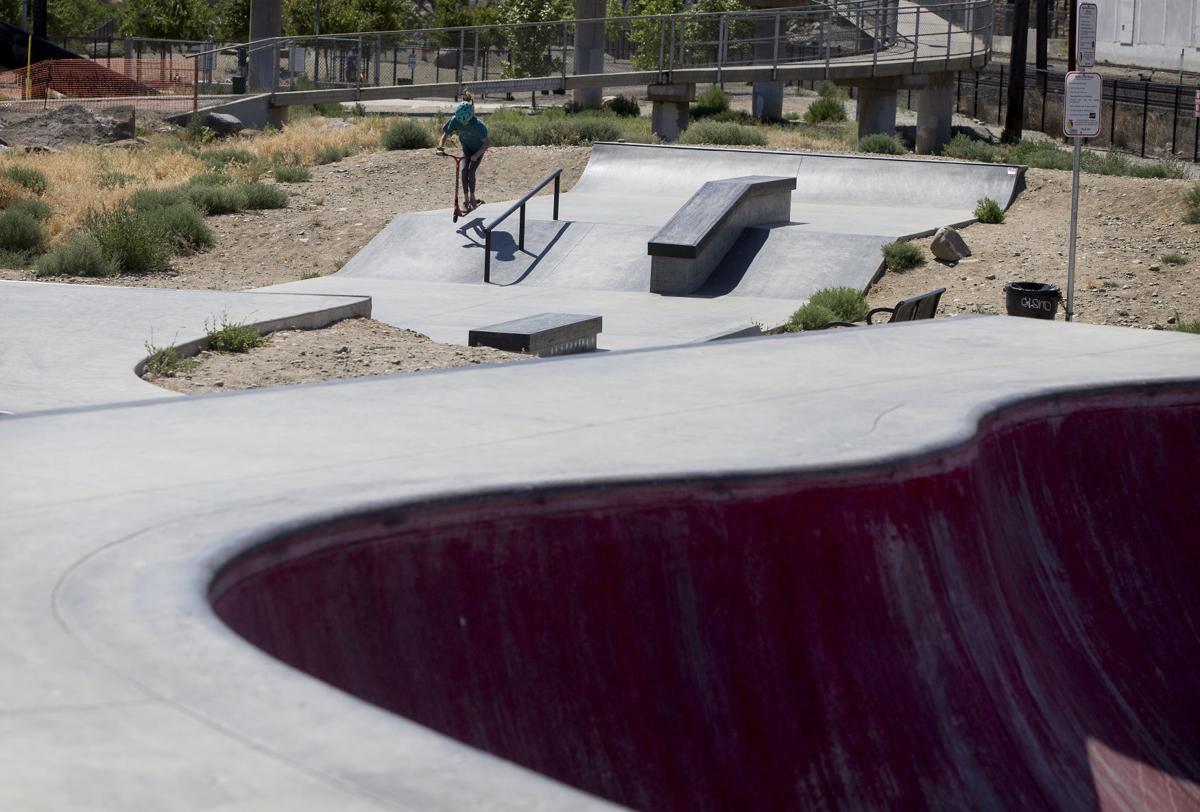 Sophia Johnson, 12, Wenatchee, jumps her scooter on the Hale Park skateboard park on July 7. The skate park has been open all spring even though the skate park at Pioneer Park has been fenced off and closed. 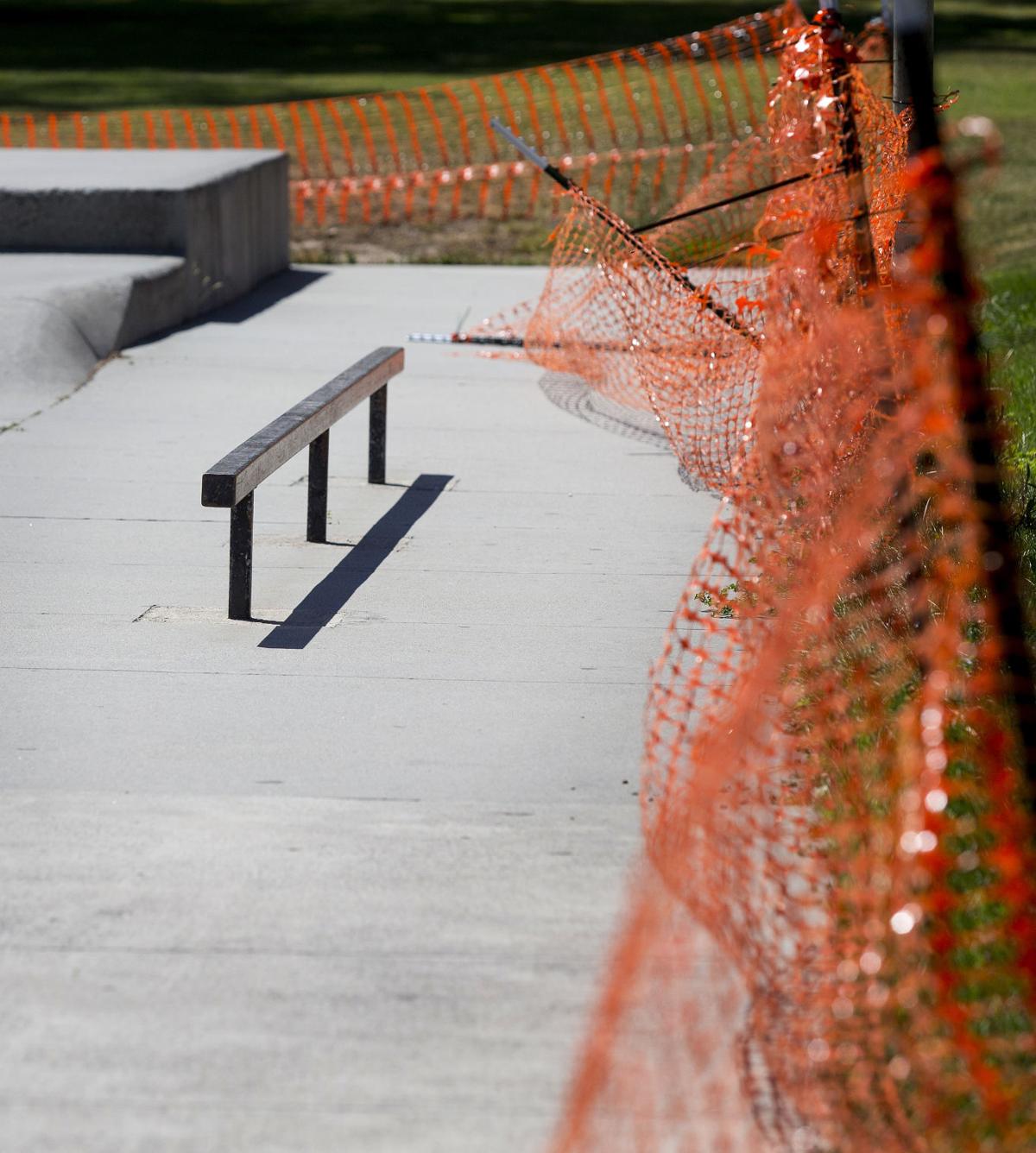 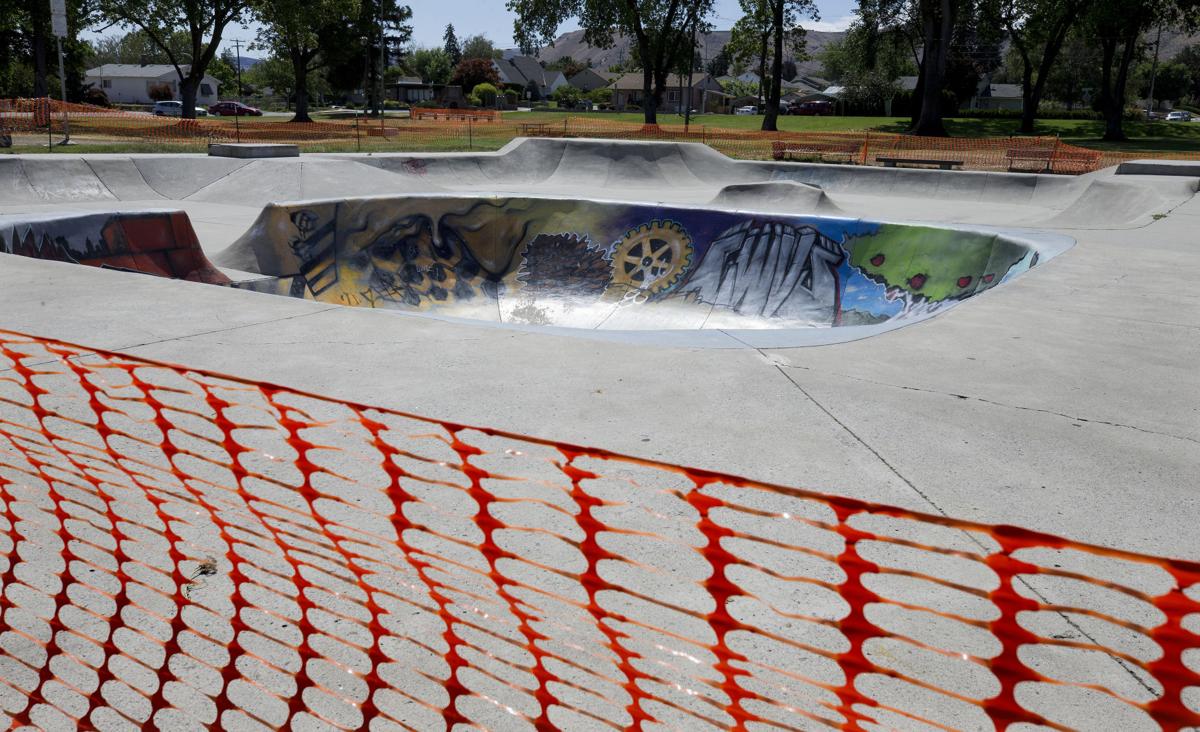 Sophia Johnson, 12, Wenatchee, jumps her scooter on the Hale Park skateboard park on July 7. The skate park has been open all spring even though the skate park at Pioneer Park has been fenced off and closed.

WENATCHEE — On a hot July afternoon at John Simpson Memorial Park in Cashmere, Ricky Gonzalez and his 1-year-old son Alonzo sat under a shade tree at the edge of the park, enjoying some fresh air. On the playground, a babysitter pushed a young kid on a swing with one hand, cradling a baby with the other. A group of young kids, hunched over a picnic table, laughed and looked at their phones.

“Today would be the most crowded that I’ve seen,” Gonzalez said, referring to the number of people at the park.

In Wenatchee, though, playgrounds are empty and barricaded with orange fencing. Some parks, like Wenatchee Confluence State Park, include signs that read, “Playground equipment closed. Be safe — Use social distancing.”

Under COVID-19 restrictions, most public playgrounds and parks were closed for public health precautions. With new Safe Start phases and summer weather, some are re-opening, but some remain fenced off to the public. Even though both Chelan and Douglas counties are in modified Phase 1, different cities and park management services have varying approaches to reopening playgrounds.

“It’s kind of confusing, even in the state rules,” said Cashmere Mayor Jim Fletcher. “Once we got to the stage where they allowed outdoor recreation to be open, playgrounds and parks are part of our recreation, so that was kind of our justification.”

“People kind of ripped [fencing] down, and we had signs and those were taken down also,” Brawley said. “What we have up there right now is, ‘Use this playground at your own risk.’”

Cities have taken their own approach to Gov. Jay Inslee’s Stay Safe, Stay Healthy plan regarding recreation. Under modified Phase 1, outdoor recreation involving five or fewer people outside a household is allowed with social distancing. Some officials have used this rule to justify reopening playgrounds, such as Cashmere, while others are holding off reopening until later phases.

“The main reason that we closed them is for safety,” said Ryan Baker, parks manager at Chelan County PUD. “It’s not a popular approach, love to have them open for all the kids and adults for that matter, but unfortunately they’re closed.”

Coronavirus can be spread by people touching surfaces or objects with the virus and then touching their face, but surface contact is not the main way the virus spreads, according to the Centers for Disease Control and Prevention (CDC). For playgrounds to reopen, the CDC recommends taking safety precautions such as wearing masks, practicing social distancing and sanitizing hands to help reduce the transmission of the virus. They also advise that equipment be cleaned regularly, which can be difficult to monitor on open-use playgrounds.

At the beginning of March, Chelan PUD tried to sanitize equipment daily, but proper sanitation could take two employees upwards of four hours to complete one park, according to Baker.

“We learned very quickly we don’t have enough staff to comply with the new safety standards,” Baker said.

The case-by-case playground rules have also spurred confusion and criticism from Chelan and Douglas county residents.

“School’s out, it’s time for the school district to remove the fences keeping children off the playground equipment,” said NABUR member Kris M. “Not everyone is blessed with a yard and keeping public grounds closed-up forces overcrowding in areas that are open.”

Parks or gathering areas with denser populations tend to argue that playgrounds pose too much of a risk to reopen. This was the logic behind closing playgrounds under Chelan PUD jurisdiction, which can see upwards of 50 children playing at a time, according to Baker.

“We do regular inspections and keep a pretty close eye on our playgrounds,” Baker said. “That’s one of the real kickers between Phase 3 and Phase 4 is how many people.”

The CDC also noted that physical activity and open space can help relieve stress and provide health benefits. Outdoor playgrounds do have the benefit of fresh air, which can help dilute the virus.

“Part of the reason was kids wanting to be out and play,” said Fletcher. “It’s a reasonably safe place to be, but hopefully when you are out in public you are also taking personal responsibility and when your kids are done playing you wipe your hands.”

Yet taking the kids to the playgrounds still comes with its own risk.

“I’m not too worried about it, but I feel like being clean and taking extra precaution are important,” Gonzalez said. “I feel like it would just be the norm to put Germ-X on your hands after being outside.”

This article comes from NABUR, an online discussion forum for the North Central Washington community. You can join our conversation about the arts (or discuss any other topic) by visiting wwrld.us/NABUR.

Eastmont Lanes in trouble as it faces extended shutdown

Online school start will still be based in the classroom