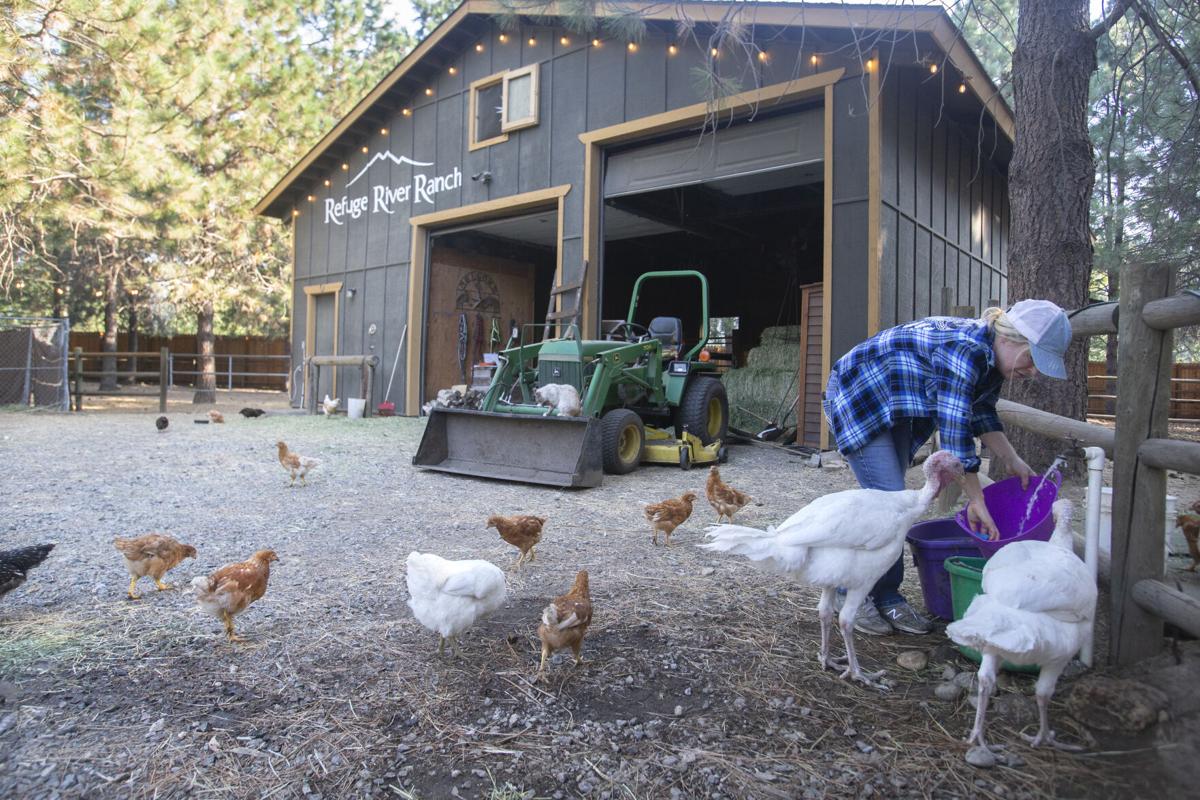 Jodiek Pratt draws a crowd of hungry poultry as she cleans out water buckets at Refuge River Ranch at 8200 East Leavenworth Road in Leavenworth on Friday. Pratt, who owns the ranch, said that she has lost most of the income from the property because ranch experience tours are banned under state pandemic rules for agritourism. 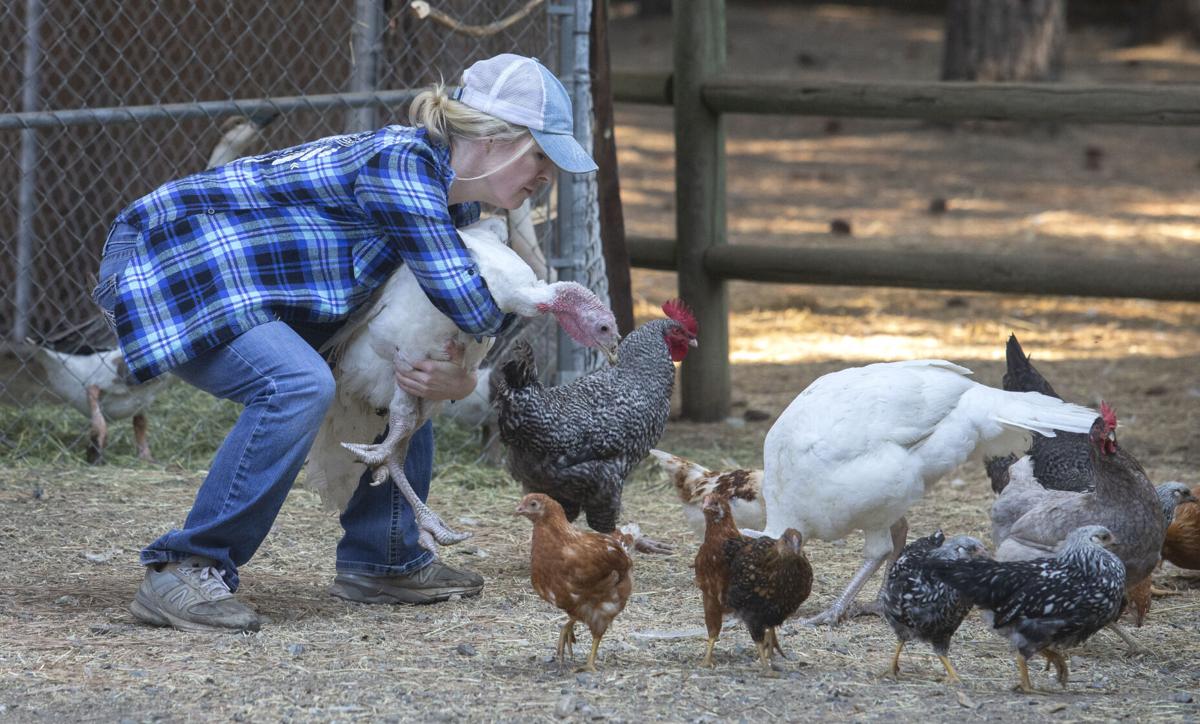 Jodiek Pratt carries Gump, a rescued turkey with weak legs, to feed along with other poultry at her Refuge River Ranch in Leavenworth. 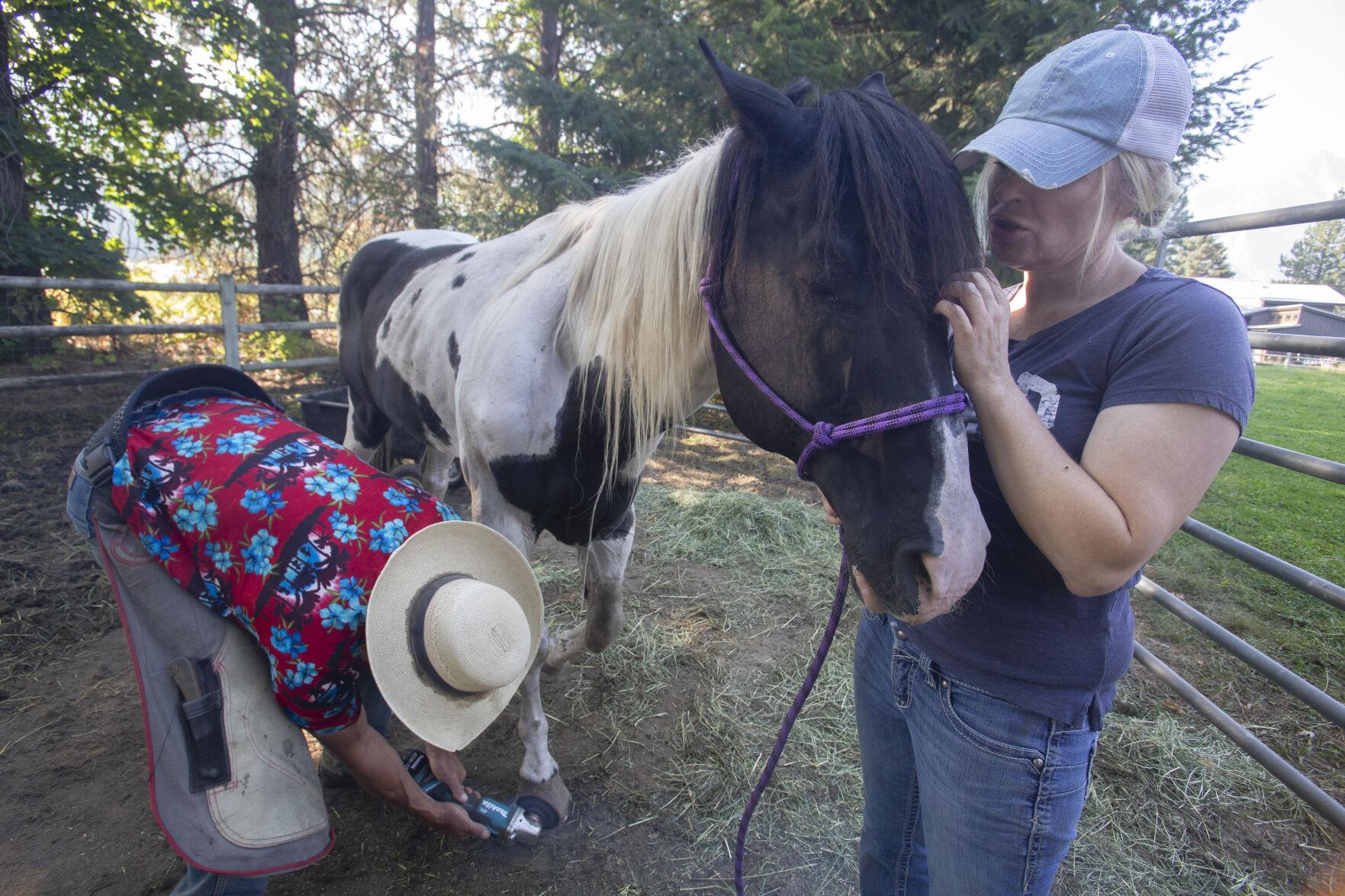 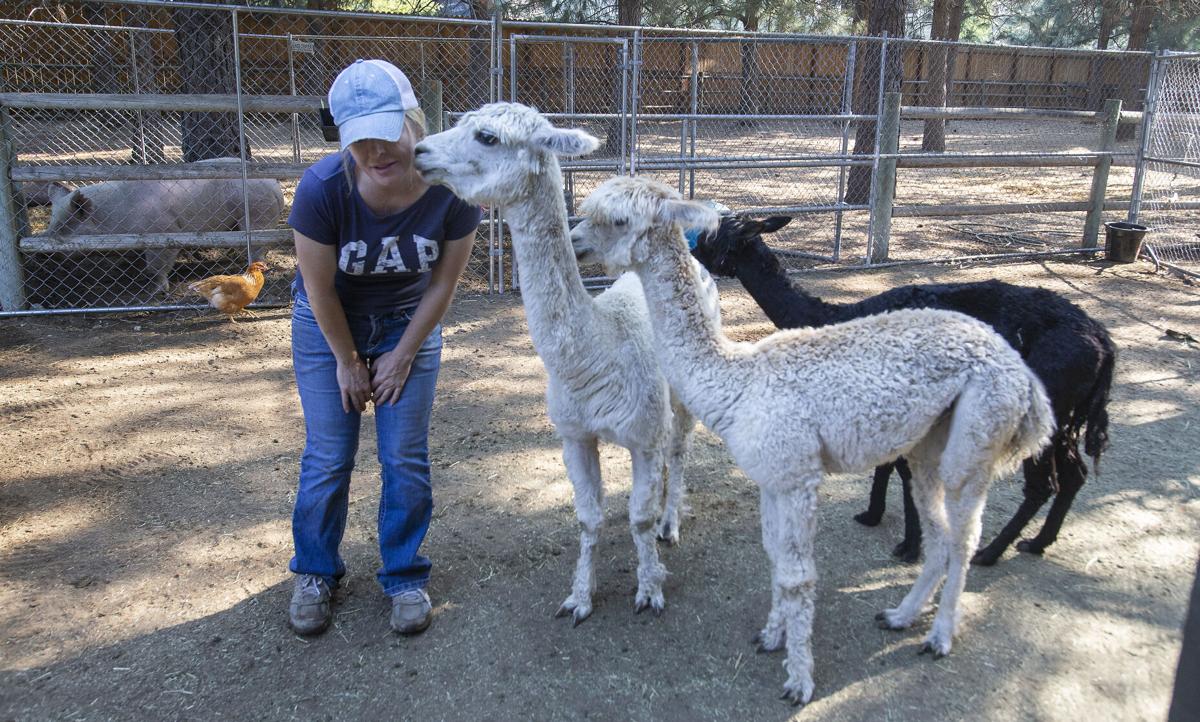 Jodiek Pratt gets a kiss from one of her alpacas.

We have lifted the paywall on this story. To support essential reporting, please consider becoming a subscriber.
1 of 4

Jodiek Pratt draws a crowd of hungry poultry as she cleans out water buckets at Refuge River Ranch at 8200 East Leavenworth Road in Leavenworth on Friday. Pratt, who owns the ranch, said that she has lost most of the income from the property because ranch experience tours are banned under state pandemic rules for agritourism.

Jodiek Pratt carries Gump, a rescued turkey with weak legs, to feed along with other poultry at her Refuge River Ranch in Leavenworth.

Jodiek Pratt gets a kiss from one of her alpacas.

LEAVENWORTH — J.J. the stallion is on his last leg.

The 18-year-old horse can barely walk, holding up his injured front left hoof and limping on the remaining untrimmed three. His previous owner couldn’t afford a vet bill, and had to decide whether to put J.J. down or find him a new home. Before he arrived at Refuge River Ranch in Leavenworth, owner Jodiek Pratt was warned: This horse is mean.

Once at the ranch, though, J.J. softened.

“You can just put your head right on his head and he will just love on you,” Pratt said. “There is not a mean bone in his body.”

J.J. is just one of the 94 rescue animals at Refuge River Ranch, alongside kittens, chickens, goats and a 500-pound pig named Big Mama.

“I’m the kind of person that always roots for the underdog,” Pratt said. “I have a heart for the little guy, and I’m one of those little guys.”

Refuge River Ranch started as a short-term rental location, but Pratt found herself spending a majority of her time offering tours of the rescue animals to renters. After offering a few tours, Pratt realized she could turn her everyday life into a new business venture. Now, she worries about keeping the business afloat.

Small, family-operated farms like hers have been hit hard by the COVID-19 pandemic and subsequent agriculture restrictions, including Gov. Jay Inslee’s most recent restrictions on agritourism. Out of 35,793 farms in Washington, 95% are owned by a producer’s household or extended family, according to the U.S. Department of Agriculture.

During a time when most businesses are consolidating, Refuge River Ranch finds itself growing. People who could no longer afford to care for their animals started contacting Pratt, who found it hard to turn away an animal in need.

“I’m a bit of a sucker when it comes to injured or hurt things,” said Pratt. “As much as I shouldn’t be taking them in, I was taking them in in the middle of the shutdown.”

She officially added animal tours to the business in October, not knowing six months later business, operated by Pratt and volunteers, would come to a halt. After a short reopening at 25% capacity in June, Refuge River Ranch now has to close their doors again under Inslee’s new agritourism guidelines.

“I wasn’t just ready to give up and die,” Pratt said. “But, I was getting scared.”

The guidelines do not permit outdoor corn mazes, hayrides or rides of any kind, animal viewing, playground equipment or firepits, according to the Washington Farm Bureau.

“We were really discouraged by that,” said Tom Davis, director of government relations with the Washington Farm Bureau. “We’re concerned about whether those operations in those five counties are going to survive.”

The updated agritourism requirements are part of the governor’s Safe Start reopening plan. As of Aug. 4, Inslee extended the freeze indefinitely, prohibiting any county from advancing to a new stage of the four-phase plan.

“Agritourism is farming in this state,” Davis said. “We felt there was a way to mitigate these health concerns like in Phase 2 and 3 and we just weren’t given that chance.”

Christmas is over three months away, but Leavenworth Reindeer Farm is already making their list for Santa.

“That is the biggest time of the year for us,” said Erika Andersen, general manager and daughter of owners Kari and Hans Andersen. “We’re really crossing our fingers and sending our wish into Santa to be open for the holidays.”

Leavenworth Reindeer Farm closed their doors for the first time this year in March, when the initial Stay Home, Stay Healthy mandate took effect. They reopened for roughly six weeks while under modified Phase 1 before the updated agritourism guidelines prohibited animal viewing.

“You can’t pet or view animals, which made it impossible for us to do business,” said Andersen. “Kind of the whole point in coming would be to pet and feed the reindeer.”

After the updated regulations, the reindeer farm had to get innovative with business ideas. They started an adopt-a-reindeer promotion where donors could “adopt” one of the farm’s reindeers to help pay for medical supplies. All 17 reindeer were adopted in less than an hour of the promotion going live.

Even if Refuge River Ranch reaches its goal of $50,000, it’s only enough for the farm to break even from losses due to the shutdown, according to Pratt.

“If we reach that $50 (thousand), that will cover the deficit of the first shutdown,” Pratt said. “We’re not quite there yet, but enough that I can breathe now.”

While other businesses like retail might be more equipped to close shop and wait to weather the storm of the pandemic, farm owners fare worse. Farms still accrue expenses for animal care while being closed to the public and require labor for upkeep. As rescues, animals at Refuge River Ranch need extra care such as special food, minerals and vet visits, according to Pratt.

“I can’t turn off the lights and electricity and walk away,” Pratt said. “I have all these animals that their care still needs to take place.”

Making it through the fall first

While some farms had to close entirely, others saw their revenue cut in half. Smallwood’s Harvest in Peshastin is able to keep its indoor storefront open to the public but under the new mandate must prohibit all outdoor activity. This includes the business’s bounce pads, train rides and hay rides, along with an animal farm now locked off from viewing.

“As soon as I see a family with kids, I feel bad inside having to turn them down,” manager Juan Mendez said.

Roughly 40% of customers that visit Smallwood’s in a day come to view the animals, according to Mendez. He said 15 to 20 families a day stop by asking to see the farm animals.

Fall is harvest time and often when family farms can have their busiest season of the year. While customers can still u-pick pumpkins, with fall activities like mazes, hay rides and petting zoos canceled, some farms worry it won’t be enough to entice customers. Most chain grocery stores also offer pumpkins and fall gourds.

“This is the one time of year where those family farmers make the money that keeps these family farms operating,” Davis said.

For some farms in Chelan and Douglas counties, the rules seem too strict. In the time Leavenworth Reindeer Farm was open, face masks were required, one-way walkways were enforced and tours were only offered by appointment.

“If you can walk around Walmart, you should be able to take your family to the farm,” Andersen said.

The main concern for the farms, though, is continuing to have the resources to care for the animals. For Pratt and Refuge River Ranch, closing would mean having to find already displaced animals new homes again.

“The biggest thing is just to keep these animals healthy, happy and well,” Pratt said. “This is our livelihood. It’s not only my passion but also my business.”

Wenatchee museum reopening to public after 7 months of closure

Phase 2 means all public libraries in area will reopen Nov. 2