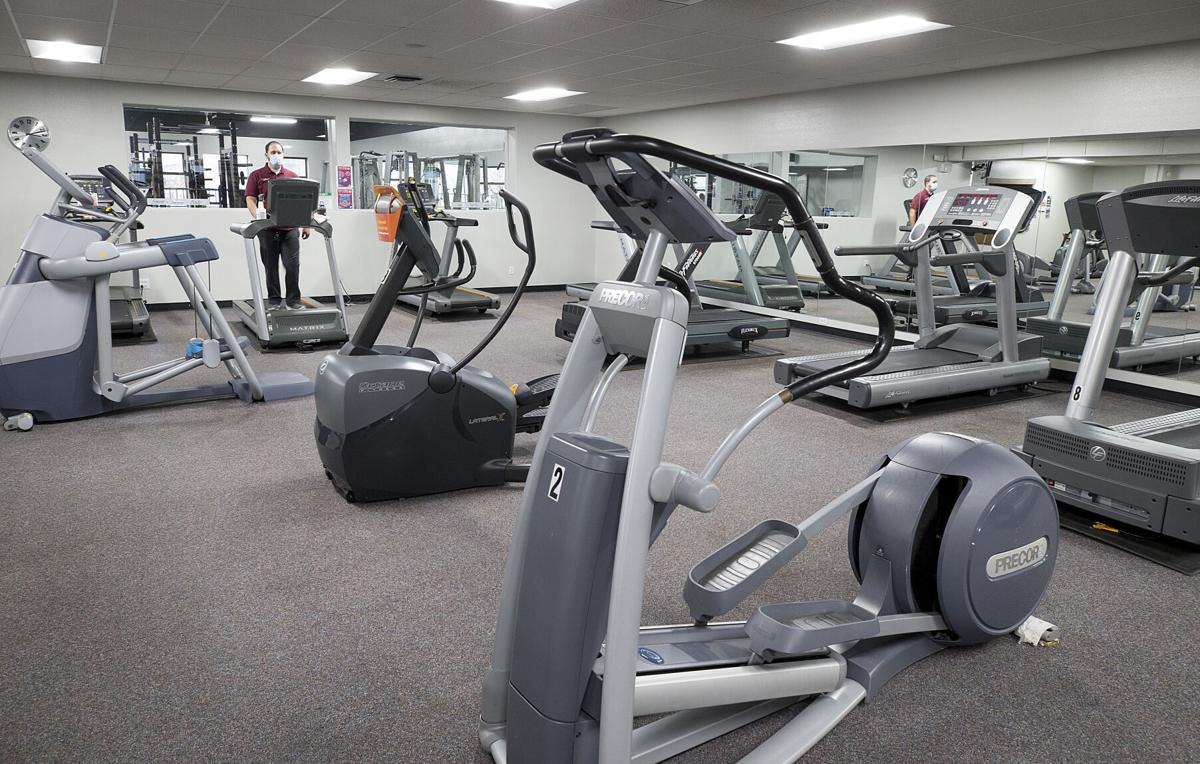 John Cumpton works out on Monday, the first day of reopening under Gov. Jay Inslee's new COVID-19 "Healthy Washington" plan. Cumpton says he's been using the stairs at Confluence Health, where he works, to stay in shape but is happy to be back using the fitness center at the YMCA. "It's really strange but it's really nice," he said of being back. "It's strange because there's hardly anyone here." 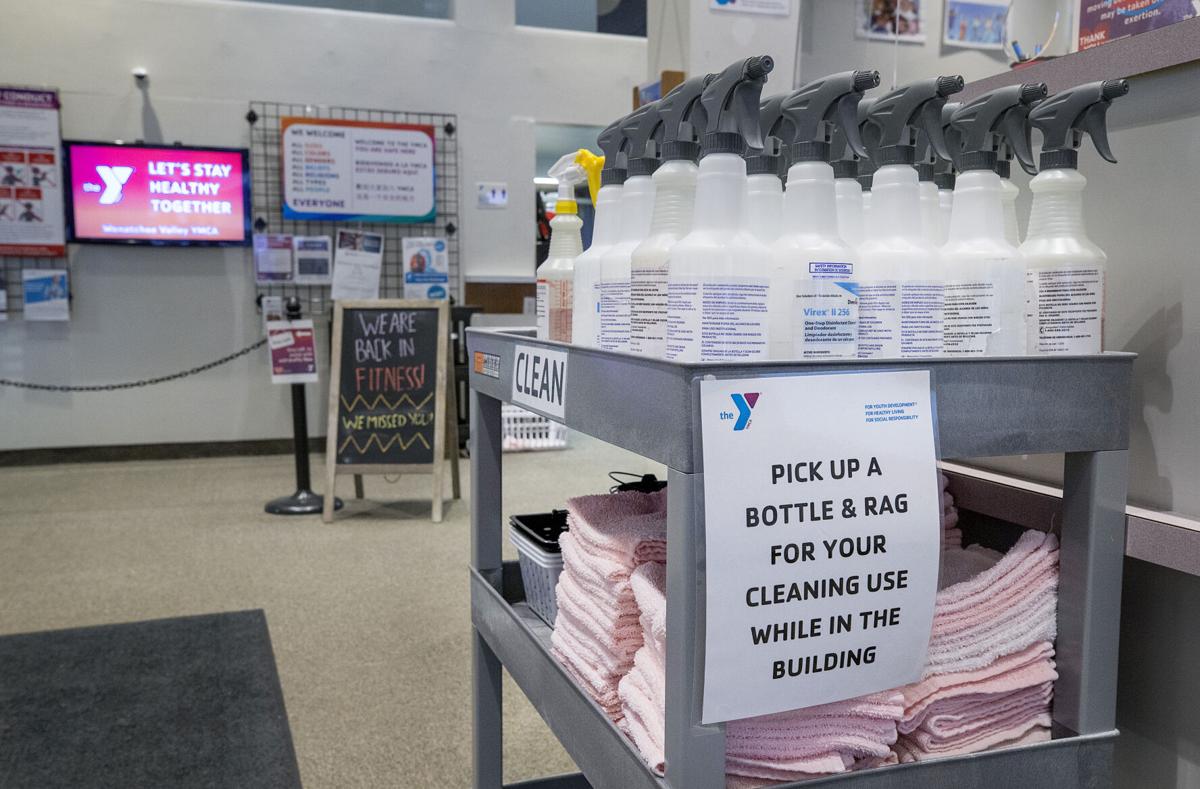 Bottles of sanitizer and stacks of towels greet YMCA members at the door on Monday.

John Cumpton works out on Monday, the first day of reopening under Gov. Jay Inslee's new COVID-19 "Healthy Washington" plan. Cumpton says he's been using the stairs at Confluence Health, where he works, to stay in shape but is happy to be back using the fitness center at the YMCA. "It's really strange but it's really nice," he said of being back. "It's strange because there's hardly anyone here."

Bottles of sanitizer and stacks of towels greet YMCA members at the door on Monday.

WENATCHEE — Gyms: the place people used to workout, catch up, socialize, compete or just go to get out of the house for a couple hours. It’s an option which briefly opened up last fall, but had its doors shut again due statewide lockdowns as COVID-19 increased.

Workout spaces were allowed to open again on Monday as a part of Gov. Jay Inslee’s newest two-phased reopening plan, the “Roadmap to Recovery.” Like previous plans, there are regulations.

A few rules to know before heading to the gym:

Skyler Wilson of Wenatchee said the past nine weeks have been crazy. Wilson was on his way to a workout at Worx Wenatchee of Wenatchee Valley on Monday morning.

“When it comes down to it, everyone being safe and spread out, I think, overtrumps the possible, slight chance of [getting] COVID,” he said.

Wilson said he thinks it is important to get out to a gym to improve mental health. The psychological impact of working out is a key part of keeping healthy, especially important during cloudy weather, he said.

“As long as they keep them clean, I don’t know why gyms are being punished,” he said.

The Wenatchee Valley YMCA’s workout spaces can have no more than — by the governor’s rules — 10 people inside at one time.

“It feels like we’re getting there … But this is not sustainable,” said Dorry Foster, chief executive officer at the YMCA. Hopefully there will be an improvement in regulations by next Friday, she said.

The YMCA does not have one big, giant workout room but instead several different rooms. The workout rooms are very isolated but safe, she said.

When people can take care of their physical health, their mental health can rebound quite quickly, Foster said. “We’re concerned about the mental health not only of our valley, but clearly our nation.”

“I think all the research has shown that the hotspots are not from fitness centers,” she said.

Worx of Wenatchee Valley does not have the same spacing challenging as the YMCA, but it still has to follow the same capacity guidelines.

“I’m glad that they recognized the need for people to get exercise,” said Blair McHaney, owner of Worx of Wenatchee Valley. Worx, like other gyms in North Central Washington, was closed for roughly nine of the last 10 months.

The 500-square-foot mandate means a combined total of roughly 97 people can be in Worx’s gyms in Wenatchee and East Wenatchee, he said.

People were really, really happy coming into both gyms Monday morning, he said. So far everything is going smoothly.

The Wenatchee Racquet and Athletic Club (WRAC) can fit roughly 60 people inside while adhering to state-mandated rules. The WRAC also had to endure the same closures as Worx.

Some members at the gym may come back right away, others may never come back, said Evy Gillin, WRAC general manager. The shutdowns have shrunk businesses for the WRAC to what it was a decade ago.

“This is supposed to be our 60th anniversary of the club … and come hell or high water we’re going to make it,” she said.

Gillin said it feels good to open up and have people back in the WRAC. “I’ve been here many days by myself [in this] dark and lonely, big building.”

Inside the gym, workout stations are evenly spaced apart, rooms are labeled with their capacity and water fountains are off limits. Over 30 cars were parked at the WRAC on Monday.

“I just hope that … the numbers in the area can continue to go down so we can get our community healthy again,” she said.

NCW Libraries closed down to in-person visits, in accordance with state guidelines