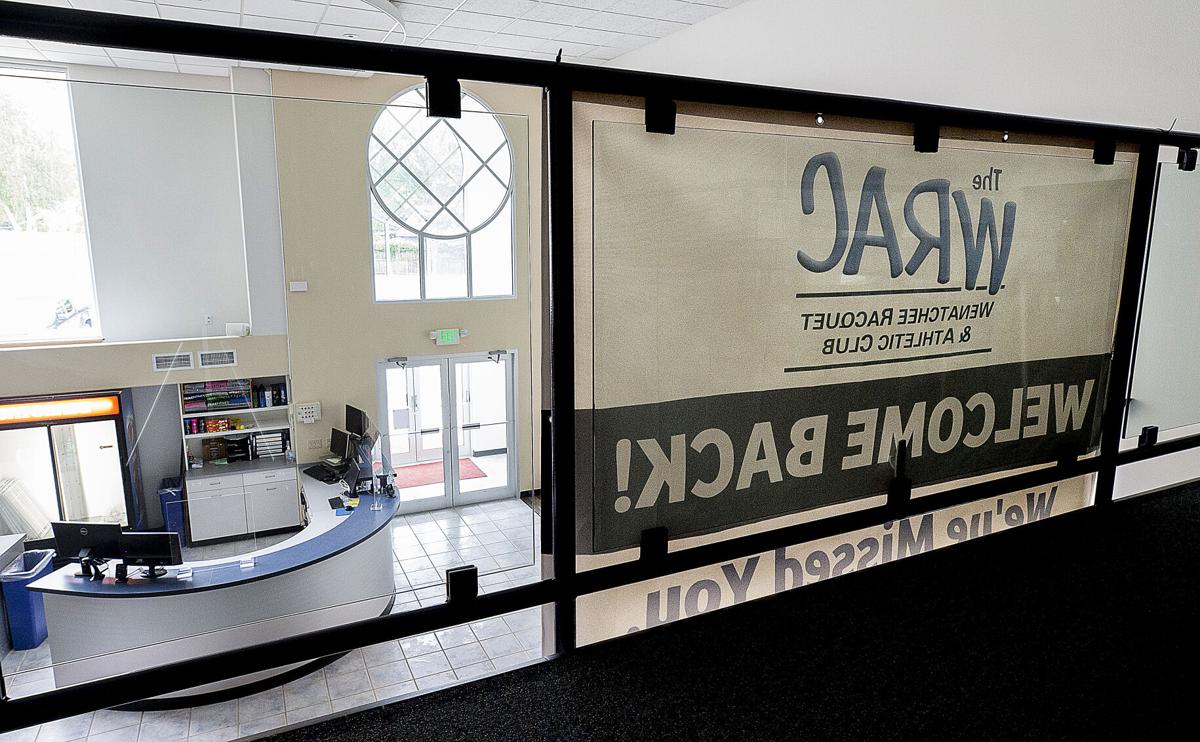 The Wenatchee Racquet & Athletic Club put up a sign at its entrance two months ago welcoming back members. At that time, management at the fitness facility thought the county would be moving into Phase 2 of the COVID-19 plan and under different guidelines. Indoor facilities at local gyms remain closed. 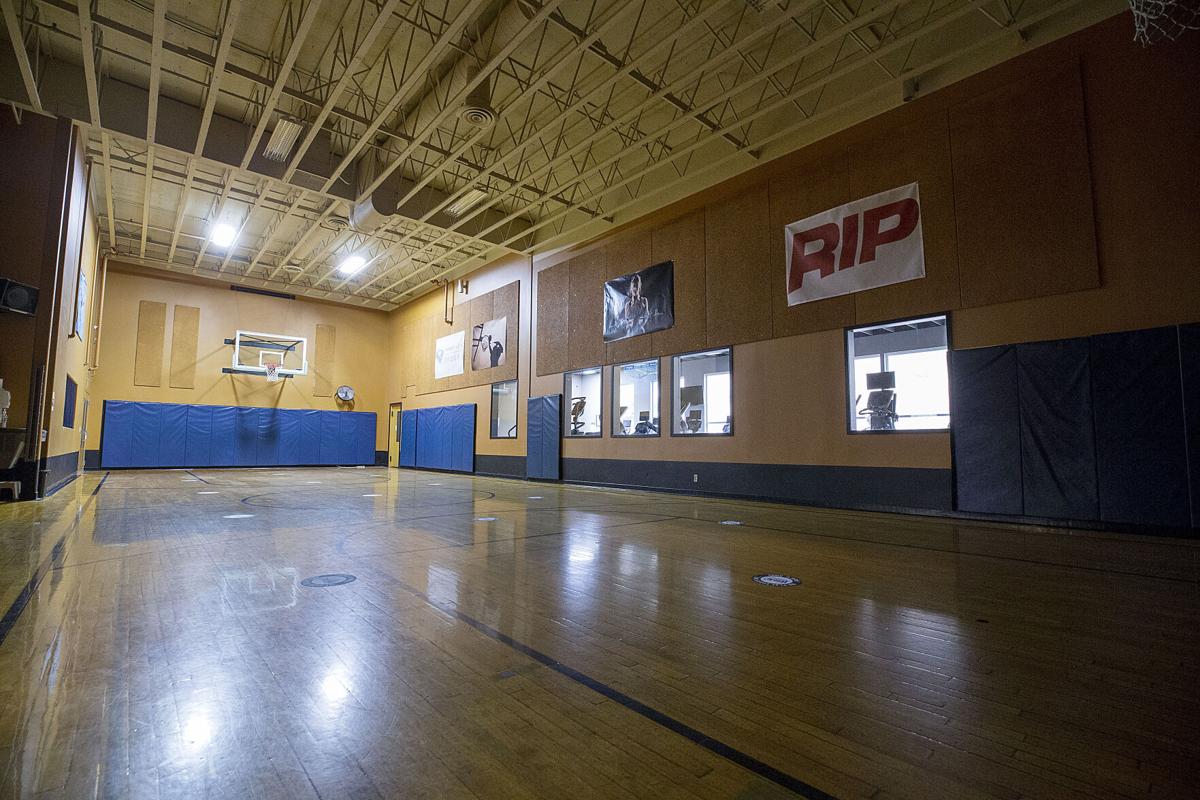 The gymnasium at the Wenatchee Racquet & Athletic Club would be used for fitness classes but no basketball under new state rules. The club could have 11 people in the room, maintaining a distance of 12 feet.

The Wenatchee Racquet & Athletic Club put up a sign at its entrance two months ago welcoming back members. At that time, management at the fitness facility thought the county would be moving into Phase 2 of the COVID-19 plan and under different guidelines. Indoor facilities at local gyms remain closed.

The gymnasium at the Wenatchee Racquet & Athletic Club would be used for fitness classes but no basketball under new state rules. The club could have 11 people in the room, maintaining a distance of 12 feet.

WENATCHEE — Over 260 yoga studios, fitness centers, gyms and health clubs around the state have banded together and joined the Washington Fitness Alliance (WFA) in hope of loosening some of Gov. Jay Inslee’s guidelines inhibiting indoor fitness.

And leading the charge are Blair McHaney, president of WORX gym, and Evy Gillin, general manager of the WRAC.

Their goal: get recognized as part of the solution, revise the current requirement of roughly 300 square feet per person (17x17), and gain independence from being grouped together with bars and restaurants in the phased reopening.

“We are part of a person’s health and lifestyle, and they count on us as part of their routine to stay healthy,” Gillin said. “Throwing us in the same mix as bars — it might be good for your mental health, but not necessarily physical. We’re hoping we can change that perception and be more a part of our communities.”

McHaney, who is also the founder and CEO of a data-collecting firm for the fitness industry called Member Experience Metrics (MXM), said his team has been collecting data from nearly 50 million member check-ins at 2,877 fitness locations around the country. Of those visits, there have been 1,155 positive COVID-19 cases, “but none of them were contracted at a gym,” McHaney said.

“In Colorado, there have been 532 outbreaks that have been traced to various locations; 54 have come from bars and restaurants, 17 from retail sites, 214 from healthcare facilities, 16 from grocery stores, 30 from offices. … There hasn’t been one fitness location determined as an outbreak site. Now with 44 states open, the check-in data is overwhelming that a spread is not happening in clubs. And still, we’re essentially going to be the last to open of anywhere in the U.S. It’s been a major point of frustration.”

Aside from the check-in data, which McHaney said clearly points to the limited exposure faced in fitness centers, he believes gyms are best equipped to handle contact tracing should an outbreak occur.

“We have members, not customers, so we know their name, where they live and phone number,” McHaney said. “Those are the only people that can come in, which makes us ideal. We know who is in our club, for how long and what machine they were using. And we can control where everyone’s face is pointed while they are lifting. We’re the only ones that can do that.”

McHaney had been working with other fitness alliances around the country when Inslee paused phased reopening in July and mandated that gyms have only five people inside the building at one time (regardless of size). So he called Gillin and proposed starting their own fitness alliance.

“We got together and contacted around; a board of five stood up within 24 hours,” McHaney said. “I know some of the people from the California Fitness Alliance and they were gracious enough to use their resources to create a website for us and hand it over to us. We rewrote the content and started contacting other clubs around that state to see if they wanted to join. We got 40 onboard real quick, reached out to the governor’s office and then had a meeting with three of his advisers that next Tuesday.”

As of Friday, 272 different clubs, from Bellingham to Spokane, have joined the WFA.

When/if fitness centers are allowed to open for indoor operations, McHaney and Gillin said both facilities are ready.

McHaney purchased two airPHX ventilation systems, which pull cold air in constantly and disinfect the entire facility; the WRAC uses UV lights in the air ducts to accomplish the same thing. Equipment has been moved to provide more space, barriers are stationed between ellipticals and treadmills, and each piece of equipment is outfitted with its own sanitation spray bottle. Masks will be required while walking around and dots have been placed on the studio floor for spacing in fitness classes.

“It’s overkill if we were a risky business,” McHaney interjected. “It’s just wrong when you can show that you are not with all the data points.”

Free COVID-19 testing to be offered in Cashmere

Pierce County team to aid against coronavirus in NCW

Local farms forced to reassess or shut down after updated agritourism guidelines for Phase 1.5 counties