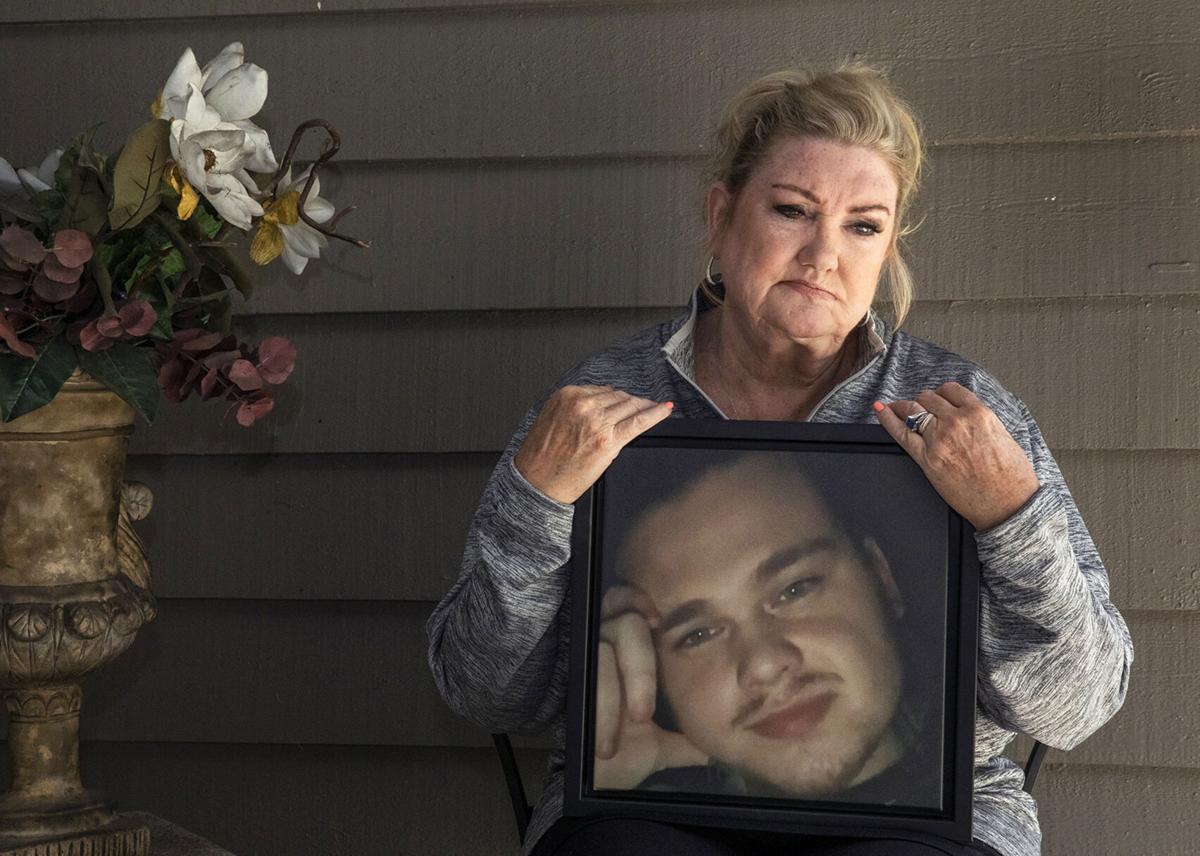 Colleen Gregoire, of Bellevue, talks to teens about the dangers of drugs after losing her son, Bobby, to an overdose last fall. The 20-year-old bought what he thought was Percocet and died after taking a pill that contained fentanyl. There were more fatal drug overdoses in Washington in 2020 than in any year in at least the past decade.

Colleen Gregoire, of Bellevue, talks to teens about the dangers of drugs after losing her son, Bobby, to an overdose last fall. The 20-year-old bought what he thought was Percocet and died after taking a pill that contained fentanyl. There were more fatal drug overdoses in Washington in 2020 than in any year in at least the past decade.

SEATTLE — More Washington residents died of drug overdoses in 2020 than any other year in at least the last decade, as people, struggling with the social isolation and loss of routine stemming from the COVID pandemic turned to substances more often, according to preliminary data from the state Department of Health.

Fatal drug overdoses increased by more than 30% over 2019, according to the data, an increase more than twice as large as any other year in the past decade.

Deadly opioid overdoses — from prescription painkillers, heroin, fentanyl and other similar substances — increased even faster, by nearly 40%, according to the data, more than triple the rate of any other increase in the past decade.

The numbers are likely to get worse. The Department of Health is still analyzing the preliminary data and causes of death in specific cases, and they expect the number of overdose deaths to grow even higher.

“It is reasonable to believe the psychological, social and economic impacts of COVID-19 led to an increase in drug use,” said Kristen Maki, a spokesperson for the state Department of Health.

And many more people reached out for help with drug or alcohol problems during 2020, according to state data.

Calls to the Washington Recovery Help Line, a toll-free phone line for people seeking help or treatment for substance abuse, increased more than 90% in 2020 over 2019, according to data from the program, which is primarily funded by the state.

The help line saw huge increases for all sorts of substances, both legal and illegal, as people sought to deal with the increased stress brought on by a year unlike any in our lifetimes.

Troy Seibert, the opioid use disorder manager for the recovery help line, said all the disruptions and traumas of the last year — job losses, isolation, illness, death — contribute to the increases.

“Any time we see folks in a state of despair, substance use is going to rise,” Seibert said. “COVID has certainly had a huge impact on the increased rise in substance use overall.”

The numbers mirror nationwide trends. More people died of overdoses in the 12 months ending in May 2020 than in any prior 12-month period, the U.S. Centers for Disease Control and Prevention reported last year, and the numbers “suggest an acceleration of overdose deaths during the pandemic.”

Caleb Banta-Green, a research scientist at the University of Washington’s Alcohol and Drug Abuse Institute and an affiliate assistant professor of public health, said COVID is likely working in two ways to increase overdose deaths.

The first is the obvious one: People are turning toward drugs and alcohol to deal with the strain of the pandemic.

“Stress is a trigger for relapsing into use or initiating use or using more, so certainly COVID is stressful in so many ways, whether it’s social or financially or housing or whatever,” Banta-Green said.

And, he said, social distancing measures mean that when people do use drugs, they’re more likely to use them alone. That means that if someone does overdose, they’re less likely to have someone there to care for them, to get them to a hospital or administer naloxone, which can halt the effects of an opioid overdose.

Banta-Green said it’s important to view substance abuse as a health issue, regardless of the specific substance. So while there have been a multitude of stories about rising alcohol use during the pandemic, and how to deal with it, other drugs should be treated the same way, Banta-Green said.

“Legal, illegal or prescription, we need to think about substance use as substance use and not think somehow that illicit substance use is different, because it isn’t,” he said. “It’s people using strong substances that in the moment make them feel better.

‘They don’t know what they’re taking’

If there’s one specific drug driving the rise in overdose deaths, it’s fentanyl, a powerful painkiller that has displaced heroin and prescription pills as the opioid responsible for the most deaths in Washington.

Fentanyl use has grown in recent years as it’s both cheaper and more powerful than other opioids. On the street, it most frequently comes in pill form, often marked “M30” or “A215” and disguised as another opioid, like Percocet or oxycodone.

Bobby Ausbun was 20 years old last October and had recently moved in with his girlfriend in Bellevue when he bought what he thought was Percocet off the street.

Ausbun had been introduced to the painkiller a year before, after he got his wisdom teeth out.

“Bobby was always filled with a lot of anxiety, he was born that way,” his mother, Colleen Gregoire, said. “When he took Percocets when he had his teeth removed, I remember him saying, ‘This is the first time in my whole life I haven’t had anxiety.’”

He hadn’t taken any pills in months, his mother said, but, starting a new job at a grocery store meat department, Ausbun was feeling nervous. He bought a few pills.

His mother isn’t sure if he took a whole pill or half of it — they found half a pill in his apartment — but it was enough to kill him. He died Oct. 9.

The medical examiner found only fentanyl in his system, Gregoire said.

Ausbun, 6 feet, 6 inches tall, with “a heart of gold,” loved basketball and video games and hanging out at home, his mother said. “He was the kindest person you would ever meet.”

“Bobby’s happy place was home. He liked to be home, didn’t go to a lot of parties, didn’t,” she paused. “Was pretty much a homebody.”

Gregoire has begun giving presentations to teenagers and school groups, hoping to warn kids about the dangers of pills whose true contents they can’t be sure of.

She’ll hand out colored Tic Tac breath mints to the students, with a couple white ones mixed in, representing a tainted dose. Then the students who got the deadly pill have to lie down, briefly, and are covered with a sheet.

“I was afraid it might be too much, but I had their attention,” Gregoire said. “It’s something they’re never going to forget.”

Experts agree that fentanyl’s deceptive appearance — often just a benign-looking little blue pill labeled as something else — belies its potency and has contributed to its deadliness.

A drug user can look at a packet of heroin and make judgments on color, on viscosity, on other things that “sort of speak to them and say, ‘This might be different,’” Maroon said.

What an amazing year for World's Best! This competition has never been as competitive as it was for 2021! The community known competition saw more than 13,000 nominations in round 1 which made up more than 2,300 businesses, people, and places across our community.

WENATCHEE — Workers looking for jobs, or a new career, have opportunities this summer in what is currently a hot job market. Read more