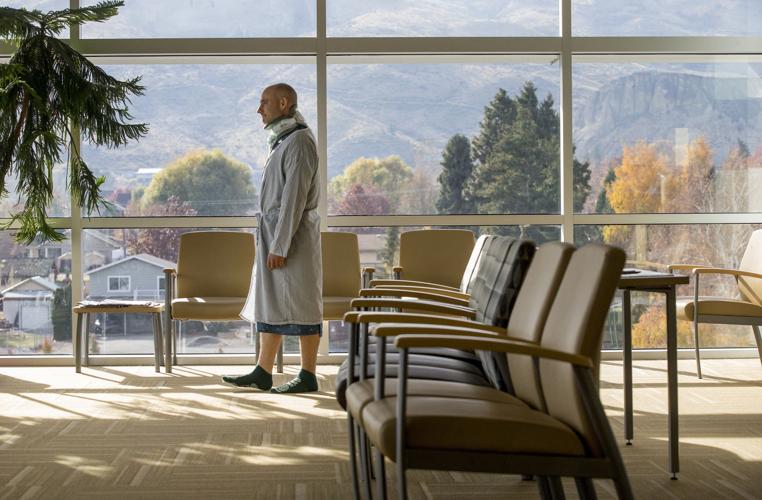 Ryan Cairnes walks around the fourth floor of Central Washington Hospital on Friday, recovering from a 400-foot tumble down part of Cannon Mountain near Leavenworth on Sunday. He was rescued Tuesday after making his way to the Stuart Lake Trail with broken bones in his neck, knee, scapula and ribs. 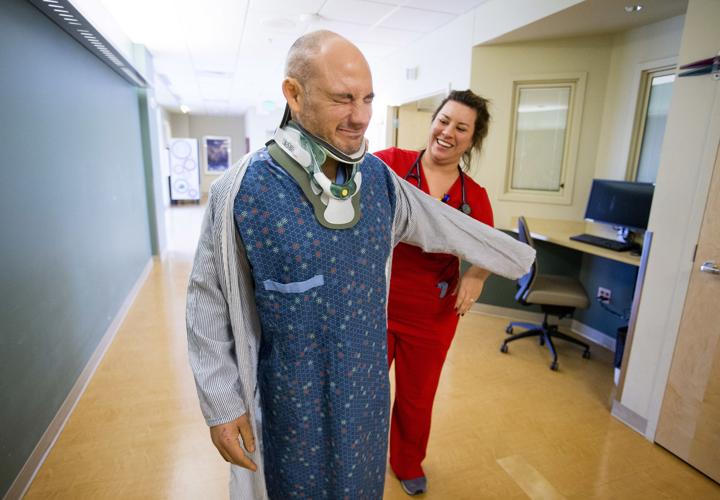 Ryan Cairnes winces as Registered Nurse Kristen Baltz puts on his robe at Central Washington Hospital on Friday. He says he hopes to be out of the hospital later that day, recovering from broken bones in his neck, knee, scapula, and ribs. 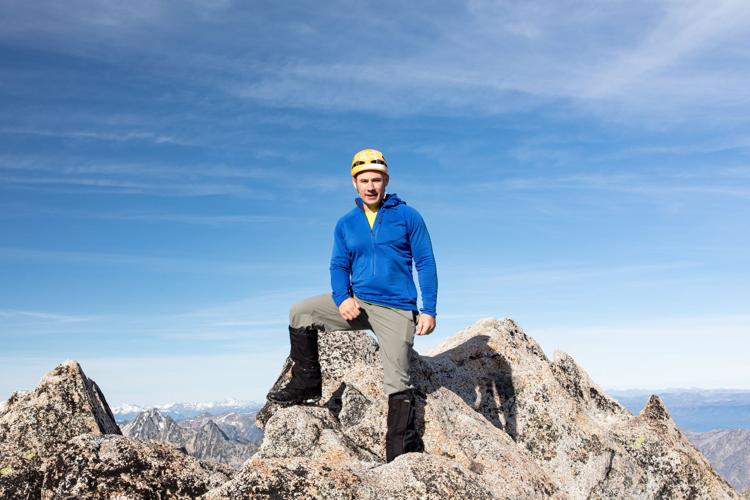 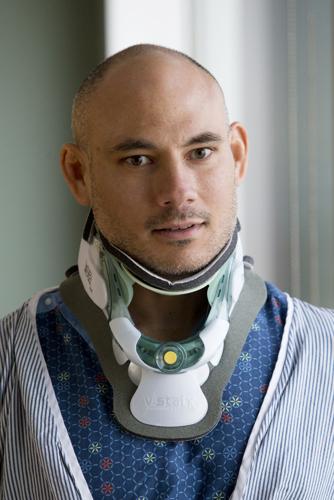 LEAVENWORTH — On Tuesday, Ryan Cairnes snapped a picture of the dirt, removed the camera’s memory card and then put it in his pocket. It was a throwaway, but at least now the authorities would have an idea of when he was last alive should he die.

It’d been a day and a half since he tumbled 300 feet down an icy slope on Cannon Mountain in the Alpine Lakes Wilderness. His neck, right patella and sternum were fractured. His ribs were battered, his arms bruised and his legs bloodied. Because no one knew where he was, it might be days before anyone noticed he was missing.

“I could just lay there and look at the stars and I knew that was probably the last thing I was ever going to do,” Cairnes said Thursday on the fourth floor of Central Washington Hospital. “And I knew that I couldn’t do that. I knew I had to take the hard way out.”

Cairnes, a 36-year-old senior program manager with Microsoft in the Seattle area, dove into mountaineering a year and a half ago and has since summited more than 30 of the state’s 100 tallest mountains.

He entered The Enchantments on Saturday morning. The plan was to bag as many peaks as he could over the next two days: up Aasgard Pass to Dragontail Peak and then on to Little Annapurna, sleep overnight and then summit McClellan Peak, Enchantment High Peak and finally Cannon Mountain on Sunday.

In his pack were 45 pounds of gear, including coats, an all-weather tent, waterproof bag, sleeping bag, avalanche shovel, crampons and an ice axe.

If all went well he’d be home in Seattle Sunday night.

He reached the top of 8,638-foot Cannon Mountain about 4 p.m. and then sent his mother in Pennsylvania a text message, saying he was wiped out, but in good spirits. Normally he’d call, but his phone battery was dying and daylight was fading.

Cairnes made his descent down the west aspect of the mountain, following a GPS route from a previous climber. He later learned this was not the recommended route.

He was making good time, descending 2,000 feet in roughly an hour, but as the evening grew dark he encountered a long boulder field with a staircase of small cliffs. The first was about 15 feet high. Nothing crazy.

“I didn’t have any worries about downclimbing it,” Cairnes said. “At that point, I was a little exhausted, though, to the point where I probably wasn’t making super clear judgements. I just wanted to get out.”

He wasn’t expecting ice this low in elevation. He’d crossed snowfields earlier in his trip, but that was in the 7,000-foot level. Not his current elevation of 5,400 feet.

“So I grabbed onto my first handhold and when I tried to get the second handhold it just kind of, something didn’t work,” Cairnes said. “Next thing you know, I was sliding.”

“I said to myself right then and there, I’m like, ‘You’re gonna die right now.’ I said, ‘There’s no way you’re not gonna die,’” Cairnes said. “I guess the only question I had in my mind was like, ‘I wonder what it’s gonna be like?’ you know, to die.

His next thought, as he continued to slide, was of disappointment.

He shot off a cliff and crashed into a boulder. He felt his body crunch.

A minute passed before he could suck his first breath. He tried to stand but his body collapsed. He could hardly hold his head up and his arms felt like they were on fire, but his pack and now badly dented helmet protected his spine and head.

He saw a light flashing in the distance. Someone must’ve seen him, he thought. He’d been climbing with a headlamp but lost it in the fall. He signaled SOS with an emergency light.

He stayed put — not that he had much of a choice — and slept against a boulder.

The next morning he awoke to football-sized rocks crashing down the mountain within a foot of his head. This wasn’t a safe place to stay. He had to move.

“I was looking at my body like, 'Let’s do this' — and I couldn’t physically move. It was like I was paralyzed,” Cairnes said. “I said, ‘Ryan, this will kill you.’”

He grabbed a few essentials — waterproof jacket, stuff sack, sleeping bag and small jacket — and crawled 100 feet to relative safety. That took over an hour. He sat and listened for helicopters.

“I was kind of losing hope, I got super thirsty,” Cairnes said. “And I knew there’s basically three things you die from: exposure, lack of water and lack of food.”

He moved to a stream 200 feet away. The crawl took hours.

He bivouacked by the stream, wedging his feet into rocks to keep from sliding, even though it hurt. As the sun set, he calculated the chances of a rescue. Other than his mom, no one knew he was on Cannon Mountain.

The odds were low. Tomorrow, he’d make his move.

If the hubcaps fly off as you cross the finish line, so be it, he thought.

“So I said, ‘You know, what’s the worst thing that can happen to your body? Like if it’s going to break, you might as well just break it,” Cairnes said. “It’s just pain. It’s going to suck.”

He woke up with the sun again Tuesday. His torso trashed from the fall, it took 15 minutes to sit up.

“I walked over to the stream on two feet and I just said, ‘My two feet are going to work today’ and filled up the water bag and chugged as much water as I could,” Cairnes said.

He clipped a water bottle to his body and then dragged a few items behind him in his sleeping bag. He left his SLR camera behind, but not before taking a photo of the dirt as a timestamp.

Cairnes used an 8-foot branch as a walking stick, leaned heavily on his left leg and started walking.

About a thousand feet down, he heard helicopters.

“I start hearing the birds in the air and they were over Cannon so I knew immediately my mom called them in,” Cairnes said.

One popped over the ridge. He laid out his sleeping bag and signaled SOS with his emergency light.

“I’m ready to cry. Here it is finally,” Cairnes said. “And then the bird went right back over the ridge, didn’t see me. It was heart wrenching.”

Cairnes kept moving, but he continued to see the helicopters swoop through The Enchantments. They were looking in the wrong place.

By the end of the afternoon, he’d reached a boulder field. He laid in a T on a boulder, hoping he’d be seen by a pilot. He wasn’t. The helicopters headed out for good around 4 p.m.

He was faced with another decision: stay here and hope they see him or head into the forest and gun for the trail? By staying in place, he’d be visible, but would he be able to move again? The longer he stayed still the tighter his body became. But he certainly wouldn’t be visible in the trees.

He went for it, moving as fast as he could along a deer trail.

“At that point I wasn’t even thinking about my legs, my legs were just firing with all cylinders and I was just going,” Cairnes said.

They didn’t say anything.

“I thought, ‘Well that’s kind of messed up,’” Cairnes said.

But as they got closer, they asked, “Are you Ryan?”

“We’re looking for you,” they said.

His mom had called the Chelan County Sheriff’s Office and reported him overdue at 2 p.m. Monday.

The four were two members of the Chelan County Mountain Rescue Association and two traveling nurses who’d been out hiking and then joined the search.

One of their first questions: “Can you walk out?”

Cairnes was wheeled out in a stretcher and then transported to Central Washington Hospital. His neck is in a brace and it pains him to stand, but somehow nothing is broken.

On Friday, Dan Fleming, a friend from a wilderness first-aid class over a year ago, went to Cannon Mountain to retrieve the gear Cairnes left behind. He found it all.

Recounting his dance with mortality from a lounge at the hospital, Cairnes feels lucky to be alive.

“It was eye-opening,” Cairnes said. “I shouldn’t be here.”

There are a few things he’d do differently: pack an emergency beacon, let others know his route and do more route research.

But after two days with a broken body in below freezing temperatures and almost entirely self-rescued, there are a few things he thinks he did right: know how hurt you are, know where you are and know if anyone’s coming for you, he said.

“Attack the things that will kill you first,” Cairnes said.

Cairnes plans to return to hiking and mountaineering after he heals.

Pete O’Cain is a graduate of Central Washington University, served in the Marines Corps and covers public safety in Chelan and Douglas counties. He also leads The Wenatchee World’s wildfire coverage.

This offer is currently unavailable.