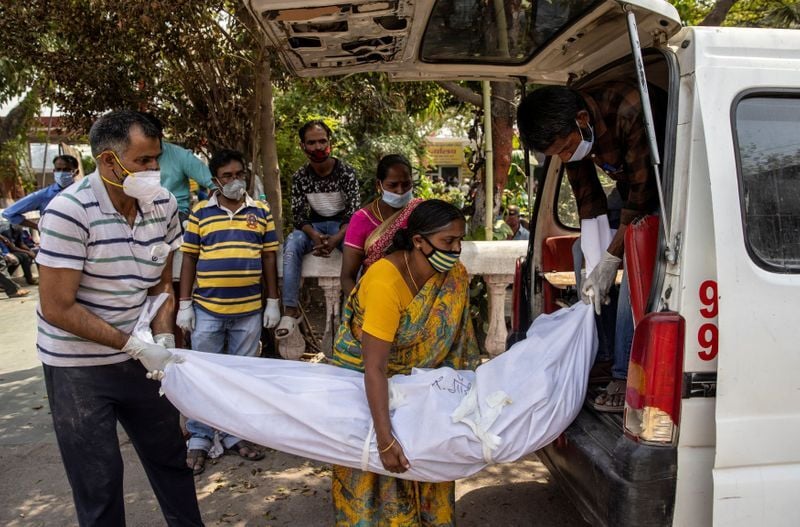 Relatives carry the body of a person, who died due to the coronavirus disease (COVID-19), for cremation at a crematorium ground in New Delhi, India, Wednesday. 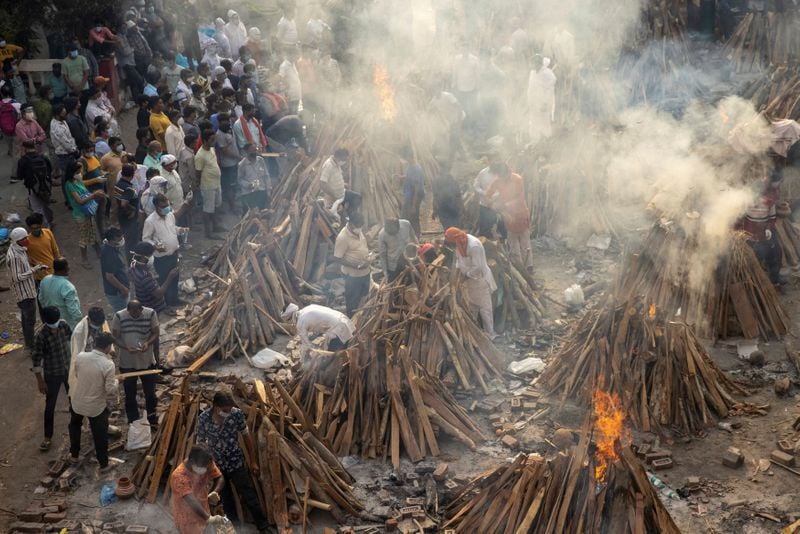 People cremate their relatives, who died due to the coronavirus disease (COVID-19), at a crematorium ground in New Delhi, India, Wednesday.

Relatives carry the body of a person, who died due to the coronavirus disease (COVID-19), for cremation at a crematorium ground in New Delhi, India, Wednesday.

People cremate their relatives, who died due to the coronavirus disease (COVID-19), at a crematorium ground in New Delhi, India, Wednesday.

NEW DELHI/MUMBAI — India’s total COVID-19 cases passed 18 million on Thursday after another world record number of daily infections, as gravediggers worked around the clock to bury victims and hundreds more were cremated in makeshift pyres in parks and parking lots.

India reported 379,257 new infections and 3,645 new deaths on Thursday, health ministry data showed, the highest number of fatalities in a single day since the start of the pandemic.

The world’s second most populous nation is in deep crisis, with hospitals and morgues overwhelmed.

“The ferocity of the second wave took everyone by surprise,” K. VijayRaghavan, principal scientific adviser to the government, was quoted as saying in the Indian Express newspaper.

“While we were all aware of second waves in other countries, we had vaccines at hand, and no indications from modelling exercises suggested the scale of the surge.”

India’s military has begun moving key supplies, such as oxygen, across the nation and will open its healthcare facilities to civilians.

Hotels and railway coaches have been converted into critical care facilities to make up for the shortage of hospital beds.

India’s best hope is to vaccinate its vast population, experts say, and on Wednesday it opened registration for all above the age of 18 to receive shots from Saturday.

But although it is the world’s biggest producer of vaccines, India does not have the stocks for the estimated 800 million now eligible.

Many who tried to sign up for vaccination said they failed, complaining on social media of being unable to get a slot or even to simply get on the website, as it repeatedly crashed.

”Statistics indicate that far from crashing or performing slowly, the system is performing without any glitches,” the government said on Wednesday.

More than 8 million people had registered, it said, but it was not immediately clear how many had got slots.

A local official in Mumbai said the city had paused its vaccination drive for three days as supplies were running short, while officials said the worst-hit state of Maharashtra was likely to extend strict coronavirus curbs by another two weeks.

Only about 9% of India’s population of about 1.4 billion has received a dose since the vaccination campaign began in January.

However, while the second wave overwhelms the health system, the official death rate is below that of Brazil and the United States.

India has reported 147.2 deaths per million, the Reuters global COVID-19 tracker shows, while Brazil and the United States reported figures of 1,800 and 1,700 respectively.

However, medical experts believe India’s true COVID-19 numbers may be five to 10 times greater than the official tally.

At Delhi’s Holy Family Hospital, patients arrived in ambulances and private vehicles, some gasping for air as their oxygen cylinders ran out. In the ICU, patients lay on trolleys between beds.

”Someone that should be in the ICU is being treated in the wards,” Dr Sumit Ray, head of the unit, told Reuters.

”We are completely full. The doctors and nurses are demoralised, they know they can do better, but they just don’t have the time. No one takes a break.”

The U.S. State Department issued a travel advisory on Wednesday against travel to India because of the pandemic and advised its citizens to leave the country.

Prime Minister Narendra Modi has been criticized for allowing massive political rallies and religious festivals which have been super-spreader events in recent weeks.

”The people of this country are entitled to a full and honest account of what led more than a billion people into a catastrophe,” Vikram Patel, a global health expert at Harvard Medical School, said in the Hindu newspaper.

The supplies will begin arriving on Thursday, it added.

The United States also has redirected its own order of AstraZeneca manufacturing supplies to India, to allow it to make more than 20 million doses, the White House said.

Bangladesh said it would send about 10,000 vials of anti-viral medicines, 30,000 PPE kits, and several thousand mineral and vitamin tablets.

Germany will send 120 ventilators on Saturday, and a mobile oxygen production facility next week, its defence ministry said.

Five months and $100,000 later, Seattle City Council asks: Where are the street sinks?

Payroll Protection Program running out of money for small businesses