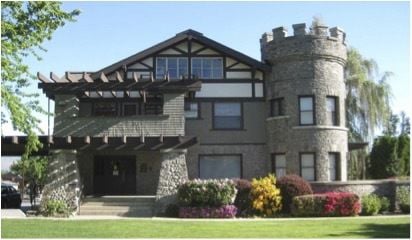 Here are five things about Wells House in Wenatchee:

1. Wells House is the only publicly-held mansion in the Valley and had been taken care of by the Well House Committee for the past 40+ years. W. T. and Adelaide Clark, with their five children, lived in this grand Craftsman mansion with its distinctive turret, which they built in 1909.

2. Truly one of Wenatchee’s founding fathers, Clark had been hired to bring irrigation water from Leavenworth, building the Highline Canal to carry water and then built the first pedestrian traffic bridge across the Columbia River which also carried a pipeline carrying water to Douglas County. It stands today after over 100 years, still carrying water.

3. In 1919, the Clarks sold their mansion to A. Z. and Emogene Wells. Mr. Wells was in the hardware business and with his nephew, Al Morris, first developed Wells & Morris Hardware, then created Wells and Wade Hardware with Jim Wade. His success in developing stores that provided products and services to orchardists and farmers throughout the NCW area left a lasting legacy.

4. When Wells passed away in 1950, the House and surrounding acreage was gifted to the Wenatchee School District to be used for a junior college. The college used the house for administration, girls’ dorm rooms, classrooms and cafeteria for the next 20 years. Proposed for demolition, a group of citizens, many who had attended the college and lived in the house in the earlier years, protested the demolition plan and asked the College Board of Trustees to give the house to the group. The Wells House Committee was born and in 1975, the State Board of Education deeded the property to them.

5. Today, the Committee is an affiliate of the Wenatchee Valley Museum and Cultural Center. A popular event site, the house and surrounding grounds have hosted many weddings, parties and events and continues to do so today. A fundraiser has begun to raise monies for needed maintenance and restoration repairs. Passionate history and preservation volunteers are always needed to help with the Committee’s annual Christmas Open House and Spring Tea as well as serving as hosts at events! We love our beautiful house and urge the public to see it just off of 9th at Nelson. For more information about how to participate on the Committee or have an event at Wells House, contact the Museum at 888-6240.