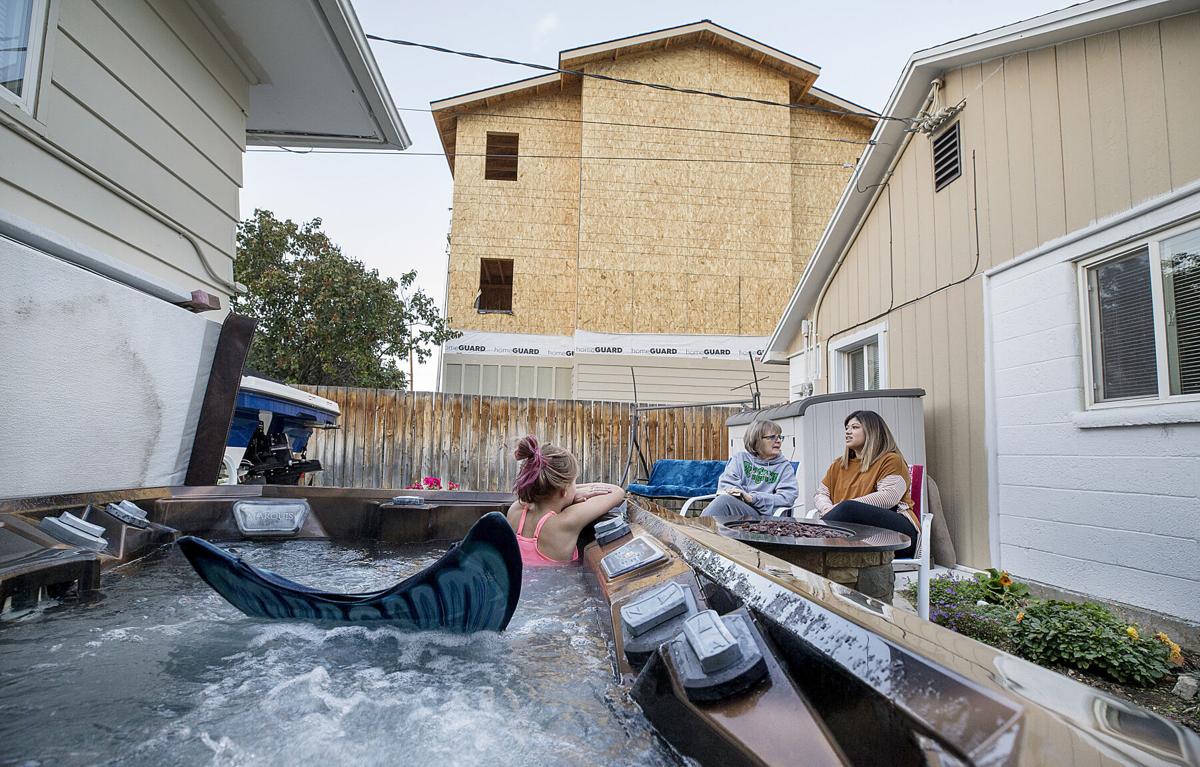 A three-story townhouse under construction is the backdrop for neighbors' outdoor activities. Vicki Winn, center, talks to Shelly Kelly, who lives in the house at right, behind Winn's house in late October. Winn's granddaughter, Sam Brown, 8, watches the conversation. 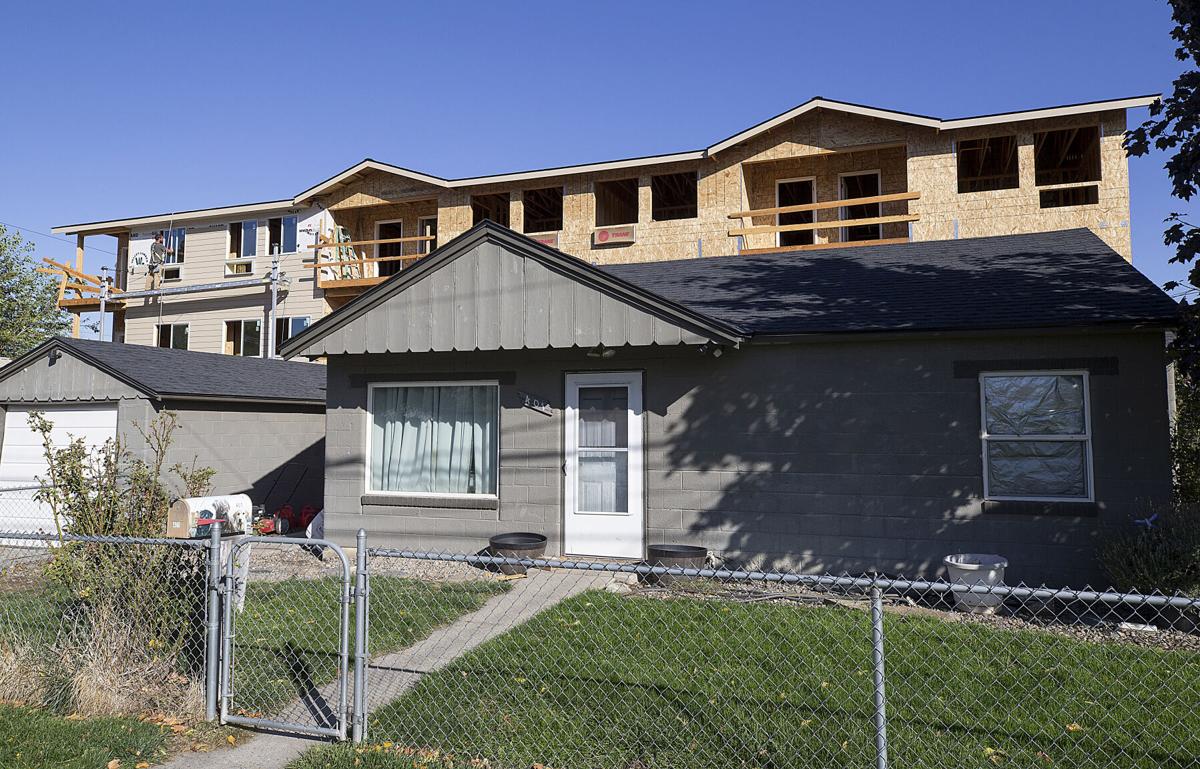 A five-unit townhouse building is going up near the backyards of houses on Sunset Avenue in Wenatchee. 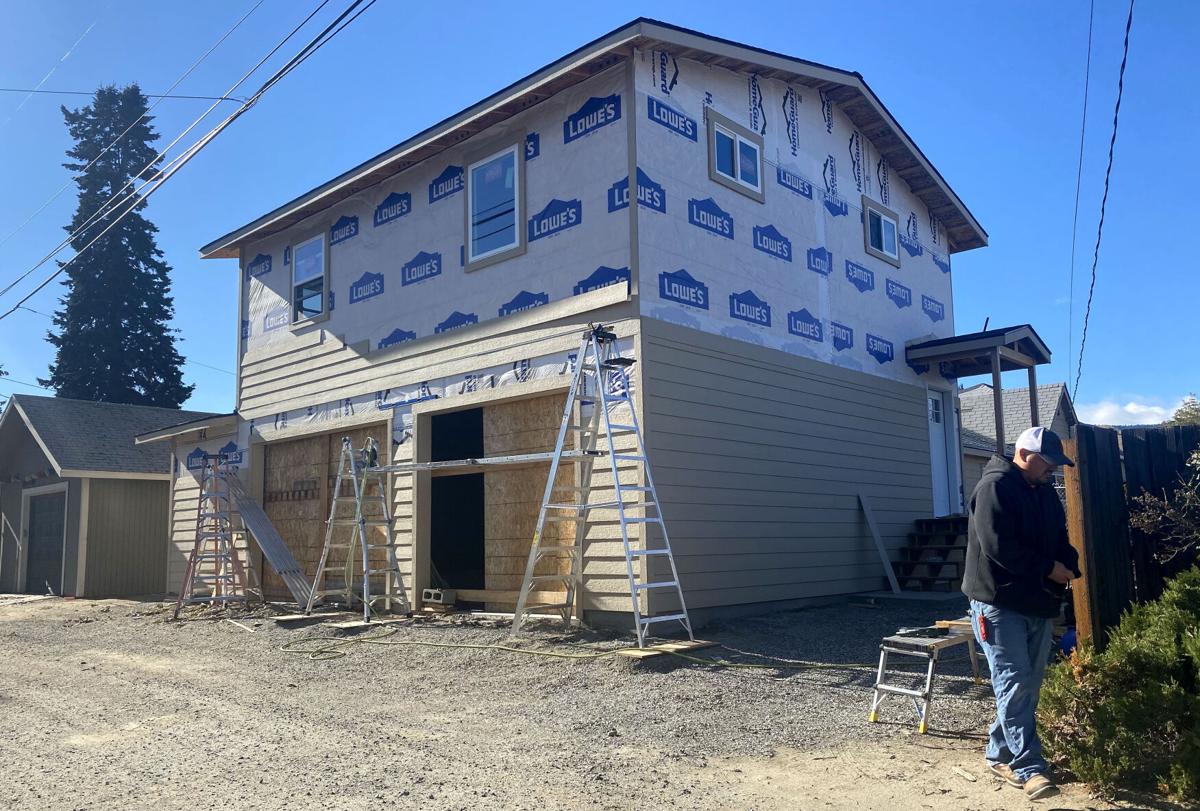 Alberto Mejio is building a garage with an upstairs apartment behind his house on North Franklin Avenue in Wenatchee. He plans to rent out the apartment.

WENATCHEE — Landlocked by the foothills to the west and the Columbia River to the east, the city of Wenatchee has an acute need for infill housing.

“It’s going to be critical over the next 10, 15, 20 years,” says Planning Manager Stephen Neuenschwander.

Developing empty parcels or adding onto existing properties is an important part of any city’s growth and it’s picking up steam in Wenatchee — especially with smaller housing types like townhouses or duplexes.

Working with developers and community groups, the city in 2019 implemented housing code to allow more diversity in new housing developments. It’s now easier for developers to build everything from smaller townhouses to courtyard-style units, Neuenschwander said.

“That kind of paved the way for some of these smaller infill projects like cottages and townhomes,” he said. “It’s hard to tell what would have happened in 2020 with COVID having an effect on permitting, but hopefully we’ll continue to see more projects like these.”

Among the other changes to the code was a decrease in the number of parking stalls required for some developments, which builders have previously identified as an impediment. Changes to some easement standards were also made to allow access to unusually shaped property parcels, Neuenschwander said.

Local builders have responded to the changes, most recently with an uptick in the number of single accessory dwelling permits issued. They allow the construction of secondary residences that are often built next to or behind a single-family home. Home owners will commonly rent out the secondary residence, or provide it to a friend or family member.

The city’s planning department is now meeting with another homeowner interested in building a pair of cottages in their backyard, Neuenschwander said.

He also serves on the Housing Solutions Group for Our Valley Our Future, which has pointed to the need for both infill housing and diverse housing types for years. Its 2018 housing solutions report “Where Will We Live” identified both as priorities in the near future.

But even through the housing code revision process, the city has tried to maintain a balance of development priorities with quality of life for residents, Neuenschwander said.

“In general, it was just a wide variety of changes. Open spaces requirements for each of these homes was one,” he said. “As we’re increasing density opportunities and infill opportunities, one of the main components that our consultants shared with us, and that the planning commission and council agreed with, is that each of these units have open space.”

Surprise for some, financial security for others

WENATCHEE — As some infill projects have taken shape, they’ve been met with surprise from neighbors.

One five-unit townhouse development under construction near the intersection of Fifth and North Miller streets is being built just a few feet behind neighboring houses.

Dick Winn, who’s lived in one of those homes on Sunset Avenue for 39 years, said his surprise at the new two-story backdrop is turning to acceptance.

“It’s just like anything else, it’s something we look at every day but once it’s there for a while you just don’t pay attention to it anymore,” he said.

It's one of two separate five-unit townhome projects underway off Fifth Street in the city.

For homeowners like Alberto Mejio, adding a single accessory dwelling unit will be a source of financial security for his family.

Mejio is building a new garage with a one-bedroom upstairs apartment behind his home on North Franklin Avenue. He plans to continue to live in the main home with his girlfriend, Melissa, and rent out the apartment to help cover their mortgage.

“The rental prices now are pretty crazy, so we’ll be paying 90% of our mortgage with whatever we get out of here,” he said. “It’ll be nice because we’ll have the extra money to do whatever.”

The apartment will be 728 square feet with its own parking, private access, and washer and dryer set, he said.

The family bought the property in 2015 and have seen its value increase with the rest of Wenatchee’s housing market, Mejio said. They plan to stay for at least a couple more years, then they’ll likely rent out the main house too.

“We were debating ... to maybe sell or build something but with prices being so crazy we decided to set this up, that way in the future we can maybe keep them as rentals and use that income for the new mortgage,” he said.

Mejio works in construction, and recently graduated from Central Washington University with a construction management degree, so he’s been able to do most of the work on the apartment himself.

That’s helped keep costs down and make it a worthwhile investment, he said. But the construction industry — which was dealt a hand of uncertainty with the pandemic — will also factor into the family’s future plans for the property.

“I work in construction too so if that slows down, my work slows down,” he said. “If it maintains a decent rate, we’ll probably flip it and move on to the next.”