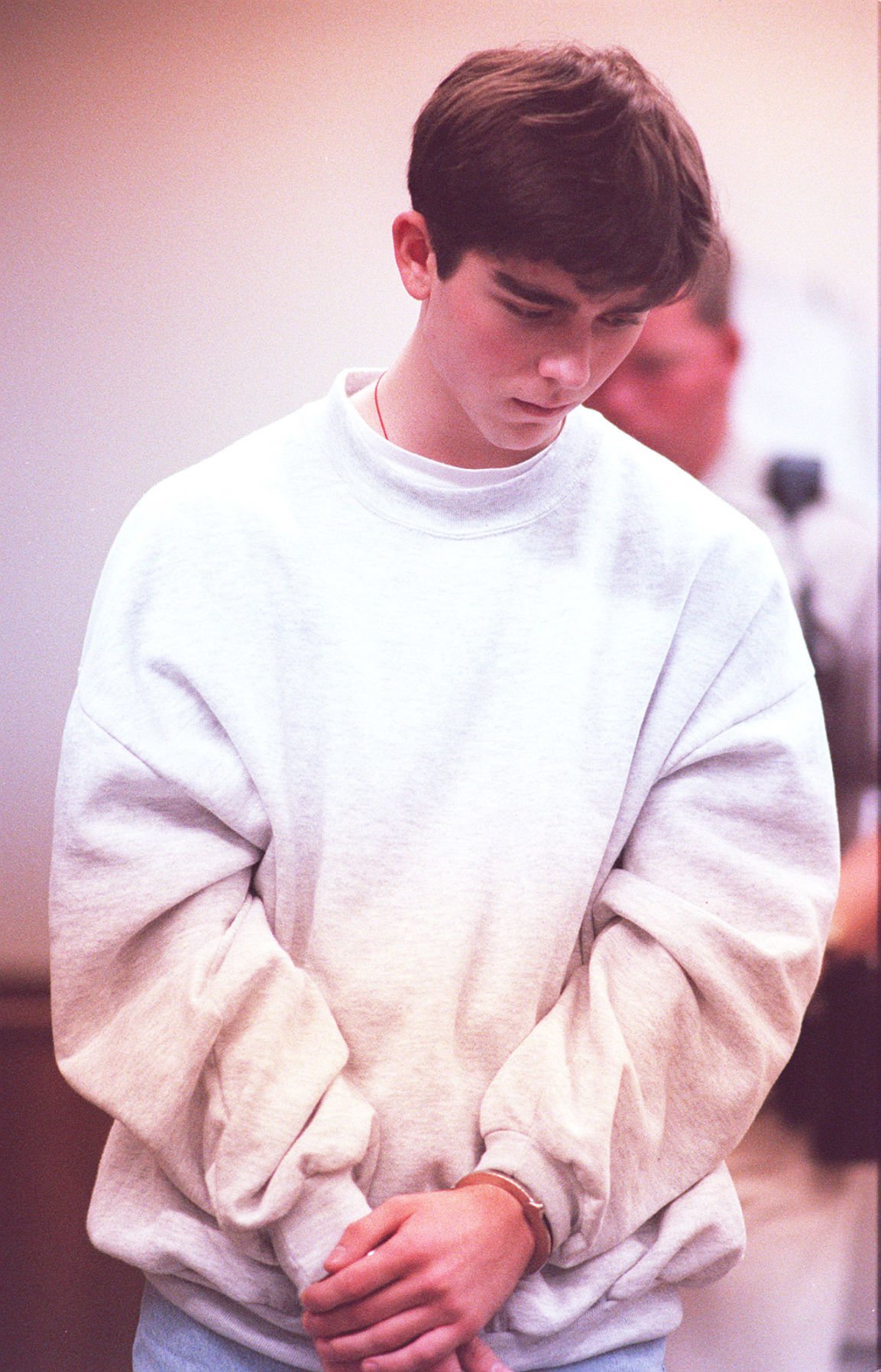 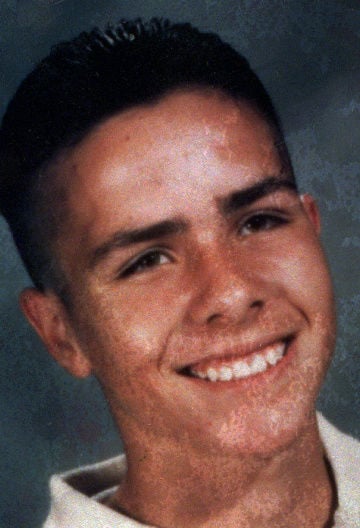 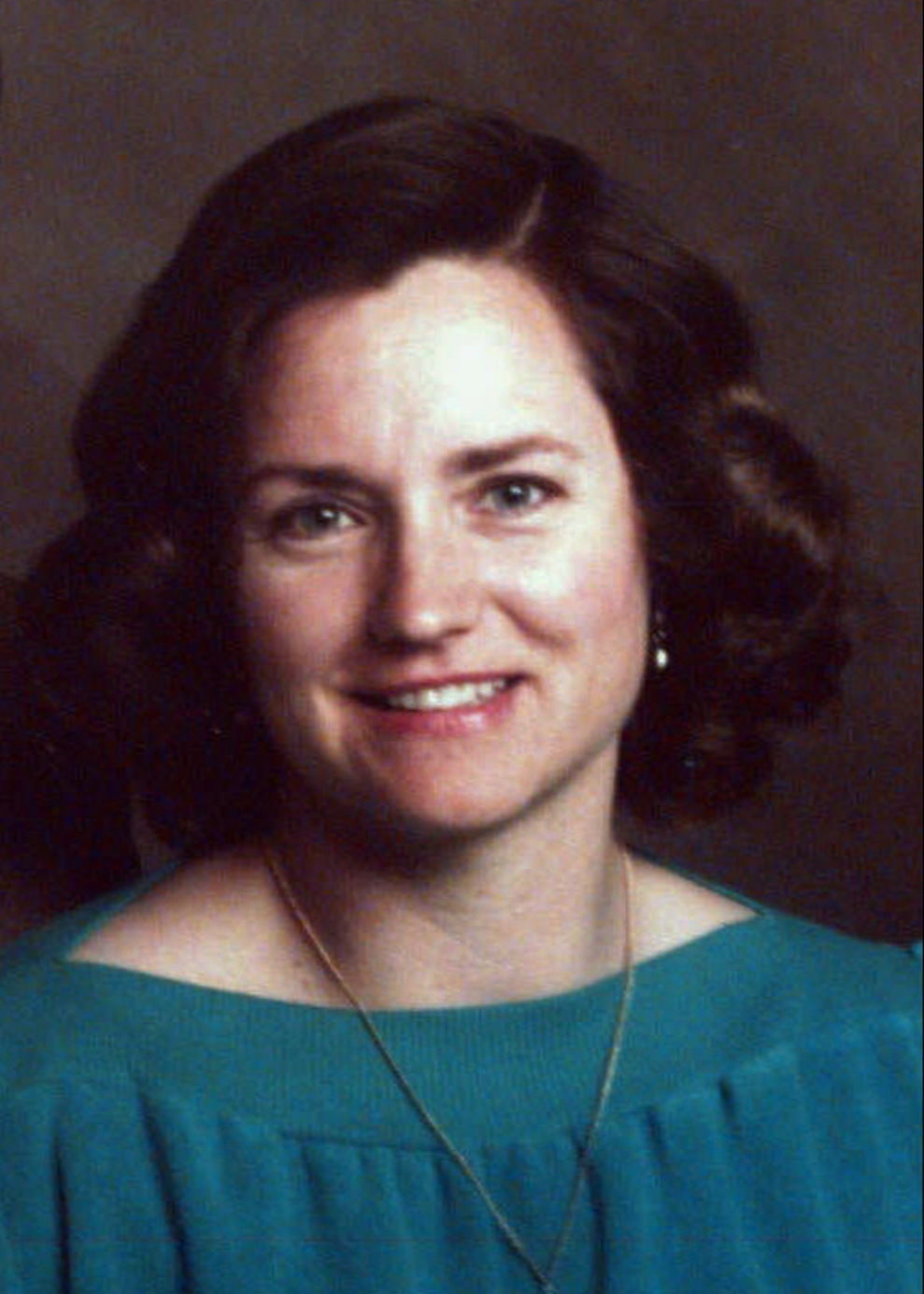 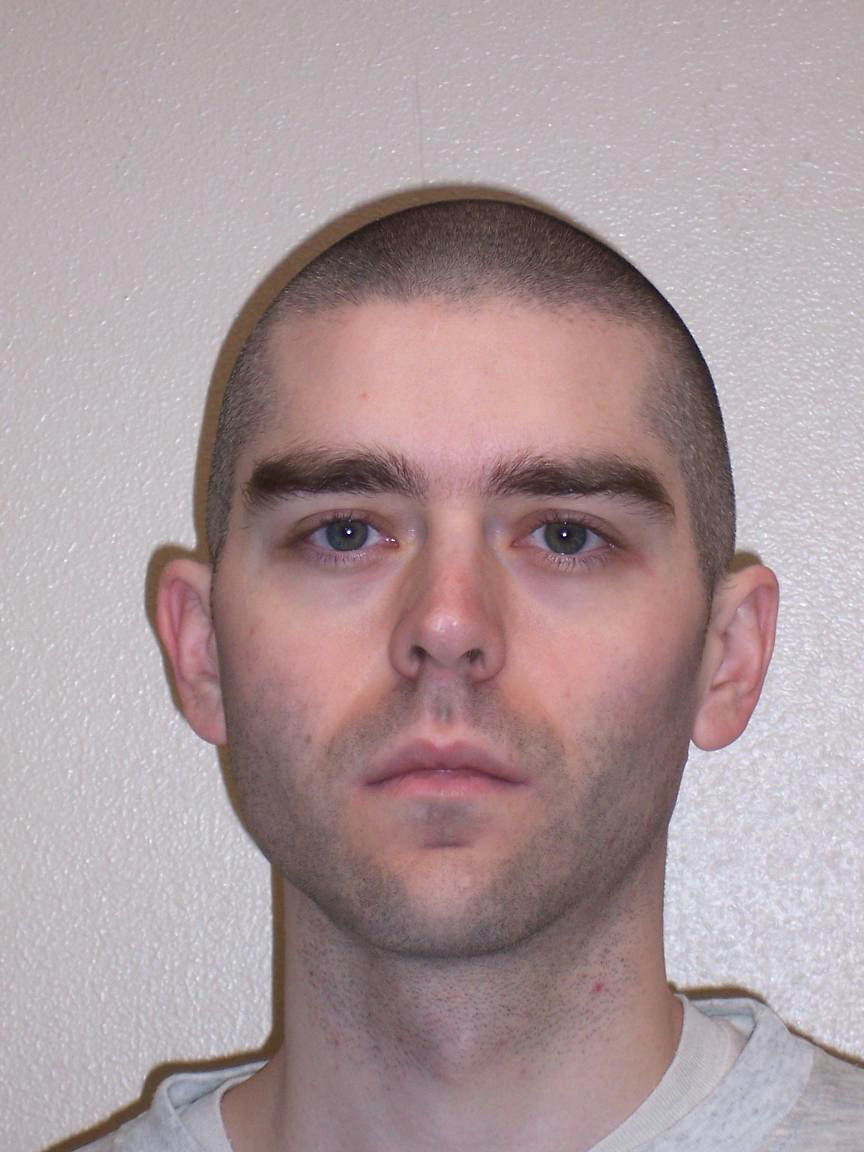 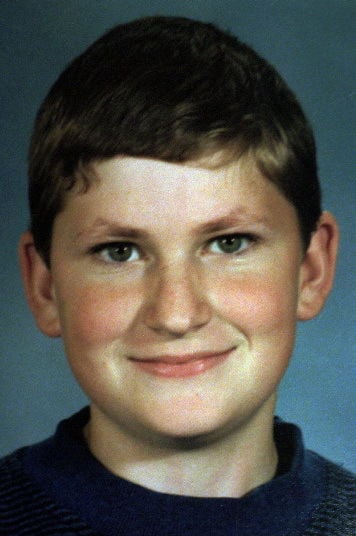 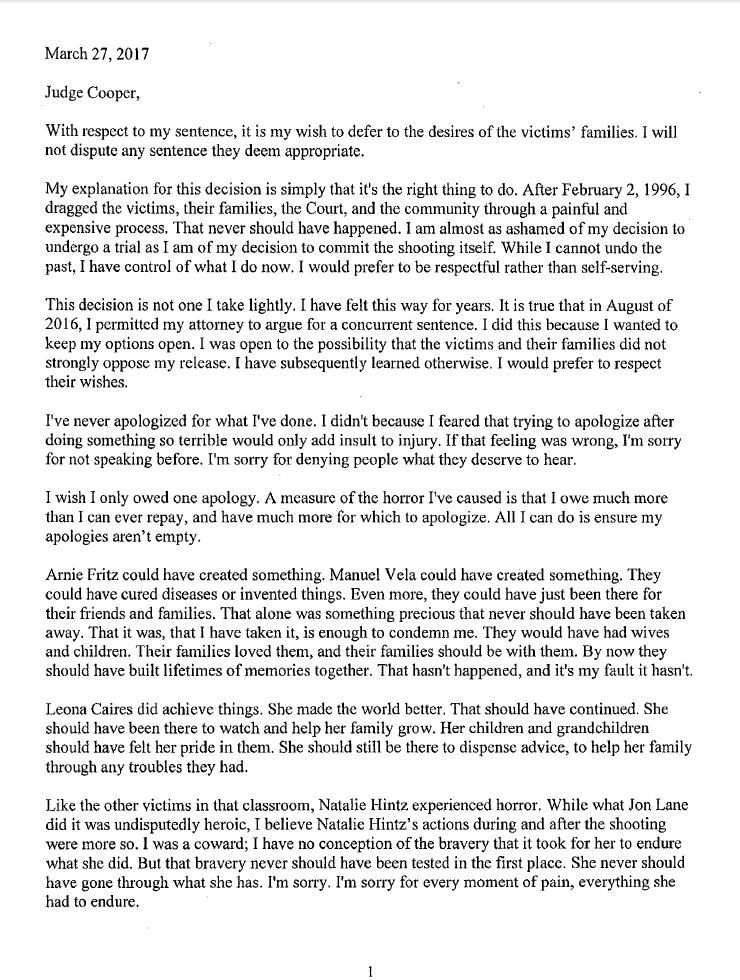 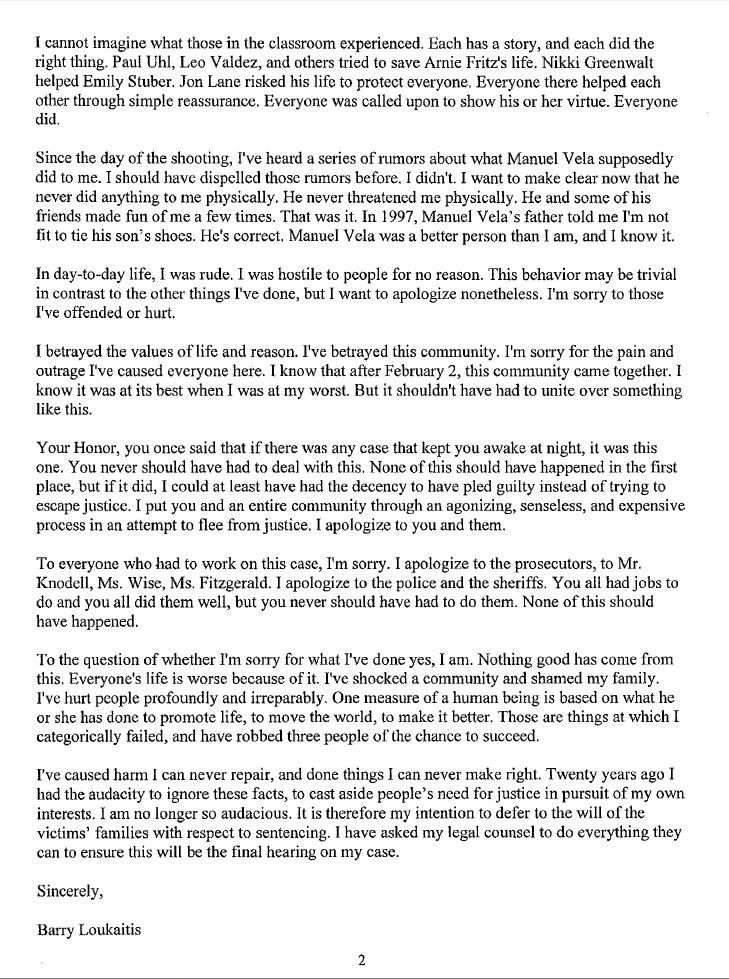 EPHRATA — Barry Dale Loukaitis, who at 14 murdered two fellow students and a teacher at Moses Lake's Frontier Middle School in 1996, will not plead for leniency at his court-ordered resentencing next week, saying in a letter that he will "defer to the desires of the victims' families."

In his letter filed April 3 in Grant County Superior Court, Loukaitis also for the first time offered apologies for the shootings, in which he gunned down algebra teacher Leona Caires, 49, and students Manuel Vela and Arnie Fritz, both 14, and held his classroom hostage.

"I wish I only owed one apology," Loukaitis, now 36, wrote. "A measure of the horror I've caused is that I owe much more than I can ever repay, and have much more for which to apologize."

Loukaitis, who was convicted of the three murders in 1997 and sentenced to two life terms plus 205 years, must be resentenced under a U.S. Supreme Court ruling. The 2012 decision in Miller v. Alabama found that juveniles cannot be sentenced to life without parole. As a result, Washington amended state sentencing laws, forcing courts to revise prison terms for many offenders sentenced to life as juveniles.

Defendants resentenced under the Miller ruling have the right to offer mitigating circumstances, arguing for lenient prison terms. Loukaitis' defense attorney, Michele Shaw of Seattle, said in court filings he will waive that right. She wrote that she believes "what Mr. Loukaitis has elected to do is without precedent among Miller defendants in the country."

The resentencing is scheduled for Wednesday in Ephrata before Kittitas County Judge Michael E. Cooper, who handed down the original sentence after a five-week trial, and emerged from retirement to preside over the matter. About 15 victims or survivors of Loukaitis' rampage have asked to speak at the hearing, where they may argue for strong sentencing terms.

Loukaitis has no chance of leaving prison. For each of his two first-degree murder convictions, for his classmates' deaths, the judge may assign a term of no less than 25 years to a maximum of life. His third murder conviction, a second-degree count for the killing of his teacher, carries a 15- to 18-year sentencing range. The jury also found him guilty on 16 counts of kidnapping plus first- and second-degree assault, with minimum sentences for each ranging from eight to 12 years.

Sentencing in all but one of his charges must be served consecutively, according to prosecutors' memos filed with the court — adding up to at least 225 years in prison.

On Feb. 2, 1996, Loukaitis entered Frontier Middle School, where he was an enrolled student, carrying a hunting rifle and two handguns. He entered his algebra classroom, and fired on students, killing Vela and Fritz and injuring Natalie Hintz, 13, before shooting Caires in the chest. He then held the class hostage as police arrived.

Teacher Jon Lane entered the room upon hearing gunfire, assisted when Loukaitis agreed to release Hintz and another student, and offered himself as a hostage. When Loukaitis urged Lane to put the rifle barrel in his mouth, Lane seized the weapon and overpowered him, allowing students to flee. Lane held Loukaitis down until police entered the room and restrained him.

Loukaitis was tried as an adult, with the trial held in Seattle in an attempt to recruit an impartial jury. He offered an insanity defense, and prosecutors attempted to tie the murders to Loukaitis' consumption of mass media, including the Stephen King/Richard Bachman novel "Rage" and the film "Natural Born Killers."

At the time, the attack was the deadliest carried out by a minor in a U.S. public school since 1974, and the worst in Washington since 1985. Later the same year, five people died in school shootings committed by minors in Mississippi and Kentucky, and in 1998 youth gunmen killed a total of nine people in school-related murders in Arkansas and Oregon. In 1999, two students shot and killed 12 children and one teacher at Columbine High School in Colorado. All told since Loukaitis' assault, 51 people, including 40 students, have been gunned down by youth who attacked U.S. schools with firearms.

In his six-page handwritten letter to the court, dated March 27, Loukaitis apologized to the victims and acknowledged he had "hurt people profoundly and irreparably." He also wrote that Manuel Vela, allegedly targeted because he had bullied Loukaitis, "never threatened me physically. He and some of his friends made fun of me a few times. That was it."

"I betrayed the values of life and reason," he wrote. "I've betrayed this community. I'm sorry for the pain and outrage I've caused everyone here. I know that after February 2, this community came together. I know it was at its best when I was at my worst. But it shouldn't have had to unite over something like this."

A psychiatrist's assessment that accompanied Loukaitis' letter found him competent to undergo resentencing. Dr. Richard Adler also wrote that while Loukaitis showed signs of depression when interviewed in prison Dec. 9, he does not fit the characterization of "a remorseless, cold psychopath."

Since his incarceration, Loukaitis has achieved his high school diploma and worked as a teacher's aide in inmate education programs at Clallam Bay Corrections Center. He's now housed at Coyote Ridge Corrections Center in Connell, and scheduled to be transferred to Grant County next week.

"It is Mr. Loukaitis' hope that this hearing will not be adversarial in nature, and that there is finality to this process for the victims and surviving family members," Shaw wrote to the court.