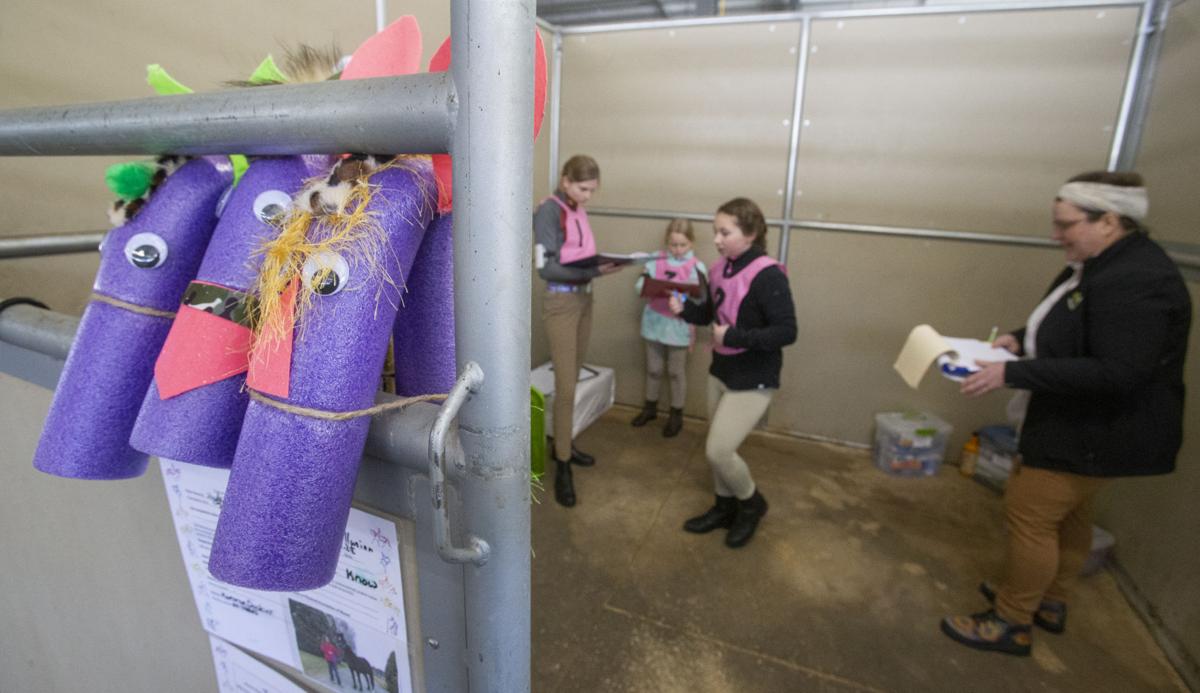 As their noodle ponies look out from the stall, members of the Sun Basin Pony Club of Moses Lake work Saturday with Jonelle Thyssen, the chief horse management judge at the Horseless Rally at Appleachee Riders in Wenatchee. 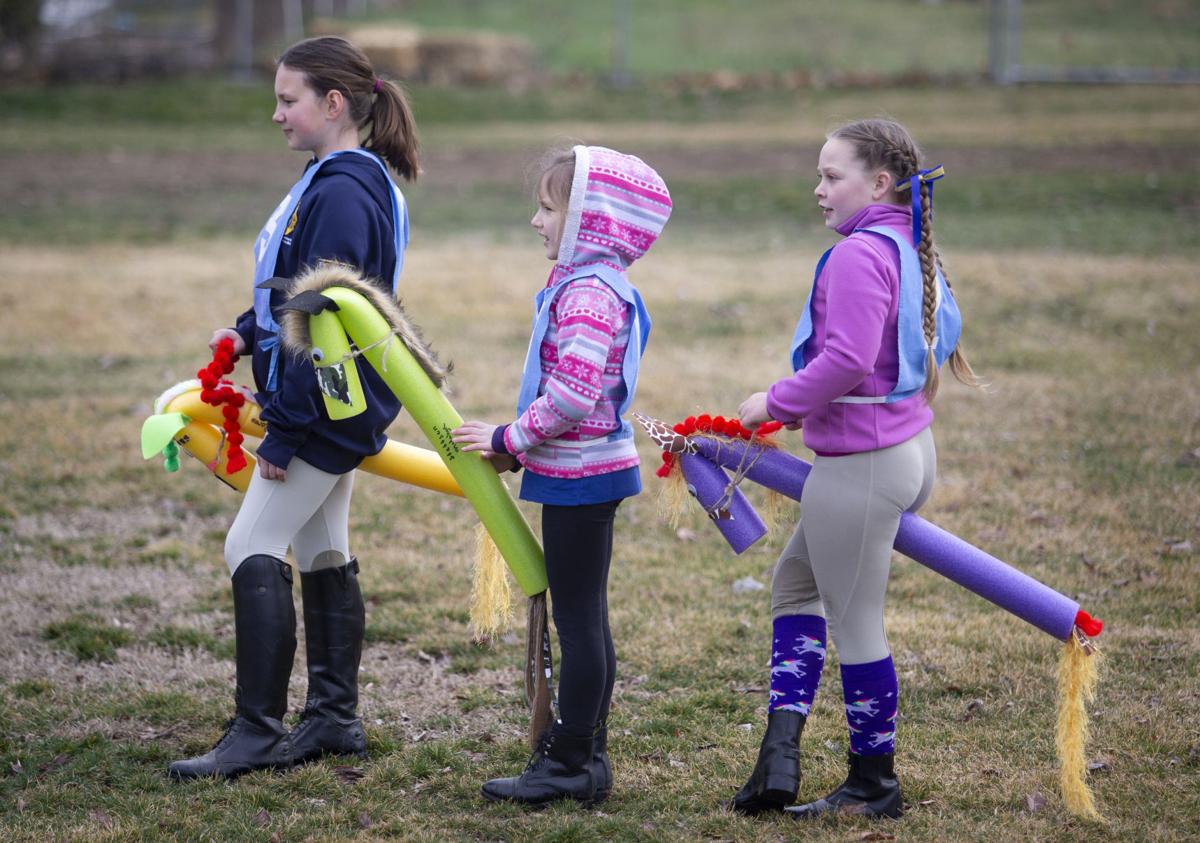 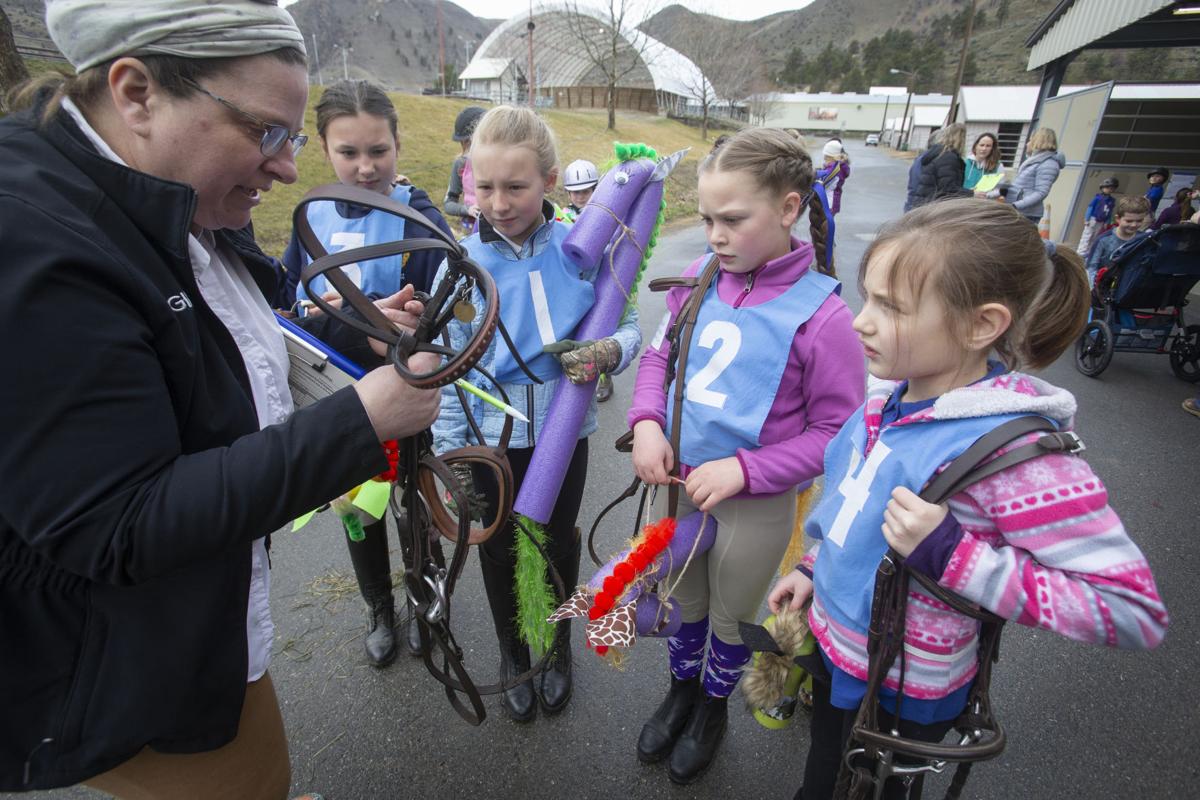 Judge Jonelle Thyssen inspects a member of the Horse on Course Pony Club’s bridle to make sure it’s safe. 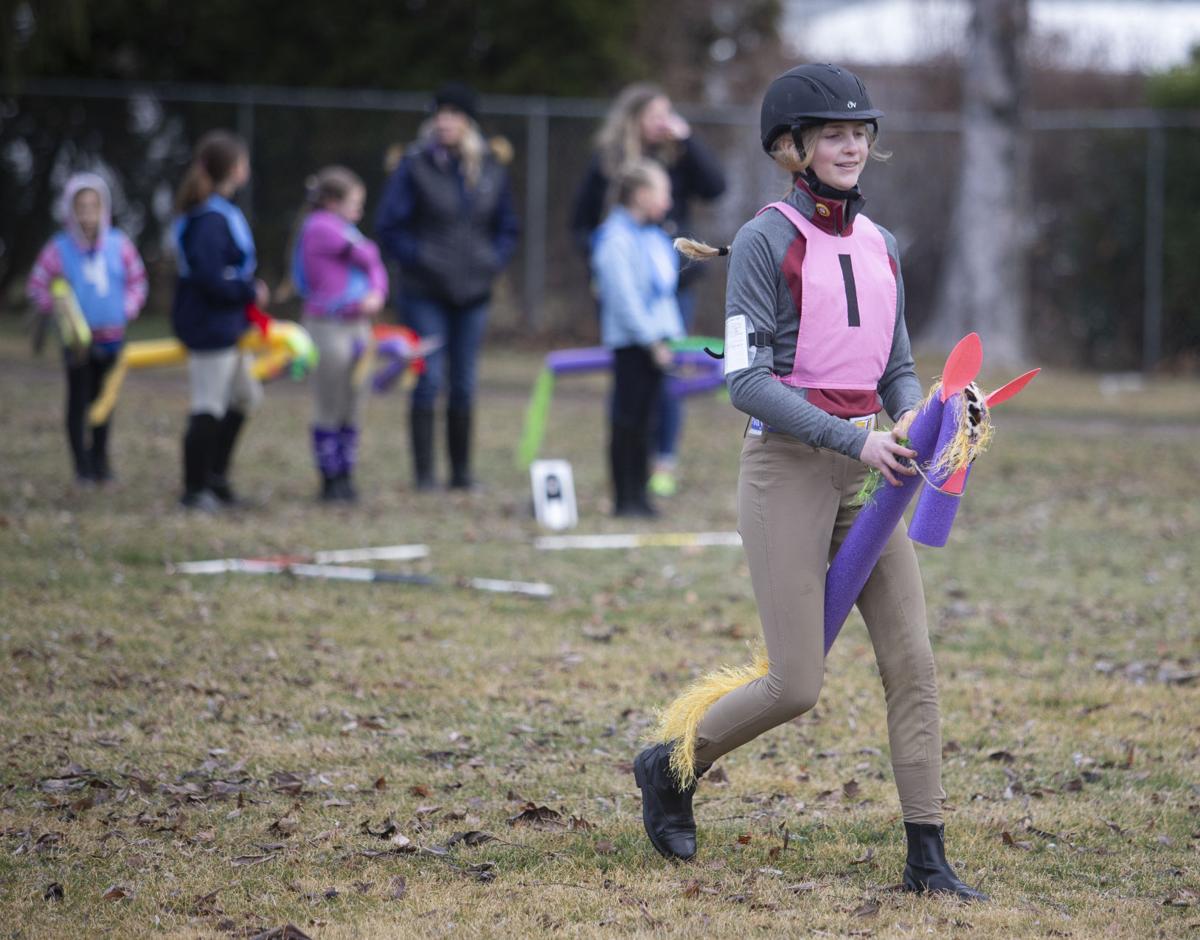 As their noodle ponies look out from the stall, members of the Sun Basin Pony Club of Moses Lake work Saturday with Jonelle Thyssen, the chief horse management judge at the Horseless Rally at Appleachee Riders in Wenatchee.

Judge Jonelle Thyssen inspects a member of the Horse on Course Pony Club’s bridle to make sure it’s safe.

WENATCHEE — They had eyes, ears, manes and tails, but instead of the typical brown, black or white, these horses were purple, yellow or green.

Made out of swimming pool noodles, the ponies helped young riders get a better handle on competitions before bringing in the real thing.

“When you put in a 500 to 1,000 pound animal with these kids, it gets stressful,” Dawn Milne said. “So let’s learn about it before we put in that next element. ...This is called ‘everything but the horse.’”

Milne is a member of the Appleatchee Riders, whose facilities hosted a horseless rally Saturday in Wenatchee. She also supervises the United States Pony Clubs’ region that includes Eastern Washington and parts of Oregon and Idaho and belongs to Wenatchee’s Horse on Course Pony Club.

Children from the Wenatchee, Moses Lake and Spokane clubs attended the rally.

“If we were in competition, then we would know what to do because they already taught us with fake horses,” said Madalyn Hanshew, 7, of East Wenatchee. “If we’re on fake horses, then it wouldn’t hurt the horse if we did something wrong.”

Ella Nes, 10, of Wenatchee, and Paislee Landon, 9, of Waterville, both said their mothers introduced them to horseback riding and they’ve continued it their whole lives.

“I was basically born on a horse,” added Annalise Grassell, 9, of Wenatchee.

Annalise’s mom, Suzanne, said she was in 4-H as a child but put her daughter in Pony Club because it accepts younger members. She said it’s an opportunity for Annalise to learn more about something she loves.

“She has the opportunity to do public speaking. She has the opportunity to learn safety practices and a lot of responsibility,” Grassell said. “She can groom and tack up her own horse. ... Nine years old and she can do all these things by herself that she’s had to learn through Pony Club. She is really responsible, cleans up after her own horse, knows how much to feed — all of that just because she’s had to learn that through this club.”

Along with teaching responsibility, she said, the club boosts self-esteem.

“For little girls and horses, when they can manage a horse like that and have a partnership with a horse, it gives them a lot of confidence to deal with whatever might be going on at school or friends or whatever,” she said.

Grassell was a judge in Saturday’s rally, as was Emily Nes, Ella’s mom.

Nes said this was the area’s first horseless rally in two years. There was an exercise where children answered questions related to horseback riding and took a jump for each correct response, and there was also a riding test called dressage.

“Dressage is kind of the ballet of horse riding,” Nes said. “It’s all about the connection between horse and rider and their movements. This is the very lowest test they have for the United States Dressage Federation. It’s just walk and trot. Usually you would be judging on the horse and rider and the connection between them, making the movements when they should, stuff like that. In this case, we are more looking at if the girls understand the geometry of it.”

Nes said she and her daughter joined the Horse on Course Pony Club a little over two years ago. She said members become friends for life.

“Pony Club is just so very good at really focusing on quality of character, quality of your horse care and teamwork,” she said. “That’s what got me going.”

Community housing trust gets startup funds, looks at next steps