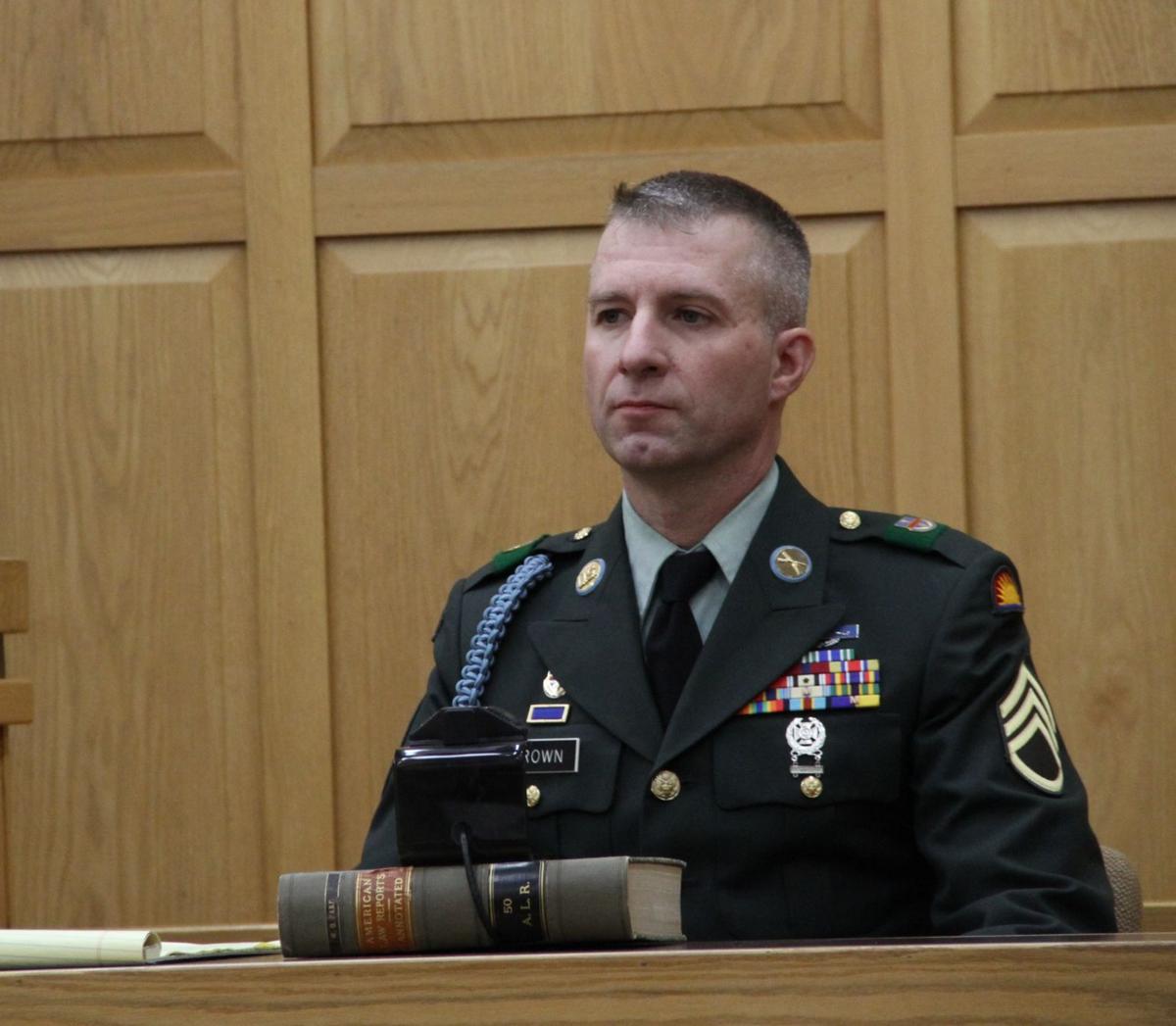 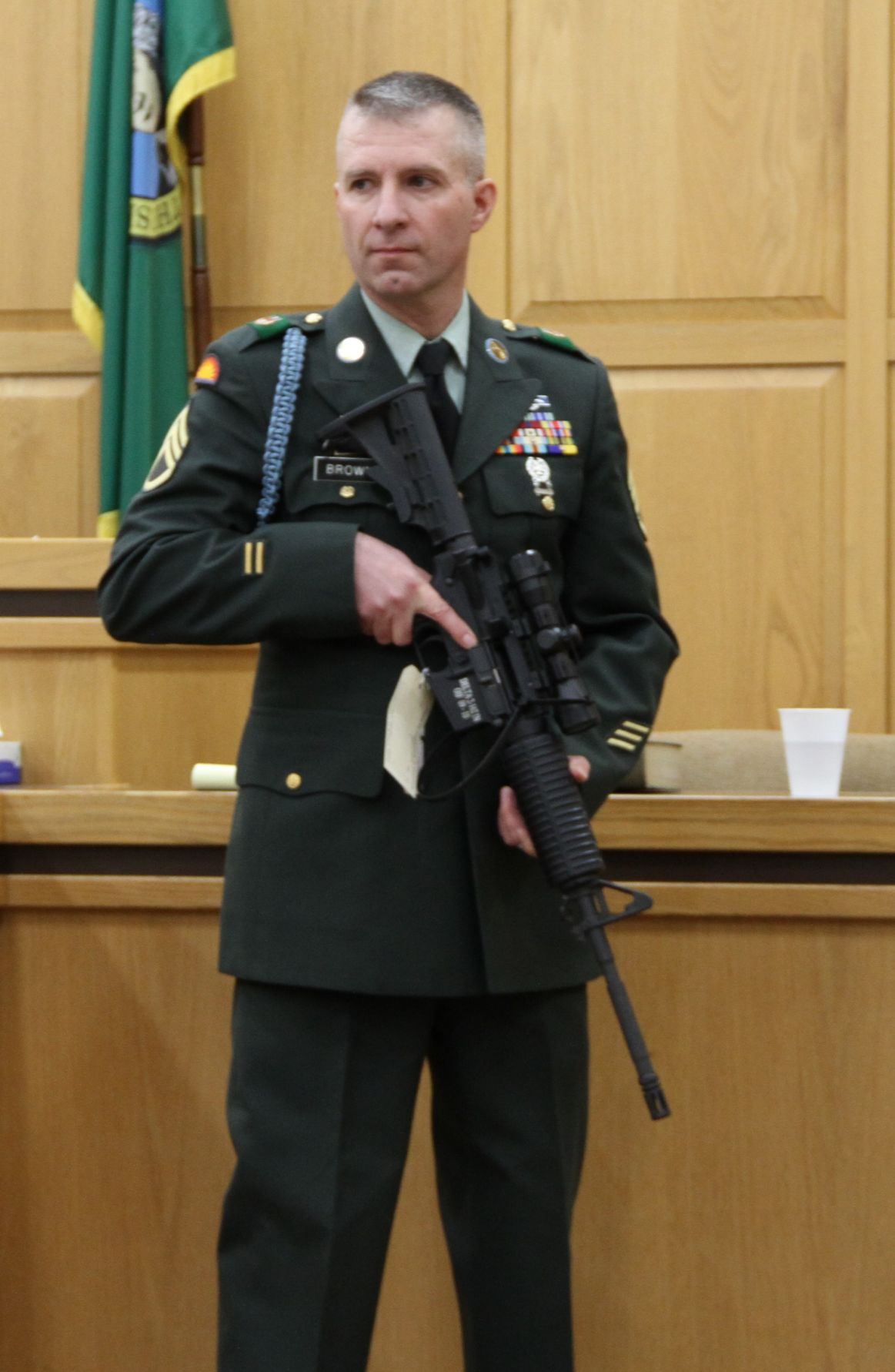 James Carl Brown holds his M4-style rifle at the low-ready position Thursday in Chelan County Superior Court. He said this is the position he held the rifle during his confrontation with BNSF Railway employees on Oct. 23, 2018.

James Carl Brown holds his M4-style rifle at the low-ready position Thursday in Chelan County Superior Court. He said this is the position he held the rifle during his confrontation with BNSF Railway employees on Oct. 23, 2018.

LEAVENWORTH — Charged with eight felonies and facing 25 years in prison, James Carl Brown bet on himself last month and won.

The 45-year-old Army National guardsman fired at least three warning shots in October 2018 while trying to remove a BNSF Railway crew from the Chumstick Highway property where he lives.

Chelan County prosecutors charged him in superior court with four counts of second-degree assault and four counts of unlawful imprisonment. Brown, unwilling to admit to crimes he doesn’t believe he committed, demanded a trial.

The crew was working on a dismantled railroad crossing next to the property. They parked at the end of the property’s driveway, but Brown wanted them to stay on BNSF right-of-way. When they attempted to leave by heading out the driveway, Brown fired.

He said the truck nearly hit him. The crew said otherwise.

A jury on Dec. 13 found him not guilty of all counts.

Now more than a month removed from trial, Brown is readying for a potential deployment to Kosovo, Serbia, with the Oregon Army National Guard. He lost his security clearance during the case and is scrambling to renew it in time. If not, he won’t deploy.

The Wenatchee World posed several questions to Brown, who answered by email from Oregon where he was participating in military training. In regard to the incident, Brown declined to say whether he’d do anything differently. Here’s a lightly edited version of the email conversation:

How did the case affect your life for the 14 months it was active?

What effect has this case had on my life? I was portrayed as a criminal standing before court in orange pajamas; I’m out $1,000 that I was required to pay to a bail bondsman; my legal costs were $15,000; my reputation was smeared by the media; I lost horse clients in my business; I had to carry a “rubber rifle” while on military duty (due to the weapon prohibition mandated by the court); my military security clearance was significantly delayed; I could not attend any military schools (a completed rifle score/individual weapon qualification is required for record); I could not be promoted; and I could not be deployed while pending charges. Most nights, my wife and I laid awake in bed wondering about our future... and praying for God’s hand to intervene.

I was only able to get through these trials and tribulations because of the support of my wife, my family, my church, my military leadership, and my weak (and sometimes doubtful) faith that Christ would present justice in this matter. Jeremiah 29:11 says, ‘”For I know the plans I have for you,” declares the Lord. “Plans to prosper you and not harm you, plans to give you a HOPE and a FUTURE.”’

Why do you think the jury decided in your favor?

I believe there are still good people in this world; people who see the truth in matters. This was not a matter of “an active shooter” that has gone berserk and is murdering individuals in a movie theater or a school. This was a “self defense” matter that occurred in the middle of the night, on the property where I live, and where I was able to employ less-than-lethal measures to resolve the situation.

Did the prosecutor’s office offer any plea deals?

There were two different offers of plea deals at different times.

The first was presented by my initial court-appointed attorney, Jeremy Wallace. Mr. Wallace informed me (prior to the initial trial date this last summer) that the prosecutor would likely be willing to reduce the charges to a single felony count of (third-degree assault). I declined the offer.

The second was presented by my private attorney, Nick Yedinak. Mr. Yedinak informed me just prior to the December trial that the prosecutor would likely be willing to reduce the charges to four misdemeanor counts of (fourth-degree assault) with no jail time. Again, I declined the offer.

I could not bring myself to enter into a deal for my personal freedom in exchange for an admission of guilt for a crime I never committed.

One of the Army values is “integrity.” Where would my integrity be if I agreed to trade a lie for my own freedom? How could I say that I am willing to fight for freedom, liberty, Constitutional rights, and the American way of life if I am willing to trade my signature on a piece of paper in exchange for a court’s decision to grant said freedom?

(Editor’s note: Deputy Prosecutor James Hershey told The World there was never a formal offer of four counts of fourth-degree assault because Brown made it clear he didn’t intend to accept any plea offers.)

Did you celebrate at all?

I didn’t celebrate, per say. I wasn’t in much of a celebrating mood. More so, I felt a sense of relief that my wife’s husband would not be escorted to a cell that afternoon.

What continues to bother me is a social shift in our American society where some now believe that self defense — defense of self, defense of others, defense of property — is no longer “an inherent right.”

Some friends of ours offered to take us out for some Mexican food. We accepted.