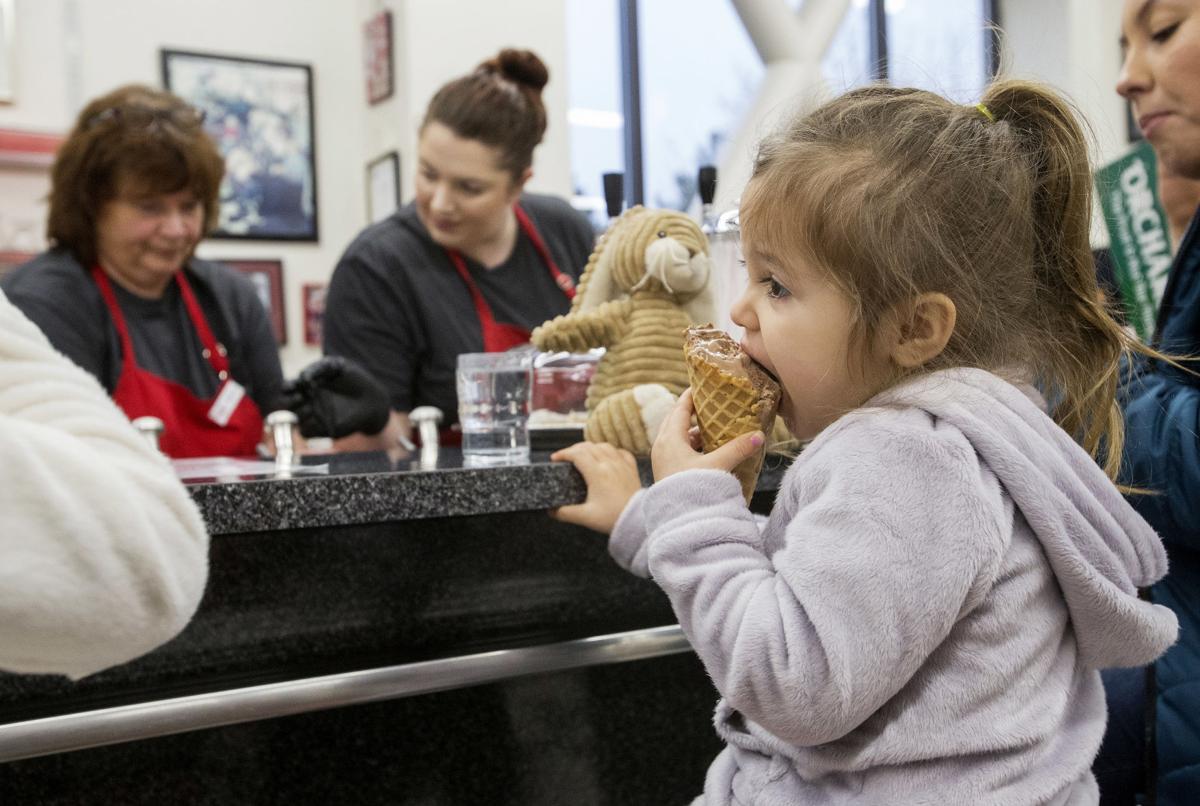 The Owl Soda Fountain & Gifts may have changed ownership, but customers like Olivia Shugart, 3, Wenatchee, get to enjoy their treats. Thursday was the first day of business for new owner Kelsey Alvarado, center, and her mother DeEtte Stofleth, left. 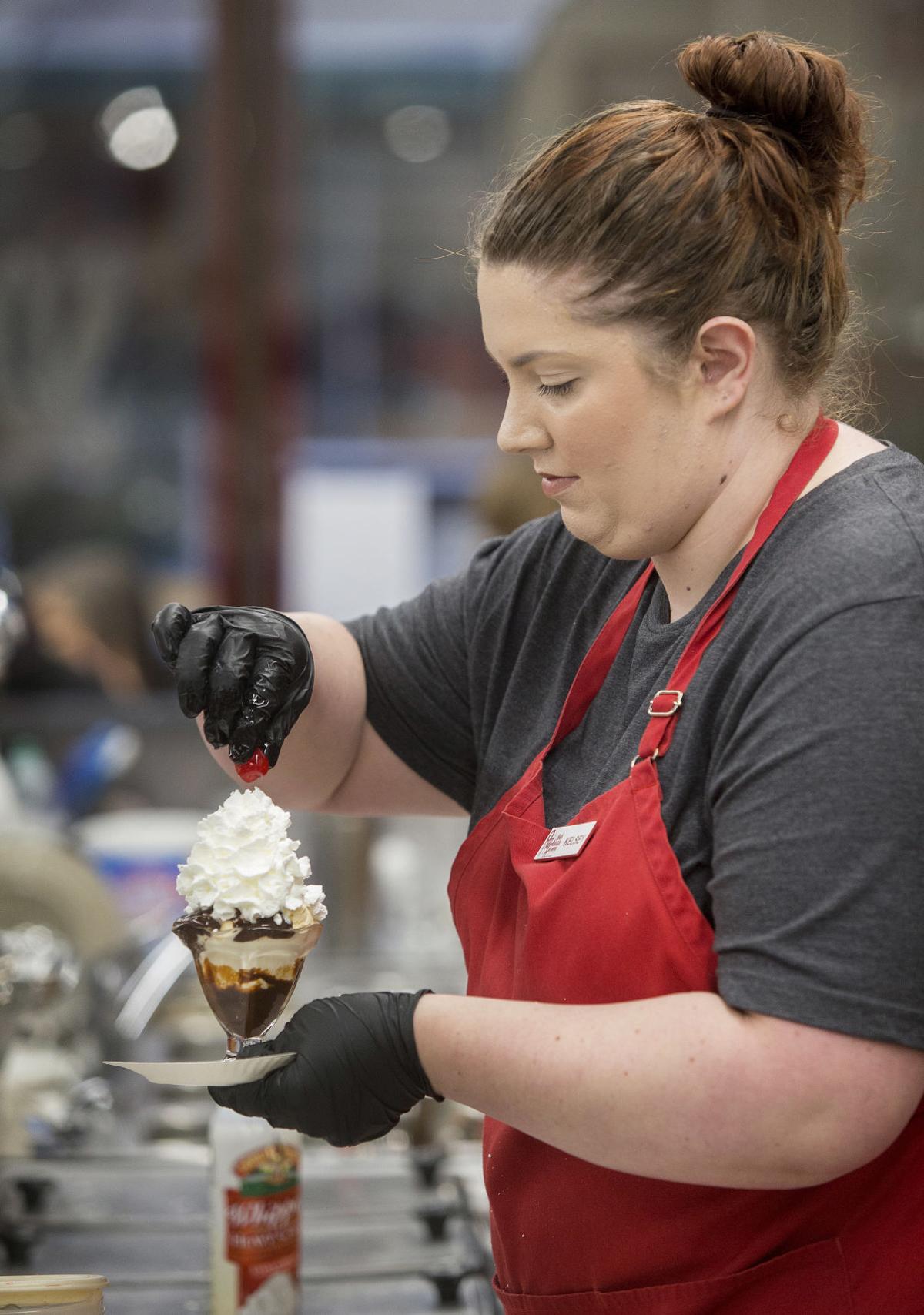 New Owl Soda Fountain & Gifts owner Kelsey Alvarado puts a cherry on top of a sundae as she serves customers on Thursday. 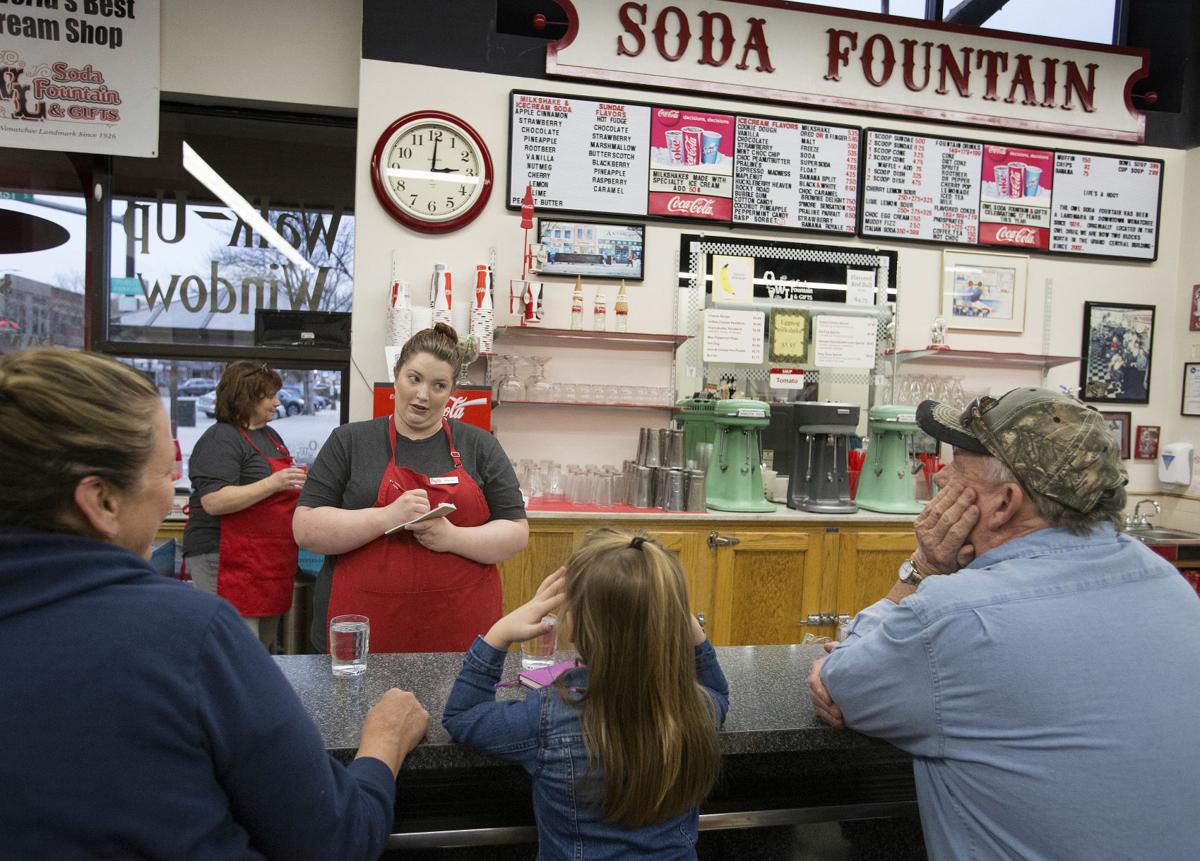 The Owl Soda Fountain & Gifts may have changed ownership, but customers like Olivia Shugart, 3, Wenatchee, get to enjoy their treats. Thursday was the first day of business for new owner Kelsey Alvarado, center, and her mother DeEtte Stofleth, left.

New Owl Soda Fountain & Gifts owner Kelsey Alvarado puts a cherry on top of a sundae as she serves customers on Thursday.

WENATCHEE — Kelsey Alvarado first visited Owl Soda Fountain & Gifts on a date with her husband in 2018.

“He and I were sitting on the end of the counter here and I said ‘I would love to own a place like this someday.’ I didn’t know the owner was standing right in front of me,’” Alvarado said Thursday.

Alvarado’s dream came true Wednesday when she took over as the new owner of Owl Soda, which has offered sweet treats in downtown Wenatchee since 1926.

She opened for the first time Thursday. It was a weekday in the dead of winter, but the shop was buzzing.

“People come in here for their guilty pleasures and they don’t hold back,” she said. “I’ve made three banana splits today and a giant caramel-chocolate brownie delight.”

It all stemmed from that conversation Alvarado had in 2018 with the shop’s previous owner, Pam Higgins, who operated it with her husband Frank since 2002.

The pair took Alvarado out to dinner to discuss what it takes to run the shop, which is on the corner of Wenatchee Avenue and First Street.

“She was like ‘Let’s get you in here to work so you can decide if you still love it,’” Alvarado said.

Alvarado was working full-time at Cafe Columbia in Pybus Public Market and had years of experience as a chef, but running an ice cream parlor requires a different skill set, she said.

“For me it was hard because I’d never done ice cream before. I’m a chef so I’ve done food and I’m a pastry chef so I do baked goods too, but I’ve never worked in a place where I had to do milkshakes all day,” she said. “It was definitely a learning curve.”

She kept her job at Cafe Columbia and worked Wednesdays at the soda fountain for several months. Then in November she came to the shop full time, preparing to take it over.

“Pam decided to tell me ‘Quit your other full-time job and come here full time to learn it for real,’” she said. “That’s when my eyes opened. I’d never really been here 24/7 and seen during Christmastime how many people came here just wanting gifts wrapped.”

Alvarado’s mother, DeEtte Stofleth, retired from the U.S. Forest Service this week and came to help Alvarado run the shop.

“When she started having this brainstorm, I said ‘You can’t do this on your own. You should wait until I retire,’” Stofleth said Thursday. “I retired Tuesday and I’m here today.”

Alvarado plans to expand the shop’s offerings, but the core soda fountain menu items will stay, she said.

“There’s still a few things we have to get in here before we move forward. But come March, we’ll have a few new menu items rolling out,” she said. “The fountain itself will stay the same. I might add a few sundaes. But my focus will be food and pasties, bring in some different things on that side.”