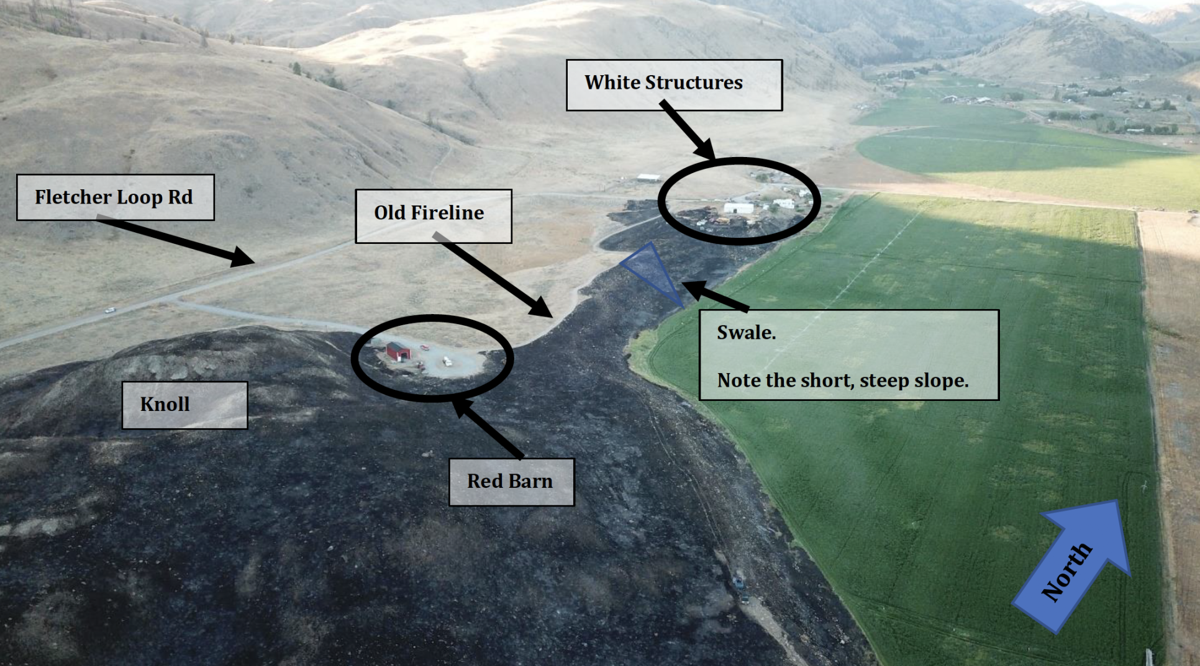 Assistant Chief Christian Johnson was fatally injured on a bend in the road between the red barn and the white structures labeled on this map, which was included in the facilitated learning analysis report. 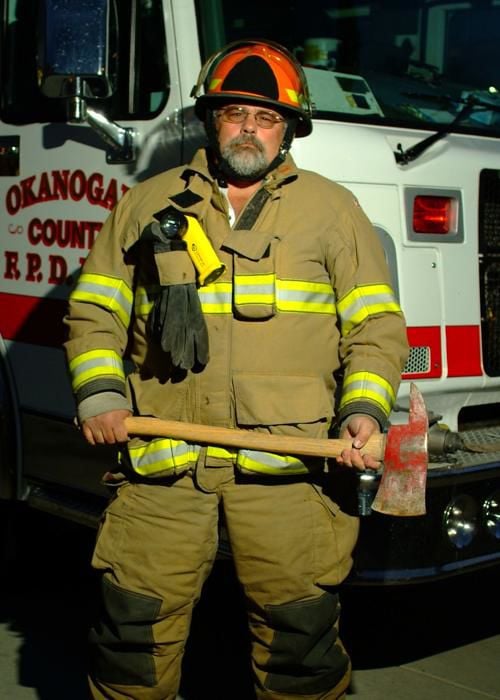 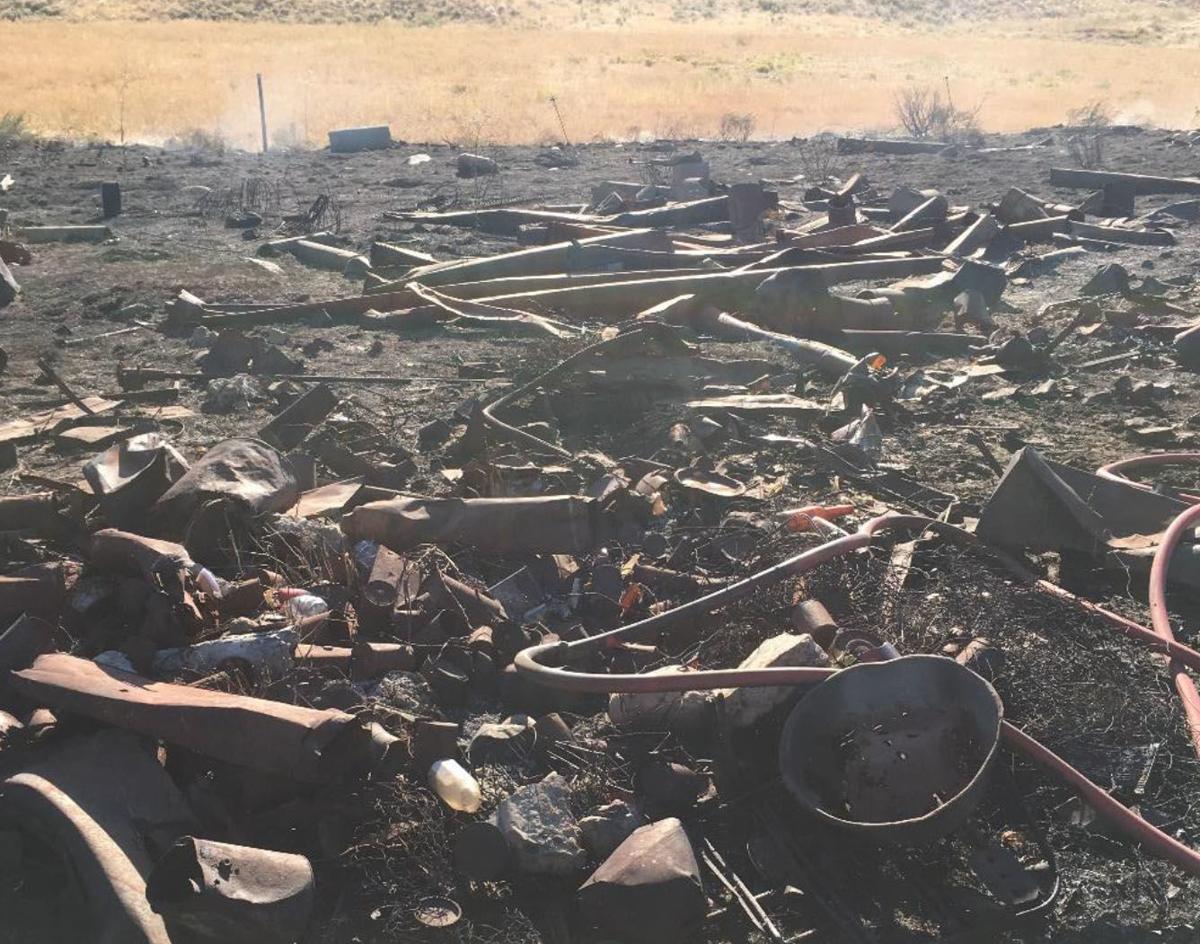 Investigators believe this area filled rocks and debris could have caused Christian Johnson to become "entangled," according to a facilitated learning analysis report. The field would likely have been covered in vegetation before the fire.

OKANOGAN — The Spring Coulee Fire was estimated to be the size of a basketball court when it was first reported at 3:59 p.m. on Sept. 1, 2019.

Seven minutes later it was estimated to be the size of a football field. Three minutes after that evacuations were issued, flames were around 10 feet high and the fire had burned 5 to 10 acres.

Seventeen minutes later, at 4:26 p.m., a call came over the radio that a firefighter was “down at the head of the fire.”

The fire’s rapid growth was one of several factors that contributed to the serious injury and subsequent death of Okanogan County Fire District 3 Assistant Chief Christian Johnson, according to a report conducted by state firefighting agencies.

The report, called a facilitated learning analysis, was conducted to determine what lessons could be learned from the incident.

It provides the first detailed account of how Johnson was “overtaken by fire.” He died of his injuries just over a month after the fire.

Some were highlighted as positives — emergency medical personnel were well-positioned to treat Johnson’s injuries almost immediately, according to the report. Responding agencies also communicated well over the radio with each other and air support.

Other elements, including planning for equipment failure and a lack of personal protective equipment, were highlighted as improvement areas.

In general, the recommendations suggested firefighters use the incident as a learning opportunity for future fires.

“The decision to develop and share the incident story was not made lightly. Ultimately, personnel involved in the incident, fire managers, and the family and friends of Assistant Chief Christian Johnson undertook this process to honor the life of a man deeply loved,” read part of the report. “We share this story and the emergent lessons in the spirit of growth from tragedy — we honor through learning.”

The report was initiated by Okanogan Fire District 3 and the state Department of Natural Resources, according to the document. On Jan. 31 it was uploaded to the website of the Wildfire Lessons Learned Center, a national company that strives “to improve safe work performance and organizational learning for all wildland firefighters,” according to its website.

The following timeline of events comes from the 32-page report.

Johnson’s involvement with the fire began as he was coming home from a fishing trip. He was dropped off at the Okanogan Fire Department and geared up with other volunteer firefighters responding to the incident.

Most of the department’s firefighters were wearing structural projection clothing, called turnouts, “because structures were reported as threatened during the initial dispatch,” according to the report. Some of the other firefighters who responded to the incident wore brush fire-specific clothing.

Johnson put on his turnout pants, but stowed his jacket behind the cab of his modified Ford F450 brush truck. He responded in the truck with another firefighter, who wasn’t named in the report, to the incident.

After contacting the incident commander, Johnson’s truck began protecting a barn off Fletcher Loop Road south of Okanogan. At that point, “the fire was moving fast.”

Another brush truck arrived at the barn, so Johnson’s truck moved north along a trail toward other threatened structures.

Johnson stopped the truck at a bend in trail and the other firefighter began extending a hose line toward the fire. Then the wind died down momentarily before shifting directions.

“During this wind shift, the fire established itself on the slope below B341 and burned rapidly toward the truck,” read part of the report.

The other firefighter noticed the wind change and felt a heat wave coming toward him. Johnson yelled to him to drop the hose and the firefighter ran toward the truck.

Fueled by the wind shift and and the area’s topography, flame length increased from around 9 feet to 15 feet. It was spreading more than 150 feet per minute.

The firefighter reached the truck at the same time as the fire. The passenger mirror caught fire as he ran around to the driver’s side. He jumped onto the outside as Johnson attempted to drive away from the area.

After driving five or six feet, the truck “lurched” and came to a stop.

After the incident, the truck was determined to be operable. A low-oxygen code pulled from its sensor after the incident, non-engagement of four-wheel drive and softball-sized rocks in the area are all listed in the report as possible causes of its failure during the incident.

Johnson’s path took him into a field full of rocks and debris that was obscured by vegetation. His turnout jacket was still on the back of the truck.

“While it is impossible to know for certain, it is thought Assistant Chief Johnson may have become entangled in the debris and was overtaken by fire,” read part of the report.

As soon as flames cleared, the other firefighter made his way back to check on Johnson, who was found around 150 feet from the truck.

Medical personnel staged at the scene were able to treat him almost immediately and a medical helicopter was called three minutes after the initial “MAYDAY” call.

He was taken to Harborview Medical Center in Seattle, where he was treated for severe second- and third-degree burns on 50-60% of his body. Johnson died of his injuries a month later.

The lack of protective clothing on Johnson’s upper half, “likely contributed to the severity of his injuries,” read part of the report.

The report said Johnson was known as “Mr. Safety” and therefor it was unlikely that he consciously “made a decision to discard his turnout jacket for the entirety of the fire. It is more likely that small, micro-decisions — such as the choice not to wear a turnout coat while driving — played a role in the incident.”

Contained at 107 acres, the fire was relatively small and had light fuels on moderate terrain, according to the report. The temperature hovered around 90°F and the relative humidity was 19%. Winds were out of the south at approximately 15 mph with some gusts to 25 mph.

Many aspects of the Spring Coulee Fire were typical for the area, but they’re also common denominators of fire behavior on “tragedy fires,” according to the report.

The key is to pay attention to these common denominators and learn from them for future fires, according to the report.

“This analysis represents a commitment to all responders and to our community,” read part of the report. ”Through learning, we can improve our safe response to wildland fires.”