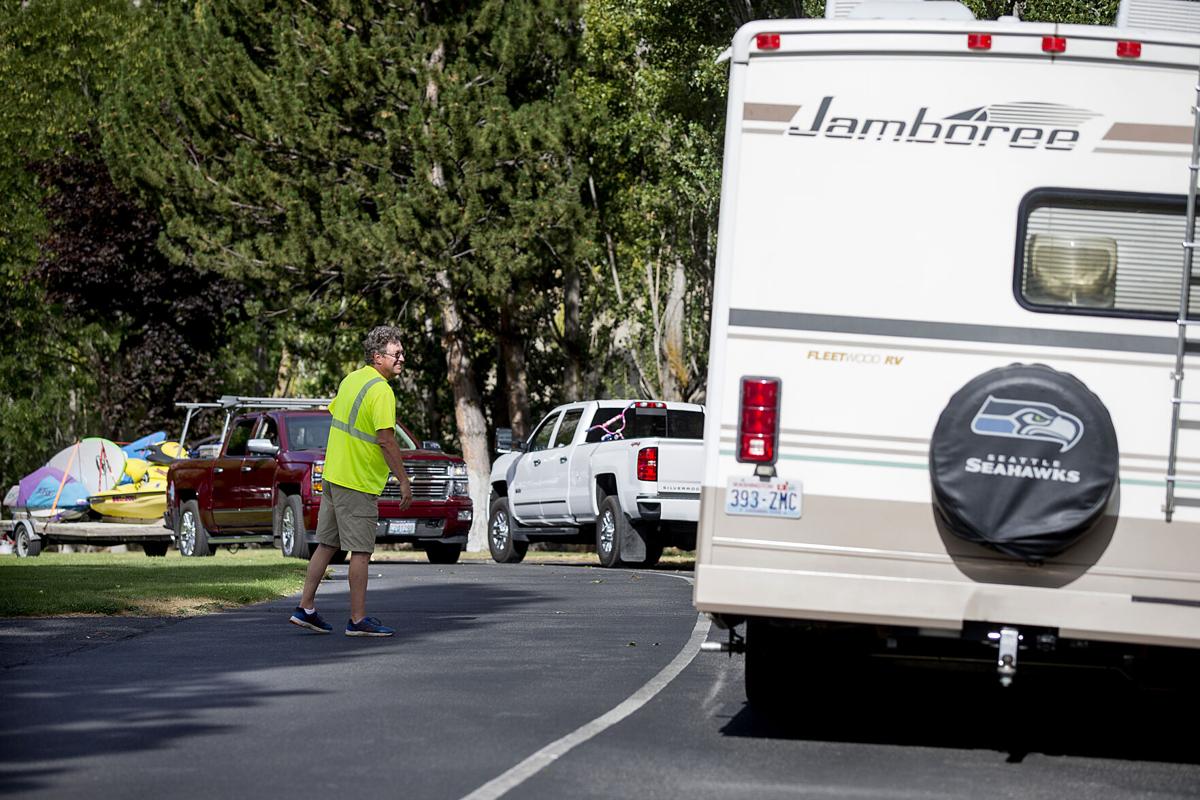 Rex Stratton talks to an arriving camper at Daroga State Park on Thursday. 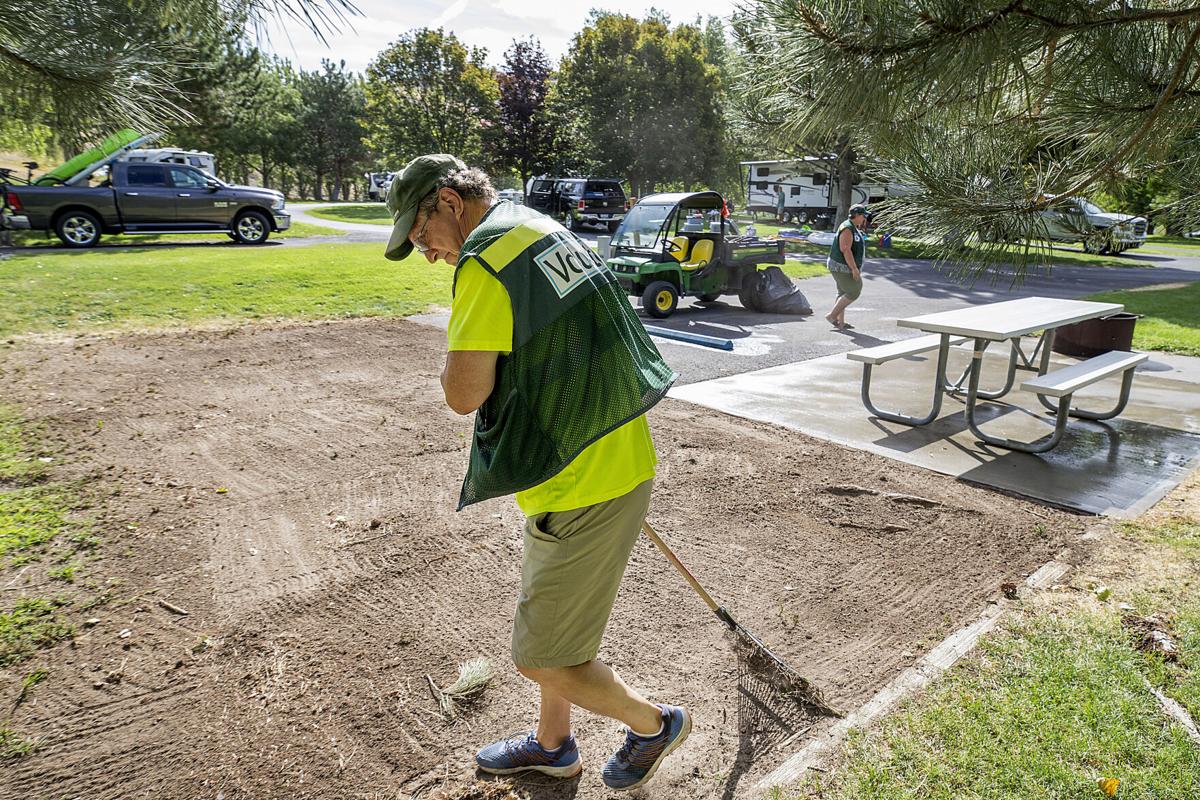 Daroga State Park hosts Rex and Marjie Stratton clean up a recently vacated camp site on Thursday. It's their fourth year of hosting the campground that includes 28 utility and 17 primitive sites.

Rex Stratton talks to an arriving camper at Daroga State Park on Thursday.

Daroga State Park hosts Rex and Marjie Stratton clean up a recently vacated camp site on Thursday. It's their fourth year of hosting the campground that includes 28 utility and 17 primitive sites.

“You can’t see them, so when I walk I get a reflection off (of) them and I pick them up,” Stratton said. “There’s a lot more garbage this year than there has been.”

Stratton is a volunteer park host for Washington State Parks, spending his summer months maintaining campgrounds, helping guests and tending arrivals and departures from the RV lots. Despite COVID-19 concerns, Stratton said this is the busiest he’s seen the park, with lots filled to capacity and day-use maxed each weekend, starting as early as Thursday.

“There are actually a lot of people that haven’t camped before,” Stratton said. Daroga State Park is located in Orondo, 23 miles north of Wenatchee on Highway 97.

With indefinite unemployment for some, increased options for remote working and a string of canceled plans, some Americans are choosing social distance by hitting the road. In May, the RV rental marketplace RVshare announced its highest-recorded booking numbers, with a 650% rental increase from the previous month. The RV Industry Association reported similar results, with a 10.8% rise in sales in June, the highest number of wholesale shipments since October 2018.

The trend has found its way to the Wenatchee Valley. All Seasons RV in Sunnyslope closed their storefront in March and April under the state stay-at-home order. Then, General Manager Shawn Rush worried they wouldn’t sell an RV this year. Now, Rush worries there won’t be enough RVs in stock to meet growing demands.

“It started off terribly,” Rush said. “But, from the same months last year we doubled ourselves. Because we lost the first couple of months, March and April, we still haven’t quite caught up to last year yet.”

Delays in manufacturing due to safety precautions have also caused an RV shortage, with demand higher than production. All Seasons RV started buying consignment to meet customer demands.

“We were really scrambling,” Rush said.

In June and July, Rush said about 90% of customers were first-time RV buyers. Trailers range from $7,500 to over $40,000 for new models, and motor homes can range from $50,000 to $150,000, according to Rush. The most popular style are the bunkhouse trailers that can accommodate sleeping arrangements for kids, according to Rush.

“I wish I had another dozen bunkhouse trailers sitting on the lot because most of the people that are going out camping are campers with kids,” Rush said. “If you see one, you like it, you better grab it.”

RV sales are considered a good indicator of the status of the economy since sales tend to parallel the Conference Board’s Leading Economic Index, according to The Atlantic, so much so economists have coined the term “RV Index.” Typically, consumers purchase RVs when they have ample spending money, time to travel and economic security to step away from work. Yet, America is currently in its worst recession since the Great Depression, according to The New York Times.

Lower gas prices are also appealing to those looking to take a road trip getaway. In Washington, gas prices are down 50 cents compared to this time last year, according to AAA.

After months of quarantine, some Americans are itching to get out and get fresh air. During a time when most recreation centers are closed or leisure events cancelled, most state parks and nature preserves remain open to the public as outdoor activities are safer than those indoors, according to the Center for Disease Control and Prevention.

A survey conducted by the Kampgrounds of America Inc. studying the effects of COVID-19 concerns on camping found camping to be the safest form of vacation among experienced campers and non-campers alike. The main reason cited by survey users was to escape home life for the fresh air and great outdoors.

About 46 million Americans plan to take an RV trip in the next year, according to RV Industry Association. About 20% of research respondents were more interested in RVs as a travel option in the aftermath of COVID-19, and 51% were already planning to take RV trips this year reported health concerns increased their interest in RV travel.

Most reservations for RV and camping sites at Washington State Parks have to be made nine months in advance, according to Velazquez, so most current reservations were booked in the pre-pandemic winter months, though some parks may show availability online. There have been some cancelations, according to Velazquez, but most were due to excessive heat.

“It’s still busy and if anything I think we might be a little bit busier because people are bringing extra people,” Velazquez said. “Most of (the sites) have been maximized” as RV campers bring more guests along for the ride up to the grounds’ eight-person limit, he said.

Even those in the RV business are having a tough time making reservations, but last-minute space at parks is still possible with a little work.

“The only way I got in was I called this morning at 9 a.m.,” Rush said. “I’ve been trying to get in somewhere all week long but it’s been a no-go. I called just at the right time this morning.”