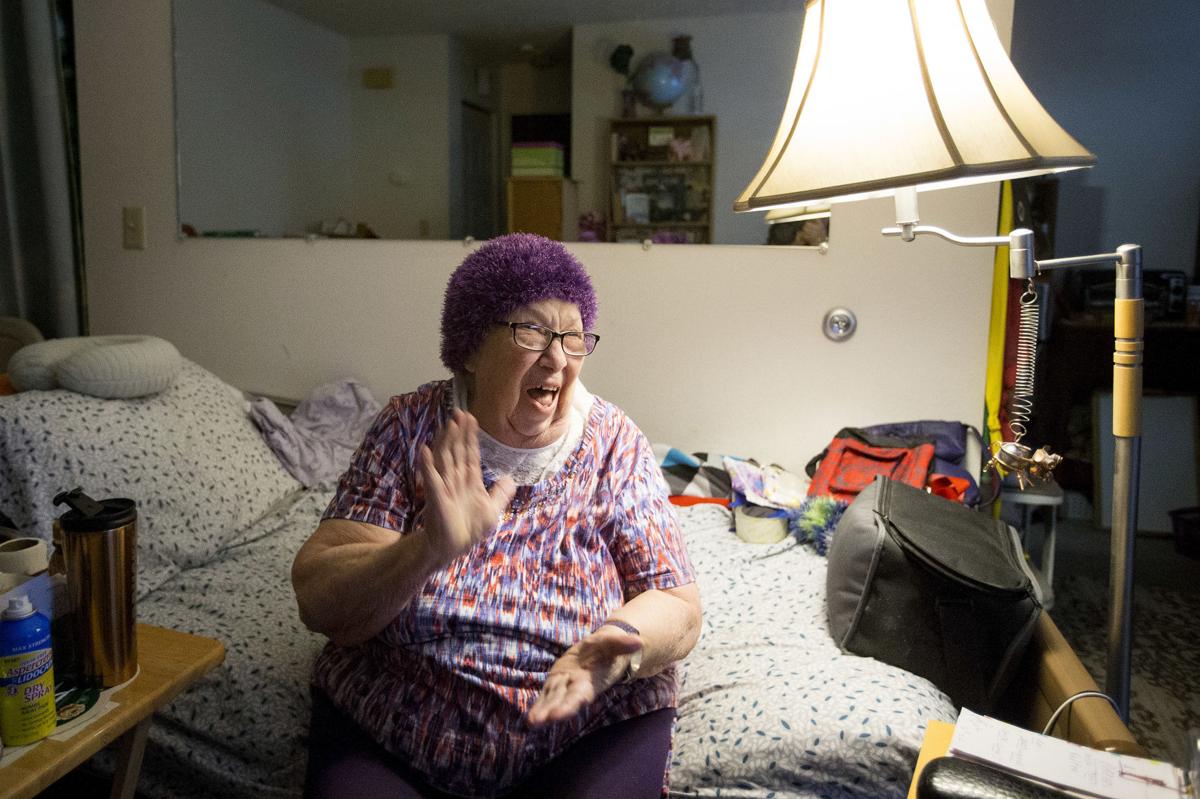 Neta Noyd, East Wenatchee, says she tries to have a positive outlook on life even though she faces a steep rent hike for the apartment she's lived in for 21 years. 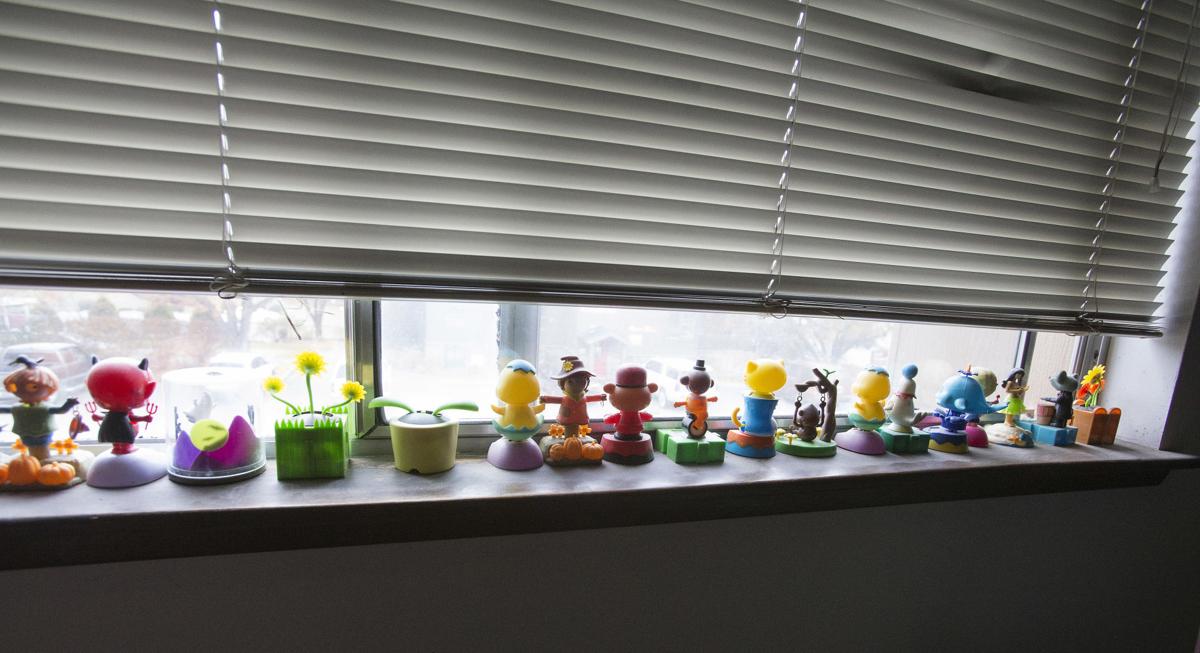 A self-described saver of things, Neta Noyd keeps a display of solar-powered toys that belonged to her son on her living room windowsill.

Neta Noyd, East Wenatchee, says she tries to have a positive outlook on life even though she faces a steep rent hike for the apartment she's lived in for 21 years.

A self-described saver of things, Neta Noyd keeps a display of solar-powered toys that belonged to her son on her living room windowsill.

EAST WENATCHEE — Soon after Neta Noyd moved into her East Wenatchee apartment in 1998, she had a hospital bed installed in her living room. She’d just had hip surgery and the lower bed offered easier access.

Twenty-one years and six surgeries later, Noyd still has the hospital bed — but her apartment is in jeopardy.

Noyd, 88, is facing a sudden, steep rent increase that’s sent her scrambling for another place to live. But in the midst of Wenatchee’s housing crisis, every low-income senior-housing facility she’s contacted is full.

Her complex, the Juniper Apartments, was purchased by an out-of-town management company in October. Noyd was told in early November that her rent will increase from $550 a month to $895 in January. The company couldn’t be reached for comment.

The new rent would eat up nearly three quarters of her monthly Social Security check — her only source of income.

Has your rent increased significantly? We want to hear your story

WENATCHEE — The Wenatchee Valley’s housing crisis has sent rental costs up and dropped vacancy rates around the region.

“It’s a hard one. (Seniors) are in a particularly bad spot because the housing costs are outpacing income increases for people that are on a fixed income, like people who receive Social Security,” he said last week.

At $895, Noyd’s new rent is still $231 cheaper than the average one-bedroom apartment rent in Chelan and Douglas counties, according to the University of Washington’s Runstad Department of Real Estate.

But on a fixed income, Noyd’s now looking for the subsidized housing types offered by the Community Action Council and other nonprofits. She’s already called more than a dozen places, she said. Then she called The Wenatchee World looking for help.

The problem is every place she called is full and has a waiting list with dozens of names. And since Noyd isn’t officially homeless, she doesn’t qualify for emergency rapid rehousing.

The Community Action Council offers several types of housing assistance, including emergency eviction protection, Bonwell said. But to qualify for that, Noyd would have to be within 14 days of eviction.

“Neta did not qualify for our services because she was not yet homeless,” she said. “So, that’s something that’s tricky is getting these prevention services in place in our community because there’s really long waitlists everywhere you go.”

That’s also what Noyd found when she called the Housing Authority of Chelan County and the city of Wenatchee to ask about the organization’s low-income senior units.

Both of the organization’s Wenatchee facilities are full — there are 182 people on the waiting list for one and 161 on the other list, Housing Authority Executive Director Alicia McRae said last Monday.

Since the lists themselves are at capacity, the agency stopped taking new names in June, she said.

The housing authority also maintains a list of private low-income housing options in the area. It provides that list to new clients as a courtesy.

All of the apartment complexes on that list that were contacted by The Wenatchee World said they had no vacancy. Four had waiting lists with over 100 names.

At the Cashmere Manor, a 24-unit complex for seniors, people have waited for up to four years to get an apartment, Manager Kit Shaw said last week.

“Senior properties tend to turn over less frequently because residents often get settled there, compared to, say, multifamily housing,” she said.

But Noyd doesn’t have months to wait on the list or save up for a new place. When January comes, she’ll have no choice but to pay the new rent, she said.

She’s asked the new owners, Ness Management of Mount Vernon, to delay the hike for a few months but hasn’t heard back from them, she said.The company didn’t respond to requests for comment.

The Wenatchee World spoke with four other tenants of the 32-unit apartment complex who also received a notice that their rent was going up to $895.

The same owners purchased apartment complex Valley Manor for $4.7 million in 2017, according to property records. Then in August of this year they purchased the Yakima Court Apartments in Wenatchee for $1.39 million.

They’re listed as owners of dozens of other apartment complexes in the state, according to the state Department of Revenue.

Noyd has seen her building change hands several times in her two decades there, she said.

“Each time somebody bought it, they changed (the rent,)” she said. “It’s gone up, up, up, up. Five hundred and fifty dollars was about the limit I could still exist. But with these new people, it was a big jump.”

A few months ago, Noyd started going to food banks, but she still lives with financial anxiety every day, she said.

“I think at almost 90 years old I should be able to live and this isn’t living,” she said. “If I go down there and I have a cup of coffee I feel guilty because I feel like I should have bought a pound of hamburger to have something to be able to eat.”

There are projects in the works around the Wenatchee Valley that officials say will provide more options for people like Noyd.

Catholic Charities is nearing completion on a 67-unit low-income apartment complex in East Wenatchee. But the general low-income waiting list there already has 150 applicants, the organization said in November.

“We struggle with it as well, trying to find affordable housing for individuals and families,” he said. “Unfortunately, there’s still a shortfall.”

Benefit account set up for Neta Noyd; World readers step up to help

EAST WENATCHEE — Cashmere Valley Bank has set up a benefit bank account for Neta Noyd, the East Wenatchee woman on a fixed income facing a sev…