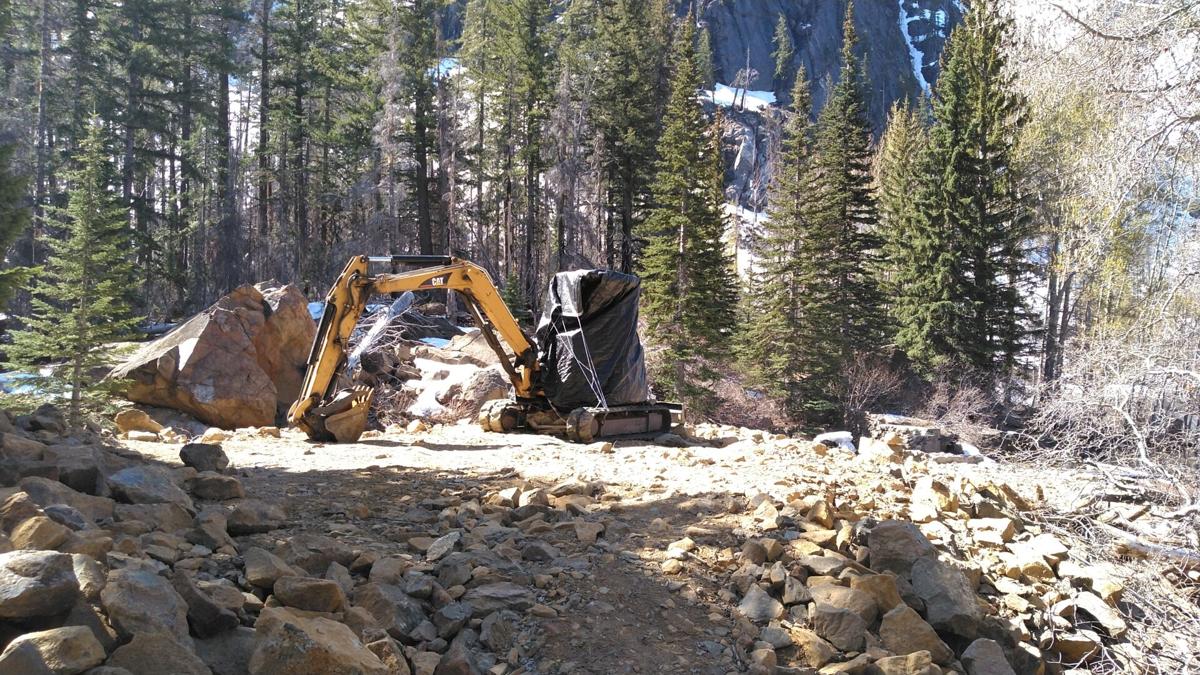 An excavator belonging to the Icicle and Peshastin Irrigation District remains on location at Eightmile Lake in the Alpine Lakes Wilderness, waiting to be put to use to repair the dam. 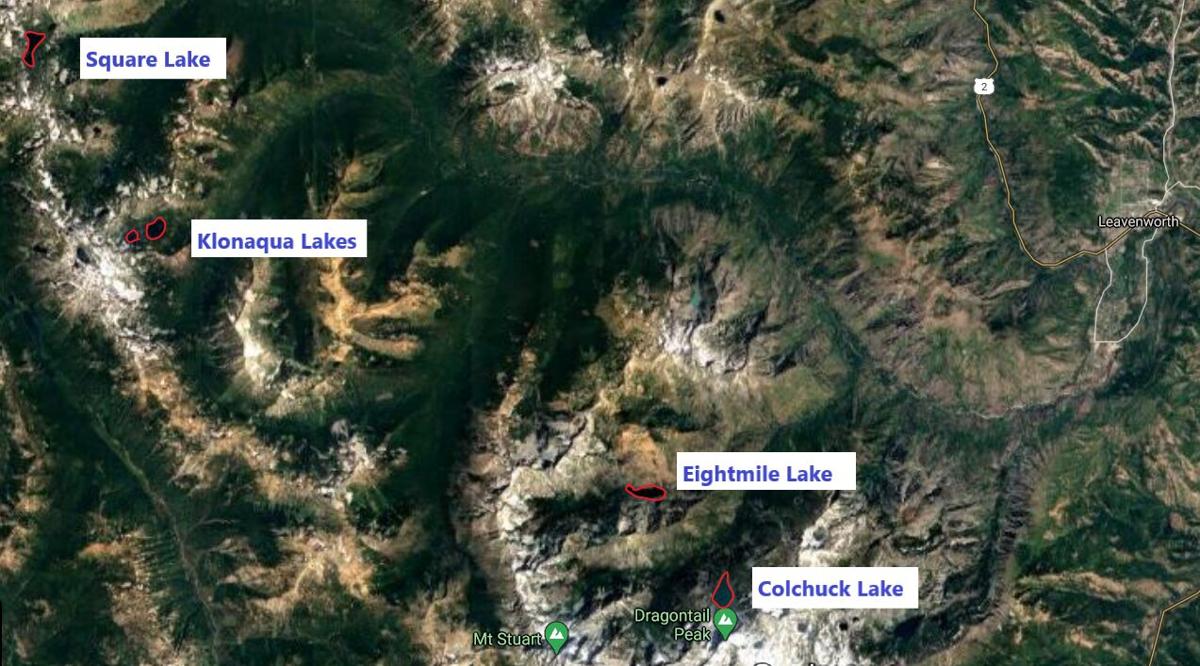 These are the four reservoirs in the Alpine Lake Wilderness that the state Dam Safety Office has been looking at for the Icicle and Peshastin Irrigation District.

An excavator belonging to the Icicle and Peshastin Irrigation District remains on location at Eightmile Lake in the Alpine Lakes Wilderness, waiting to be put to use to repair the dam.

These are the four reservoirs in the Alpine Lake Wilderness that the state Dam Safety Office has been looking at for the Icicle and Peshastin Irrigation District.

LEAVENWORTH — Three dams in the Alpine Lakes Wilderness have been listed as high hazard with as many as 177 residences potentially at risk if one of the dams failed.

The risk assessment is based on the number of people threatened if one of the dams were to break, but it does not mean that the dams are in danger of breaking, said Joe Witczak, state Dam Safety Office dam and well manager. It is a worse-case scenario assessment.

“It’s new because it’s the first time that (those dams) have been inspected,” Witczak said. “We’ve been aware of them and they’ve been listed in our database as low hazard.”

The dam office released a report Oct. 2 that upgraded the risk at Colchuck, Klonaqua and Square Lake dams owned by the Icicle and Peshastin Irrigation District.

Dam office personnel started looking into these dams after it reviewed Eightmile Lake’s dam and discovered in 2018 that it needed maintenance, he said. The wilderness area is south of Icicle Creek Road and includes The Enchantments.

While the hazard level is based on the number of people who would be at risk if the dams broke, the physical condition of the dams is also listed as poor, mostly because the dams need to be studied further. According to the report, the Lake Klonaqua dam did have some seepage along one embankment.

The dam office’s maintenance and evaluation recommendations for the irrigation district included:

As many as 177 residences would be at risk if Colchuck Lake dam did break, according to the report. Homes along Icicle Creek, the city of Leavenworth, the banks of the Wenatchee River and near Cashmere would be impacted.

For Klonaqua Lake Dam, 106 residences would be in danger and Square Lake 70 residences, according to the report.

A lot of the requests by the Dam Safety Office will be answered by efforts to automate those lakes, said Tony Jantzer, Icicle and Peshastin Irrigation District manager. The dams need to be opened manually right now and someone has to hike up to them to do so.

“(They) make it out in that report like we’re not doing anything ... but we’ve had lots of engineers up at the lakes over the last three or four years — trying to figure out what to do, what needs to be done — and that’s all part of the automation plan,” Jantzer said.

The irrigation district has been working with the Icicle Working Group for plans to open those gates remotely using a radio signal. The working group is a collection of stakeholders interested in increasing flows in Icicle Creek for fish passage and home development in the Leavenworth area.

The dam that is going to take the most work is Klonaqua Lake, Jantzer said. It has a dam made of logs that is rotting and needs to be replaced. The plan is to replace the rotting logs with baskets that consist of rocks placed in a mesh cage.

At Colchuck Lake there is a corrugated metal outlet pipe that is rusting and irrigation district personnel want to slip line it with plastic piping, he said.

These other dam repair projects shouldn’t require as much work or heavy equipment as is needed at Eightmile Lake Dam, as the other dams are mostly masonry, rock and mortar, dams, Jantzer said. But the irrigation district won’t know for sure until it completes the additional inspections.

“If they say that, you know, because it is now a high-hazard dam that is no longer satisfactory and we have to put in a big cement dam, or something in there, that could change things,” he said.

The irrigation district will likely contest the high-hazard assessments for Klonaqua and Square Lake dams, Jantzer said. The outlet pipes on those lakes were driven through solid granite and so it is unlikely a dam breach would have the same effect as it would at the dams on Colchuck or Eightmile lakes.

Also the creek coming from Square Lake meanders through wetlands and floodplains where water can dissipate.

The irrigation district has faced pushback for some of the work it is doing at Eightmile Lake Dam from environmental groups. The dam is in need of repair, but it is located in the Alpine Lakes Wilderness. Wilderness areas by federal law are not supposed to have any mechanization occur within them.

One of the points of contention is the irrigation district believes it has the right to drive equipment through the wilderness to access Eightmile Lake.

Environmental groups are also concerned that the new dam designs show an outlet pipe that would allow the dam to be drawn down further than it has in the past. Environmental advocates fear that any expansion of the existing reservoir in the wilderness area could establish a precedent for other wilderness areas and they have threatened to sue if this occurs.

The irrigation district and environmental groups may be getting close to an agreement, Jantzer said. The district submitted a proposal in October to give up its right to 500 acre feet of water out of the lake, as well as its right to drive an excavator through the wilderness.

“And then you know we would pack in on horses, or whatever, our stuff,” he said. “So we’d give up our ability to walk an excavator through the wilderness.”

The irrigation district would also have to use a helicopter to deliver material, Jantzer said. It would increase the cost to fix Eightmile Lake Dam by about $300,000.

“I’ve been a Scoutmaster for 25 years,” Jantzer said. “I’ve taken thousands of boys into the wilderness. I think it is the greatest thing that there is and I don’t like being in this position of harming the wilderness. I just find it interesting the position I’m in.”

Chelan eateries get a boost from chamber's Restaurant Rally