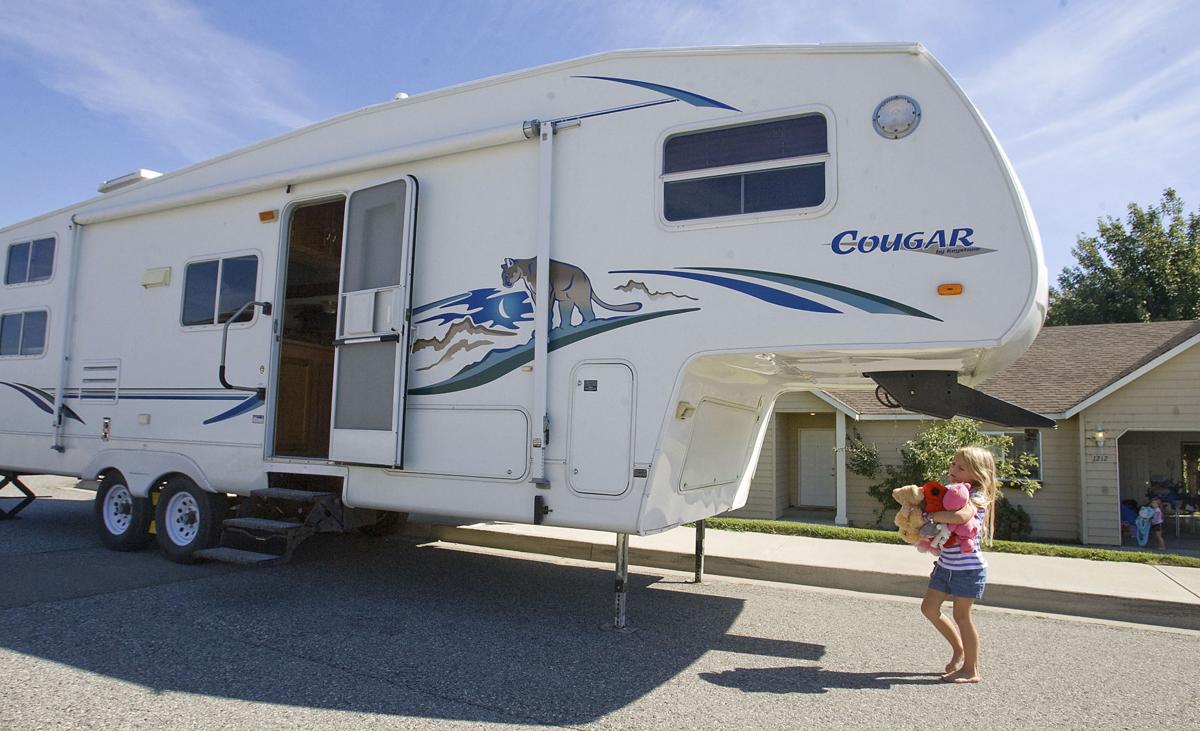 Sunny Fitzgerald, 6, takes some stuffed animals from the house to put into the trailer. 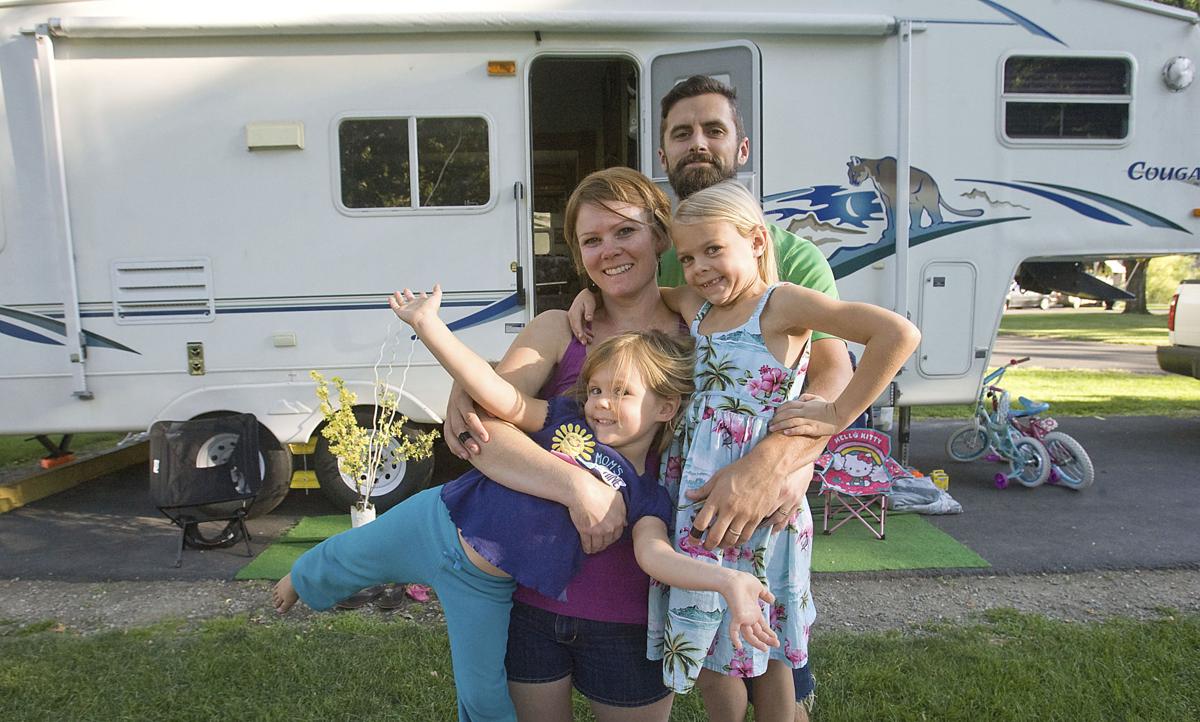 The Fitzgeralds plan to live in this 31-foot trailer for at least the next year and explore the United States. Clockwise from lower left: Coral, 4, Sarah, Brad and Sunny, 6. 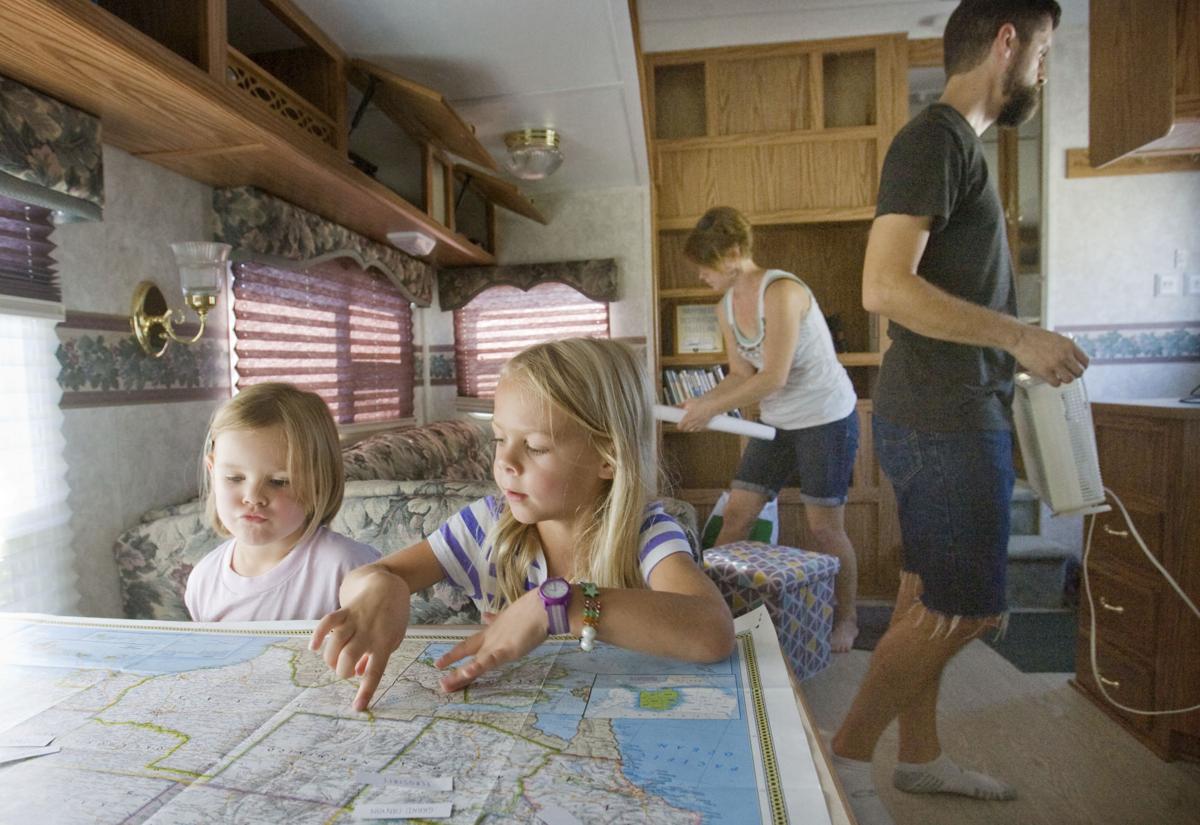 Coral, 4 and her sister Sunny, 6, look a map as their parents Sarah and Brad Fitzgerald pack up their 31-foot-long trailer that they plan to live in for at least a year as they explore the United States.

Sunny Fitzgerald, 6, takes some stuffed animals from the house to put into the trailer.

The Fitzgeralds plan to live in this 31-foot trailer for at least the next year and explore the United States. Clockwise from lower left: Coral, 4, Sarah, Brad and Sunny, 6.

Coral, 4 and her sister Sunny, 6, look a map as their parents Sarah and Brad Fitzgerald pack up their 31-foot-long trailer that they plan to live in for at least a year as they explore the United States.

MONITOR — A fifth-wheel trailer and 2008 Ford Super Duty pickup are nearly ready to roll. The inside of the trailer is packed with everything Brad and Sarah Fitzgerald and their two young daughters will need for the next year or so, maybe much longer.

The East Wenatchee family has decided not to put off to tomorrow what they can do today. Cravings for travel and adventure have been gnawing at them for years. Why wait for growing responsibilities to get in the way?

"We started talking about this before we had kids eight or nine years ago when we took a road trip to Mount Rainier. What if we could do this all the time?" said Brad, a 34-year-old self-employed graphic and web designer.

"It's been a dream for a long time," added Sarah, 33, who quit her job with the Wenatchee Parks and Recreation department. "All the reasons to stay always outweighed the possibilities. We worried we would set ourselves back. We finally decided the only reason not to do it this time was because we were scared."

The Fitzgeralds decided to take the plunge. They've handed over the keys to their East Wenatchee home to renters and moved into the 2002 31-foot Cougar trailer they bought before they even had a truck to pull it. The rig is now parked at Monitor RV Park. They left Sunday for Oregon. Crater Lake is on their list. They'll linger in the California redwoods and along the Pacific Coast before heading inland to Yosemite. Then up to Utah to see Bryce Canyon, Zion, Natural Arches national parks.

"I want to see a walrus and a polar bear," said Coral, 4. Zoos, national parks, nature areas, museums and the nation's capital are high on the list of stops on the family's counter-clockwise-around-the-U.S. travel plans. Family and friends in several states are waiting for their extended visits. The exciting part will be making new friends and seeing new places along their travels.

Where they go isn't as important as when, why and the potential for self growth, said Brad. He plans to keep his graphic arts business going online while traveling. Sarah will home school the girls.

"Personal growth is just as exciting as where we go and the places we'll see. It's an opportunity to let ourselves grow and learn new things," he said. Pulling a 281-square-foot home on wheels and maintaining a big rig will be a new experience. He's still learning how to back the trailer and get it leveled.

"I drive it forward. Sarah drives it backward," he said with a laugh.

Sarah said she's had the urge to travel since high school when her parents invited two foreign exchange students to stay with the family on their rural Arkansas turkey farm. She met Brad at Harding University near Little Rock. Brad didn't know what it was like not to travel. He grew up in a military family. His parents taught on military bases all over the world.

After marriage, they took their first trip around the country looking for a place to put their college degrees to work. Wenatchee was the smallest city Brad had applied for work as a graphic artist. The town seemed like a perfect fit.

Sarah said it's been hard to say goodbye to friends, hard to leave her job of 11 years, leave their church and find a new home for their dog.

But once they decided to give away possessions, she felt a wave of relief.

"We've always been drawn to living with minimal stuff," said Sarah. "It was hard after we had kids, but the idea of downsizing and living minimally was appealing." After selling some things, storing others, they had a farewill party. Friends were invited to the house. Everyone was asked to take something home with them. Artwork, clothing, kitchen items, furniture. Nothing was off limits.

"To see our friends walk away with some of our stuff made me feel really good," she said. "It was wonderful to see things I loved go to other uses rather than be hidden in a closet."

The couple plan to circle back to Wenatchee by next fall to check on their house, visit friends, and who knows, maybe stay awhile, or maybe keep going. Owning their house here gives them a sense of security, and income.

"We don't feel like we want to do this forever. But we're all healthy right now. We have freedom and few responsibilities," Sarah said. "We knew if we don't do this now, we would regret it."