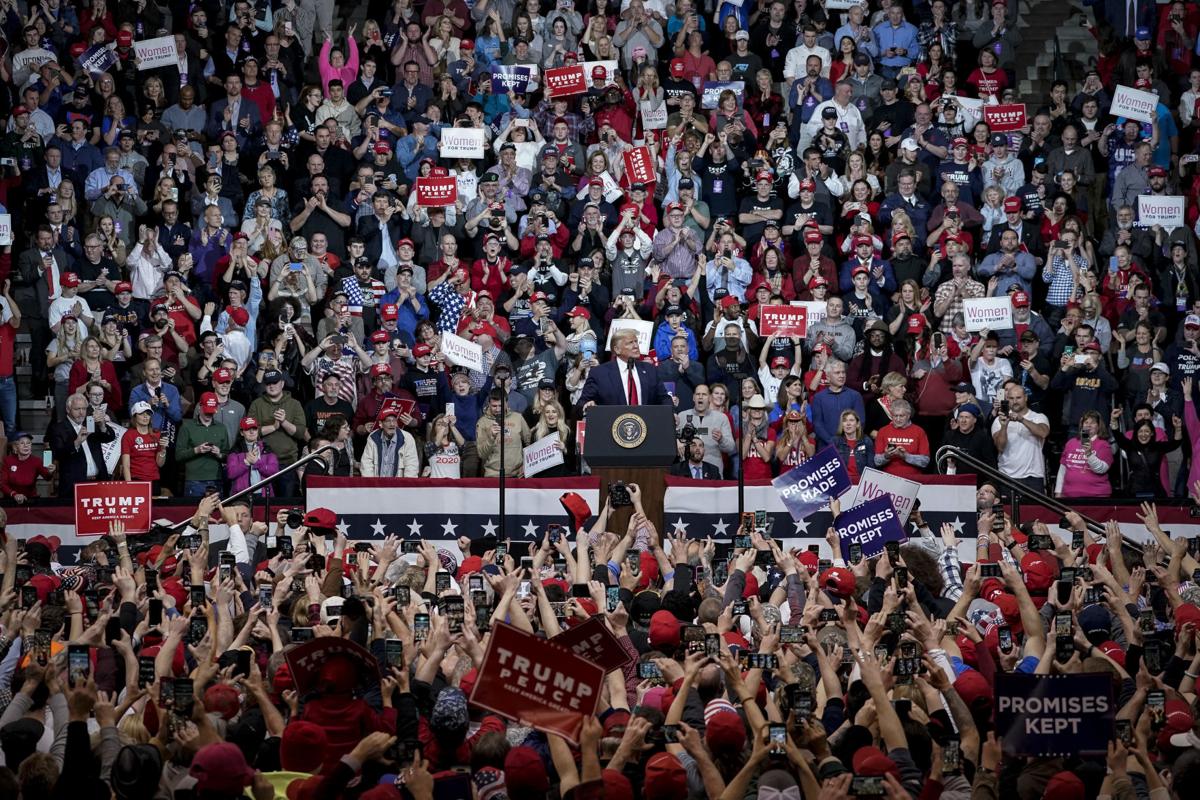 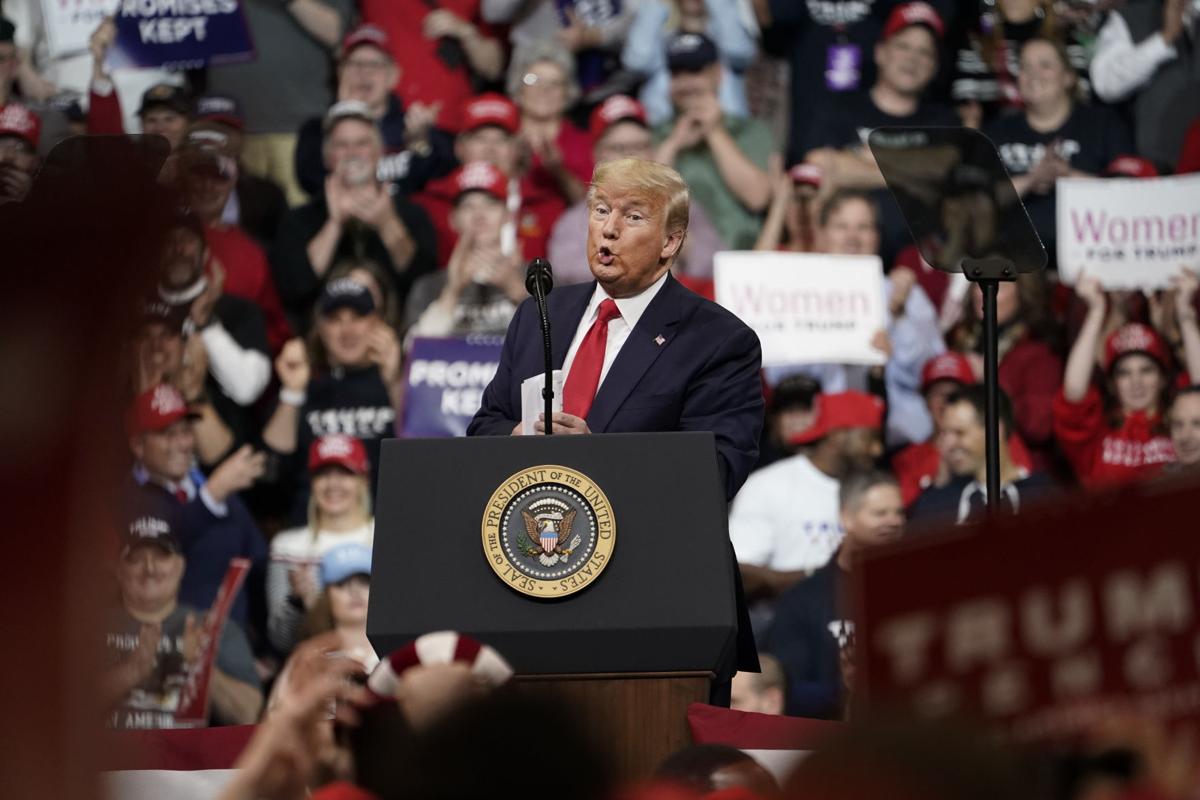 WASHINGTON, D.C. — Four years after his hostile takeover of the White House, President Donald Trump’s second campaign bears little resemblance to the first — he’s flush with cash, buoyed by an uptick in poll numbers, and brimming with confidence after surviving investigations, an impeachment and myriad controversies that have helped unite once-wary Republicans behind him.

Unlike his slapdash, anything goes 2016 campaign, Trump now can rely on a massive, professionalized apparatus that has helped raise more than $200 million, deployed eager surrogates to early primary states, and built an extensive field operation and advertising network months before Democrats are likely to choose their nominee.

He also has found new ways to break political taboos, seeking to overshadow Democratic candidates in Iowa and New Hampshire just before they held their nominating contests and playing with voters’ already frazzled nerves. At a primary-eve rally in Manchester, N.H., the president even urged supporters in the state who were registered independents, and thus able to vote in either party’s primary, to vote for the weakest Democrat.

“My only problem is I’m trying to figure who is their weakest candidate — I think they’re all weak!” he said with a broad grin.

It’s an in-your-face strategy hashed out largely by campaign manager Brad Parscale and, of course, the president, an intense manager of his own brand who is determined to remain on offense and to create the appearance of dominance and popularity that, he hopes, becomes a self-fulfilling prophecy in November.

“He will not give the Democrats a free pass any day of this campaign. They don’t get to have their day where they dominate the news,” said Matt Schlapp, a veteran GOP operative whose wife, Mercedes, works for the Trump campaign. “He’s stepping into their days and talking about why he should get four more years.”

“The more Democrats smear President Trump, the more enthusiasm we see for him and his many accomplishments,” Ronna McDaniel, chair of the Republican National Committee, said in a statement.

There is some evidence for that. A Gallup tracking poll from the last two weeks of January, during the Senate impeachment trial, showed Trump’s approval rating at 49%, its highest point ever. And the campaign raised $1 million in online donations for 10 straight days during the trial. More recent polls show the president’s approval number back in the low-to-mid 40s, where it has hovered for most of his term, although his support among Republicans is sky high.

None of that makes his reelection as inevitable as his campaign suggests. He is running well behind the top Democratic contenders, according to a Quinnipiac University poll this week that showed the president losing a hypothetical head-to-head race to Michael Bloomberg by nine points, Bernie Sanders by eight and Joe Biden by seven.

He also trailed Pete Buttigieg, Elizabeth Warren and Amy Klobuchar by at least four points, according to the survey.

Unlike any previous president, Trump formally filed his reelection campaign papers with the Federal Election Commission on the day he was inaugurated in January 2017. He has held dozens of raucous campaign rallies and coffer-filling fundraisers since then, firing up his supporters and irking his critics.

Although Trump faces no serious challengers for the Republican nomination, his campaign chartered a plane to fly 80 prominent, red-hatted aides and allies to Iowa for its first-in-the-nation caucuses on Feb. 3 and repeated the operation ahead of New Hampshire’s primary on Feb. 11.

“This is the earliest an incumbent has geared up the grassroots that I’ve ever seen,” said Schlapp, who believes the five-month impeachment process galvanized Trump supporters, many of whom are eager to channel their emotional response into action.

As other presidents have done, Trump uses Air Force One and other trappings of the Oval Office as props or perks for his campaign events.

When the president arrived in Manchester on Monday, a dozen GOP lawmakers stepped off Air Force One after the hour-long flight and closely followed him down the boarding stairs, a momentary tableau encapsulating the power relationship between the president and his party.

As Trump prepared to take the stage, his backers fanned out, basking in their supporting roles in his political road show — and the political benefits they derive back home in their deeply red districts.

House Minority Leader Kevin McCarthy, R-Calif., did an interview with a local TV crew, talking over a Guns N’ Roses track thundering through loudspeakers. Rep. Matt Gaetz, R-Fla., one of the president’s most ardent defenders on cable news, signed MAGA hats and posed for selfies before and during the speech.

And when voters went to the polls the next day, two Republican senators, Lindsey Graham of South Carolina and Rick Scott of Florida, posed for selfies at Bedford High School while Donald Trump Jr. held down the corner booth of a popular Manchester eatery.

That night, Trump celebrated his vote total, the most an incumbent has won in a New Hampshire primary. The turnout was impressive, although the state’s population has grown. In percentage terms, he trailed President Reagan’s reelection margin.

“The Democrats have been trying to create this narrative that they’ve got excitement or intensity on their side, but the real record-setting excitement and involvement is with the president,” said Tim Murtaugh, a Trump campaign spokesman.

“The Democrats are still in their messy, prolonged nomination process,” he added. “We are building our army for the general election now.”

Spending campaign cash to run up the score in a nomination race that Trump is certain to win is a luxury enabled by his overwhelming financial advantage.

The campaign and the Republican National Committee jointly raised more than $60 million in January, officials said Thursday, creating a war chest of more than $200 million in cash — more than double what President Barack Obama had at this point when he ran for reelection in 2012.

Donors for Democrats are still splintered, with five major candidates vying for cash. Sanders, who tied in Iowa and won New Hampshire, raised $25 million in January, more than any of his rivals. Bloomberg, a billionaire businessman, has spent about $200 million for his campaign, but all out of his own pocket.

The Trump campaign intends to plow its money into targeted digital messaging, television advertising and a heavy schedule of Trump rallies, which advisers believe remains their most important organizing tool.