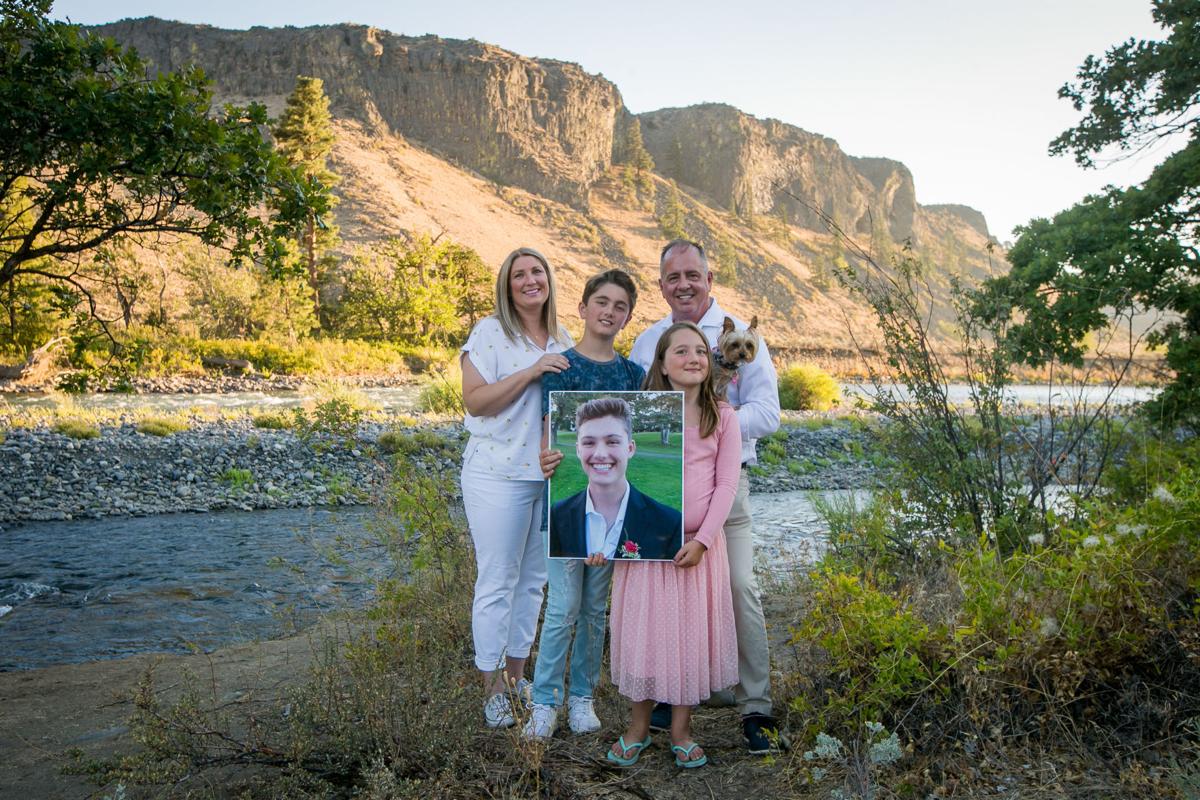 The Robbins family poses with a portrait of Christian Robbins on Aug. 14 near the Naches River. From left are Sarah Robbins, Ethan Robbins, 11, Sophia Robbins, 8, and Ted Robbins with the family's Yorkshire Terrier, Abby. 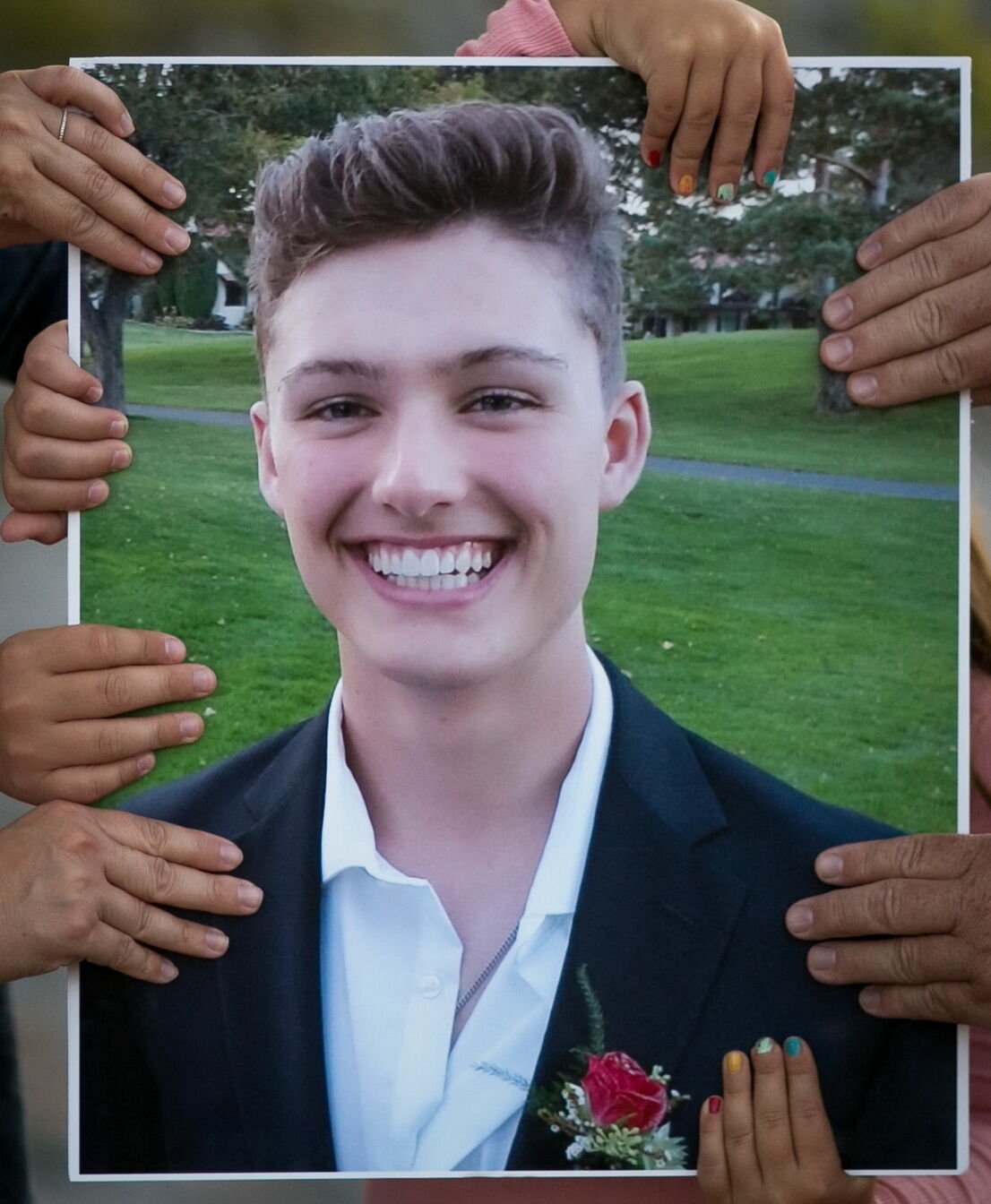 The Robbins family holds a portrait of Christian Robbins.

The Robbins family poses with a portrait of Christian Robbins on Aug. 14 near the Naches River. From left are Sarah Robbins, Ethan Robbins, 11, Sophia Robbins, 8, and Ted Robbins with the family's Yorkshire Terrier, Abby.

The Robbins family holds a portrait of Christian Robbins.

YAKIMA — Christian Robbins was an older brother, a student athlete and an A student. He was known for his infectious smile and determination. He loved taekwondo, football and weekends with close friends.

He was also passionate about mental health, having seen family members struggle with it, as well as facing his own challenges. Robbins hoped to spend his career creating support for others struggling with mental illness.

Now, his family hopes to share his legacy, bringing more openness to conversations about mental health and healing. Amid the isolation and uncertainty of the COVID-19 pandemic, they hope other young people can get the support they need to prevent more loss.

"It's so heartbreaking because the kid from the outside (had) so much going for him. To see what the pain internally (was) doing to him, it's just so intense," Ted Robbins said of his son.

Ted and Sarah Robbins moved from Naches to Richland when they found out Sarah was pregnant with Christian Robbins, their eldest of three.

By eighth grade, Robbins was 6 feet tall. By freshman year he received recognition for his talent as a defensive football player across grades and teams. From a young age, colleges were looking at the Richland student because of his athletic promise, his dad said.

With a family history of mental health challenges, Robbins also had struggles. In addition to enduring bullying at school, he was diagnosed with bipolar disorder last year at the age of 15. Around the same time, he tore his ACL, eliminating athletic prospects.

"That just really crushed Christian because he loved sports so much and he loved the athleticism from it," his dad said.

Through his own research on mental health, the student found a correlation between physical activity and mental health. He came to realize that a lot of people struggled with mental health from a young age, and aspired to help them by building a business focused on improving mental health through movement and physical health.

When his athletic pursuits came to a halt, he leaned into academics and career goals. He was admitted to Columbia Basin College as one of a handful of sophomores in high school pursuing dual credits at the college last school year. It was a double win, said his dad, because Robbins could avoid the bullies that taunted him at school and was on track to finish high school with a two-year degree.

But in October, his mental health challenges peaked. Robbins came to his dad to say that he was having suicidal thoughts and didn't expect to make it through the night. He said he needed help.

Robbins spent about a week and a half at Comprehensive Healthcare's Adolescent Inpatient Facility, also known as Two Rivers Landing, in Yakima getting treatment. After, his dad said he felt more stable. But within a few weeks, he was on the decline again and needed more help. His family arranged for him to work with doctors and psychologists, and he was trying to find medication that could help stabilize his mental health.

When COVID-19 led to stay-at-home orders in March, Robbins suddenly lost in-person connections with friends. Normally, three close friends would come over every weekend. Now, the family was buckled down at home.

His dad said they were intentional about spending quality time as a family, playing board games and having regular check-ins on mental well-being. While Robbins said he was still struggling, he seemed to be improving.

"We honestly thought he was getting better for probably March through April before he took his life on April 26," said Ted Robbins. "We saw him smiling more around the house, we saw him engaging more with this brother and sister. We thought since we had made a tweak to his medicine, that boy, we had really found that."

Robbins left in the middle of the night and was found dead by police the next day.

"It's been a hard road for us," his dad said. "At first, we were so distraught and so raw, because we couldn't believe this had happened. For Christian, it was a stacking effect. It wasn't just one factor. It was the bullying in school, the mental illness, the losing of all of his sports and tearing his ACL to finally the COVID and social isolation."

Now, his dad receives calls from friends of Robbins or other families struggling with mental health. He worries that while emphasis has been placed on the physical harm of COVID-19, not enough attention has been given to the burden on mental health caused by isolation, financial stress and uncertainty during this time. He hopes that will change.

There are resources available to youth and adults struggling with mental health. One of the current challenges is making them accessible, said Tim Shields, vice president of Comprehensive Healthcare in Yakima, where Robbins received in-patient care.

When school is in session, youth have more access to trusted adults and school resources that might lead to a referral for counseling or in-patient mental health care, said Shields. He said a lot of times, this comes out of an informal conversation with a teacher between classes or someone noticing a student looks distressed and checking in with them.

But he said while need for mental health support is currently high due to the trauma and stress caused by the pandemic, referrals — and therefore access to help — are down. This is similar to declines that happen over summer or winter break. It is especially concerning because of the current circumstances, Shields said.

"What's scary about that is that we know from the national data that the need has actually increased. So we're going in the exact opposite direction that we want to be," he said. "We have these resources that are available to teenagers, we're just not finding ways to help (them) access them."

According to a survey in late June by the Centers for Disease Control and Prevention, one in four adults between the age of 18 and 24 said because of the pandemic they had considered suicide in the last month.

In Washington, the state Department of Health has pointed to an inverse relationship between age and a frequency of depressive symptoms, meaning younger individuals have reported more challenges with depression during the COVID-19 pandemic. The state department also anticipates that the risk of suicide in the state will peak in October through December, based on known cycles of disaster response.

"We're in an unprecedented time, and I'd encourage people to take care of each other," said Shields of Comprehensive. He said the community in Central Washington has come together to sew masks or make food baskets for those in need. "I hope we can get that same beautiful response to the mental health crisis."

He encouraged both parents and teachers to be intentional about asking students questions: How are you doing? How are you feeling? Are you up in the middle of the night? Are you still connecting with friends? What brings you joy during the day?

Shields said there's almost no wrong way to ask these questions — it's just important to have the conversations.

Some things to look out for are if the individual can't think of anything that brings them joy, or if they are experiencing a lot of anger. He said unlike adults, most youth experience anger when they are depressed rather than sadness. He said while substance use shouldn't be normalized among youth, drinking or smoking marijuana is usually only a warning sign of mental health problems if the individual is indulging alone.

Individuals struggling with mental health or loved ones who are concerned should reach out for help, he said. That could mean a call to Comprehensive, a primary care doctor, a school counselor, a crisis line or 2-1-1, for example.

At Comprehensive, he said telehealth services during the pandemic make support even more accessible, since individuals can get help from home. While a virtual appointment might intimidate some, he said clients reported that it was helpful, and he encouraged those in need to give it a try. If a virtual meeting isn't what someone needs, he said, there are other options.

For young people who need intensive care, Comprehensive's Two Rivers Landing serves youth from Yakima, Ellensburg and the Tri-Cities primarily. Eight beds are for short-term admissions usually lasting 10-14 days, which usually supports 200-250 individuals a year. There are also longer-term beds, which are in high demand statewide.

"Reach out to anyone," said Shields. "We're all connected. We'll get you help."

Mental health resources within the school setting are improving locally — and many are becoming available remotely, according to Emily Nelson, the student support program manager at Educational Service District 105, an agency that supports local school districts.

Local districts are forming partnerships with Comprehensive Healthcare that would allow licensed professionals to provide integrated services, rather than students or families being referred to the Yakima office, for example. Granger, Sunnyside, Ellensburg and Prosser school districts were already among districts collaborating with the organization ahead of the pandemic to provide student services, said Shields. Going into the fall, new partnerships include Selah, Wapato and Mt. Adams school districts, as well as a dual-building agreement with Union Gap School and Martin Luther King Jr. Elementary.

Shields said schools seem to be focused on providing a holistic learning opportunity for students that includes their mental well-being, compared to the spring when schools were scrambling to respond to the unexpected.

State guidelines for school reopening include a universal screening of students to assess their mental health. Nelson said ESD 105 employees are prepared to support school counselors and staff in the coming weeks in anticipation of this effort and the potential needs identified in it.

A new resource system hosted at the ESD office, NowPow, will also ensure that students are confirmed to have an appointment with a behavioral health professional after a referral. Separately, a peer-to-peer training in identifying and responding to signs of suicide will soon be available to local districts, and another training for parents and staff on how to respond to a mental health crisis will be available virtually this fall through the ESD.

ESD 105 is working on becoming a licensed mental health and substance use facility in the next year or so, which would allow it to hire licensed behavioral health staff to send out to schools to work with students, similarly to Comprehensive's agreements. It also has a staff member tasked with creating systems to address behavioral health within regional schools.

In the immediate future, Nelson said it's important that community members all along the age spectrum know that help is available.

"We need to as a society be able to talk about this more," she said of mental health, emphasizing that most people are experiencing some mental health strain — like anxiety or depression — due to the isolation, stress or uncertainty caused by the pandemic alone. "There is hope and there is help available."

Here are some local options for mental health help for all ages:

Capital gains tax: A look at how Washington got here and what's still to come