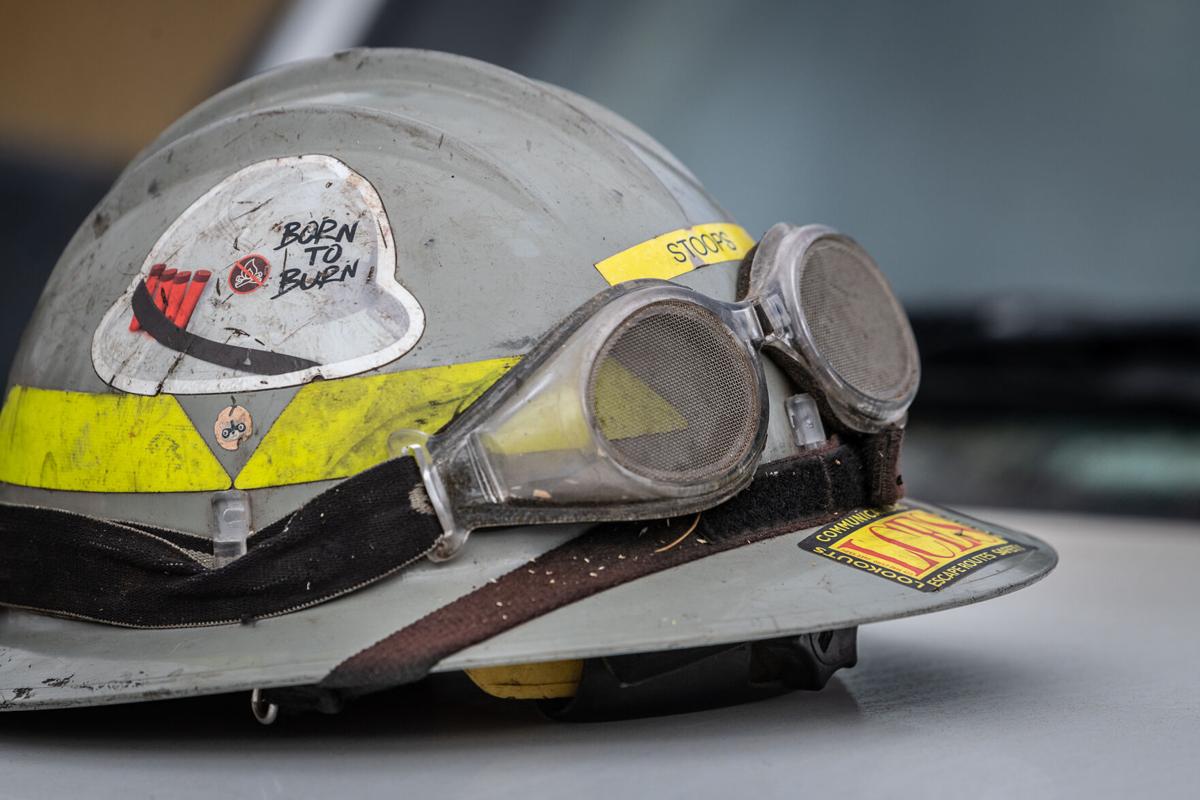 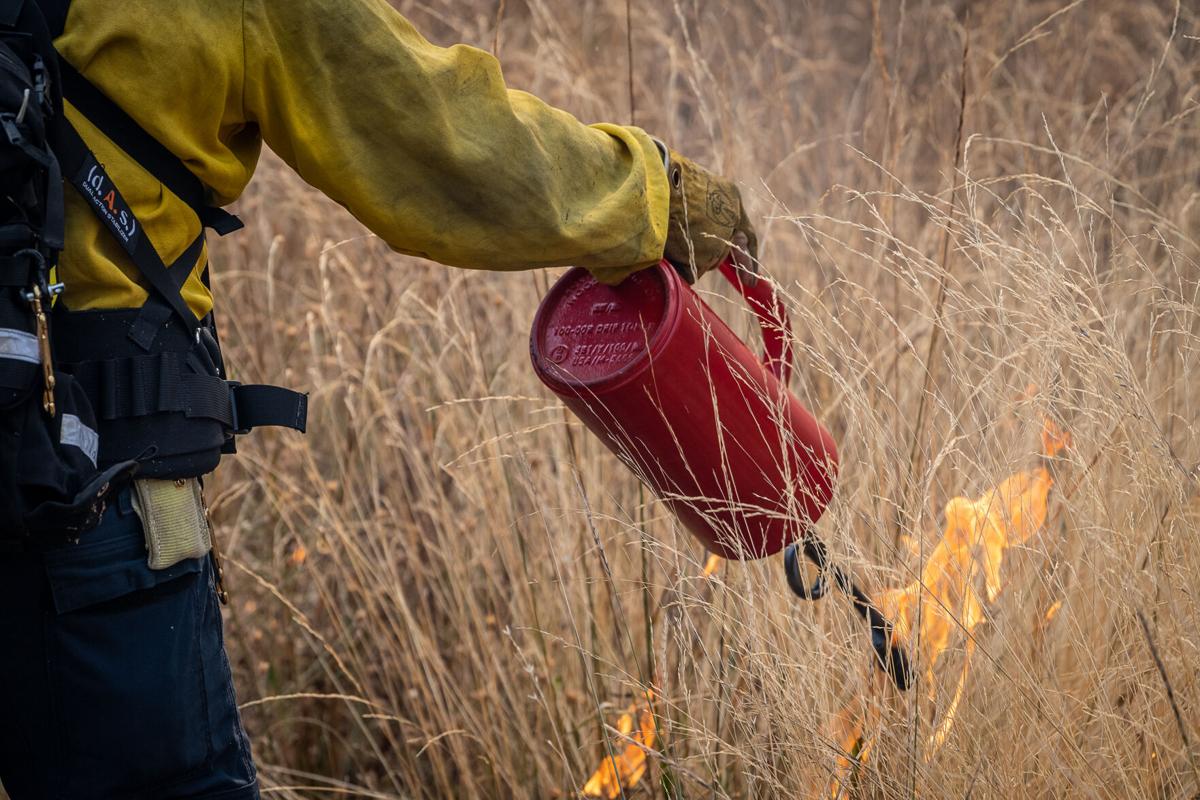 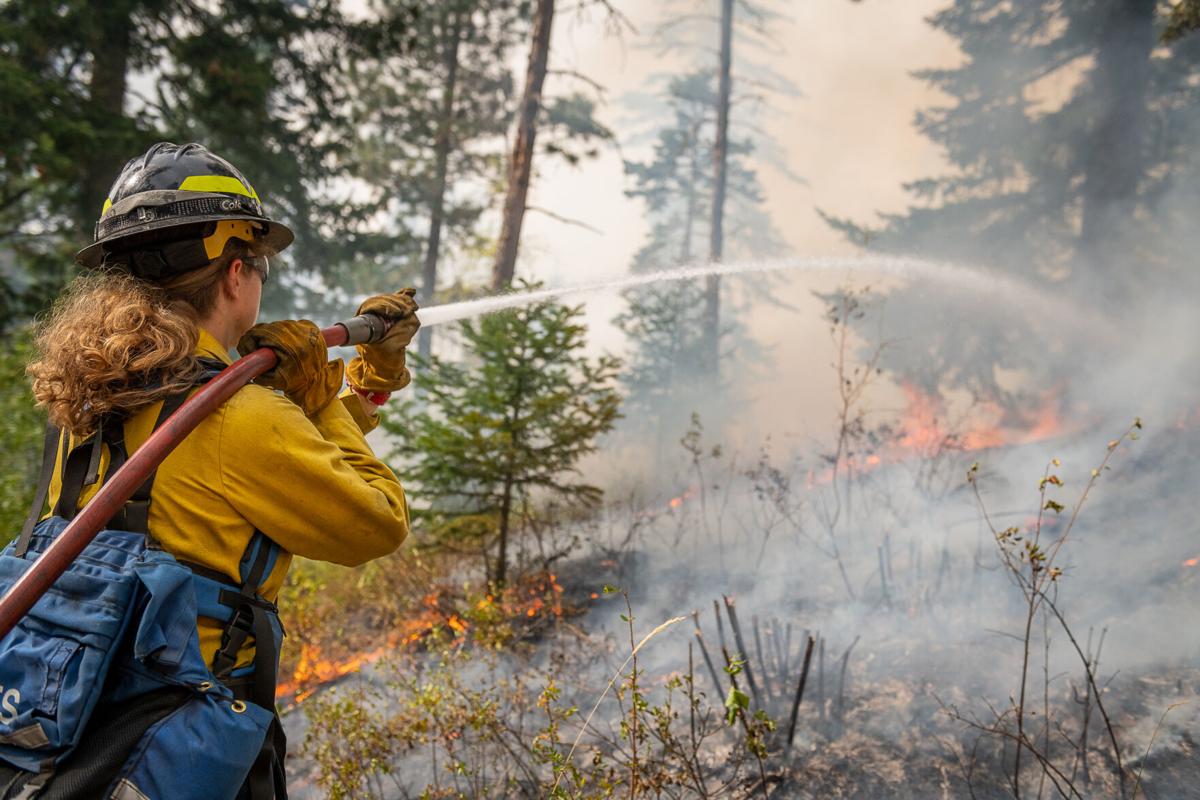 A firefighter puts out the flames at the prescribed fire training. 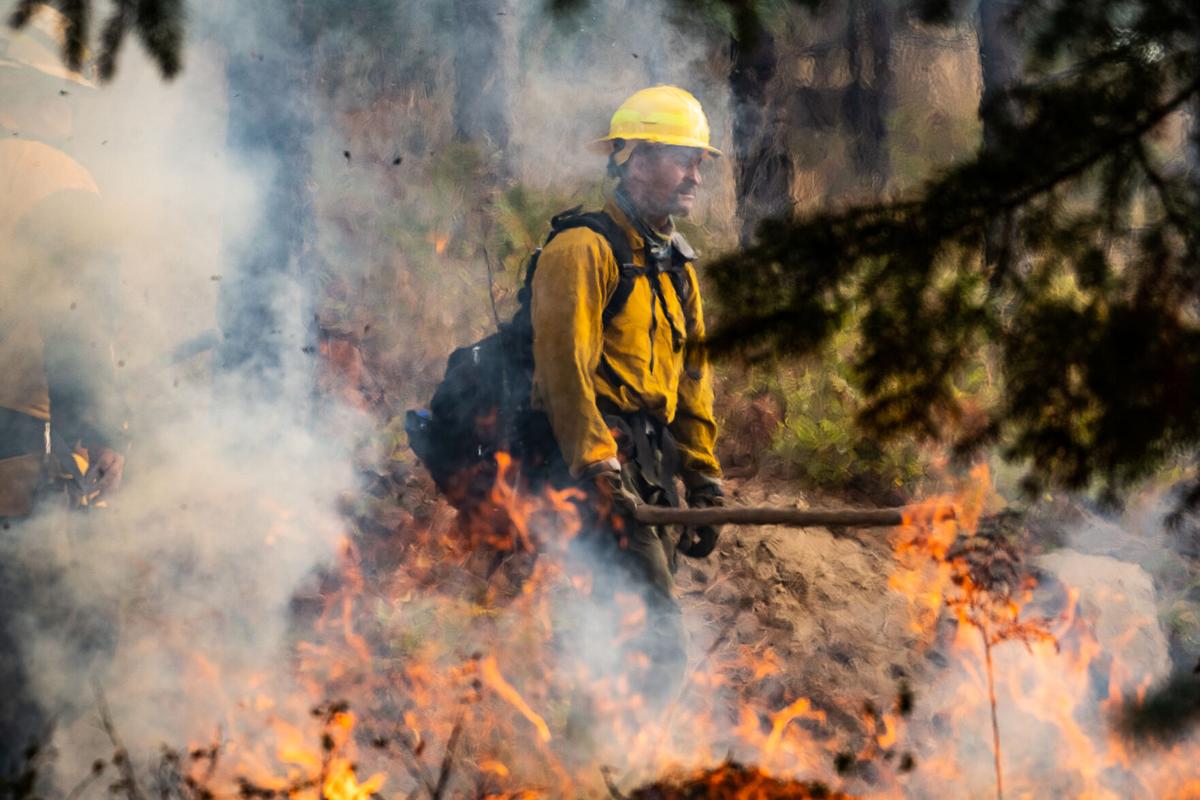 A firefighter uses a drip torch to light brush during the Cascadia Prescribed Fire Training Exchange near Roslyn earlier this month. 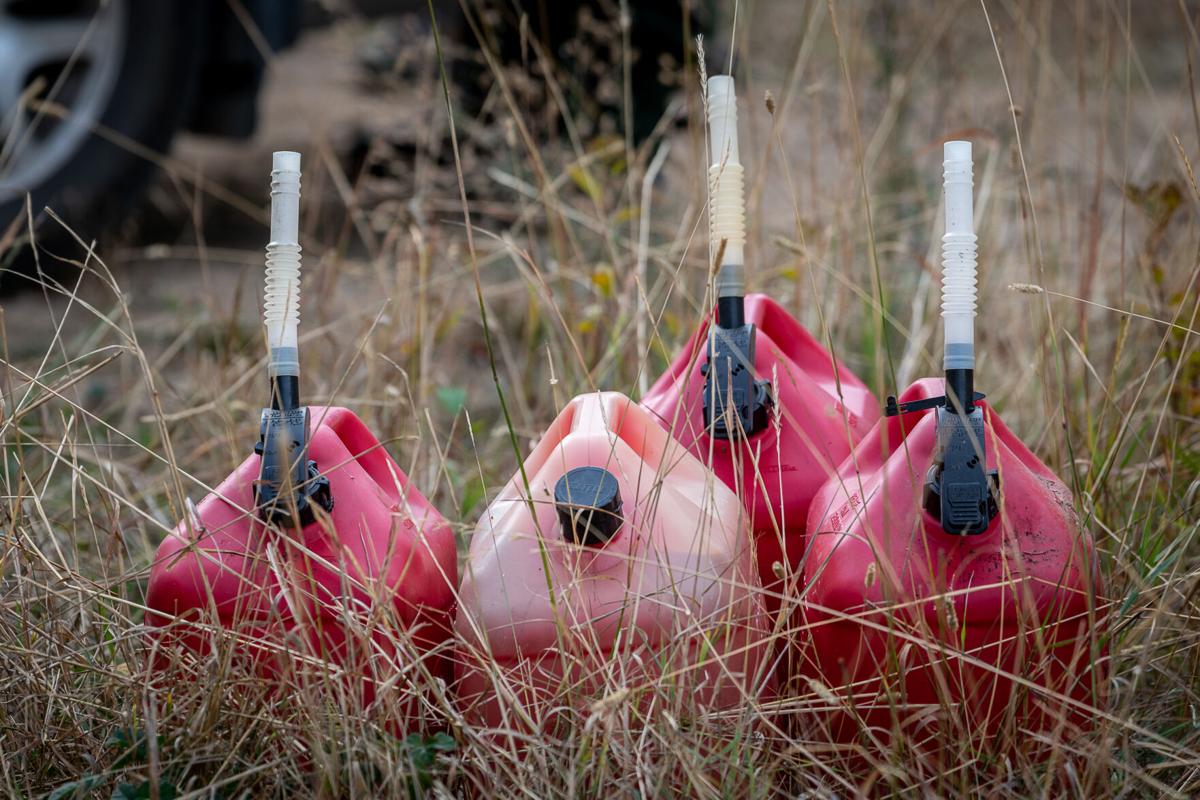 A firefighter puts out the flames at the prescribed fire training.

A firefighter uses a drip torch to light brush during the Cascadia Prescribed Fire Training Exchange near Roslyn earlier this month.

The plume of smoke rising up and blowing east away from Roslyn sent a clear message to members of a historic community surrounded by forest. Local and state officials understand the seriousness of the wildfire risk and put a priority on prescribed fire as a vital measure.

"Especially with what's been going on the last couple years, we've got to do something. And the state can't be responsible for all of it because it's a ton of area that needs to be protected," Kittitas District 1 Fire Chief Brandon Schmidt said. "As much as we can (we need to) reduce the fuel loading, especially around towns like Roslyn that are really high on the threat level, and that takes the entire county."

He served as the holding boss trainee in charge of ensuring the fire stayed within the pre-approved boundaries at Thursday's Cascadia Prescribed Fire Training Exchange. This year's annual event burned 20 acres of private and public lands and involved firefighters from six different Kittitas County fire departments to emphasize the importance of increasing local capabilities.

Chris Martin, the Roslyn Fire Department's emergency services coordinator, said local groups are better positioned to work across ownership boundaries on forest lands surrounding small towns. Despite significant reform from the state's Department of Natural Resources under Public Lands Commissioner Hilary Franz, she acknowledges it's still much faster and more efficient for Kittitas County and others to take the lead.

"We've got a ways to go," Franz said. "It's one of my top priorities to make sure we're implementing the forest health plan to untangle the bureaucratic policy and statutory knots."

The Jolly Mountain Fire in 2017 brought the threat of wildfire home for many around Roslyn, including Kittitas County Commissioner Laura Osiadacz.

She's served as a Roslyn Fire Department volunteer for 12 years, responding to structure fires and other emergencies in the city. When fire engulfing the town became an all-too-real possibility, Osiadacz saw the need to push for more fire-resistant communities and tools such as prescribed fire.

"I've been working to advocate for additional funds going into the prevention of fires, such as the work we're doing here today," Osiadacz said while volunteers waited to be briefed before Thursday's controlled burn. "How we are working with wildfires nationally is not as proactive of an approach as I think we should be using."

Kittitas County often leads the way in Washington when it comes to wildfire prevention. It was the first county to adopt a wildland urban interface code for anyone who wants to build. The Roslyn Ridge has hosted training exchanges over the last four years, bringing in firefighters from around the state.

Roslyn hired a five-person fuels management group that spent this summer working to reduce fuels and preparing areas for burns, including the one completed Thursday. Martin, who serves as the chair of Washington's Prescribed Fire Council, said $65,000 from the DNR, the Forest Service, the city of Roslyn, the Roslyn Downtown Association and Suncadia funded the group, and the city applied for a $200,000 grant to fund it for the next three years.

Schmidt and his District 1 captain, Eric Kiehn, have several years of prescribed fire experience. Kiehn works as a task force leader at many of the state's biggest wildfires and said he's learned a lot about wildfire behavior from his experience with controlled burns.

"It's something that needs to happen more frequently to create these fire breaks," Kiehn said. "It makes the community safer."

Establishing effective local efforts will require significant shifts in funding for fire departments generally geared toward stopping structure fires rather than wildfires outside the city limits. The Nature Conservancy's Reese Lolley, the Prescribed Fire Council's treasurer and former chair, said the West appears to be slowly transitioning to a model that allows private owners and cities to implement prescribed burns.

Thursday's burn marks a minimal step toward at least 6,000 acres of burning planned on the Roslyn Ridge. The state's 20-year forest management plan designates 80,000 acres of the Cle Elum watershed for forest health treatments. The more important aspect could be the training, which Lolley and others hope will speed up the process, eventually allowing the area to reach a point where the land only requires maintenance burns every 10-15 years.

It's easy to see the benefits from looking at Thursday's burn site and an adjacent area burned during the training exchange two years ago. Along with some charred trees, the burned area includes more native grasses and far fewer heavy limbs scattered across the forest floor.

It's no secret plenty of obstacles must still be cleared before Washington and its most at-risk communities can put prescribed fire on the ground at the pace needed to restore the health of Washington's forests after decades of fire suppression and mismanagement.

"Where we're trying to protect a town from wildfire, it's just awesome to see DNR turning the corner and then all these municipal fire departments, or fire districts out here, recognizing this and essentially building a whole crew," said Guse, the burn boss for Thursday's fire. "It's the kind of thing that needs to happen around the whole country."

Kiehn said this weekend's storms likely made Thursday the last chance to burn in the central Cascades this year, illustrating the difficulty of finding an adequate time during the short window between fire season and colder weather. Topography also contributes to challenges.

Franz knows the DNR will have to fight to convince the Legislature its prescribed burn program needs adequate funding amidst all of the state's other priorities.

She's pushing the state's Department of Ecology and the federal Environmental Protection Agency to approve a new smoke management plan that would roll back some of the strict clean air requirements for controlled burns. Lolley said those new regulations could make a difference in putting more good fire on the landscape, noting the vast majority of harmful emissions come from wildfires.

"We have concerns that even the existing framework that's being put forward might not be good enough," Lolley said. "The context has changed so much in the sense of culturally where we were 20 years ago and now."

Martin suggested the state could offer more funding for communities and put more responsibility in the hands of local leaders. That would enable local experts such as Kiehn and Schmidt to put fire on the ground without needing to worry about all the "red tape" Martin sees from state and federal agencies.

"There's a perception that this is really hard and dangerous. The fact is that all the prescriptions and weather parameters make it so," Martin said. "It's really a pretty safe endeavor with low-intensity fire like used to be on the landscape."