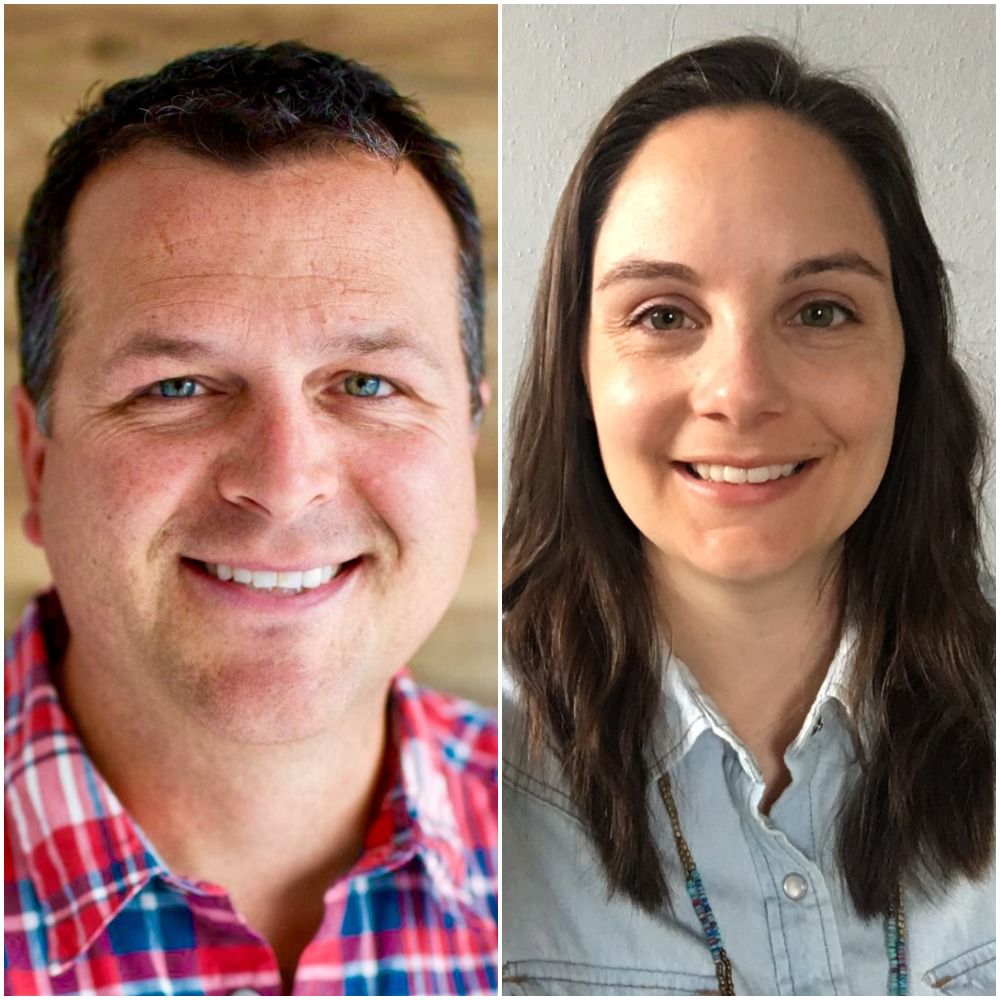 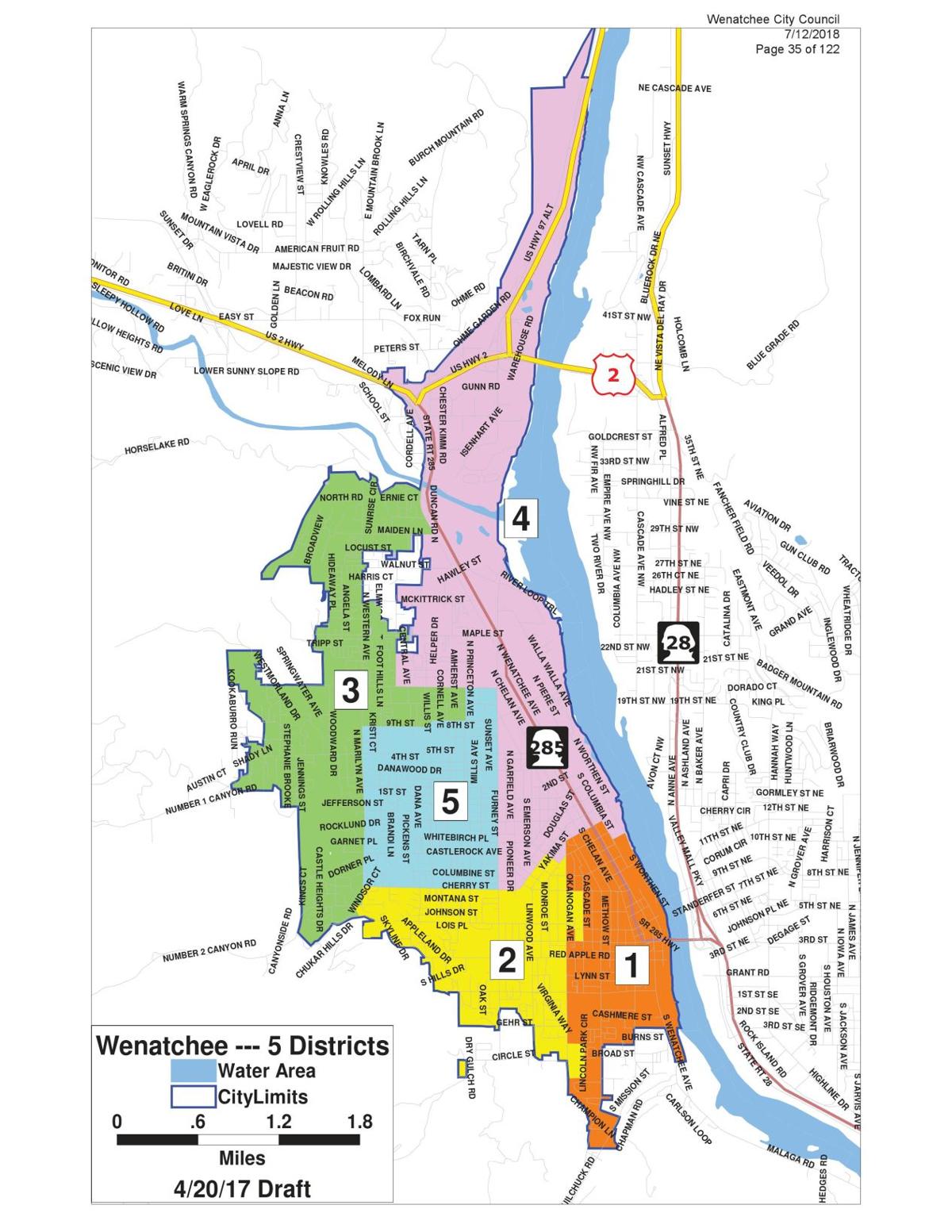 Demographer Bill Cooper divided Wenatchee into districts. This map is based on a system comprised of five districts with two at-large seats.

Demographer Bill Cooper divided Wenatchee into districts. This map is based on a system comprised of five districts with two at-large seats.

Among them will be either Travis Hornby or Melanie Wachholder, who are both looking to fill the District 4 seat.

Councilman Mike Poirier currently represents District 4, but he lives in District 2, which is not up for election until 2021. He chose not to run at-large this year.

The Wenatchee World asked both District 4 candidates to submit written answers to the following questions, using up to 200 words. They were not allowed to see each other's answers.

Here were their responses.

WW: What's your top priority for the city, and how would you advocate for it?

Hornby: There are many pressing issues for our growing city. I am focusing on business development and creating a friendly business environment. If more businesses open and others expand, it will have a multiplying effect. Business development will lead to more and better-paying jobs and more money flowing in the local economy, which in turn will benefit the city and our schools. We cannot thrive as a community if we do not have thriving schools.

Wachholder: The issue of homelessness in our city needs to be faced with compassion, but we also need to be reasonable. We need to come to terms with the fact that many of the people we see living out in the parks and on the streets are dealing with issues such as drug abuse and mental illness. This is not just the result of a housing crisis. I would like to help develop a plan to address the various issues that are causing these people to be homeless and get them the help they need.

WW: Do you support the proposed Confluence Parkway? How else might the city help relieve traffic problems?

Hornby: The Confluence Parkway is one project — and a rather large one at that — in the overall Apple Capital Loop Byway Project, which includes transportation improvements in East Wenatchee and South Wenatchee. Confluence Parkway will provide another way into the city of Wenatchee from the north and will alleviate the huge bottleneck that is now North Wenatchee Avenue. It also will open up land for redevelopment in the North Miller and Hawley Street area. At the same time, it is important to accommodate alternative forms of transportation, like buses and bikes, for our residents. Adding more bike lanes and changing traffic patterns to meet the needs of this growing mode of commuting can help decrease congestion.

Wachholder: I am in favor of finding a solution to the traffic at the north end of town. I am glad that the proposed parkway is taking into account how traffic revisions can affect businesses. I also support building another bridge. An additional exit point is important in the event of an emergency evacuation of the city. I am concerned that the plan to only add one lane in each direction with no possibility for future expansion does not account for the growth we hope to see in that area. I am also concerned about the effects this new road will have on the Horan Natural Area, and I hope that some funding for this project will go toward mitigating those disturbances and improving the natural area.

Hornby: I view this as an opportunity to plan for our community. What we don't want is reactive overdevelopment, but rather a steady approach to the long-term housing needs of our community. For that reason, I like many aspects of Our Valley Our Future's Regional Housing Plan because it covers both counties, was developed collaboratively by those inside and outside the housing industry, and is meant overall to add more middle-market housing, which is a huge need here. Our government's job is to create an environment that allows the private sector to fill the gaps in our housing market. This will create multiple opportunities for all levels of housing needs.

Wachholder: Plan for proper infrastructure in the newly developed areas and update and maintain existing infrastructure within the city. New developments affect existing areas of housing and business. We need to take into account how things like traffic will change as we expand and develop.

Personal: His wife is a pediatrician at Columbia Valley Community Health. His hobbies involve outdoor recreation. They take full advantage of this amazing place they live in by fishing, boating, water skiing, rafting, hiking, mountain biking, backcountry skiing and snowshoeing.

Personal: Has been married to her husband, Tom, since 2016. They have one son, Tommy, who is now 15 months old. Aside from running around with her toddler, she enjoys sewing (mainly quilts) and writing. She also loves to walk around town and look at the old buildings. She's been a member of St. Paul's Lutheran Church since 2018.

WENATCHEE — Giving Latinos a better chance of election to the City Council was the intent of a recent switch to voting districts, but the deci…

Quincy man wanted after body found in his room

Growing plants from starts can be 'easy-peasy'

Quincy man wanted after body found in his room