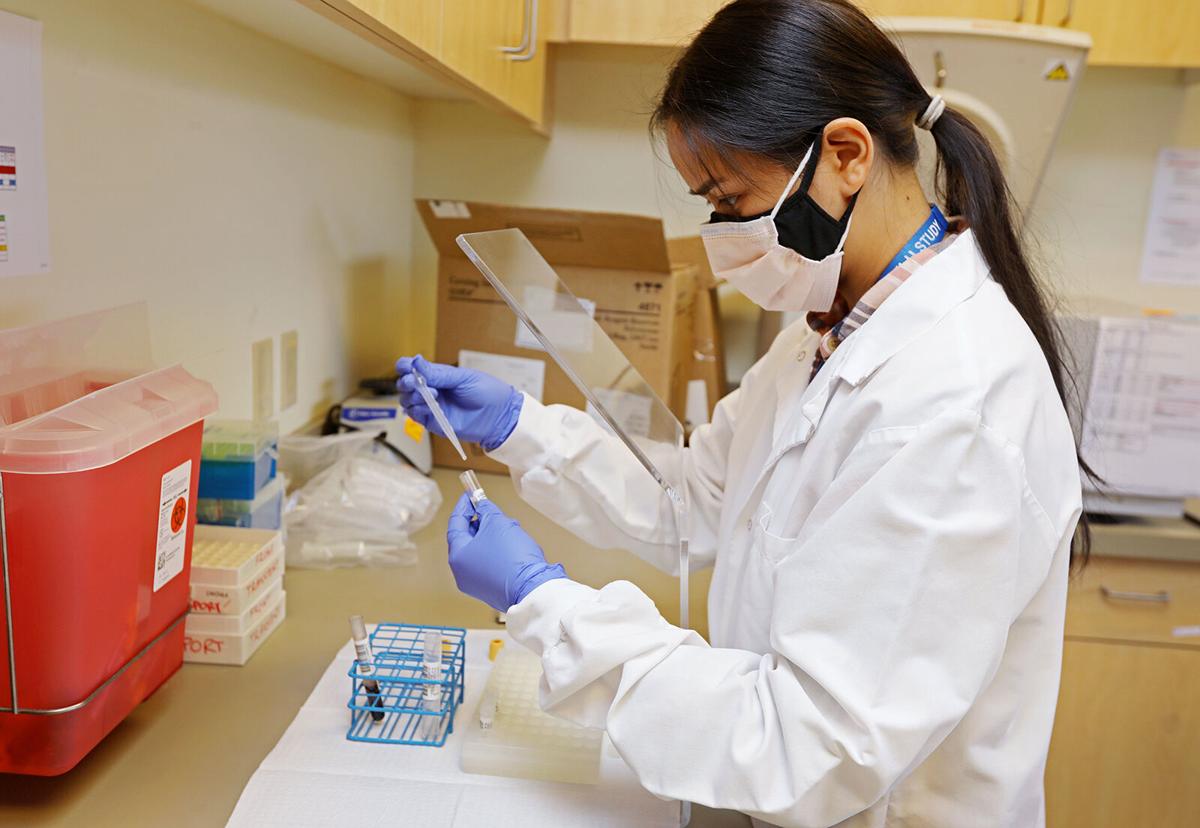 Research specialist Roxanne Erolin prepares a blood sample that is part of a random clinical trial, at Kaiser Permanente Washington Health Research Institute in Seattle last week. It is the only site in the state that is part of clinical trials on the Johnson & Johnson vaccine, which received FDA approval on Saturday for emergency use. 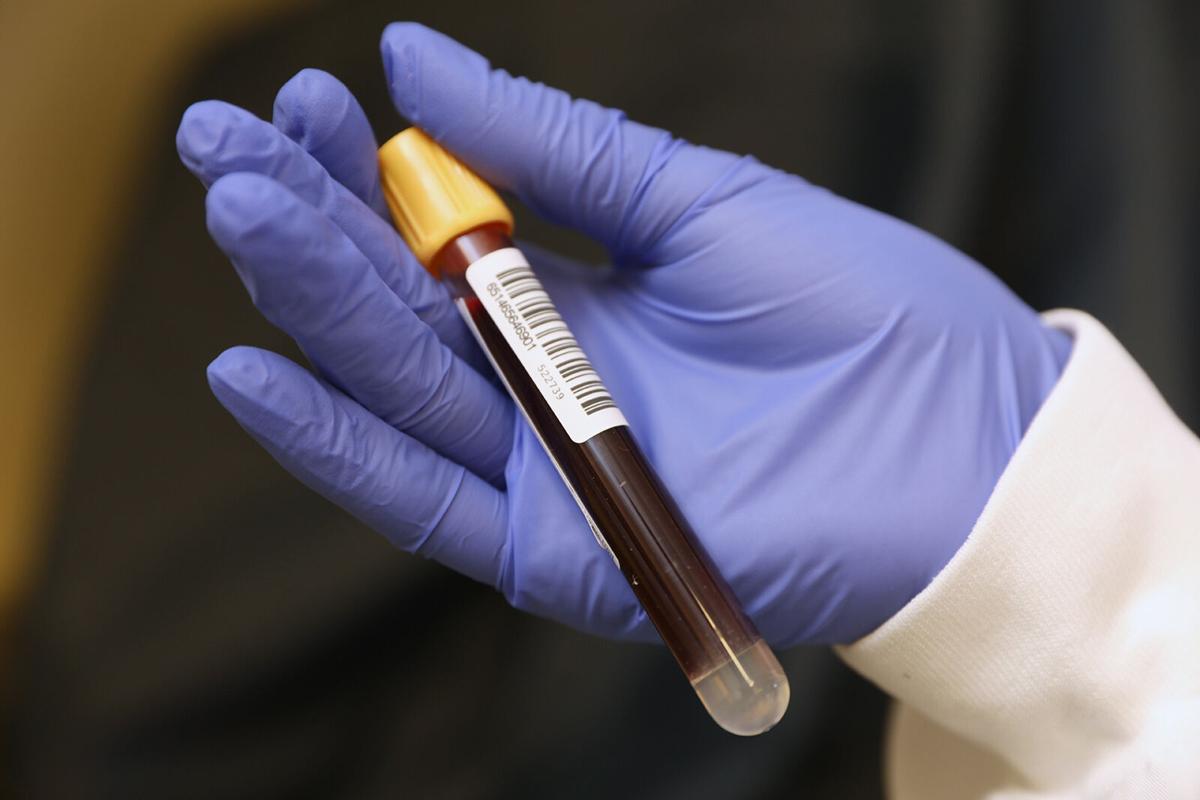 This blood sample is part of the clinical trial measuring the effectiveness of the single-dose Johnson & Johnson coronavirus vaccine.

Research specialist Roxanne Erolin prepares a blood sample that is part of a random clinical trial, at Kaiser Permanente Washington Health Research Institute in Seattle last week. It is the only site in the state that is part of clinical trials on the Johnson & Johnson vaccine, which received FDA approval on Saturday for emergency use.

This blood sample is part of the clinical trial measuring the effectiveness of the single-dose Johnson & Johnson coronavirus vaccine.

SEATTLE — A year after doctors identified an outbreak of coronavirus in the Seattle area, a third vaccine is expected to arrive soon to bolster the arsenal against the virus, now responsible for more than 500,000 deaths in the United States.

The new vaccine, which was developed by Johnson & Johnson, was authorized for emergency use on Saturday and is expected to ship nationwide this week. The vaccine could hasten a rollout that has lagged public expectations and has been hampered by supply and distribution problems.

And the Johnson & Johnson vaccine’s key characteristics — that it requires only one dose and remains stable in a refrigerator for long periods of time — could help health officials get it to hard-to-reach groups, such as those experiencing homelessness or maritime workers heading out to sea.

The two vaccines that have received emergency approval in the United States — from Pfizer and Moderna — require two doses.

Overall, the vaccine had a 72% efficacy rate during its clinical trial in the United States and evidence suggests the vaccine is safe and causes only mild side effects.

In South Africa, where a highly contagious coronavirus variant is driving cases, the efficacy was 64%. Health officials earlier this week announced that the same concerning variant had been discovered in Washington state.

While the Johnson & Johnson vaccine’s overall efficacy is lower than the Moderna and Pfizer mRNA vaccines, which both tout efficacy figures near 95%, the most important metric is how well it prevents severe disease and death, said Lisa Jackson, of Kaiser Permanente Washington Health Research Institute.

On that score, the Johnson & Johnson vaccine’s performance was an impressive 85% and there were no deaths among trial participants who got the shot.

“You want to prevent people winding up in the hospital,” Jackson said. “You might have more mild cases, but that is less consequential for the individual and for society.”

With new variants spreading at an unknown rate in the U.S., the pandemic is at a critical and uncertain point, said Janet Baseman, a professor in the department of epidemiology at the University of Washington.

The best way to bring it under control is to vaccinate as many people as quickly as possible.

“The more coverage we have and the less spread we have, it minimizes the impact of the variants,” Baseman said. Making it harder for the virus to spread and infect new people will also make it harder for new variants to develop, she added.

“We need multiple vaccines in our tool kit because of these variants,” she said. So far, the Johnson & Johnson vaccine is the only one shown to also be highly effective against the variant dominant in South Africa, Baseman pointed out.

For vaccine providers, the Johnson & Johnson vaccine is attractive because it’s a one-shot regimen and its vials, which store five doses, can be stored easily in the refrigerator for several months, if necessary.

Perhaps most important, for health organizations that have seen orders denied for lack of supply, it will boost the number of doses available.

Nationwide, the federal government expects to ship more than 2 million doses this week, and capacity should open up later this spring. Johnson & Johnson is slated to deliver 100 million doses by the end of June.

And as restrictions ease, Kreidler-Moss sees opportunity for vaccine providers trying to reach people who won’t go out of their way for a shot.

“Being able to go out and go to a soccer tournament and put out a sandwich board that says: ‘Free shot J&J,’ — that would be a good way to reach a population,” Kreidler-Moss said.

State officials have had preliminary discussions about groups that could benefit from the Johnson & Johnson vaccine.

State epidemiologist Dr. Scott Lindquist said seasonal farmworkers could benefit from the one-shot regimen. These workers often live in group housing near the farms where they work. Many of these workers will arrive this spring.

Nationwide, communities of color have been disproportionately impacted by the coronavirus. Washington officials, since they began planning for vaccination, have wanted equity to be at the center of the state’s rollout.

The first stages of the vaccine rollout prioritized health workers and Washington residents over 65, who are predominantly white.

The disparities are less stark when accounting for age, but gaps have opened, showing that vaccination lags in Black and Hispanic communities. At times, getting vaccinated has come down to who has access to transportation, technology and language to navigate a confusing system.

Now, a new vaccine with different characteristics, and public perception, adds an additional layer of complexity for state officials to consider.