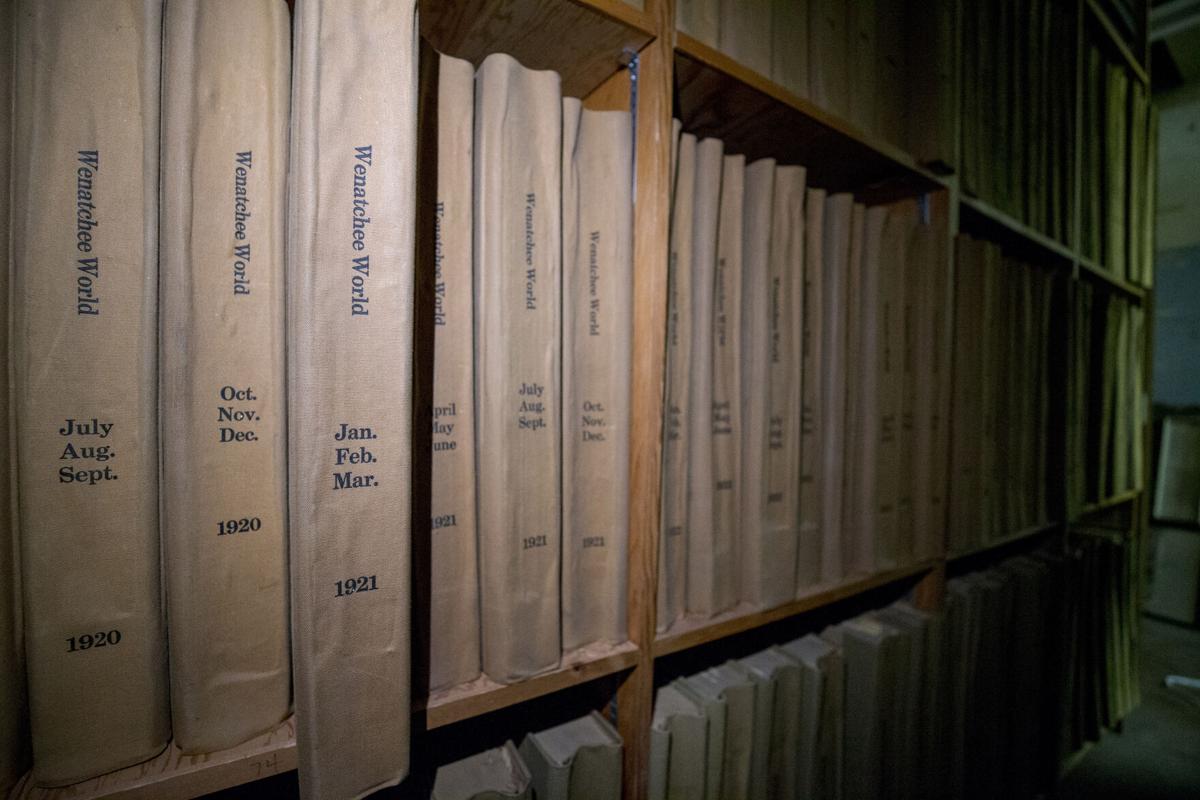 All of the Wenatchee Daily World and Wenatchee World newspapers are contained in bound volumes and stored in a cool, remote, and very dark storage area in the main office. 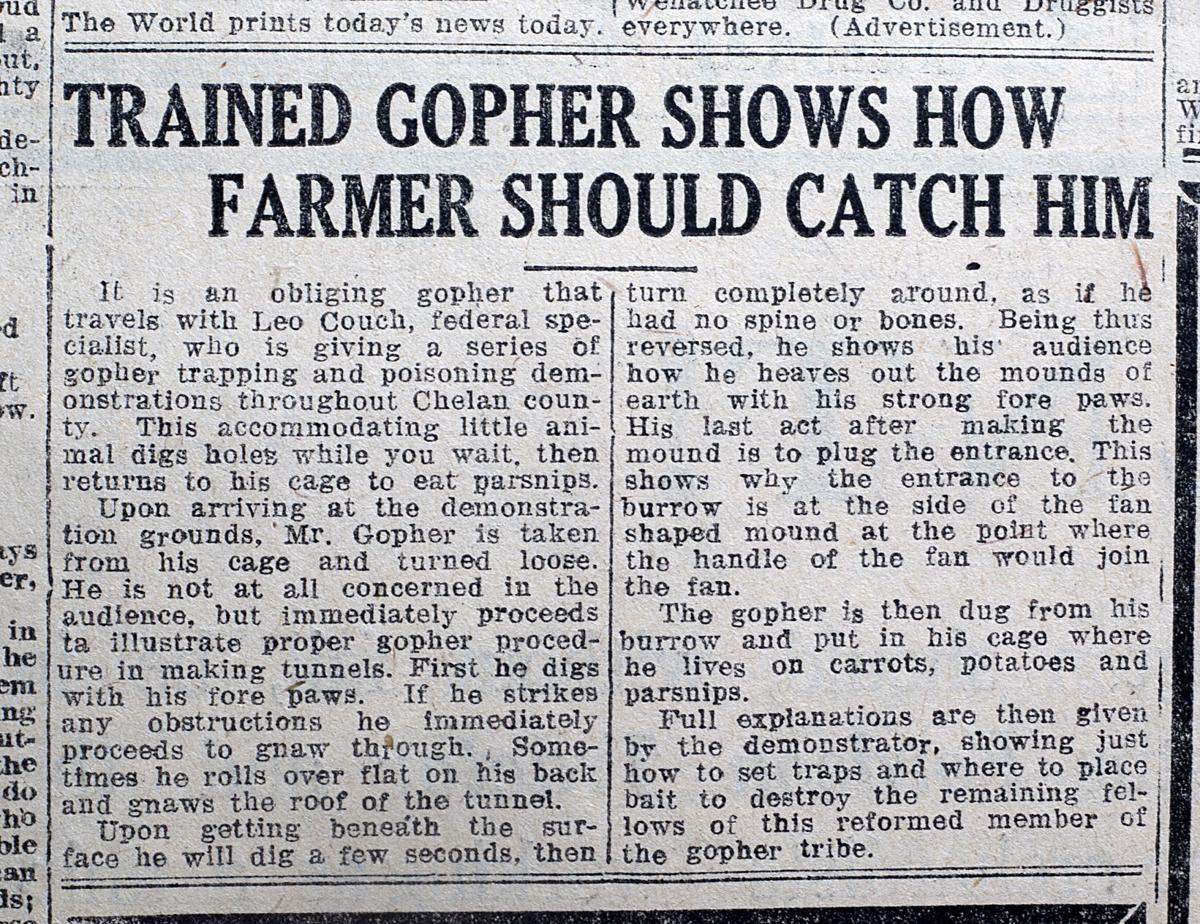 An article about Leo Couch and his trained gopher was published on April 15, 1921, in The Wenatchee Daily World. 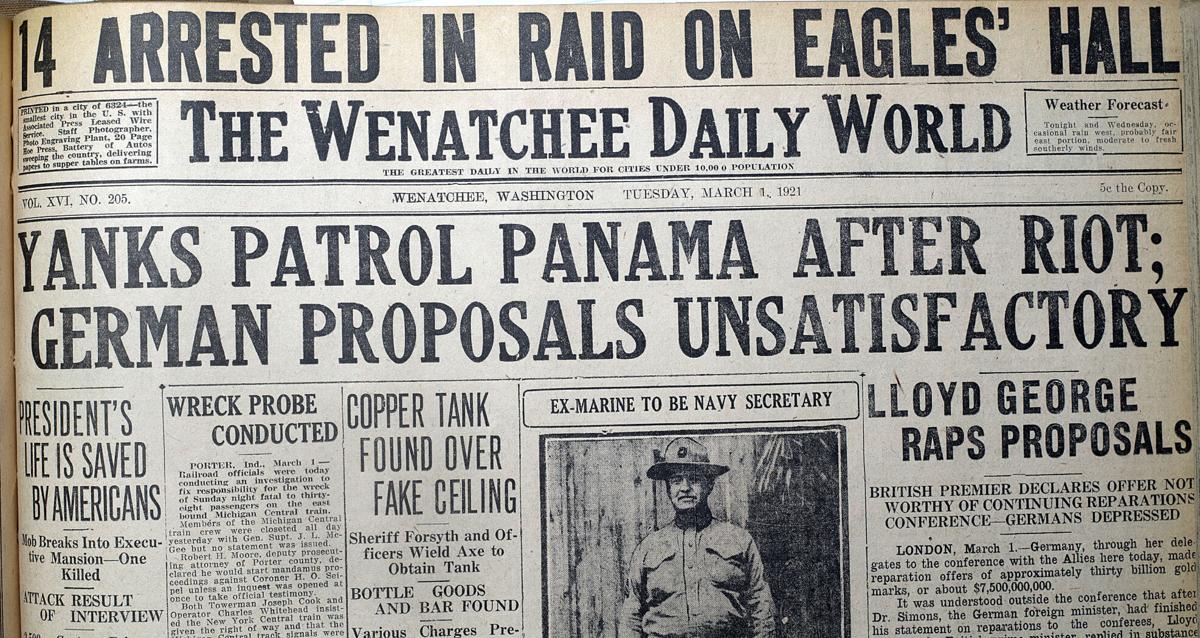 A raid on the Eagles' Hall in Wenatchee was the banner headline in the March 4, 1921 Wenatchee Daily World. 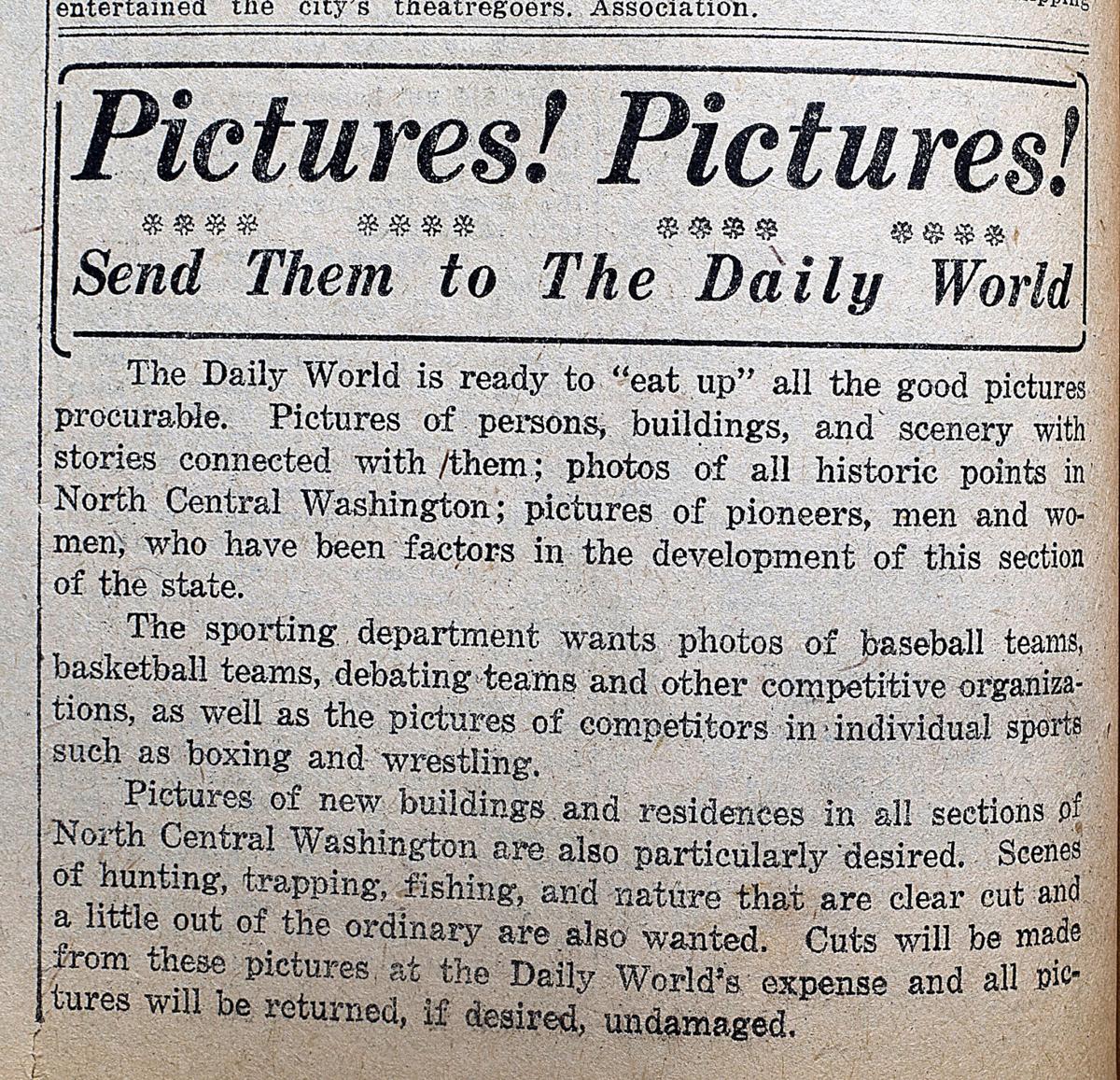 A plea for local photographs ran in the April 18, 1921 issue of The Wenatchee Daily World. 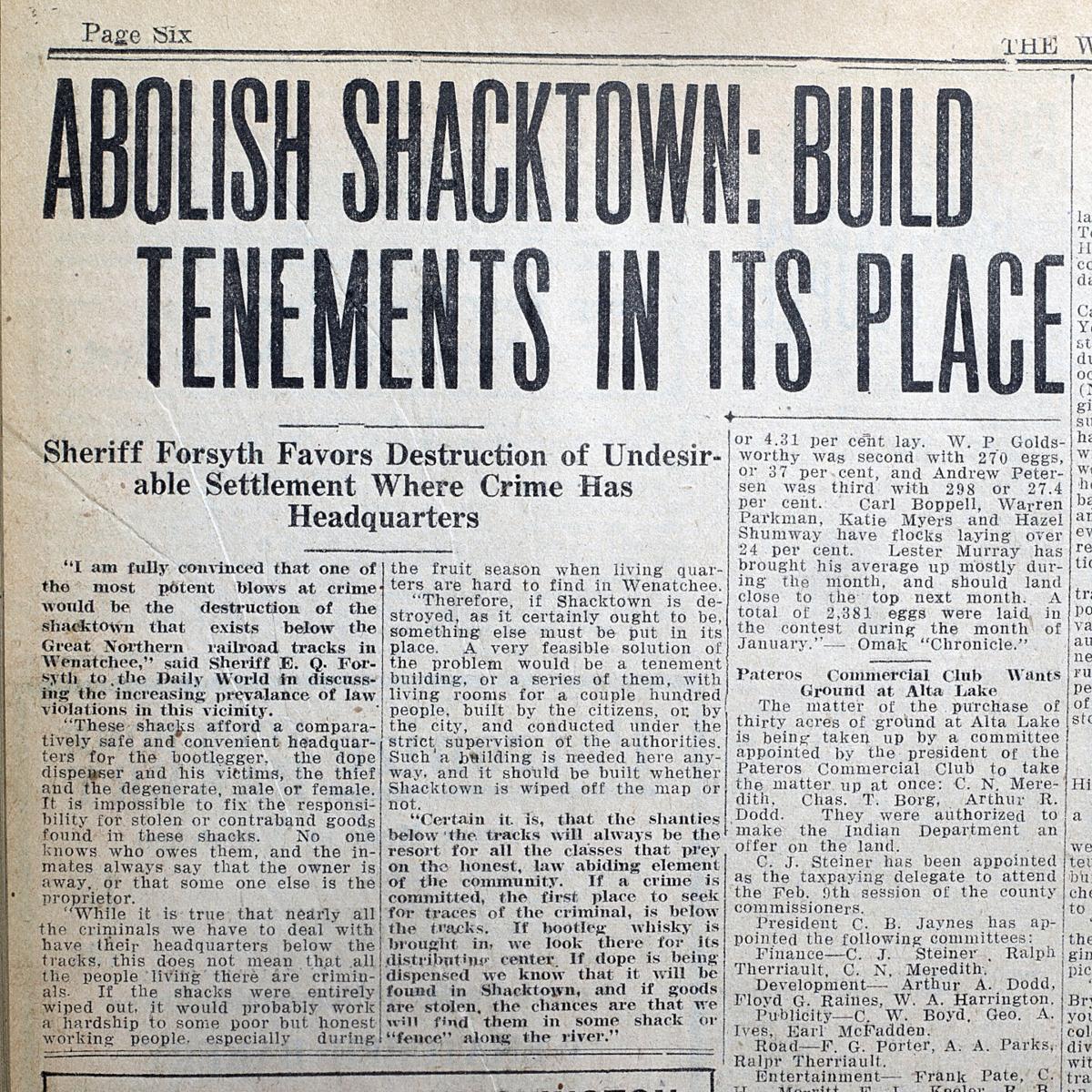 Shacktown, now Riverfront Park in Wenatchee, was the subject of an article in the Feb. 7, 1921 Wenatchee Daily World. 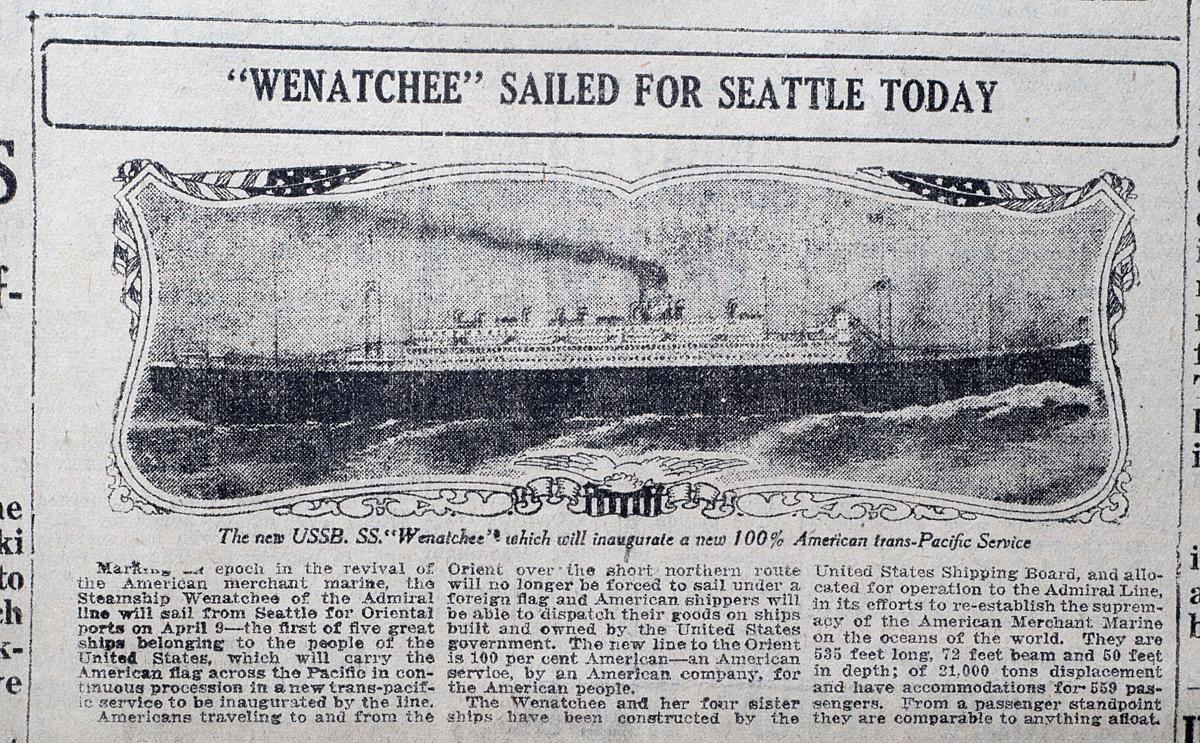 The SS Wenatchee sailed from New Jersey to Seattle on its maiden voyage in March of 1921. 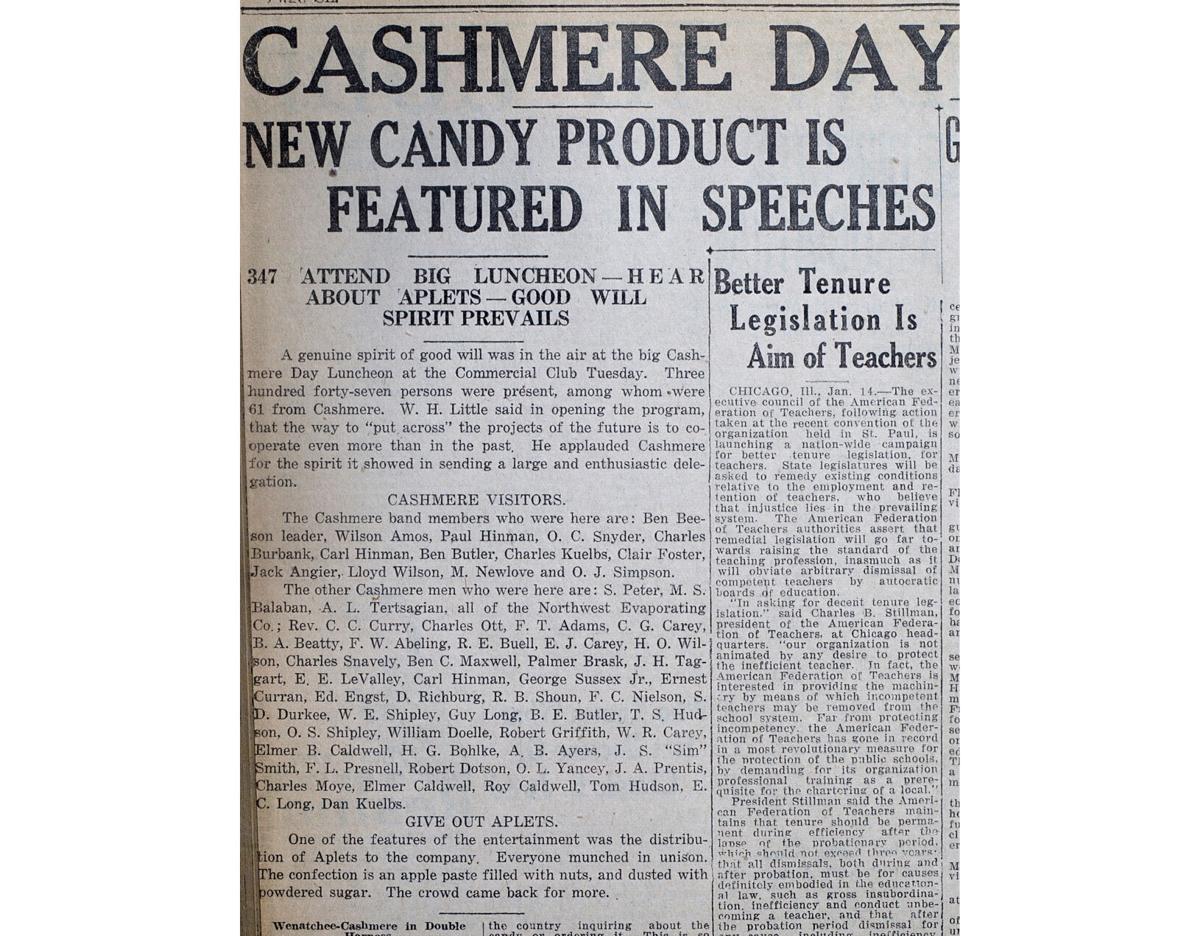 I’ve become somewhat of a historian at The Wenatchee World, not because I have any unique abilities; it’s more that I’m historical, having breathed Wenatchee’s apple-scented air for over 60 years.

So when tasked with digging up archive clippings from our dusty, large, and, I’m realizing, heavy volumes from 100 years ago, their age is not that far from where the apple falls — so to speak.

What I’m finding in the yellow-tinted pages are wonderfully written stories in intimate detail of homesteaders both struggling and having a grand old time while living life in North Central Washington in the 1920s. Here’s a sampling of what I discovered earlier this week.

Aplets candy is tasted in Wenatchee for the first time at a luncheon held at the Wenatchee Commercial Club. In the Jan. 26, 1921 Wenatchee Daily World: “A genuine spirit of good will was in the air,” the article declares in its lead. “One of the features of the entertainment was the distribution of Aplets to the company. Everyone munched in unison … the crowd came back for more.”

Did you know there was a steamship named the SS Wenatchee? The ship was built in New Jersey, intended to first be a hospital ship and then a troop transport for World War I. When the war ended before its completion, it was outfitted as a luxury liner. It sailed to Seattle on March 12, 1921, and became the first United States commercial ship with a route between the West Coast and the Far East. Later, it was fairly quickly renamed and was used in World War II. There will be more about that in an Old News entry on Feb. 6.

“Abolish Shacktown: Build Tenements in its place” a headline proclaims from the Feb. 7, 1921 edition. The Chelan County sheriff claimed crime had its headquarters there. But the article showed a compassionate side of the city. “If the shacks were entirely wiped out it would probably work a hardship to some poor but honest working people especially during the fruit season when living quarters are hard to find in Wenatchee.”

Sometimes, the criminal reporting of Wenatchee had its comedic side. The city had voted to be a “dry” town, so enforcing Prohibition was a priority and also brought out the ingenuity of Wenatchee’s finest violators. “14 Arrested in Raid on Eagles’ Hall” ran as a banner headline on the front page of the March 4, 1921 Wenatchee Daily World. The story talks about a police raid on the afternoon of March 3. Police were able to get a key to all the rooms at the club from “a man who carried a flask of moonshine … Several times the entire premises were thoroughly searched without revealing the hiding place of reserve stock. Suddenly Sheriff Forsyth noticed that the ceiling of one of the locker rooms was lower than that of the rest. An axe was used and the false ceiling pried off. Above it was found a copper tank which fitted into the space… holding about 10 gallons. Copper pipes connected with the bar so that by simply turning a tap a supply of red moonshine could be made available to the thirsty.”

Stories about growing apples included the “Real Evils of Consignment,” tips on applying “Arsenate of Lead,” and the occasional fun feature including this doozy from April 15, 1921: “Trained Gopher Shows How Farmer Should Catch Him.” This story talked about Leo Couch and his trained gopher that would burrow a hole and cover the entrance behind him. Couch would then dig him out and put him back into his cage. The trainer would then talk about how to destroy it and its gopher tribe.

I’m looking forward as I continue dusting off the bound volumes and gleaning the sweetest photographs and stories in the weeks to come. Who knows, maybe in the year 2120 a future historian will look back at the stories from this past year. May God help them reaping that news!