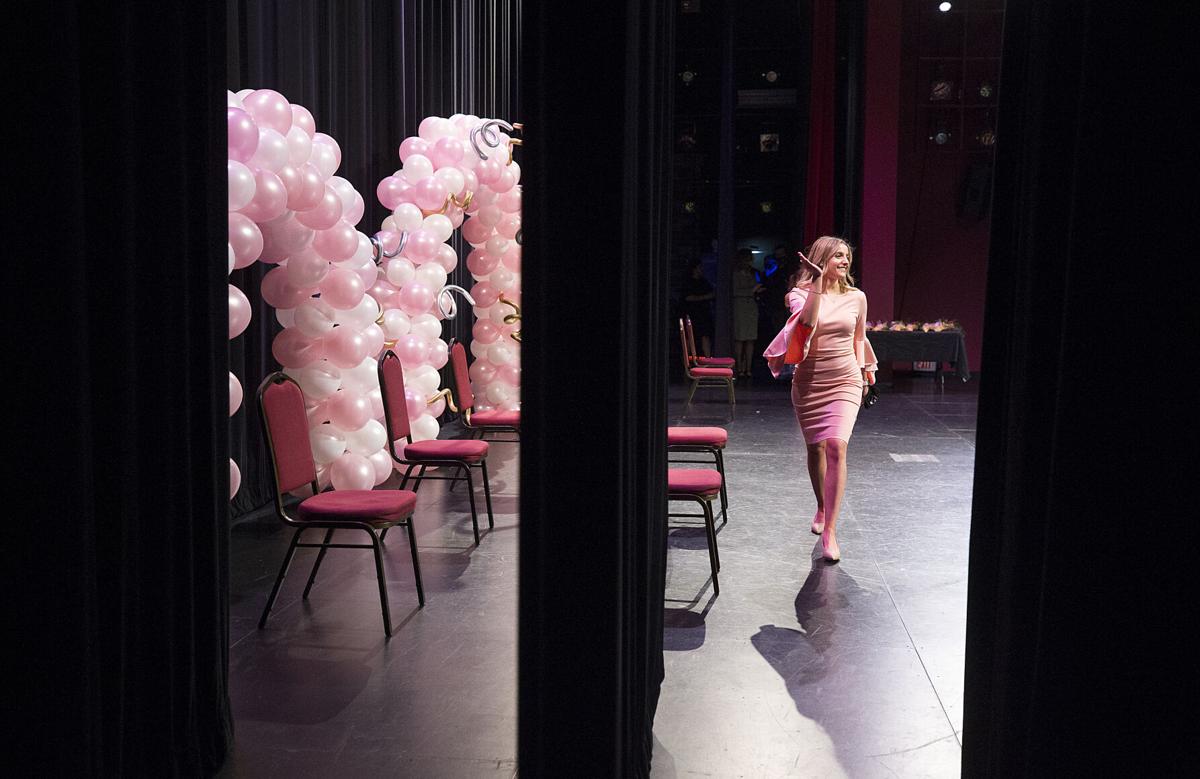 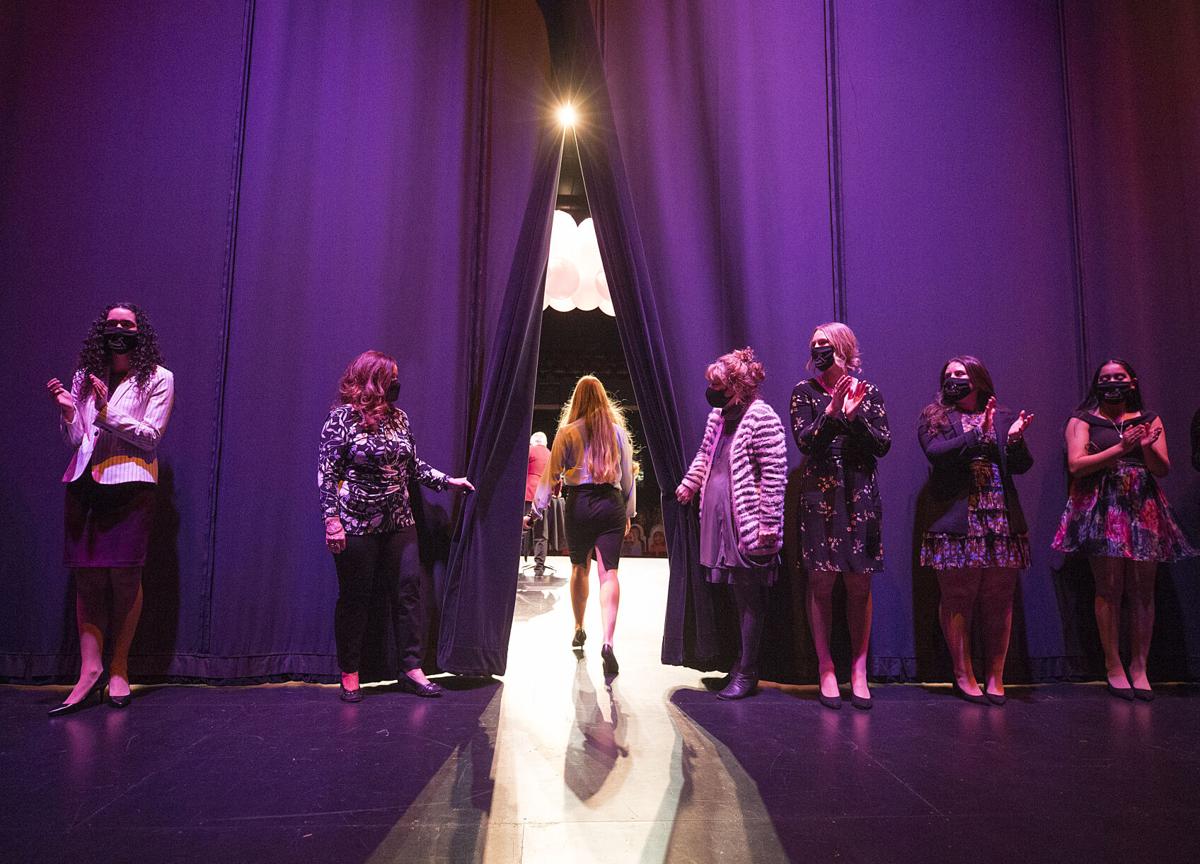 Olivia Fonville enters the stage after being announced as an Apple Blossom top ten candidate at the Numerica Performing Arts Center Tuesday, Jan. 26, 2021. 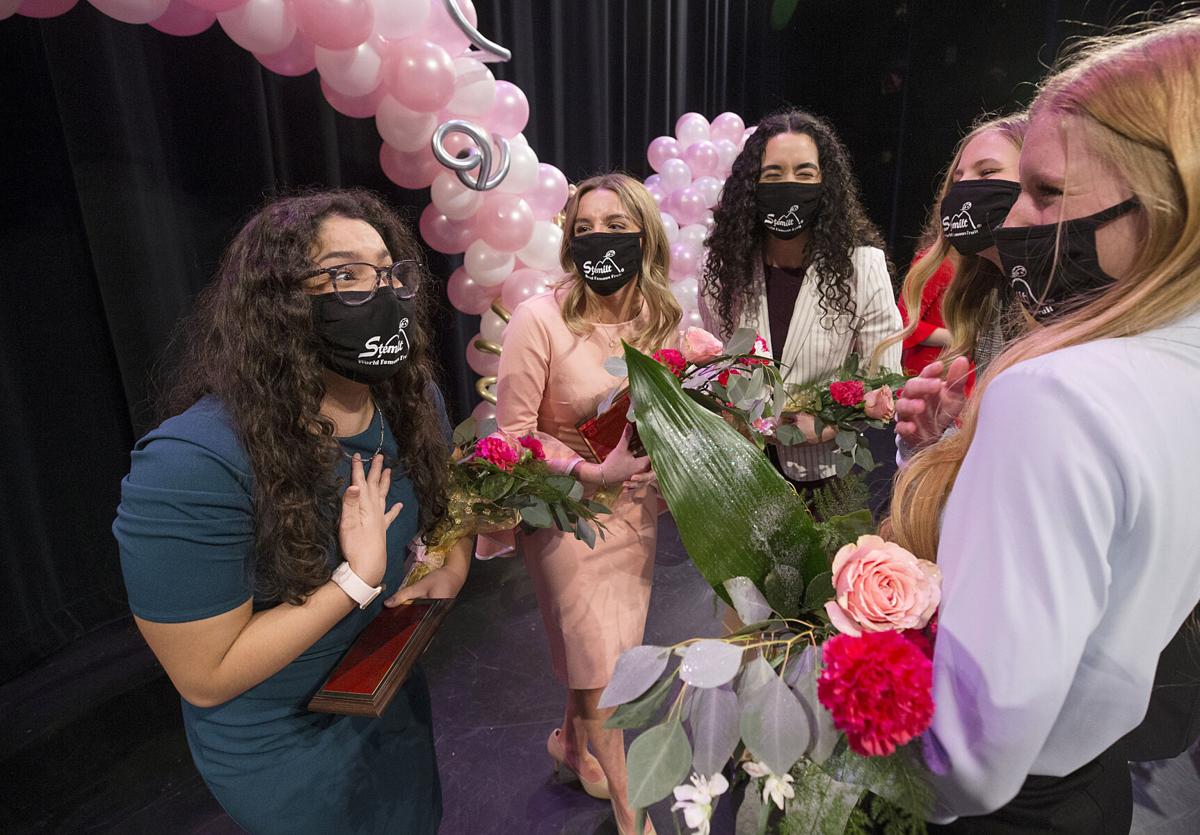 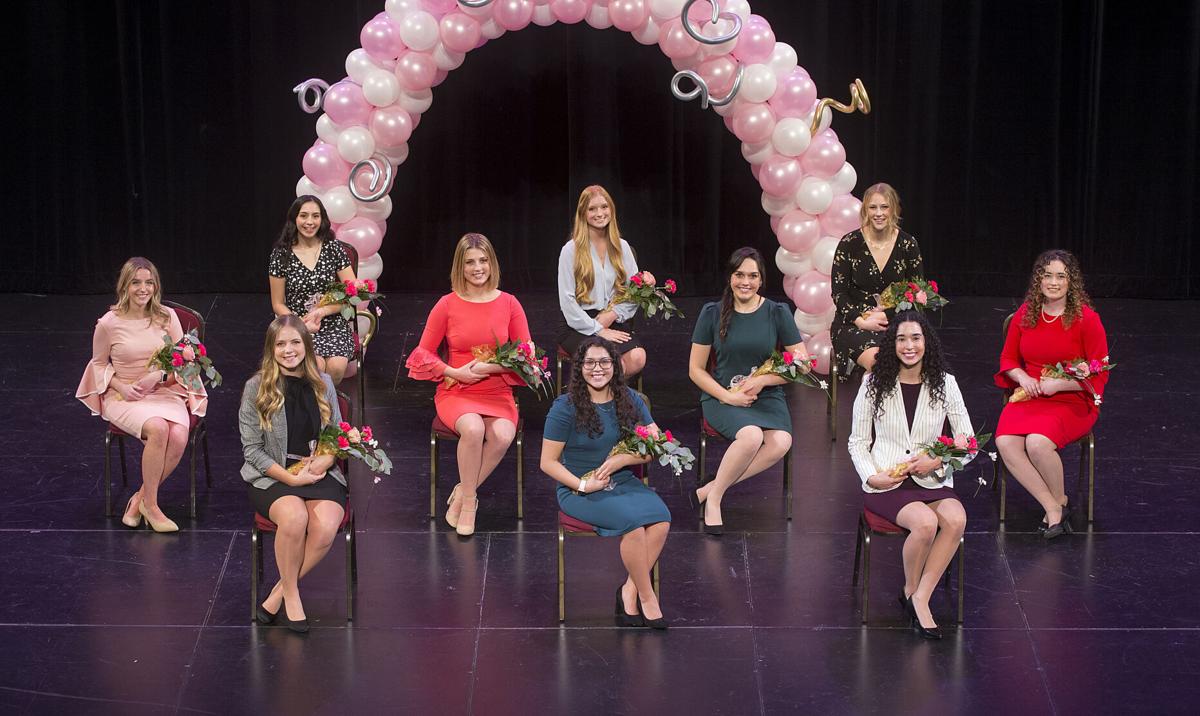 World photo/Don Seabrook The 2021 Washington State Apple Blossom Festival top ten royalty candidates were announced at the Numerica Performing Arts Center Tuesday night, Jan. 26, 2021. They are — (E) from Eastmont and (W) from Wenatchee — from left to right. Front row: Kaylynn Schmitten (E), daughter of Brent and Angela Schmitten; Olga Murillo (E), daughter of Ismael Murillo and Margarita Rodriguez; and Brooke Perez (E), daughter of Luis and Sundi Perez. Middle row: Libby Gallaher (E), daughter of Bob and Michelle Gallaher; Tatum Kentnor (W), daughter of Todd Kentnor and Tracy Trotter; Kamryn Fowler (W), daughter of Steve and Melissa Fowler; and Kody Richards (W), daughter of Gregg and Faith Richards. And back row: Sophia Hernandez (W), daughter of Miguel and Ana Hernandez; Olivia Fonville (E), daughter of Jason and Shelley Fonville; and Alex Toth (W), daughter of Andrew and Connie Toth. In the weeks before the Virtual Royalty Selection Pageant on Saturday, Feb. 27, the candidates will be interviewed by the media, tour local businesses, and be prepared for public speaking. The pageant, where the girls will vie for queen and two princesses, will be broadcast live by NCWLIFE and covered by The Wenatchee World. Scholarships worth $31,000 will be awarded that night. 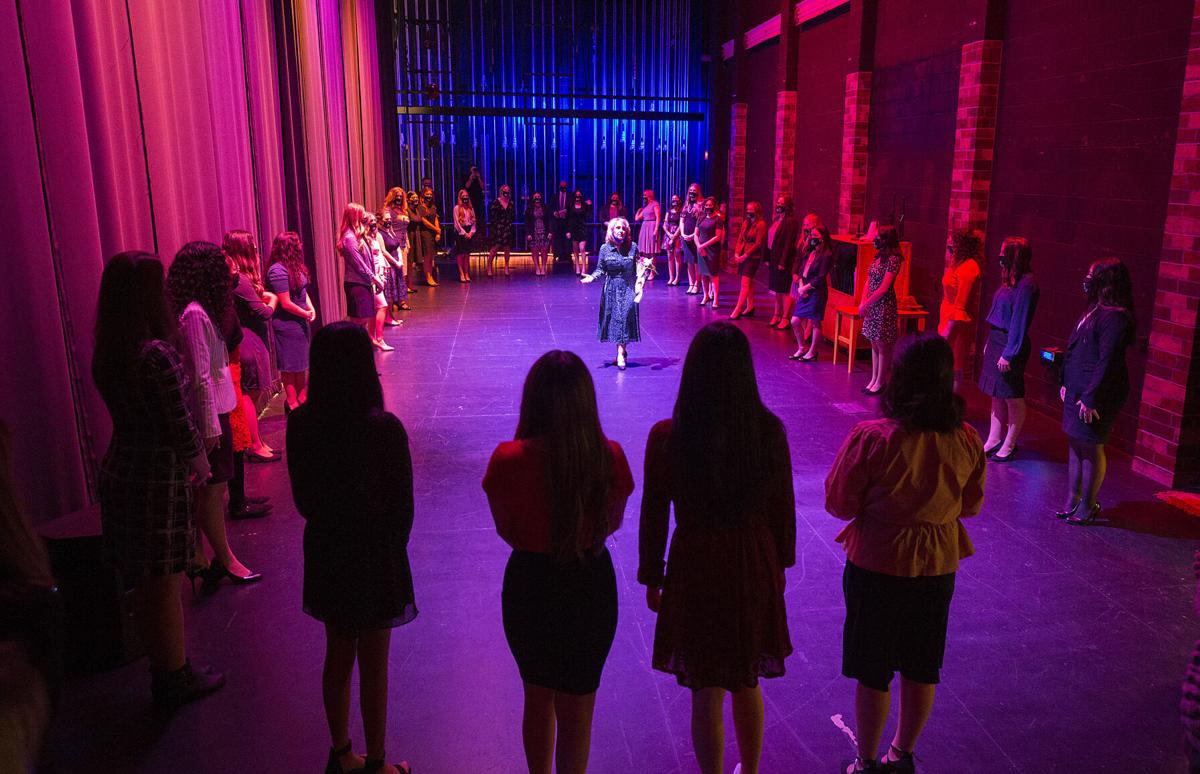 Washington State Apple Blossom Festival Administrator Darci Christopherson addresses the young women vying for the top ten before their selection behind the curtains at the Performing Arts Center Tuesday night, Jan. 26, 2021. This was the first time the complete group had been together after practicing in four separate groups. 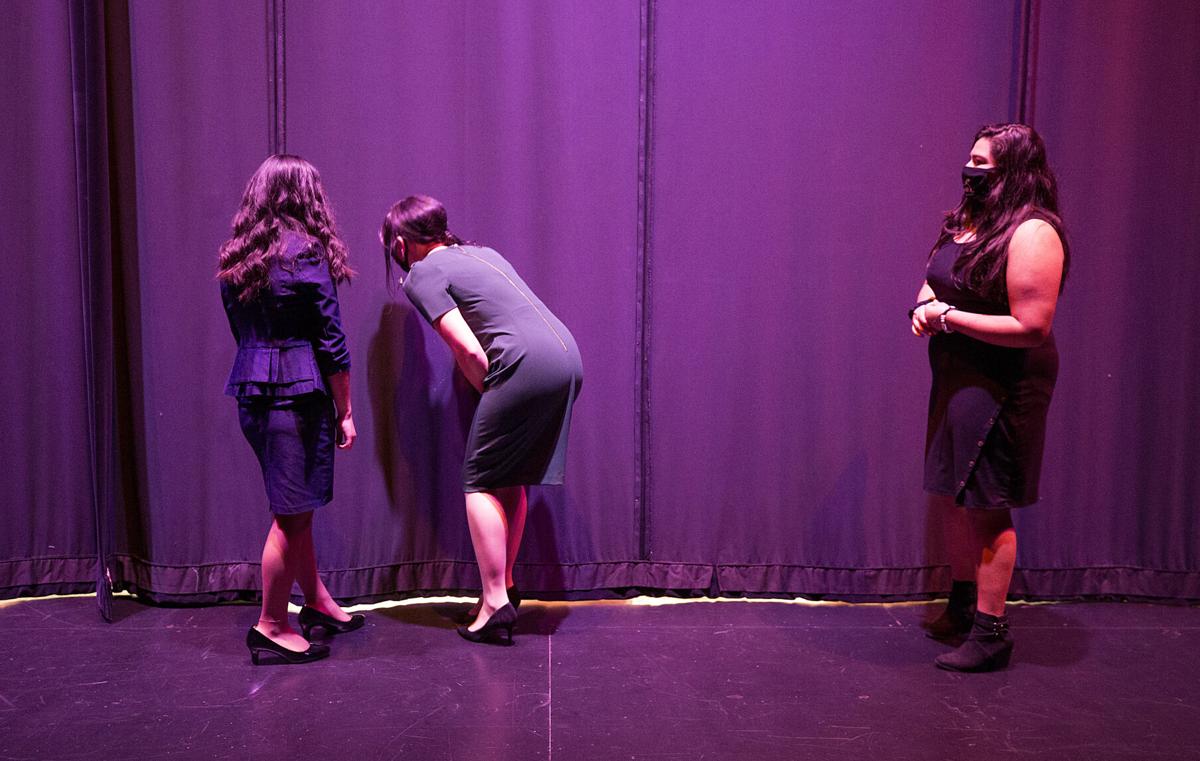 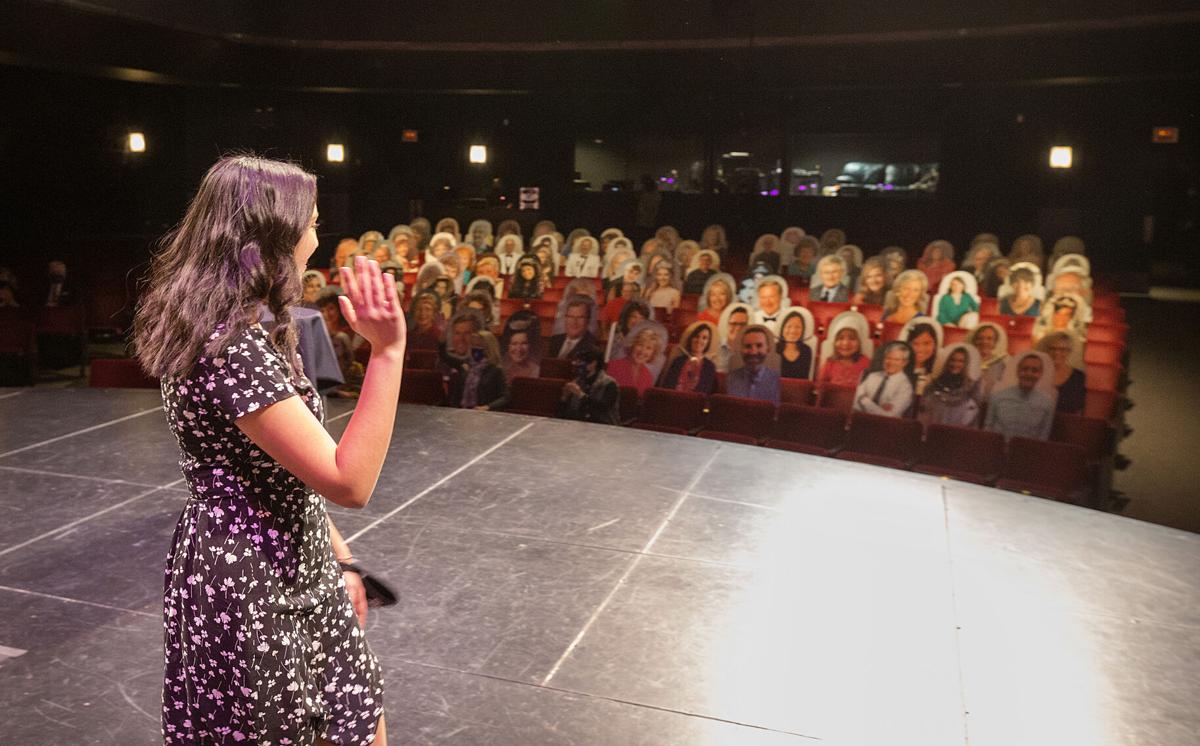 Sophia Hernandez waves to an audience of cardboard cutouts while practicing a walk-thru with the Apple Blossom Festival candidates before the announcement Tuesday night, Jan. 26, 2021. The cutouts are a fundraiser for the festival and will be used during royalty selection night too. Your image can be included with a $50 donation by signing up at appleblossom.org.

Apple Blossom’s top 10 royalty selection was held last week and organizers were able to make the event seem somewhat normal even with girls masking when together and no one in the audience at the Performing Arts Center.

The 30+ girls from Eastmont and Wenatchee high schools had been meeting in four different groups before selection night and I made this photograph as they saw each other for the first time. Festival administrator, Darci Christopherson, in the center, exclaimed at the large size of the group when they all came together just before the top 10 were announced.

When I first arrived at the PAC, I noticed the cutout figures in the seats and tried to figure out a way to incorporate them in a photograph. It meant being on stage during the live television broadcast of the event and that wasn’t an option. But the organizers wanted the girls to practice their introduction before the show so I got my chance to photograph them as they walked in front of me, waving to the “audience."

I took pictures of about a dozen candidates walking by and selected one to publish with a finalist so I could identify her by name.

Waiting backstage with all of them, I happened on a pair of candidates looking through a hole in the curtain but I’m not sure what they saw except for the cardboard cutouts.

At the start of the televised show, I found a spot by the side curtains to photograph the candidates walking toward me during the introductions. I like this shot because it conveys a sense of distancing.

When the top 10 girls’ names were announced, volunteers opened the curtain as they stepped through. I thought it was great that a spotlight was centered at the top of the opening.

I had wanted to dash over to the room where the parents were being kept, separated from their girls and each other, but couldn’t make it in time. I was wondering what their reactions were when their daughters won a spot on the top 10.

When all 10 were selected, everyone waited for the television broadcast to end, then the girls gathered in small groups to congratulate each other. It was a bit anticlimactic compared to other years as they were trying to keep at a distance from each other.

It was time to take a portrait of the 10 and with the help of Jeremy Anders we arranged the chairs in a pattern that would keep the girls 6 feet from each other — I needed a photograph without their masks on.

I was thankful that with the help of the PAC crew, the lighting on stage was bright and even. I was thankful to the festival crew to give me access and time to take the portrait. And I was thankful I had brought a tripod with me to shoot the photograph from the balcony with a long lens.