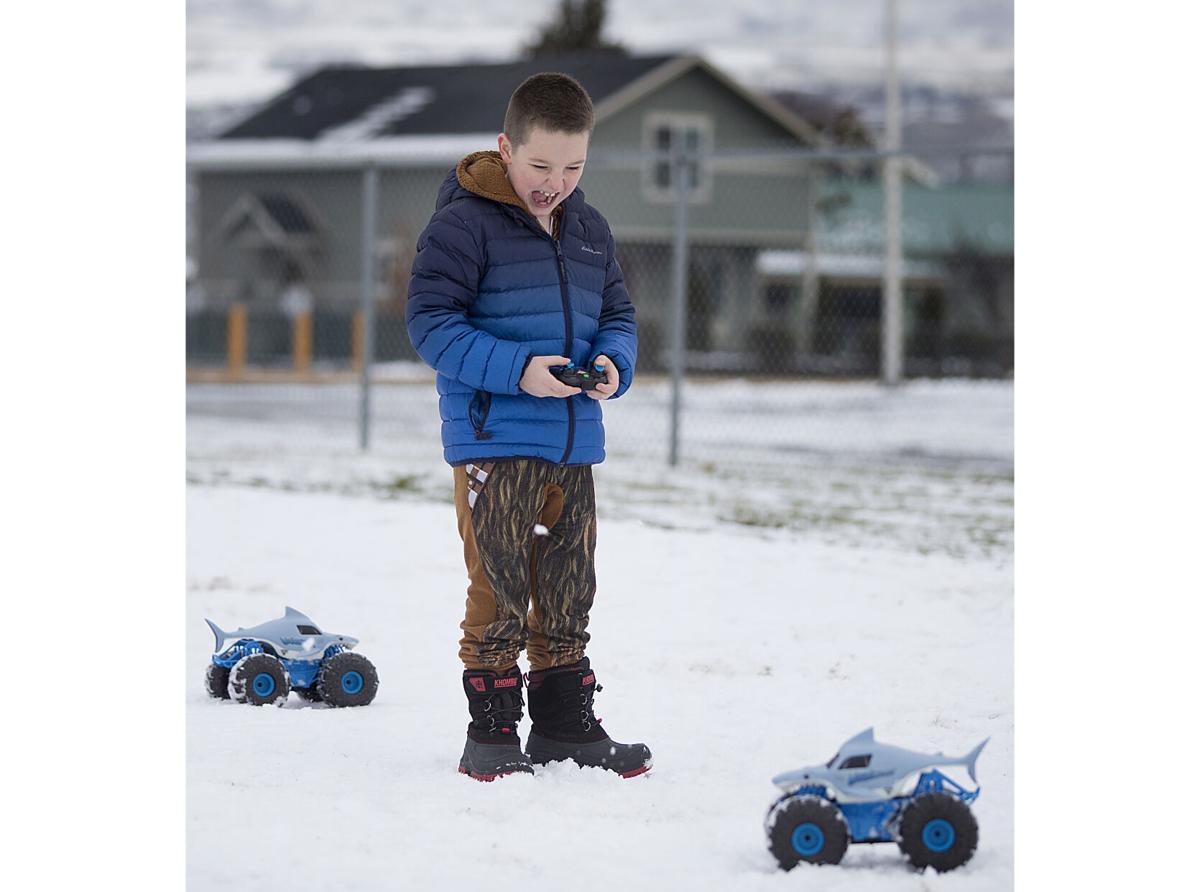 Drake Smith, 8, Wenatchee, has fun playing with his newest Christmas gift, a remote control car called a Monster Jam Megalodon. His brother Hayden's is seen behind him. They ventured to Triangle Park in Wenatchee on Monday, Dec. 28, 2020, to try them out in the snow. School is out for local children during the holiday break. 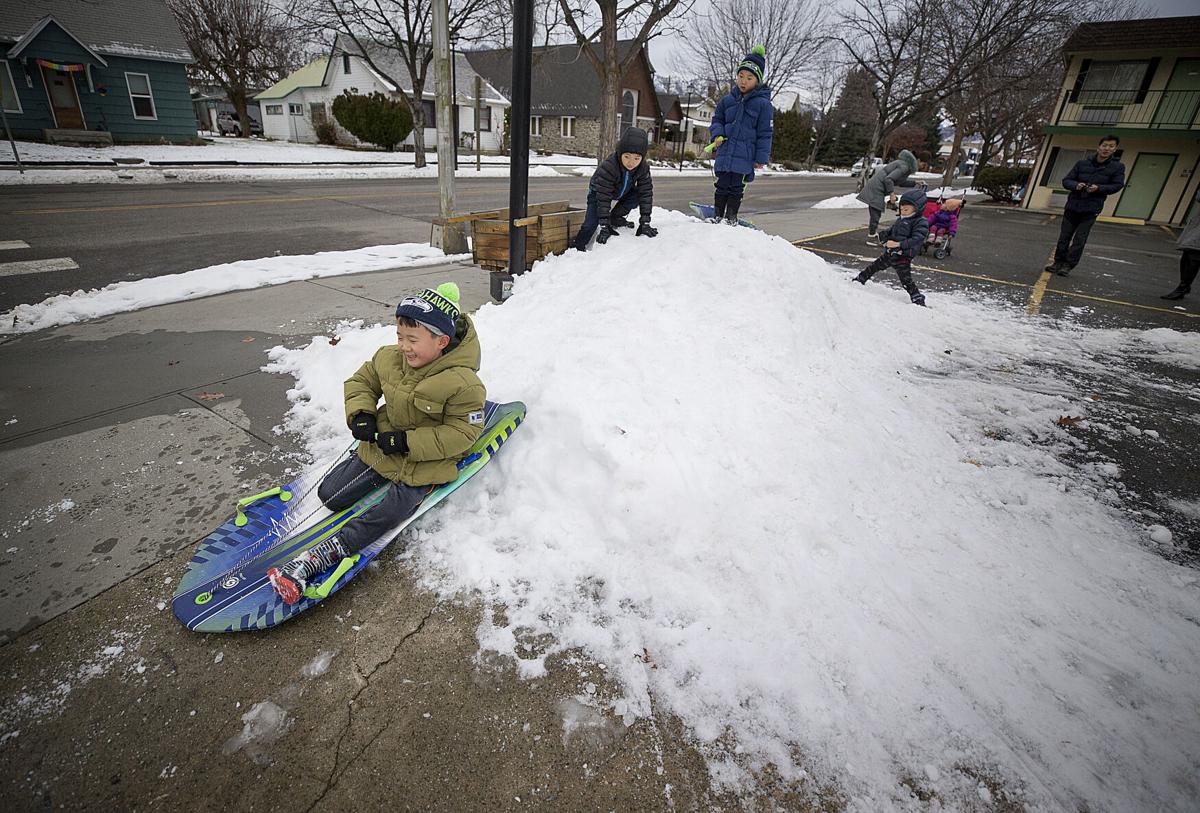 Finding a small sledding hill in a Cashmere parking lot, children from Tacoma sled with family friends Tuesday, Dec. 29, 2020. With snow melting in the Wenatchee Valley, sledding hills are becoming harder to find. 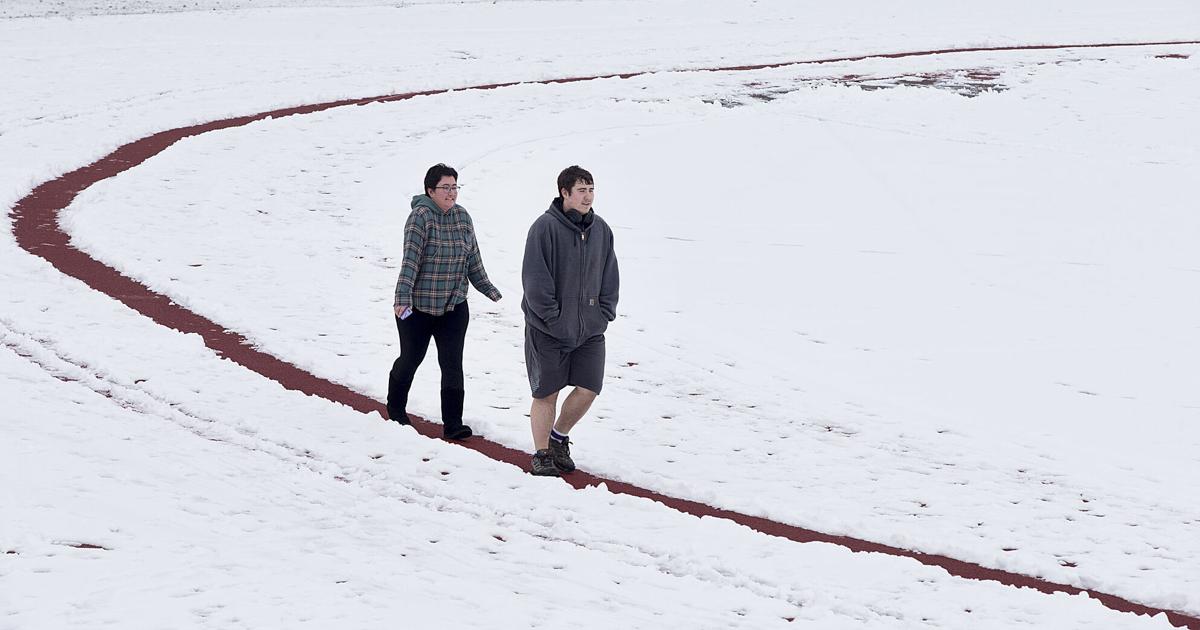 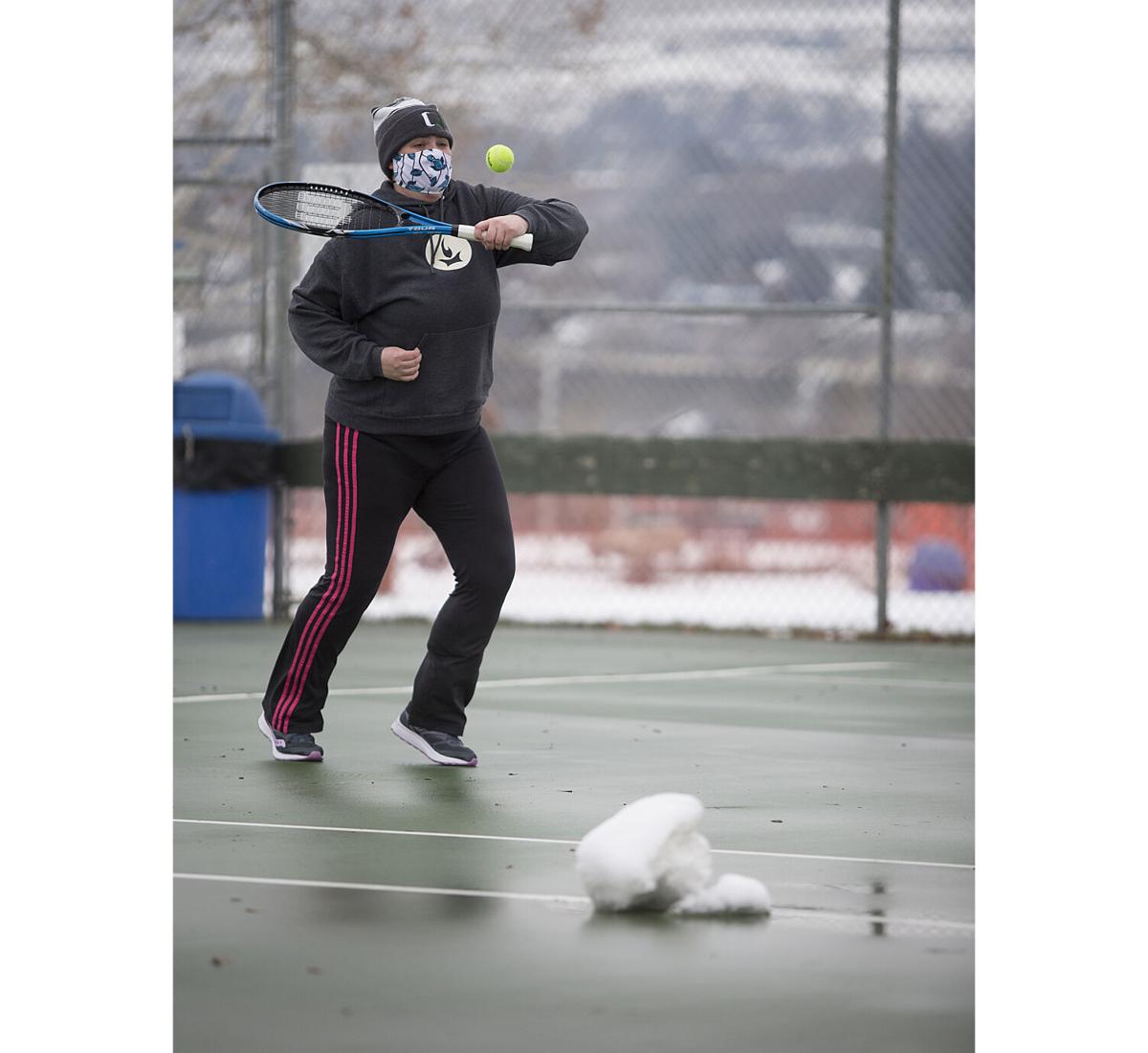 Caitlin Honig, Seattle, hits a tennis ball back to her husband Ryan, during a game with their family and friends at Walla Walla Point Park on Friday, Jan. 1, 2021. She said they got racquets for Christmas and are trying out the sport because they live near courts at their house. 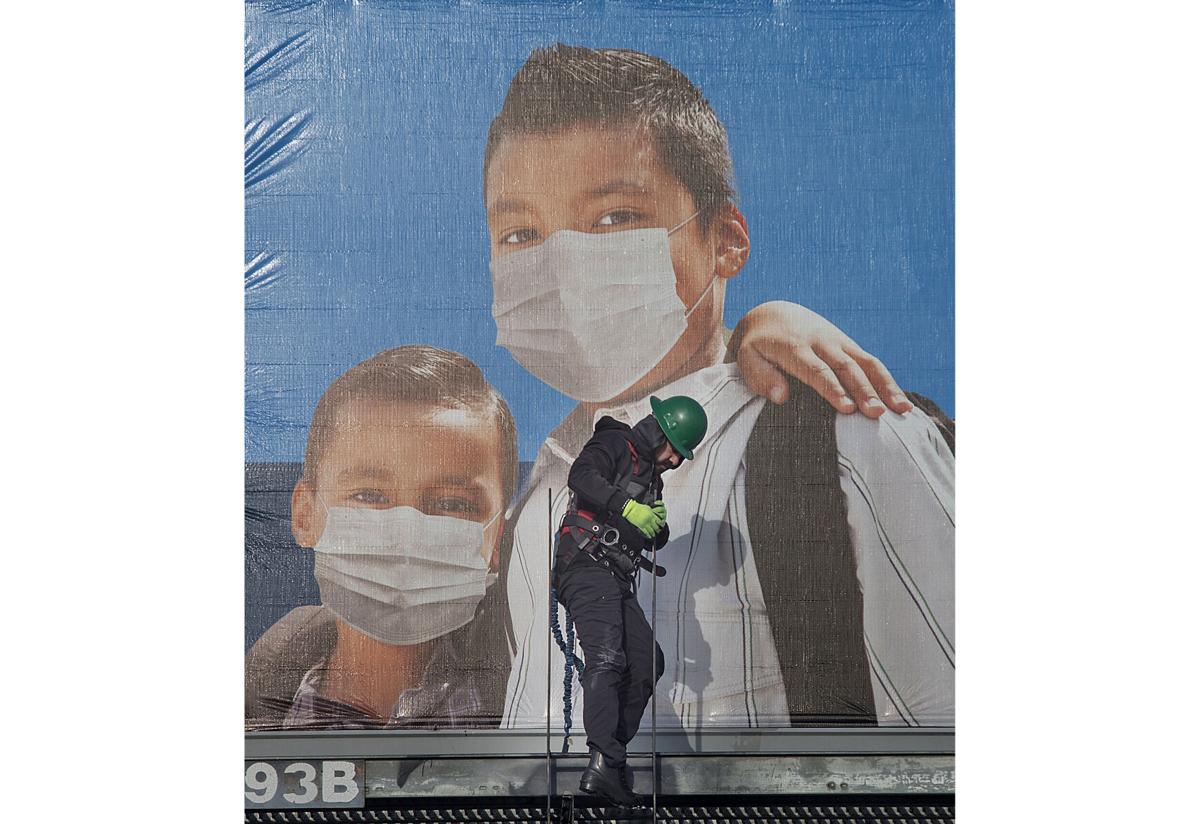 A sign installer climbs back down the ladder of a billboard he was working on in South Wenatchee Thursday, Dec. 31, 2020. The advertisement is paid for by the Chelan-Douglas Health District. 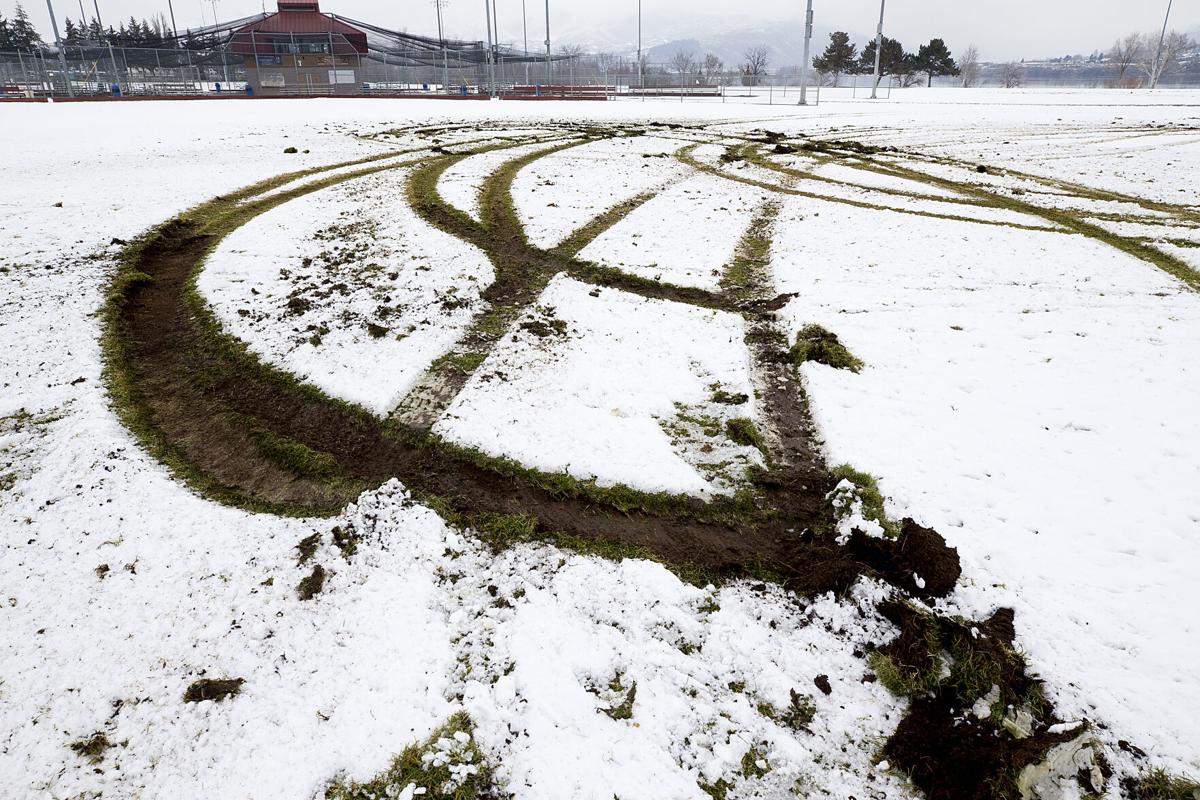 The outfield of a softball field at Walla Walla Point Park is ripped up from vandals Friday, Jan. 1, 2021.

The time between Christmas and New Years may just be the slowest news week of the year. It’s hard to get in touch with people, school is out, and many families are hunkered down in their warm houses.

Local news pages still need to be filled so I spent many hours looking around the Wenatchee Valley for people doing something interesting or at least somewhere interesting.

That Monday, Dec. 28, I saw Andi Tarr and Jaydan Deisler walking on the track at the Wenatchee High School athletic field, something not worthy of a photograph from a distance but when I got closer I saw someone had shoveled a narrow path in the snow that provided a graphic element. This made it a much better image and I photographed them as they rounded a corner.

Also on Monday, I pulled into the parking lot of Triangle Park when I saw a couple of cars parked there. It was then that I noticed two children playing with remote control cars. One of my goals for the morning was finding people playing with their Christmas gifts and Drake Smith’s expressions added an extra element.

The next day, I headed up the valley and saw children sledding on a small hill of snow built up by a snow plow in Cashmere. The unusual part to me was that they would finish their “sledding run” on pavement. I took a wide angle lens and shot from a high angle to show the pile, surrounded by blacktop. The child’s expression was what I had hoped for.

On Thursday, I spotted a sign worker on a billboard as I exited the George Sellar Bridge onto Wenatchee Avenue. I drove around the block and parked across the street. By the time I got ready with my camera, the workers had finished the installation and were heading down the ladder. I took a quick shot and thought I had missed anything worth publishing.

Driving away, the idea that this photograph showed the changes our community was going through hit me as did the title: “Sign of the times.” It ran on the front page of the weekend newspaper.

On the final day of the slow news week, I drove into Walla Walla Point Park and discovered four people playing tennis on a wet and snowy court. I originally figured on a tight photograph showing just the splash of water coming off a tennis racquet with a face nearby but the lighting was all wrong to show water and I focused on snow on and around the court. The group mentioned some had just gotten their racquets for Christmas and that detail added to the news interest.

And finally, I had also spotted some vehicle tracks leading to a softball field at the same park and discovered the work of vandals. I photographed the destruction of the turf with the snow providing contrast to the image.

Along with these photographic finds, there are many hours and miles spent looking for the possibilities of images. It would be easy to become frustrated when I come up with nothing concrete but I have a strong curiosity of people and situations that help me find feature photographs.

Photojournalist author Dave LaBelle is one of my favorites. In his book, “The Great Picture Hunt 2,” he wrote, “With feature hunting, the best photographers also develop a keen sense that allows them to be in the right place at the right time and even anticipate where good pictures might be.” I continue to work on growing that sixth sense.