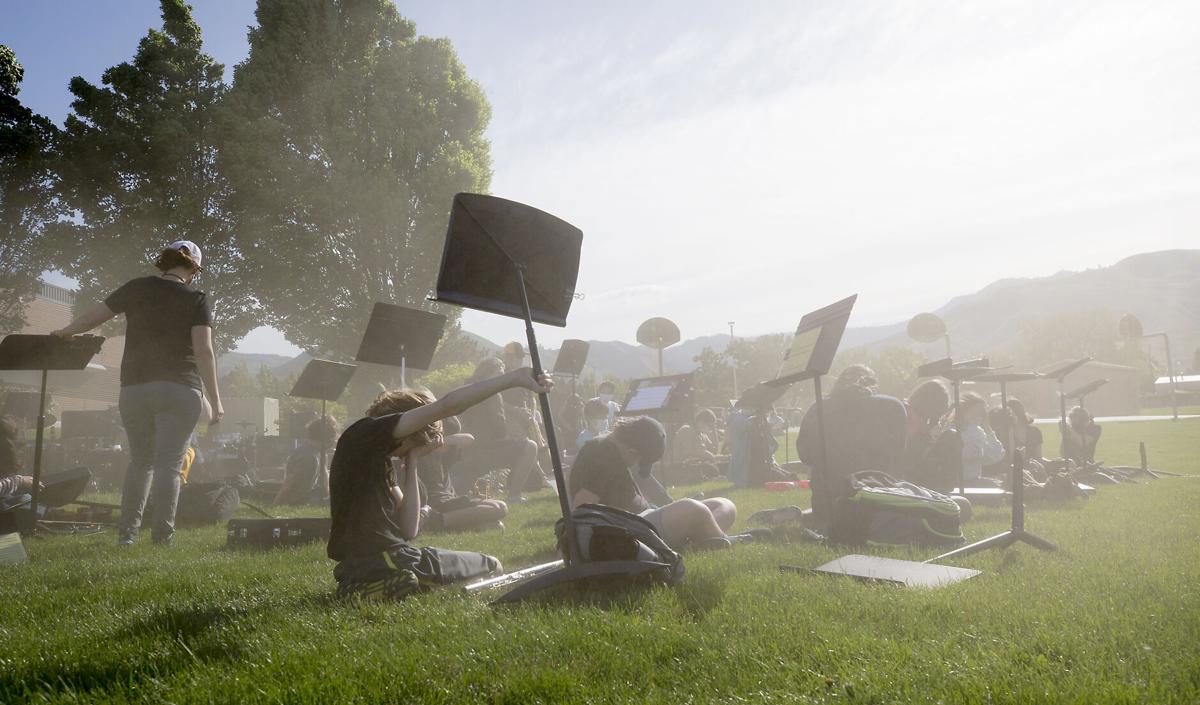 Wenatchee middle school band students hunker down when a gust of wind blows dust from a nearby baseball field through them Thursday at Foothills Middle School. The pep band made up of students from the three schools had gathered to play for over an hour during a soccer jamboree where their classmates were playing. 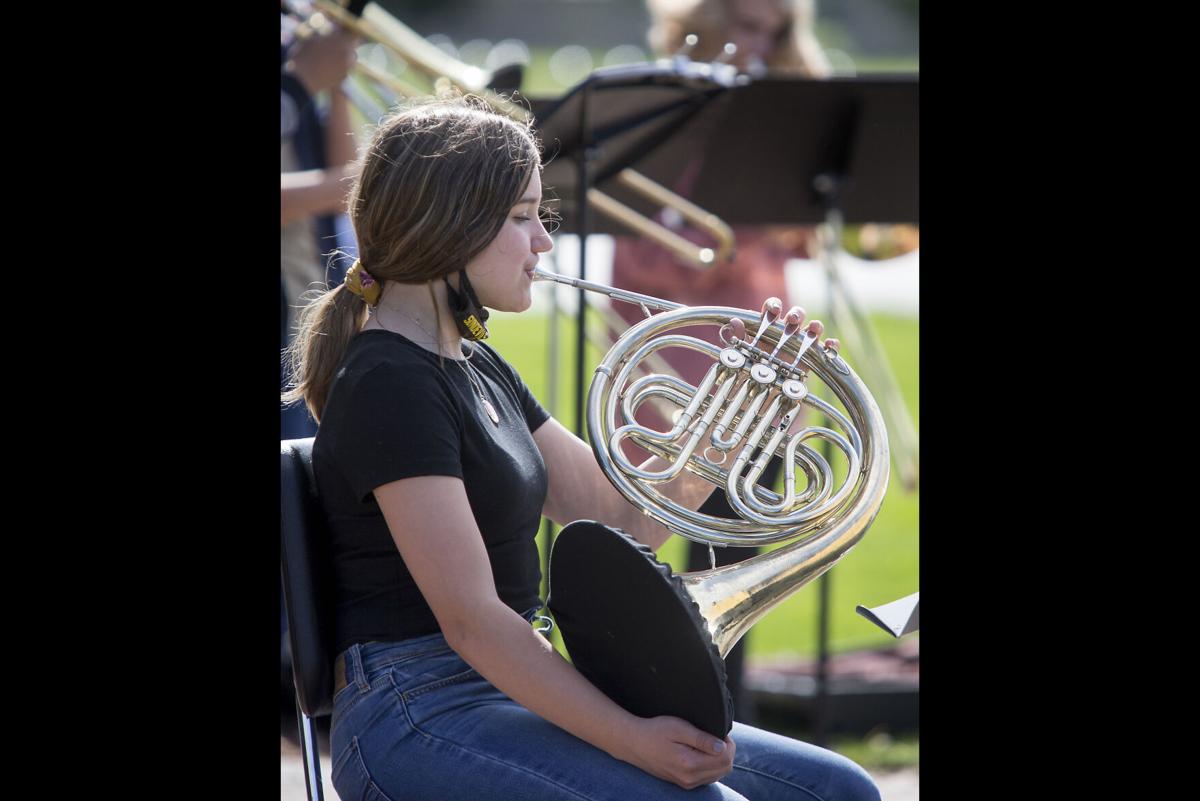 Clementine Belanger, 12, plays her French horn during the pep band performance Thursday. She said she normally plays in the school's orchestra. 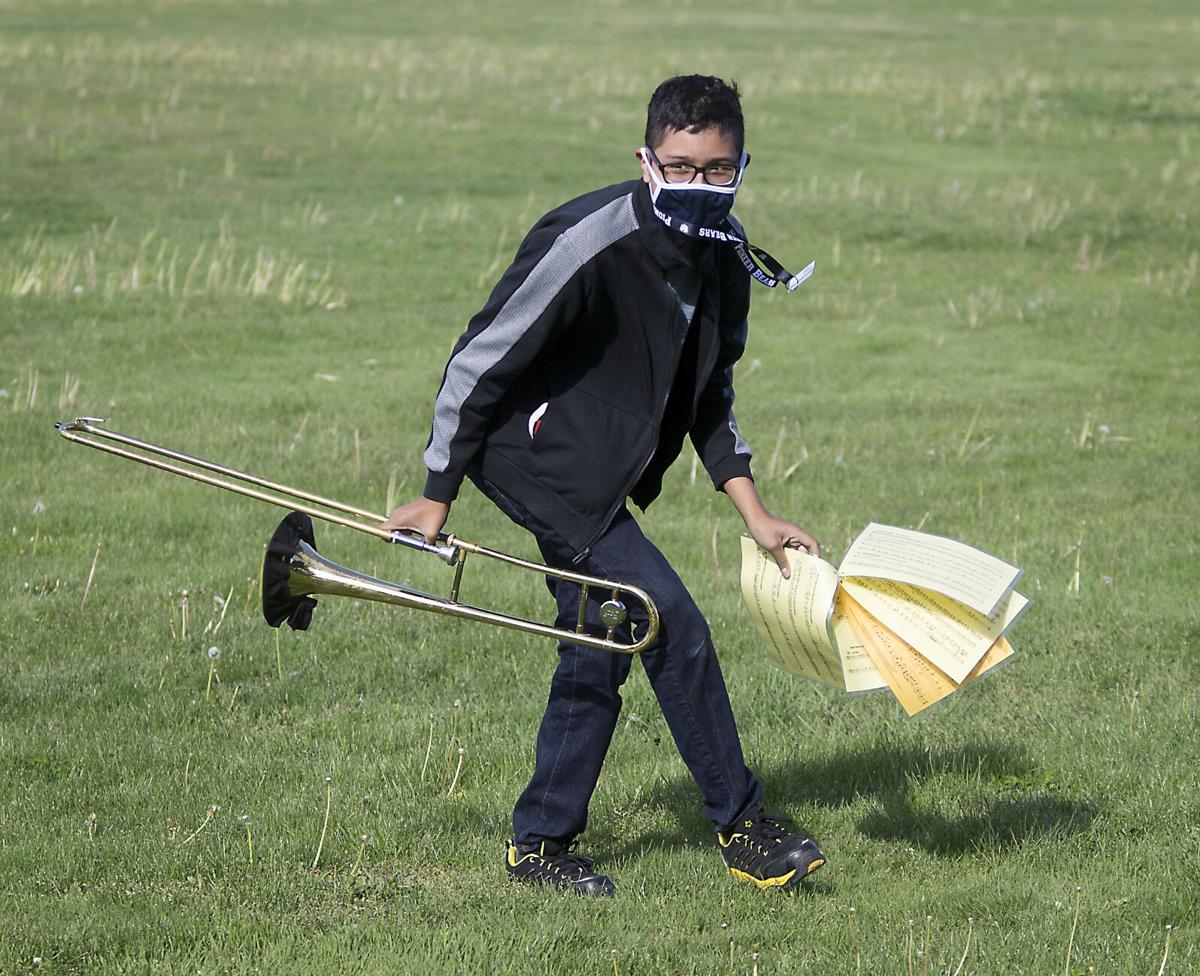 Leo Espinoza, 14, is able to grab his sheet music blown from him by the strong winds Thursday. 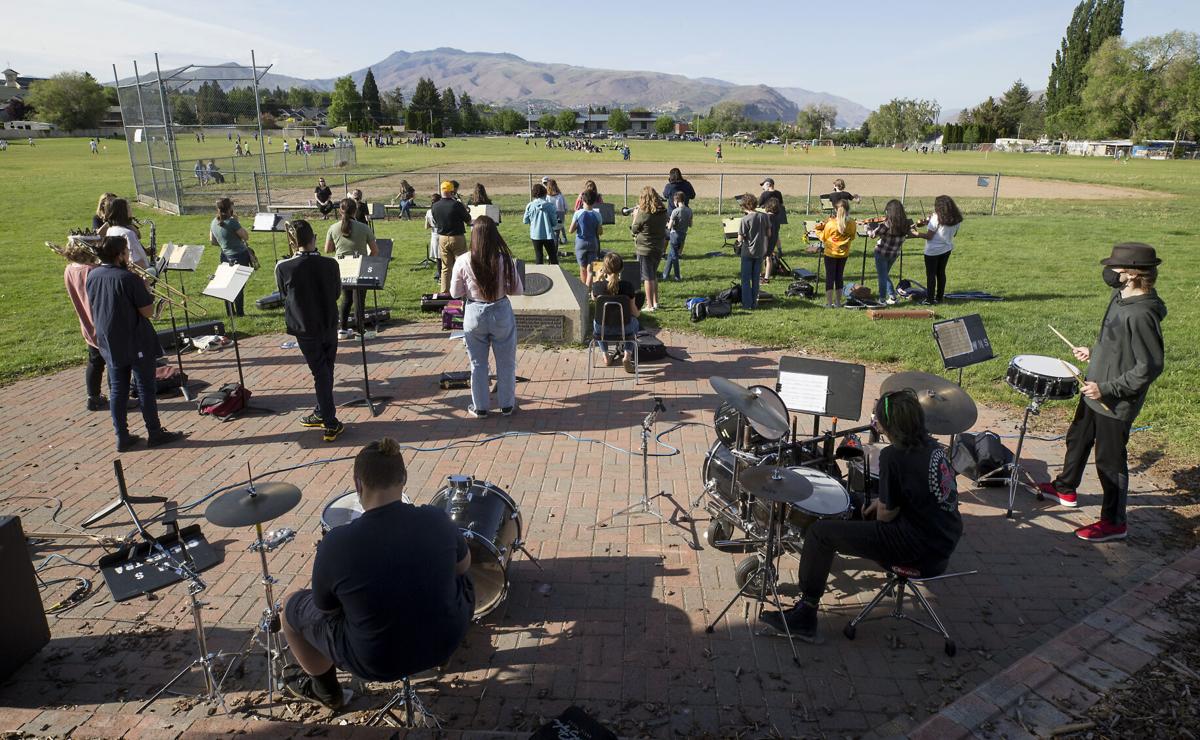 When I go out to photograph a story I have some idea what might happen — that’s what helps me decide what I’m going to cover for the day. But I try to be receptive to changes of what my focus will be.

That open-mindedness helped Thursday when I went to cover Wenatchee middle school bands playing for a soccer jamboree at Foothills Middle School.

It sounded like, and was a sweet little photo story about band directors getting their students together to practice and find a venue to play publicly, outdoors, safe from COVID-19.

As students began arriving and setting up their music stands, and those stands began to topple one after the other, I considered the story might divert to include how the kids would be struggling with the gusting wind.

I scouted out an area overlooking the field — the band in the foreground — for an overall photograph showing the 300 feet of distance the band was to the soccer games. The extension cord to the bass amplifier limited how close they could get — it only went so far from the outlet.

I moved to close-up shots showing instruments typically found in orchestras but being used in the pep band. It was the only band that would have school performances this year. I saw that the bells on horns were covered to protect from germs. I talked to one mother who found out a sock fit perfect over the end of her son’s trumpet.

The wind would gust through the band but I wasn’t able to capture the stands crashing to the ground, students making a desperate attempt to grab them. I was resolved to photograph musicians running after their sheet music as it blew east across the grass.

When the band started playing, I noticed one young flutist who would occasionally push his instrument into the air with the music. I moved into position to capture his excitement.

It turned out to be another failed attempt, and while members of the high school marching band arrived to talk to the eighth graders about joining them next year, we sat down in the grass. We were all listening to their presentation when a strong gust blew in from the north, gathering with it dirt from the infield of a nearby baseball field.

Kids playing kickball on the dirt had loosened some of the dry dust and it was pushed into the air, deposited on the band sitting on the grass. Instinctively I shot a photo from the ground while turning away from the dirt — my contact lenses wouldn’t understand the need to see what I was shooting — and captured this image of band members grabbing at their music stands, dust and sand blowing through.

In a position to photograph the excited flutist, my camera and location was set up perfectly for the backlit image.

I failed to capture the young musician with his flute in the air nor music stands falling in the wind but came back with other images that helped tell the story.