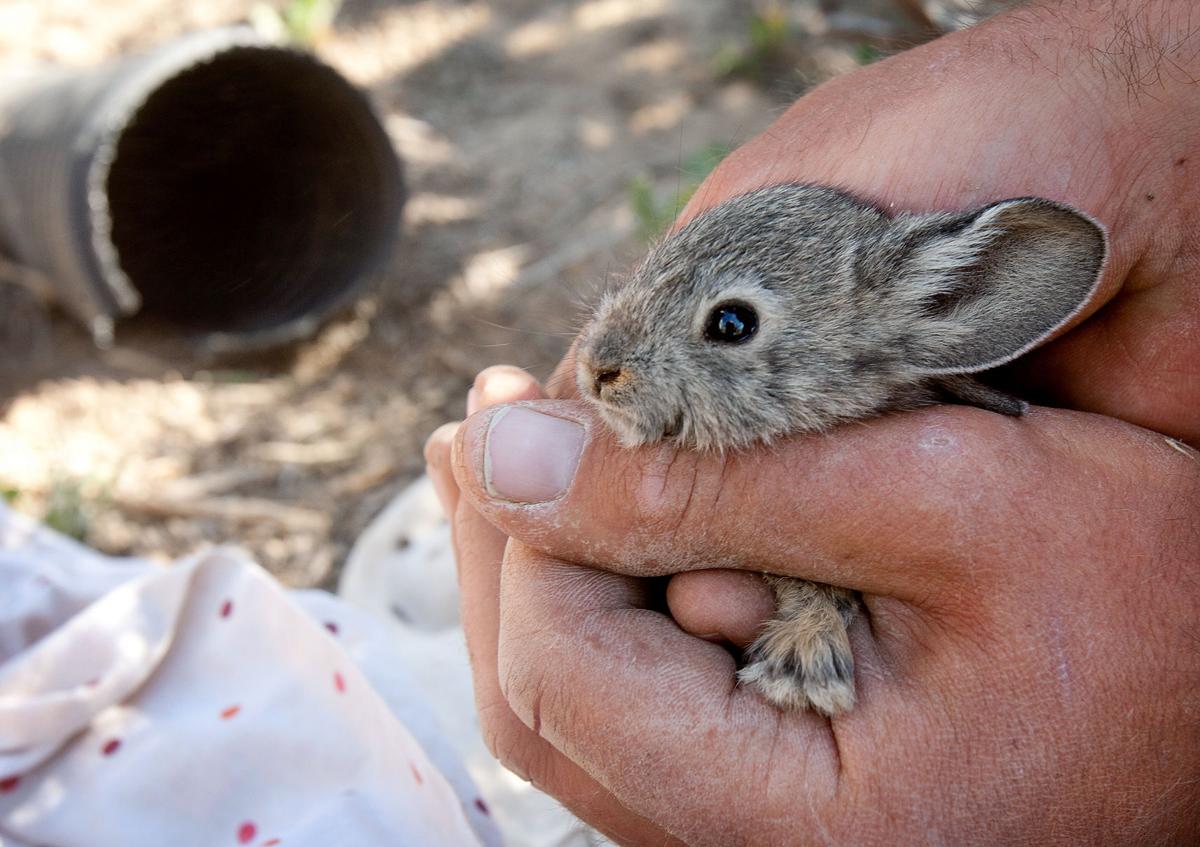 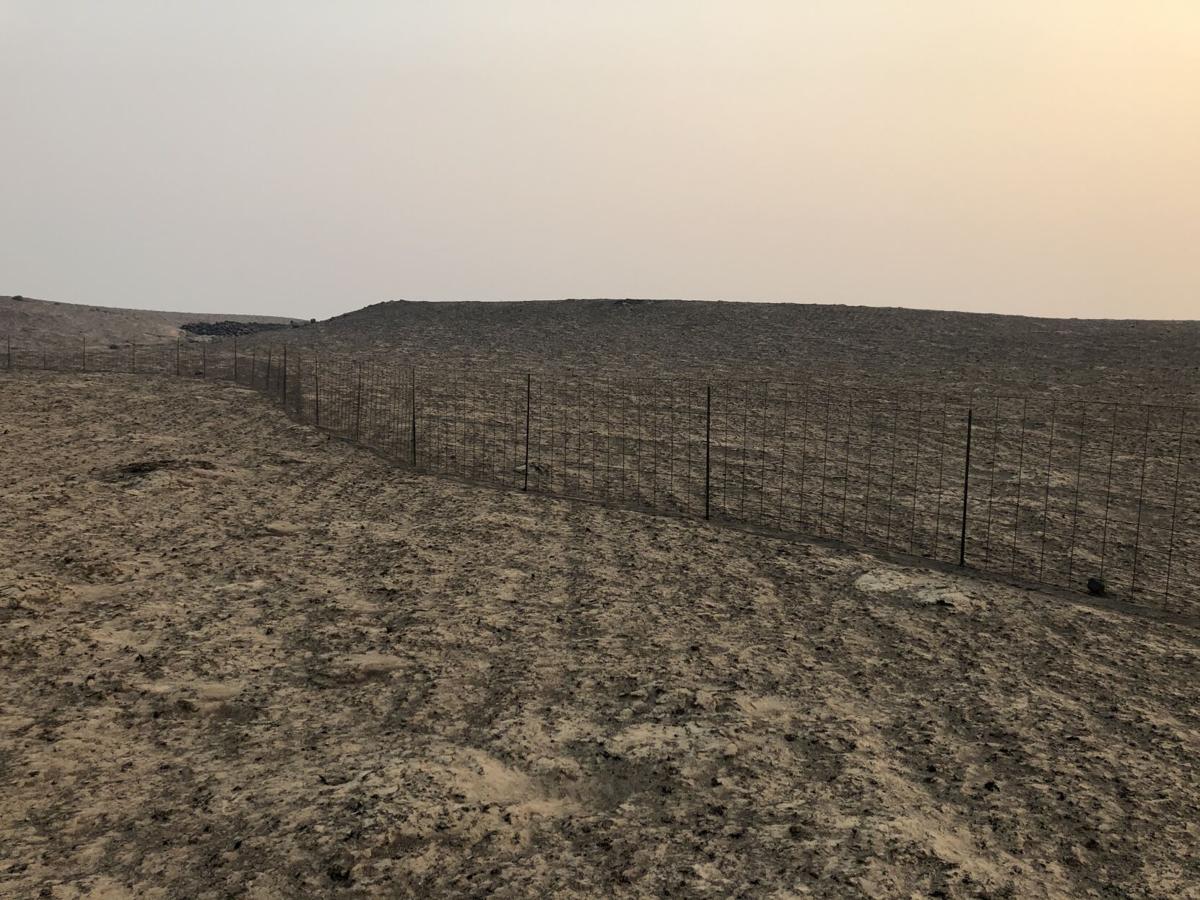 After the Pearl Hill Fire: The remains of the Jameson Lake preserve site that once held pygmy rabbits.

After the Pearl Hill Fire: The remains of the Jameson Lake preserve site that once held pygmy rabbits.

Where there once was sagebrush supporting half the remaining population of the near-extinct Columbia Basin pygmy rabbits, now there was only sand and dust, Gallie said.

“The sun was blotted out, it was just red from the fire glare and the smoke and all you saw was rocks and sand and dust, there was just nothing,” he said. “I have not seen a sagebrush fire that hot in my 13 years out here.”

The Columbia Basin pygmy rabbit is a species that has gone through a lot. In 2004, the species disappeared from the landscape and the remaining rabbits were bred in captivity at universities and zoos, until enough of a population was established to start reintroducing them in 2011.

Then in 2017, the Sutherland Canyon Fire destroyed one of the agency’s larger breeding enclosures in Beezley Hills, killing 85 bunnies, but 32 others survived.

This time there were no survivors at the Jameson Lake site. The Cold Spring Canyon fire killed half of the project’s entire rabbit population. Biologists still do have rabbits at Beezley Hills and Sagebrush Flats.

“When this happened in Beezley, we saw it right away, rabbits were popping out of their burrows,” Gallie said. “But everywhere we went this week, we saw absolutely nothing.”

In 2017, some of the rabbits were able to wait out the fire by hiding in their burrows, but this time the fire was just too hot, Gallie said.

“It was an extremely hot fire and pretty damaging to the infrastructure, but worse there was just no way that the animals were going to survive in their burrows with that kind of extreme fire conditions,” he said.

The biggest tragedy was to the wild population of rabbits that had just started to establish in the area, Gallie said. Biologists identified about 120 different rabbit sites over 1,000 acres of area, which could have meant anywhere from one to 120 wild rabbits.

“Unfortunately we lost a tremendous amount of recovery capital up there and the wild population that we had worked for three years to establish was starting to take off,” he said.

On Monday morning, biologists out of the regional office in Ephrata heard about the fire in Douglas County, Gallie said. They were considering going out there to rescue the rabbits, but based on the wind patterns they thought the rabbits would be safe.

“It was just gone in an instant, the wind shifted and pretty much, it went like 30 miles straight into Douglas County in a couple hours,” he said. “It was just so fast there was literally nothing we could have done.”

Biologists will not be returning to that area for maybe the next 30 years with pygmy rabbits, Gallie said. The rabbits need sagebrush, which is their food source, water source and protection. They also need the brush to be three to five feet tall.

It will take at least 10 to 15 years for the sagebrush to start regrowing, he said.

“This literally was like you tore 10 pages of our recovery plan and just threw it out the window,” Gallie said.

Biologists have always known that a large disaster could impact the rabbits, which is why they have been releasing them at multiple sites, he said. It slows down the recovery process, but it prevents them from betting all their rabbits on one location.

“When one area blinks out, there’s enough neighboring areas that can repopulate when the habitat comes back,” Gallie said.

Depending on how next season goes, they may also take some breeding pairs from the wild to help bolster numbers.

“They are still there and untouched and those animals that we have, there is a lot more resting on their tiny shoulders right now,” Gallie said.

BRIDGEPORT — A week after it tore through 350 square miles of Douglas County, the Pearl Hill Fire is nearing full containment.

Work set to begin on Hay Canyon Road in Cashmere

Crews searching for gas leak along Walnut Street, part of road blocked off

A step-by-step guide for the online vaccine appointment process